For all that I adore summer, and the lighter, crisper, juicier sort of cooking that comes with it, the whole thing can quickly become a little fraught. I mean, there's the overbearing heat, which can swiftly turn me from sassy cookstress into wilted puddle, unable to eat anything other than frozen peas. Also, and I guess this is because I am an overthinker, I get really dithery - do I go rice-papery and Japanese or mezze-bowley Greek salad-y or maybe some kind of Moroccan influenced flatbread wrap thing and I can't choose so would it be weird to go Italo-Thai? There's nothing like indecision to make you sweaty. Finally, I sometimes find myself unable to focus on anything approaching practicality, and instead become obsessed with making something sweet....

This was one of those times. 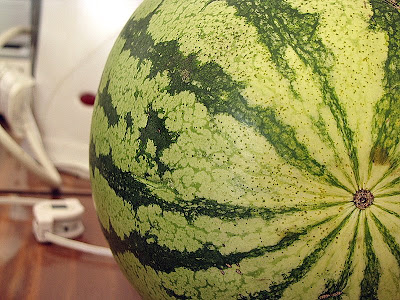 It was, I believe, back in October when I first felt the stirring desire to make watermelon sorbet. Unfortunately watermelons just weren't around. Luckily I am emotionally study enough to wait patiently. They have finally become cheap at the markets and my wish is not only attainable, it's much more seasonally appropriate. 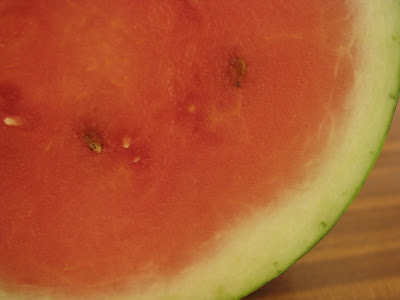 I didn't have a recipe to follow so I scoured the internet, and finally ended up with the following, a pastiche inspired by several sources.


Scoop out all the flesh from inside the watermelon and puree it in a food processor (I had to do it in batches since my watermelon was so huge). A lot of recipes said to strain the juice and discard the flesh but I thought that was kind of a waste of flavour and texture. Unfortunately that meant I had the relatively nightmarish task of picking out the black seeds. You choose what you're up for. Meanwhile, bring the sugar and water to the boil in a pan on the stove, without stirring, and let it bubble away till reduced by half (but not burnt). Once this is cooled, pour it into the watermelon puree, stir, and then tip the lot into an appropriate container and freeze till solid. What you want to do now - and again, not the simplest of tasks - is puree the now-frozen watermelon and syrup in the food processor, which breaks down any inevitable ice crystals. Finally, whisk the egg white till stiff and carefully fold it through the pureed sorbet, then pop it back in the freezer. Don't be put off by the egg white step, you can't taste it at all and it gives the sorbet a great texture. Plus you won't need an ice-pick to scrape out a bowl of sorbet. 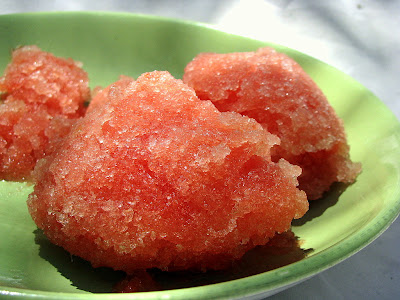 Et voila. Sunset-coloured summery goodness in a bowl is only 24 hours, six bowls, and a sticky food processor away. Don't let that put you off though. Not only is this delicious, it's also very pretty, and not entirely unhealthy. I imagine it would be fairly awesome if you blended it with vodka and quaffed it from margarita glasses. For those of you paddling through winter on the other side of the hemisphere, it is worth waiting for, although this stuff is so good that you might as well pay $16 for a watermelon flown in from Madagascar to make it. Indeed, you might think watermelon in its unadulterated state is quite refreshing enough, thank you, and to a certain -extent it is - the stuff is like solidified vitamin water. But for those times when you just can't leave well alone...


I actually bought two watermelons from the market. Well, I bought them, Tim brought them home...a fair transaction, I feel. For my next trick, I used a sizeable portion of the second one to make this incredible salad from Forever Summer by my (unwitting) muse Nigella Lawson. The combination may sound a little unusual but it works. As if I was going to question Nigella. 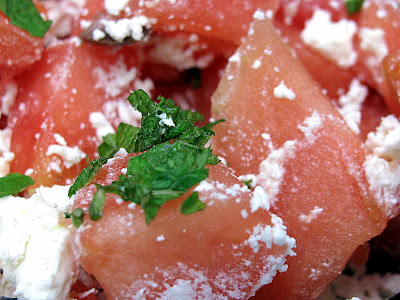 1 small red onion (which I left out because I didn't have one)
2-4 limes depending on juiciness
1.5 kilos ripe watermelon
250g feta cheese
a bunch each of fresh flat-leaf parsely and mint
3-4 T extra virgin olive oil
100g pitted black olives


Peel and halve the red onion and slice finely. Put the slices in a small bowl with the lime juice. Meanwhile, remove the rind from the watermelon and cut into smallish triangular chunks. Either slice or crumble the feta and put them both into a wide shallow serving bowl. Tear up the parsely and chop the mint and sprinkle both over, followed by the onions and their juice, the oil, and the olives. Mix it gently and season with black pepper if desired.

I can't remember what I served this with, but it really was lovely - cold, crisp watermelon against soft, salty cheese and tangy olives.

So, if cultural experience was a cup of soymilk, mine would be running over right now. Firstly, I am so excited because the Wellington Fringe Festival has started and would you believe it - someone is putting on a production of Jonathan Larson's (ie, he who penned RENT) incredible musical Tick...tick...BOOM! This is pretty big stuff for me. Remember, I'm the one who travelled at (surprisingly) great expense to both Levin and Palmerston North to see their local theatre groups' respective productions of RENT. As well as that, I'm seeing the band 'of Montreal' later this month, then in March Tim and I are going to see painfully hip band The Kills (one of them is dating Kate Moss...yes, they're that hip), and as previously mentioned last time, The Kings of Leon and The Who.
.
Finally, and this is where it gets really silly, we are going to see Patti LuPone and Mandy Patinkin in their showcase for the Auckland International Arts Season in July. I mean, this is huge. LuPone is so legendary on Broadway that it hurts. Just Wikipedia her. She originated the role of Eva Peron in Evita and Fantine in Les Miserables, and was most recently making people weep with joy as Rose in the Gypsy revival. She has Tony awards coming out the wahzoo. She's a diva of the first water. I really have no idea what she is doing coming to New Zealand to be honest, but what an opportunity. I'm so all a-flutter it's no wonder I can barely decide what to make for dinner. Oh yeah, and Mandy Patinkin is pretty awesome too. He has been all over Broadway - including starring with Toni Collette and the late Eartha Kitt in Michael John LaChiusa's short-lived but intense The Wild Party - but y'all will probably mostly know him for his role as Inigo "you killed my father, prepare to die" Montoya in The Princess Bride.
.
It is pretty busy in Wellington this weekend. It was Waitangi Day on Friday, and because it was a public holiday Tim was working at Starbucks. Because it is a weekend Tim was also working yesterday and today. Not to make your frappuccino tangy with the taste of guilt or anything, work is good in these uncertain times and I'm happy with my own company...every weekend... Further to this there was the Rugby 7s, an international rugby thing (seriously, that's about as specific as I can make it) which is, I understand, 3% about rugby and 97% an excuse for drunken men to dress up as Borat and beer wenches and invade town at great speed.
.
Next time: will probably be something involving my new favourite toy - a small container of proper sweet smoked paprika. I've been meaning to buy it for ages but price put me off. Luckily for me there was a sale at Kirkcaldie and Staines and I got a tin for a song. Unfortunately the reason it was so cheap was because its best-before date is April. Whatevs, at the rate I'm going I don't think it will be a problem. This stuff is addictive and leaves normal paprika in the dust in terms of flavour. Actually, what is normal paprika but red coloured dust? How have spice companies got away with misleading us so flagrantly for so long?
Posted by hungryandfrozen