Email ThisBlogThis!Share to TwitterShare to FacebookShare to Pinterest
There is something almost blissful about a Sunday where it's raining softly and you have no pressing tasks ahead of you. I'm the first to acknowledge that there's nowt more depressing than a quickly diminishing Sunday afternoon, but a gentle rain and a little slothfulness can counteract that swiftly. Right now I'm casually blogging and shmoozing the internet. Later on I'm going to make some bread rolls - in itself something best done when you have time to knead the dough and let it rise - and shape meatballs which will be simmered in rich tomato sauce. On a Saturday this might be a bit too slow-paced, not exciting enough. But on a rainy Sunday - perfect.

Before I get too nauseatingly earnest...I spent yesterday perambulating between the kitchen and my computer with equal laziness. Not that it was a day wasted - Tim and I were up at 4.50am to get to the dawn service. For those of you who don't have a working knowledge of New Zealand, 25th of April is ANZAC day, a time of remembrance and acknowledgement for those who have participated and lost their lives in war. (The acronym stands for Australia and New Zealand Army Corps.) Although largely associated with WWI, it encompasses all those who have served. I won't go too far into it because you'll be able to tell that I've just reworded stuff from Wikipedia. I got home from the dawn service at about 7am (I had to walk up the hideous hill as the cable car wasn't open) and excitedly anticipated having the whole day ahead of me to do necessary, productive things. Then I fell asleep for three hours.


World War I is of particular interest to me, probably influenced by my mother's own enthusiastic study of this time. I'm not pro-war in the slightest, but the horrors of these times shaped New Zealand irrevocably and I am lucky enough to have visited several areas of Belgium and Northern France where young Kiwi men - some pathetically young - lie buried in graves that bear row upon unfathomable row of white crosses.
.
Anzac biscuits are part of New Zealand baking tradition, not exclusive to any particular day, but what with the power of suggestion and all I decided yesterday, once I'd come to from my nap, would be as good a day to make some as any. The accepted story behind these biscuits is that Kiwi women sent them over to the troops in WWI because they were economic to make and kept well - but I don't know for sure and again, one doesn't want to appear to have plundered Wikipedia for information. Frankly, most of the ones you can buy in shops are really not that nice - all hard and mealy and undelicious. Much better made at home, and a gratifyingly buttery way to feel a connection with my country.
. 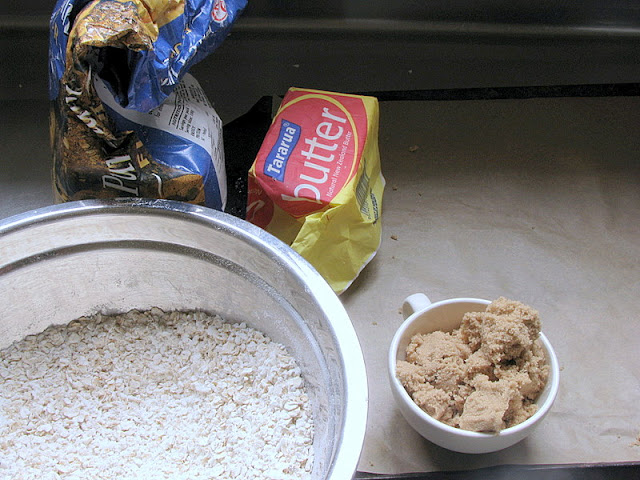 ANZAC Bicuits (never, ever 'cookies'.)
.
As every recipe you will ever find is basically the same, I don't feel the need to attribute this to anyone. I did, however, replace the normal white sugar with brown and up the butter slightly. And it produced a superior biscuit.
.
150g butter
1 cup brown sugar
1 tablespoon golden syrup
1 cup plain flour
2 cups rolled oats
1 cup dessicated coconut
1 teaspoon baking soda Set the oven to 180 C/350F. Melt the butter, sugar, and golden syrup together gently in a pan over a low heat. Once it has formed a delicious caramelly puddle, stir in the dry ingredients. Dissolve the baking soda in a little hot water and mix it in quicky and thoroughly. Form mixture into small balls on a baking tray and carefully flatten with a fork (you may need to squish them together if the balls fall apart). Bake for 12 minutes, remove from the oven and allow to cool. 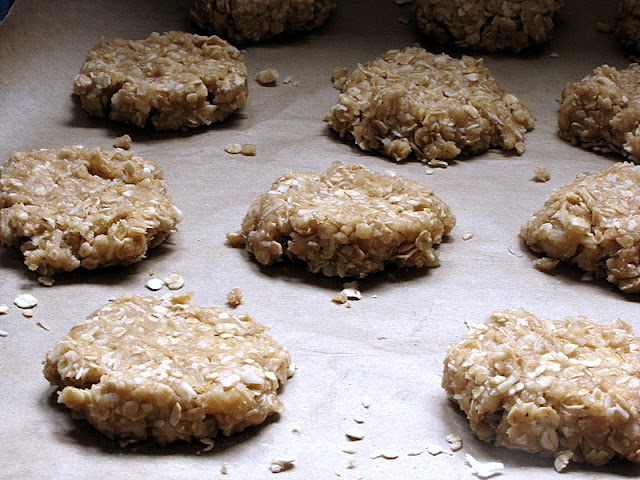 Above: Uncooked Anzac biscuits, ready for the oven. This recipe should make about 30. Having said that I ate a lot of mixture. Maybe it makes more than 30. You'd think I'd learn. 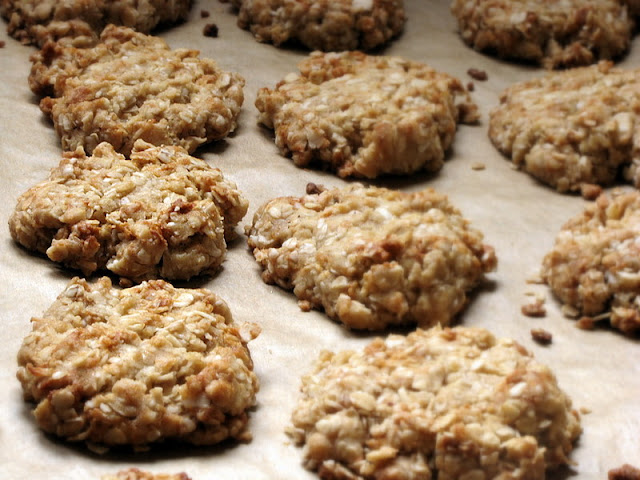 Once baked, they are far superior to anything you'll buy from a shop. Buttery, oaty, a little crisp and - as I said last Anzac day - "chewy with tradition", they are like apple crumble topping in cookie form. A seductive concept, yes? There's little fancy or fussy about these biscuits but they're child's play to make and considerably economical as far as baking goes.

Earlier this week Tim and I were fortunate enough to see Sylvie Guillem and Russell Maliphant in Push, a show that has been touring worldwide and made its way to Wellington. Once again, if you want to know the history of Sylvie Guillem's life, Wikipedia will do a better job that I can (I don't mean to sound all caustic, it just puts me off when blatant chunks of information that came from some site or other on peoples' blogs appear sandwiched between the normal writing.) What you do need to know is that she is a legend in her field - dance - and widely considered one of the most brilliant dancers of modern times. She's not young - for a dancer that is - and being as New Zealand is by and large geographically estranged from where anything exciting happens, it was an utter privelege to have the opportunity to see her.
.
Guillem was so...limber. Like a flame, flickering across the stage. It was wonderful to watch someone utterly in control of their body, dancing with grace and ease and power. Maliphant was something of a revelation as well - and the two of them together were just faint-makingly beautiful. In the final piece of the programme they danced together as though there was a magnet connecting their bodies - Guillem would fling herself fearlessly at Maliphant and somehow land on his shoulder with one leg in the air. Not a hint of exhalation or exhaustion from either of them. The whole thing was just...exquisite. Celebrity alert - we saw the gorgeous Loren Horsley, (from Eagle vs Shark with Jemaine Clement), and - somewhat unexpectedly - a man we were quite convinced was Danyon Loader, Olympic medal-winning swimmer. Also present were a lot of ballet-dancery type girls who reminded me that I will never be a ballerina. Nevertheless, I can still be someone who appreciates and loves dance, and someone who dances round the bedroom with my iPod on...someone who arabesques while drying and putting away dishes and who plies to pick up something off the floor...
.
Finally: I still haven't kicked this dirty cough that I have. It's croupy, and worse from 6pm onwards - I end up coughing nonstop at about 2am, and my poor tired brain can't keep up with it. Anyone have any ideas? I'd rather be a hippy and not get antibiotics if I can help it, and I know your grandmother had some kind of natural remedy you can share with me. For what it's worth, I've been drinking my body weight in fresh ginger and lemon tea and have eaten a lot of garlic...any ideas muchly appreciated!
.
Next time: I did some homemade beetroot ravioli last night, and will probably bake something frivolous between now and whenever I blog next. Can you believe April is nearly done? Coming up on the calendar- The Wellington Food Show, which I am ridiculously excited about and shall be blogging about with vigour. We've managed to secure tickets to see charming comedian Dylan Moran on the 11th and the band Okkervil River on the 15th, and then on the 19th it's our graduation. Busy times ahead...
.
New stuff! After every blog I'll list three songs that came on shuffle while writing this blog. Why? Mostly narcissism probably, but also because I love music with a dark passion and I like the idea of possibly broadening your horizons, providing a little insight into who I am, or at the very least getting The Final Countdown stuck in your head.
.
1: Let Me Drown - Brian D'Arcy James and Idina Menzel - The Wild Party Original Cast Recording
2: Mad Tom of Bedlam - Jolie Holland - Escondida
3: Farmer John - Neil Young - Weld
Posted by hungryandfrozen