Email ThisBlogThis!Share to TwitterShare to FacebookShare to Pinterest
I really don't eat a lot of kaimoana, which is a bit stupid since I live in a long thin country surrounded by healthy salt water. The fish are plentiful. With the weight of a thousand magazine articles about how Omega-3 will solve all your problems and also a feeling that I was some kind of useless lover-of-food if I wasn't cooking fish occasionally, I went to the counter at Moore Wilson's and confidently pointed at a slab of ruby-red tuna. 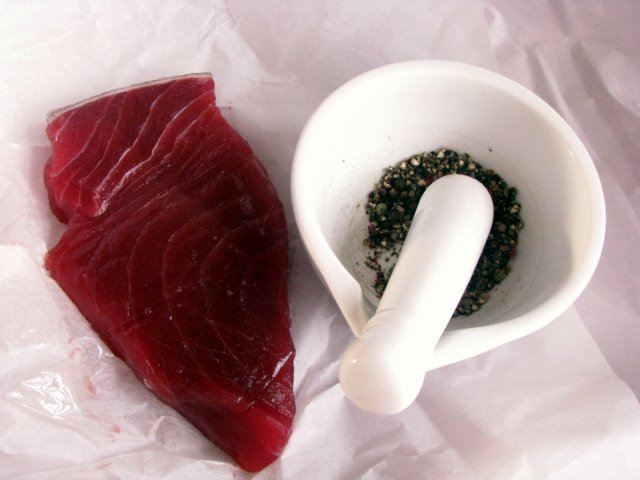 I was inspired by a recipe that I read on Lori's Lipsmacking Goodness for soba noodles with salad, the particular eye-catcher being the peanut sauce that went with it. The further I read into the list of ingredients the hungrier I became and I felt like the salty, chilli flavours in the sauce, plus its richness, could stand up well against the heavy, oily tuna. After flicking through a couple of my Nigella Lawson cookbooks I decided to coat the tuna in a rubbly mix of roughly crushed peppercorns before searing them in a hot, hot pan, figuring that the sharp heat of the pepper would provide a further contrast to the fish beneath it. 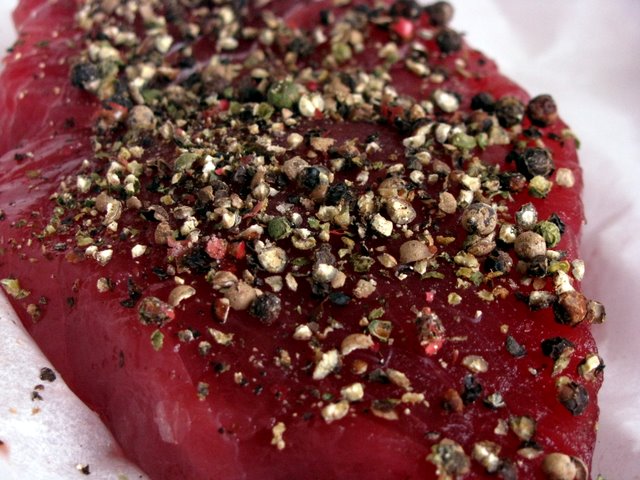 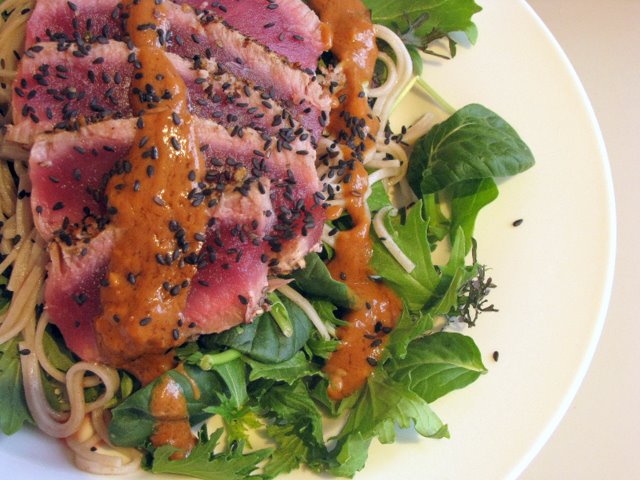 Thanks to Lori for the peanut sauce recipe and inspiration!

Roughly crush the peppercorns in a pestle and mortar. Do this carefully, as the little suckers will ping out all over the place. Sprinkle half of them over one side of the tuna, pressing them in gently. Meanwhile, heat a nonstick pan till it's good and hot. Slide the tuna, pepper side down, onto the hot pan and let it cook for a couple of minutes. Sprinkle the rest of the pepper on the other side of the tuna. Once you're satisfied with how cooked it is, carefully flip the tuna over using a couple of spatulas or a fishslice or something, and sear on the other side. Remove to a plate and cover in tinfoil. Cook the soba noodles in plenty of boiling water - this shouldn't take long.

Whisk all the ingredients together. This makes quite a lot - I halved it. I also had no Hoisin sauce so I left it out, and added a little garlic instead. 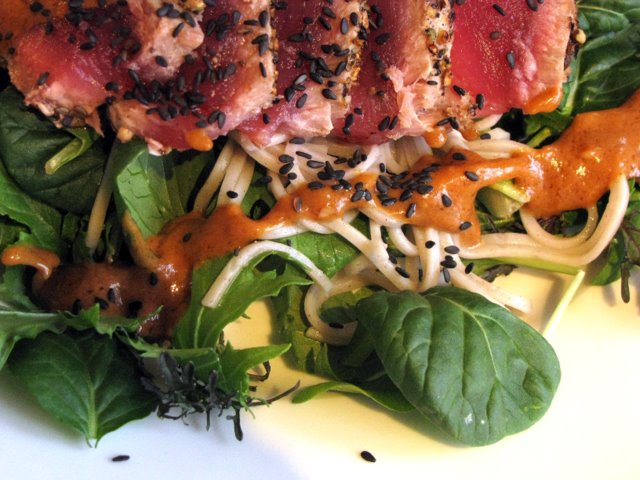 Feeling as though Nigella, across the other side of the world, would instinctively shudder without knowing why if I overcooked the tuna, I made sure to keep it fairly rare. With its red interior and seared crust it may resemble a steak, and certainly has the meatiness, but its texture is a lot softer and it is definitely richer than any of its four-legged counterparts. As I'd hoped, the tuna, the hot pepper, and the nutty sauce all worked together seriously well. The leafy, noodly base gave further, completely welcome textural contrast without competing too much flavourwise.

The sauce was a total revelation - thick, rich, amazingly nutty and spicy and delicious. I imagine it would be amazing poured over any number of other things - beef skewers, tofu, plain noodles, rice, or as a dipping sauce for sliced vegetables, spring rolls, rice paper rolls - seriously, it was wonderful stuff. Thank you Lori! Will I be cooking more fish? I guess I'll try. The tuna ended up being pretty expensive but it was delicious - light years apart from the stringy, grey chunks of fish that you get in cans which are actually really expensive themselves. What's with that? Nigella has so many recipes that I want to try, which is a good push in the direction of the fish counter. As long as I don't have to look at the crayfish in their tank. Call me a hypocrite, I mean I eat meat, but the sight of those knock-kneed, sad-eyed crowded creatures makes me want to fall on the floor and sob. It's true. 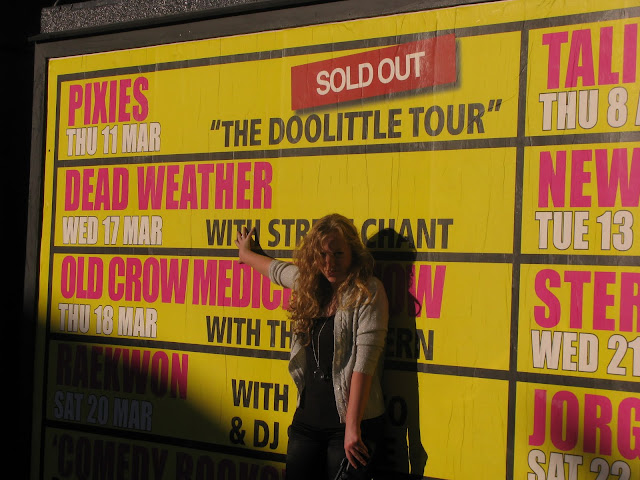 Speaking of, on Wednesday night Tim and I had the massively good fortune to see the Dead Weather live at the Powerstation in Auckland, afterwards I was wanting to fall to the floor and sob at Jack White's BRILLIANCE. Please don't expect this to be a definitive review - I feel like the more I talk about this gig the less I really say. What a line up - Queens of the Stone Age's Dean Fertita, Jack Lawrence of the Raconteurs and Alison Mosshart from the Kills comprise the rest of the band and were, you know, really good. But as the song goes, I only have eyes for yooooooujackwhite. Friends, he was sublime. The Dead Weather's music - heavy, sludgy, intense and metaphorical - sounded wonderful in the venue, particularly I Cut Like A Buffalo. Tim and I managed to negotiate a patch pretty near the front of the stage, but the crowd wasn't the most fun to be in, especially these girls on our right who may or may not have been on P, judging by the way they were dancing so aggressively in such a tiny space. Narrowed eyes and a "huh?" expression don't go very far in the dark. They continued all night, inciting more and more hatred in me as their heads swung round. The girl on the left continuously tried to push in front of me - we were so tightly packed that I have no idea where she thought she might end up. Apologies for getting caught up in the negatives but it was irritating to be in the presence of such an exciting band and for everyone to be so focussed on themselves. Am I secretly a naive yet curmudgeonly old man? Anyway! 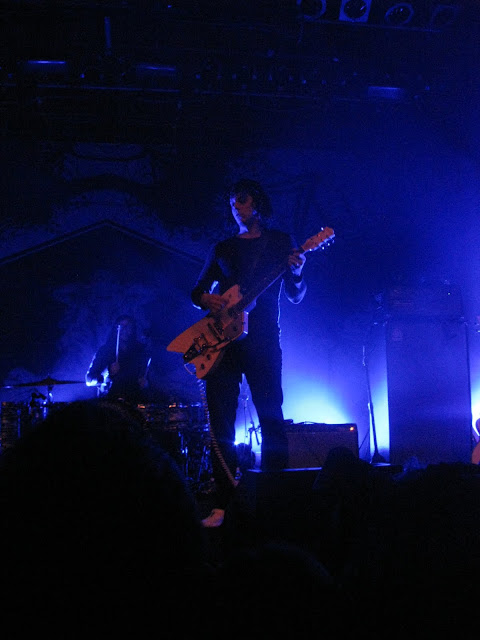 Stripped of his eyebrow-waggling White Stripes persona, Jack White was as enigmatic as ever and completely amazing as a musician - switching from drums, to guitar and vocals and back to drums again. As I said the crowd was very full-on and afterwards my neck was actually twitching - I think I got carpal spine just from trying to stay upright in the seething mass of overexcited teens. Once it was all over, Tim and I, with no shame whatsoever, waited as close to the stage door as possible (flipping miles away, in case you're wondering, but the security were nice guys and let us stay) and waved at Jack White as he was driven away in a large white van. He grinned, knocked on the window and waved back. It was a stupidly exciting moment considering what it amounted to really. I know I go on about lots of different things but Tim and I really, really love the White Stripes and all Jack White's inspired tangents so to get the chance to see him performing again was incredibly special. Hence the dorky photo above outside the Powerstation.

Billy Porter, King Of The World, from At the Corner of Broadway and Soul. Unfortunately no youtube video exists of him executing this song but you can listen to it at that link (it's worth it - the ending is amazing!) I have recently reconnected with the astounding voice this man possesses. Watch him sing Beauty School Drop Out. Seriously. I think he discovered a new octave.

David Dallas, Big Time, the gorgeously mellow single from his album Something Awesome. Along with a whole bunch of other New Zealand artists, Dallas is at SXSW in Austin, Texas, and hopefully his sound resonates with that audience because - for what it's worth coming from me - it feels like he could go so far. Not just saying this because I had a crush on him back when the remix for Scribe's Not Many came out years ago.