Email ThisBlogThis!Share to TwitterShare to FacebookShare to Pinterest
I've been feeling sorta dispirited the last couple of months, a bit "mehhhh", like time is sliding by so fast and I haven't been able to get a grip on the days and suddenly it's August and, I don't know, maybe this strikes a chord or maybe it makes no sense whatsoever.

I think, hypothesizingingly, this could have something to do with the fact that I have made almost no stews or casseroles or soups this winter. Nigella's Slow Food chapter in that seminal text How To Eat has been unstained with ingredients, there's been no brisket becoming meltingly soft as it cooks in stock over time, forcing you to wait for it, or kumara simmering with spices and all those other romantic things that you think about when you are, well, hungry and frozen. I guess I've just been busier lately, had more going on...anyway I'm trying. I made Nigella's Beef with Stout and Prunes for the first time in more than a year over the weekend and it was SO good. Luckily in Wellington it's winter for about 85% of the year anyway so even though it's nearly September, there's still plenty of scope for making up for lost time foodwise.

Me: I've decided to use tofu instead of beef.
Tim: Woohoo..?

Luckily, Tim does like tofu. Actually, I take back that 'luckily'. It's not some great magnanimous concession to like tofu, the sort of thing you discuss later with starry eyes ("he doesn't complain when I cook tofu and he puts the toilet seat down! What a catch!") It ain't luck. Tofu just tastes good. At least, when I cook it. Witness: tofu balls! 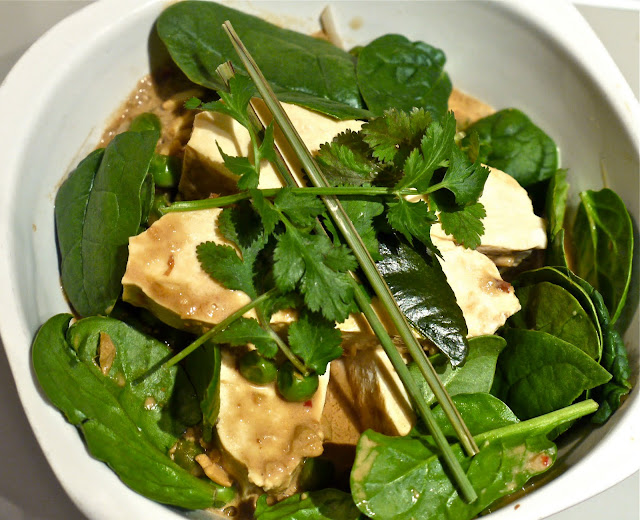 This not-beef Penang Curry was a recipe I found in an old Cuisine magazine - July 2004 - and while using tofu makes it significantly faster, it still has that involved, pestle-and-mortar, simmer-till-tender vibe going on. The list of ingredients might look a bit stressful, and I guess I'm lucky I live in Wellington where stuff is a bit nearer to my fingertips, but it's not so bad -suss out your local markets, check out the local Asian Supermarkets, explore your neighbourhood or even the next 'hood over...or just improvise with what you have. Shallots can become spring onions, dried chillis can be fresh glossy ones, and the gently fragrant galangal of my blog post title could just be plain ginger...but you might want to call it "Penang-ish" curry instead, I guess I should, too considering how much I've changed it up already. 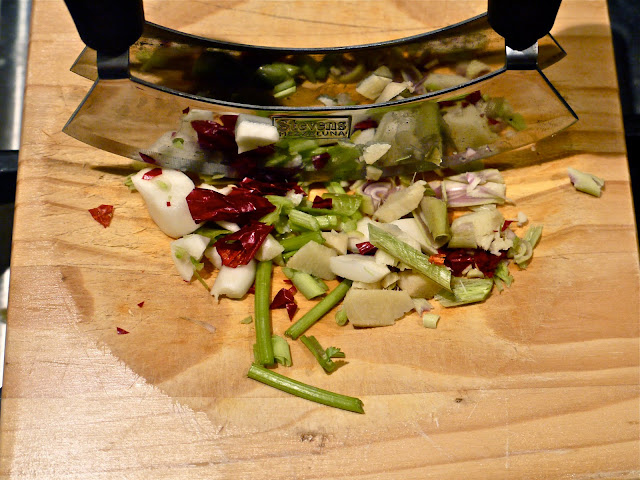 Either blitz everything in a food processor, adding the peanuts last and pulsing to a roughly textured mixture, or go hands-on with a pestle and mortar. I did the latter, not because I'm all superior but because sometimes in my backwards mind, bashing away at herbs with a ceramic thingy is easier on my nerves than washing the food processor after using it. Either way, refrigerate until you need it.

2 square 'fillets' of fresh, firm tofu, sliced (or as much as you want, really)
1 can coconut milk
2 tablespoons grated palm sugar
3 tablespoons fish sauce (I used soy sauce instead - you could too, to make it vegan)
2 cups loosely packed spinach leaves
4 kaffir lime leaves, torn in half
1 small, hot chilli, cut in half
2 tablespoons Thai basil leaves (didn't have any of this)
5cm fresh ginger, peeled and cut into thin batons (I just used more galangal)
1/4 cup coriander leaves

Bring half the coconut milk to the boil in a heavy saucepan. Reduce heat and add the curry paste, stirring as it cooks. Add the palm sugar, the fish sauce, and the tofu slices. Simmer for a few minutes, then stir in the spinach, lime leaves, galangal, chilli and basil. Serve in bowls with the coriander on top, over hot rice. This served two, but all you'd need is more tofu and more coconut milk to feed four. 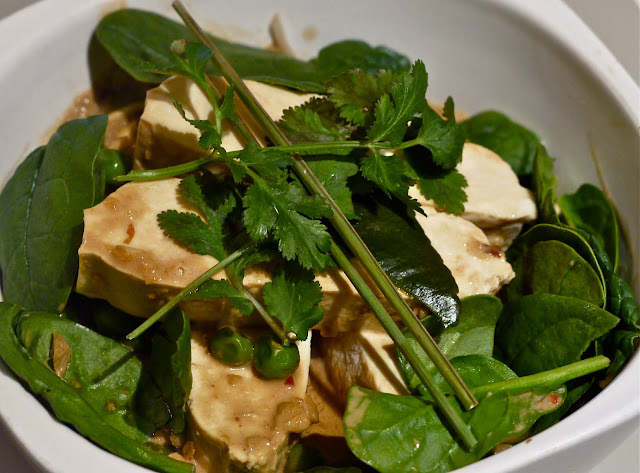 Soul-restoring stuff - the gentle coconut flavour harshed up by the roundhouse kicky of the chilli, fragrant with the delicately gingery galangal, the incredibly good-smelling lemongrass and lime leaves and the coriander, all of which is absorbed into the fresh, delicious tofu. If you like what you see, maybe try making triple the curry paste, covering it with some oil and refrigerating it for the next time you need some midwinter zing.

I bought Liz Callaway's Passage of Time online recently and it took soooo long to arrive, finally landing on my desk last week. Have been thrashing it ever since. Youtube is painfully lacking in Liz Callaway tracks but here's a recording of her singing Make Someone Happy/Something Wonderful from this album - devastatingly good stuff.

Speaking of devastatingly good, Neil Young's Tonight's The Night from the album of the same name. I heard a song from this album on the radio over the weekend and it reminded me how much I love this collection of songs. My favourite album of his, hands-down.

Still speaking of devastatingly good, check out the late, wonderful Lena Horne's take on Rocky Racoon with the musical assistance of Gabor Szabo. Over on our blog 100s and 1000s, Tim and I shared our thoughts on some of the good Beatles covers out there, and Mum commented asking if anyone had every covered Rocky Racoon. Well here it is. And I only wish we'd found it sooner. Cheers Mum!
____________________________________________
Next time: Apart from wanting to slow down and make more old-timey casseroles, I've also had the urge to make some cookies but haven't had the time or energy. When you don't have the energy for cookies you know it's time for some stern self-talk. Find the energy, Laura! Make the time!
Posted by hungryandfrozen