better get that dough sister

Email ThisBlogThis!Share to TwitterShare to FacebookShare to Pinterest
Not all food blogs are created equal. Some get abandoned, their last update around the May 2009 mark, often saying something like "I've been so busy lately..." Some have light pink text on a dark pink background, briskly searing the eyeballs like marinated tofu laid in a hot pan. Some get book deals (pick me!) And some are resources that continuously inspire with their fresh perspective, genuine wordsmithery, love of food, and crack up humour. Like Hannah's blog, Wayfaring Chocolate. Here's yet another recipe via her writing that I've appropriated cuz it looked so good. 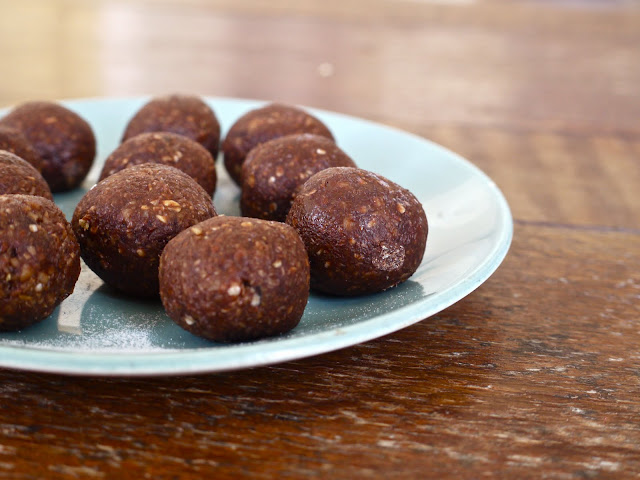 Although maybe I should say sounded so good. Vegan Cookie Dough Truffles sounds wildly delicious, at least to me. But. Because I gave my almonds and brazils a once-over in a hot pan, and they hold their heat, the chocolate melted and dispersed through the mixture in the food processor. Instead of bordering-on-adorable chocolate studded balls of cookie dough like Hannah's, mine were...uniformly brown. After eating one I moved on pretty fast though. They really have a cookie dough flavour, but in a rich, textured way as opposed to the more instantaneous sugar rush of that which this imitates. If you were feeling up for it (and possibly if you're serving them to guests) you could actually dip these or drizzle them with dark chocolate. And if you're feeling super up for it, you could probably chop these up and stir them through vanilla ice cream. But they taste mighty amazing unadorned, whether or not you find them attractive. 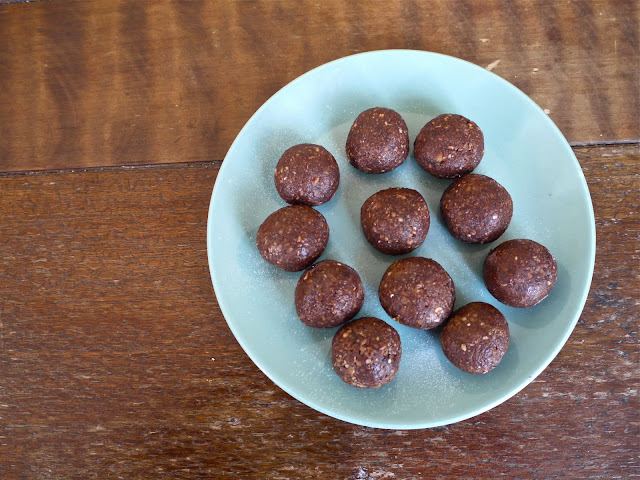 I actually tried dusting them with this vanilla sugar I got given for Christmas but by the time I got the camera sorted the sugar had kind of absorbed into the surface. So I moved on.

With thanks to Hannah from Wayfaring Chocolate

2/3 cup almonds
2/3 cup cashews (I used brazil nuts which I figured gave a similar texture)
2/3 cup oatbran (blitz oats in the blender to make this if you haven't got it)
1/4 teaspoon (or more) ground cinnamon
Pinch salt
1/4 cup agave nectar (I used golden syrup)
2 teaspoons vanilla extract
About 50 grams dark chocolate (has to be dark stuff to make this vegan, but do as you please) roughly chopped
They taste absolutely wonderful, which is why I present them to you without any fear of what they look like. The nuts themselves give the truffles luscious body and softness (and in fact they'll probably do the same for your hair) their texture giving an almost-chocolatey bite to complement the actual chocolate. I know oatbran doesn't sound so fun but it gives general bulk to the truffle mix and whatever dusty oat-ness is there disappears into the rest of the ingredients, as well as adding to the general, but genuine, cookie dough stylings of this recipe. Don't leave out the salt, it means whatever flavour's there hits you that much faster, as well as hinting at that salted-caramel thing by bringing out the best of whatever form of syrup you end up using. 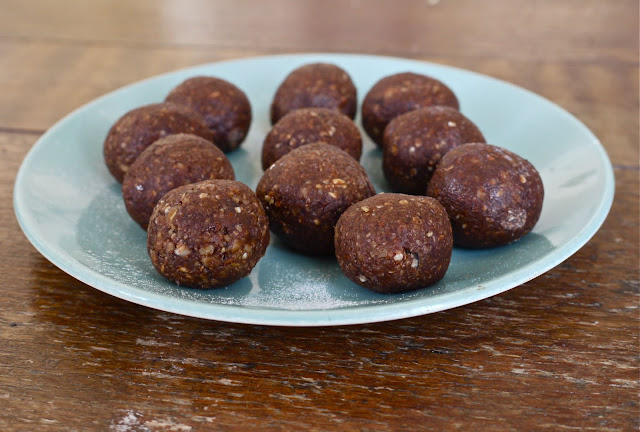 These are fantastic when you arrive home seriously hungry (or as a hasty breakfast on the run if it comes to it - all those oats and nuts keep you going for a while) and obviously keep just fine for ages, stashed in the freezer. If you're the kind of person who makes and freezes meatballs for a later date (and I am, very occasionally, that person) then...make sure you label things correctly. Biting into a frozen meatball while simmering these beauties in tomato sauce would be a grim outcome for such efficiency.

At this point in three weeks, Tim and I will be in London! We've still got a few nights' accommodation to book there but apart from that we're suspiciously organised. And, loving the sugary sweet names of the hostels we're staying at in Berlin and Warsaw respectively: The Helter Skelter and Oki Doki. A bit like how I like to make stupid words like "ham" when I'm playing Scrabble rather than trying to win, I can't lie that their respective names influenced me to want to stay there.

Yesterday Tim and I spent most of the day on the waterfront at the Homegrown festival, the first one I've ever attended instead of working at, and the first time it has rained on the day. Wasn't a thing though, as the bands were performing in big sturdy tents, and we mostly loitered between two in particular. Took in such excellence as Coco Solid, PNC, The Phoenix Foundation, The Clean, Nesian Mystik (I'm pretty sure It's On could've been released yesterday instead of 2002 and still be as smooth as freshly churned butter) ending the festival with a loud, aggressively athletic and seriously fun set from Die!Die!Die!.

Title via: Even though I never actually once liked the music of Pink, Mya, or Christina Aguilera (Lil Kim, I couldn't say, haven't heard enough) somehow the whole was greater than the sum of its parts and I still have a fondness for their melisma-tastic take on Lady Marmalade for the film Moulin Rouge (possibly because at one point in time I watched this film at least once a week. Possibly also the amazing Missy Elliot's work on it - I distinctly remember driving somewhere with Dad one time, and him turning it up on the radio and telling me to listen to the production values.) And let's take some time to appreciate the original by Labelle, who wore costumes no less astonishing.
_______________________________________________________

After Homegrown we went back out to Happy to catch the back end of a quadruple bill raising money for Christchurch, namely Brains and Mammal Airlines. We'd never seen Brains before but liked them a lot, lots of dark moodiness and full-on drums and I'm very tired so that's as far as I'll try to go describing what we saw. Go listen and make up your own mind here.

Next time: saw this recipe for mango chutney after it was linked to on Twitter, and as luck would have it, mangoes were going reasonably cheap at the market today and as such, I'm pretty sure this is up next.
Posted by hungryandfrozen