take back the cake, burn the shoes and boil the rice

Email ThisBlogThis!Share to TwitterShare to FacebookShare to Pinterest
While frantically making royal icing at 7.00am yesterday, sending clouds of icing sugar into both the air and my eyebrows with each rotation my whisk made around the bowl; spreading it over layers of cake and massaging sprinkles into a uniform layer across its still-wet surface, it was hard to imagine that soon there'd be events that would require more attention than the one at hand. 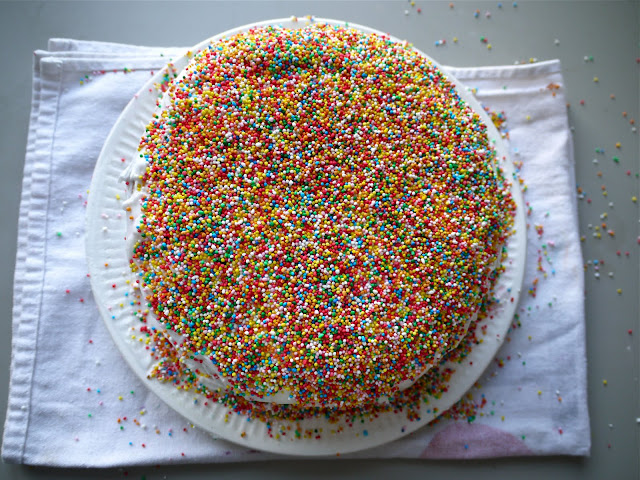 However life, in the way it does to everyone every day, presented me with a whole lot of other things to take in. 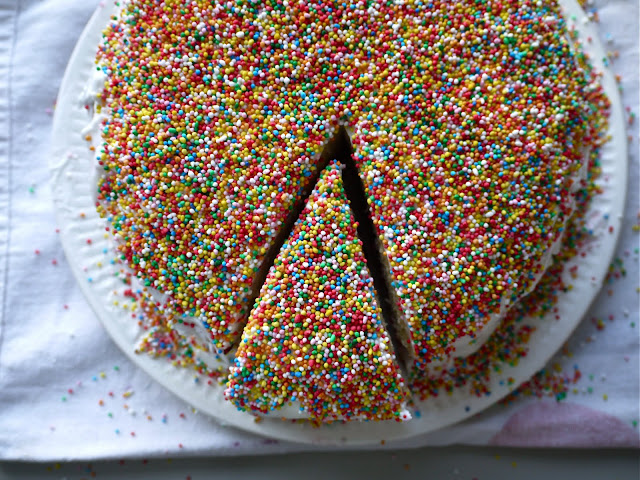 Yesterday I found out that Nancy Wake had died, aged 98. I grew up with the proud knowledge that I was related to her down the line, but also with a more general respect for all that she'd achieved. I won't pass wikipedia content off as my own here, instead I definitely recommend reading a summary of her life during WWII here. Where it says she was descended from Pourewa and Charles Cossell - those are my same ancestors, just a few generations back, of course.

A significant day in my life was when I met Nancy Wake in London in 2005 - sort of by chance, although you don't just run into someone in the Royal Star and Garter Home for the ex-Service Community. It was very lucky that I was able to go in and visit her, as I was told at reception that they have a no-visitors policy unless Wake herself had cleared it first. However, my sincere story (from New Zealand, related, happy to leave if it doesn't suit, just thought since this was my one chance, etc) randomly got the thumbs up and suddenly I was wearing a visitor's sticker and being escorted down a hallway to her room. I hardly remember what happened to be honest, apart from small details - she was wearing red lipstick and red nailpolish, there was a handwritten Christmas card from Prince Charles and his sons pinned to the wall, and I'd (a little naively) brought her a gift of homemade fudge, to which she said sharply "I can't eat any of that stuff." Tim was there too - it was right when we first started 'going out' or whatever, he loitered outside but with her permission snapped a photo of the two of us together. Nancy Wake was a hugely inspirational person (quoted as saying "I've never been afraid in my life", something that seems to have failed to reach my share of our DNA, as has her bicycling ability) and I was very sad to hear of her death. But, I also feel lucky to have had moment, though a slightly surreal moment, with her. 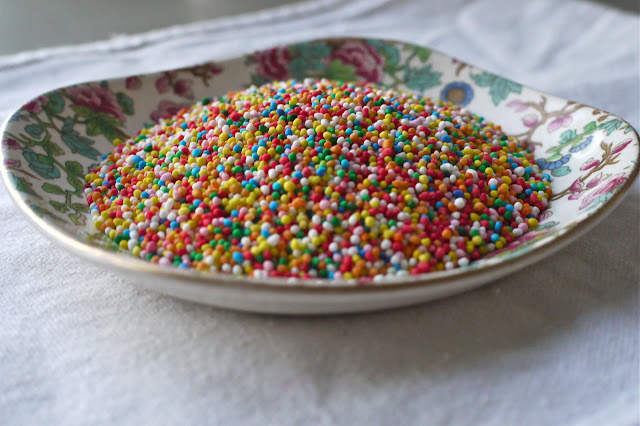 I've also been reading heaps of accounts of the rioting in London via Twitter and news websites. Hope everyone I know over there - and the list does grow the more I think about it - is doing okay and staying safe. Actually I just hope everyone is staying safe and that it somehow stops really soon. Scary, sad times.

It's almost like my body or soul, whichever is responsible for this kind of carry-on, instinctively knew I'd need cake at some point. I made this on Sunday, not for any particular reason but just because it felt like something I needed to do, in my heart. Maybe not so much for my heart, some might say, but I tend to believe my body's food-related instincts are always accurate. Firstly, I knew I wanted to make a big cake, secondly, I had a vision of a cake entirely covered in hundreds and thousands - this turned out to be way too difficult and so I compromised with just a rainbow-dotted top - and thirdly, I wanted the juicy acerbic squish of blackberries, which I already had in my freezer, against the buttery richness of vanilla and white chocolate.

Sometimes cakes and such will spring into my mind, fully-formed like this - in which case if I've got the means I just go with it. I'm glad I did, because this isn't so much a cake as an accomplishment, the sort of thing you want to put on your CV. (Actually, this cake should go on your CV, the one I've made here one only looks complicated.)

White Chocolate Layer Cake with Blackberries and Hundreds and Thousands

Adapted liberally from a basic cake recipe of Nigella Lawson's that appears in some form in nearly all her books.

Filling:
Jam
Lots of blackberries (frozen is fine, but thaw them in a sieve over a bowl - they have SO much juice in them)
Royal icing:
2 egg whites
Icing sugar
vanilla extract/paste
Hundreds and Thousands (about a small container full, depending on your capacity) 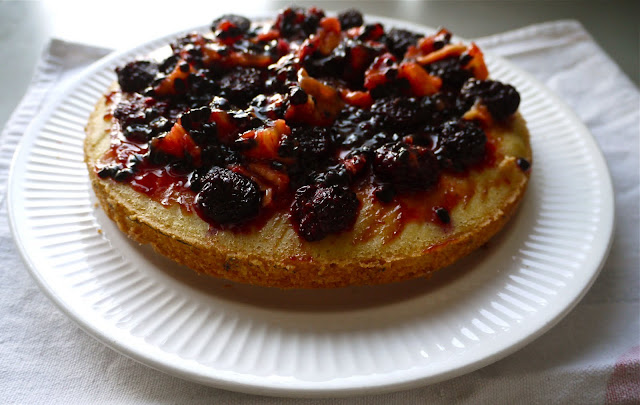 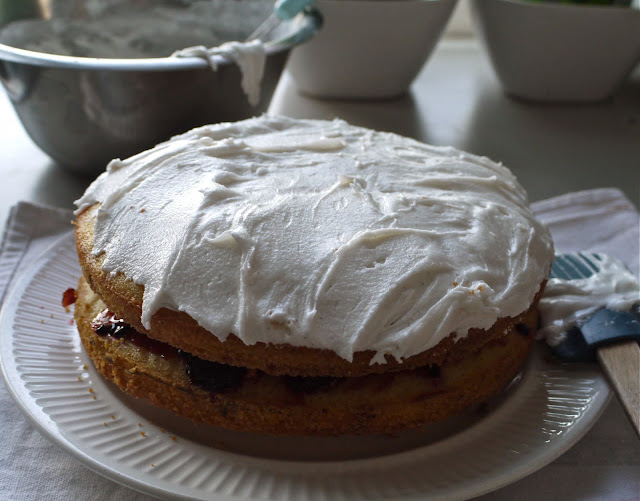 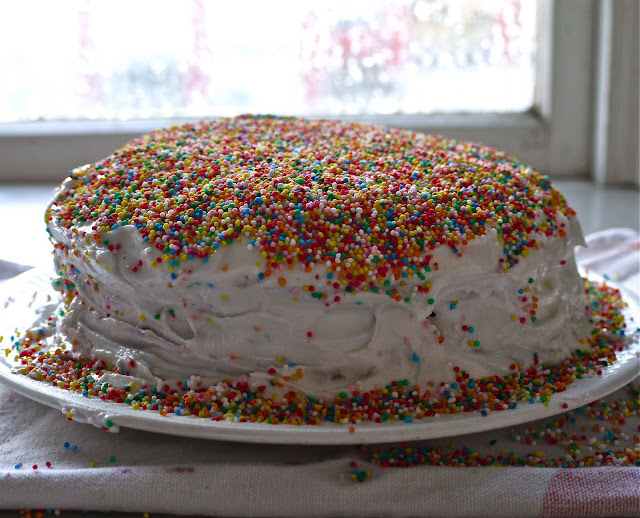 This cake recipe is reliable and easy, although admittedly my layers didn't rise very high, I think this is because the wooden spoon I used to make them didn't beat as much air in as a cake mixer would. No matter. It's tender and buttery and good on its own; when paired with sharp berries, thick sweet icing steeped in vanilla, welcome lumps of white chocolate and the rainbow crunch of hundreds and thousands, not to mention more cake, it's pretty damn flabbergasting.

Luckily for you, there are many, many options if the stars don't align for you ingredients-wise.
Here's a few of them! (Tell us, Susan!) 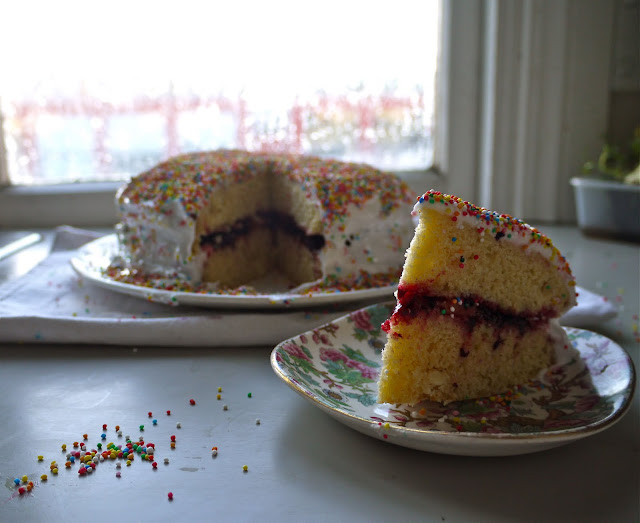 Be warned: sprinkles only need the barest encouragement to bounce all over the place and off your slice of cake and onto the floor.

Title via: Getting Married Today, from a musical that I just can't get sick of, not that I'm trying, Stephen Sondheim's Company. I once had a dream that I was performing this song most adequately in a local theatre production, if someone would like to make this happen in real life, that would be grand. I recommend first, original Broadway cast member Beth Howland; then 2006 revival cast member Heather Laws' admirable version, and finally the always wonderful Alice Ripley performing it with her usual commitment in Washington in 2002.
________________________________________________________
Music lately:
New music from Tourettes is always good news to me.

The Go! Team, Ladyflash. This song is so cheery that some of it's gotta rub off if you listen to it enough.

Next time: something a little more erring on the side of sensible. But not too sensible. It probably won't be very sensible at all, let's face it.
Posted by hungryandfrozen