how do you measure, measure a year?

Email ThisBlogThis!Share to TwitterShare to FacebookShare to Pinterest
...or four years, even. HungryandFrozen, this very blog that you are granting the power of your eyeballs to, is now four years old! How significant! To me! There's no "it's our birthday but you get the presents" happening here because I only just remembered a few days ago, and I'm not going to write anything profound that also sums up my whole life up until this point - but kindly let me indulge in some hazy-eyed pridefulness (I warn you, I'm writing this very late at night, so I may run into lengthy hyperbole even more so than usual.) HungryandFrozen has grown and changed and thankfully improved with me through the years, and become an important, central part of my life. Which might be a weird thing to say about a website, but consider that it has allowed me...

- to document my life
- to channel the millions of ideas flying in my head into something so said head doesn't fall off from the pressure build-up
- to help the village I grew up in
- to get free accommodation with strangers in Oxford (thanks again, Kate!)
- to make some of the best new friends ever (the kind you feel instantly able to tell all your secrets to and in turn never whisper theirs to anyone)
- to be on the cover of a magazine in all my resolutely unphotogenic glory
- to get a radio interview
- to be nominated for (but not win, sniffle) cool awards
- to attempt to become a kind of Ruth Reichl-esque double act with Tim while reviewing cafes for a national paper
- to learn from others' writing and photography
- to be certain that I'd be kindred spirits with certain other faraway food bloggers
- and to force my dreams upon you all in the hopes that if I say them enough and work hard enough they've just got to come true eventually.

And to create many a recklessly long and indulgently unedited sentence. It took me a while for the format to settle into this happy little rut with strict, unchanging elements: long-form, title quoting/mangling a song I like (or occasionally an exceptional TV/movie quote), recipe included, but never just a recipe, always with life and thoughts thrown round it like a cape - and it's not one I plan on straying from.

Let me tell you a story: Tim and I first moved to Wellington in early 2006 and we had very little money (or things - for about three months our bed was two single mattresses pushed together on the floor, with all the softness and back support of a weet-bix.) Tim forwent his insulin (kidding! I'm kidding so hard I can't even get to the end of the sentence before I interrupt to reassure you it's not true) so I could buy Nigella Lawson's seminal text How To Eat. I loved cooking so much and she had a way of presenting every meal, no matter how simple, as if it was something exciting for you to be doing for yourself. Like that's how you deserved to eat. Again, with the no-money thing, if I ever cooked a recipe from her book it felt like I should photograph it, because it was such a big exciting deal, every dinner an occasion. I guess that's where the whole documentation of what I eat vibe came about. Not a great story, but...it's true. And now, here's a cake. 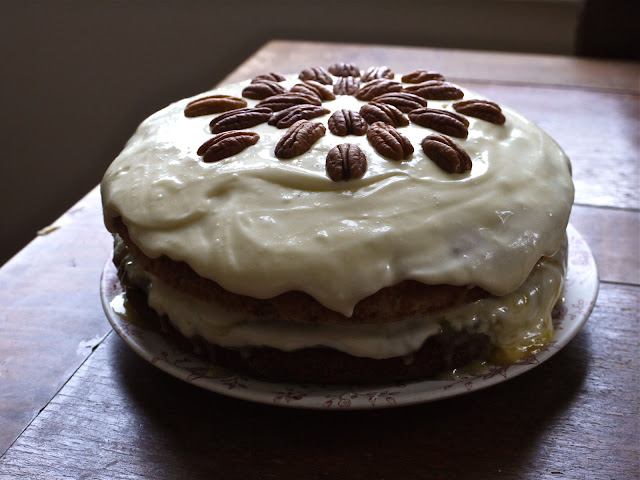 This cake has nothing to do with my blog being four years old, it's just a coincidence. It's also a Hummingbird Cake, from the American South, where the food is good. 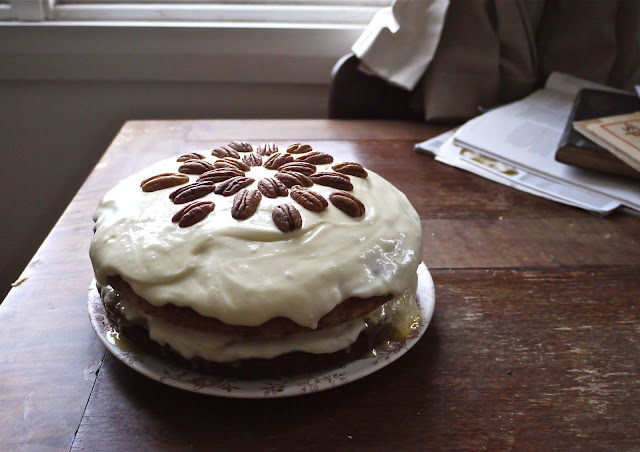 I didn't bother shifting the mess in the background of this photo, because I was lazy, but it was symbolic of the mess this cake itself caused - while stirring up the cream cheese icing I moved my spoon a little too sharply through the mixture and ended up shifting a dust-cloud of icing sugar all over myself. I was wearing a wooly jumper at the time and the icing sugar gleefully burrowed into its fibres. But still I caked on.

How this came about was that Tim brought home some uneaten bananas from his work. I could've turned them into modest muffins or banana bread, but uninspired by those this time round I turned instead to Hummingbird cake. What is this? Imagine banana cake...but with pineapple in it too, studded with pecans, double-layered and thickly painted with cream cheese icing. It's like a really well-accessorised banana cake (the pecans would so be the earrings) (okay, on a roll here, the icing on top would be the cape, the icing in the middle a belt, and the pineapples...stick on diamantes? Sparkly hairpins?) 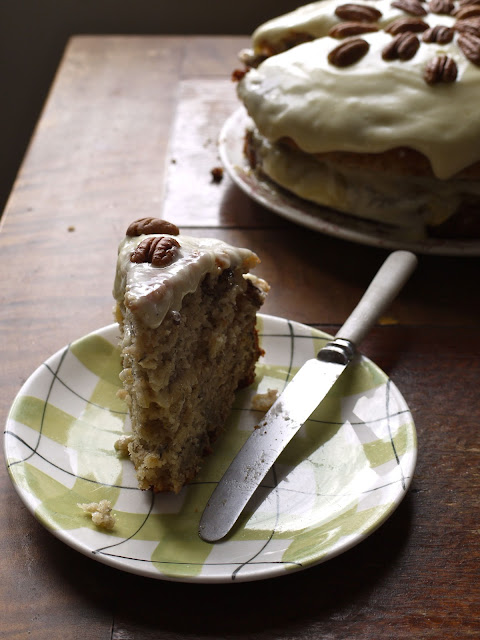 It's the sort of thing I'd be tempted to tinker further with, in the name of improvement - adding coconut, mangoes, rum, grated carrots, white chocolate, maple syrup, that kind of thing. But believe me when I say it's beautiful as is - anything else added would be delicious, but I wanted to try it in its purest form first. That said, I did spread some lemon curd between the layers. So, I guess I didn't quite listen to own lofty advice. That alone was the extent of my tinkering, I swear.

While it might look terrifyingly well-stacked, for one thing there were some recipes calling for triple layers, and for another thing, as with many recipes that I present here, there are options. As this makes two hefty cakes which you then sit on top of each other, you could always just halve the mixture and still be having a good time. The cream cheese icing is a little non-negotiable, but leave it off and the recipe's suddenly dairy-free. Pecans, again, give it that proper southern vibe, but they are expensive - I believe their cheaper friend, the walnut, would be a more than delicious substitute. 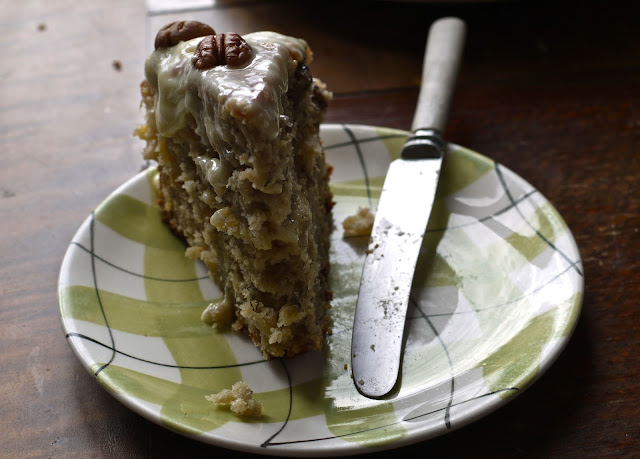 Recipe via this one I found at The Enquirer - thanks, Enquirer!

Set your oven to 180 C/350 F and take two 22cm caketins and line them with baking paper. If you're halving this, the three eggs are going to be an issue...My guess would be to use two eggs.

Whisk together the eggs, oil and sugar till frothy, then mix in the fruits and the cinnamon. Sift in the dry ingredients, fold together, then divide evenly between the two tins. Smooth out the surface with a spoon. Bake for about an hour until done - two cakes in the oven dilutes the heat a bit, I had to bake one of the layers for at least another half hour.

This is going to make WAY more than you need, but I suspect that just one container of cream cheese wouldn't be quite enough. I'm happy to be proven wrong though. Make sure your cream cheese is at room temperature - that's important, it's like trying to stir a brick otherwise - and whisk it up till smooth. Stir it icing sugar, probably around 250g but just keep going till it's very thick and doesn't look like it's going to slide off the cake at the first chance.

Sit one of the cakes on a plate, and spread it thickly with cream cheese icing, leaving about an inch border free to allow for spreading. Sit the second cake on top, and thickly spread this with the icing too. Most cakes you see online have the sides iced too, but I suspected, probably correctly, that my icing would just fall off. You could always follow the recipe I linked through to, which uses butter in the icing and is therefore more likely to be secure. 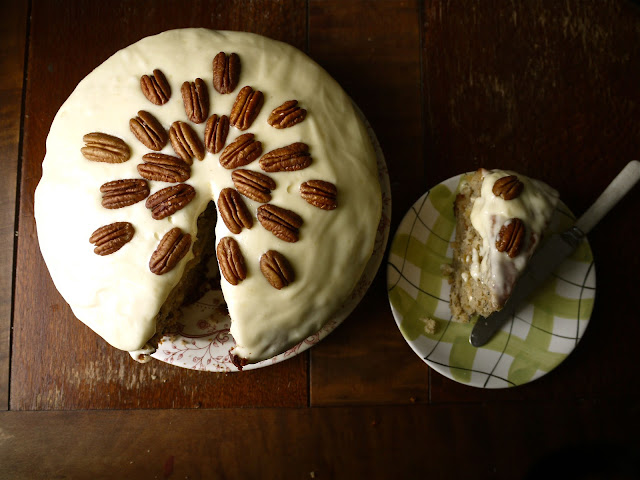 The swiftest of glances at the ingredients list will mean it's no surprise how luscious and gorgeous this cake is, but let me tell you anyway. Rich-textured with all that banana, gratifyingly enormous, with the summery, juicy flavour of pineapple, the smoky, soft crunch of the pecans, and the sticky, sharp cream cheese icing glueing it all together. It's gloriously un-sensible and yet it's not too much more effort than a regular banana cake, and what little effort you do have to put in is rewarded with some outrageous amounts of deliciousness.

Speaking of un-sensible, I made a new tutorial video!


This one's all about making bread, so if this intrigues you in the very slightest and you've got a spare ten minutes, kindly hit that play button.

Hard to believe it's already mid-October. It's also hard to believe the horrible, terrible situation in Tauranga with the Rena oil spill - I'm not going to say anything about it in case I say too much, but it makes me feel sick, sad and angry.

So what next? I love this blog and I'm in no way ready to retire and receive my cut-glass bowl or gold watch. I guess I'll keep working on my list, keep trying to discover recipes, keep writing and climbing that mountain (totally metaphorical, I'd never climb an actual mountain...never again) and just generally do things that involve the word "keep". Thanks so much, from the bottom of my butter-clogged heart, to everyone who was there from the start (that's you, Mum and Nanna) to everyone who's stuck around, and basically to everyone who's ever given me their time. Because, while the love of food and writing about it is strong, the knowledge that there are people out there reading this every time something new crops up is what really keeps me coming back here.

Next time: Not nearly as much emotion, for one thing. I've got ideas, but I don't have anything actual, so we will see.


Also: editing this to submit it to Sweet New Zealand - monthly blogging event created by Alessandra Zecchini, and this month hosted by lovely Sue of Couscous and Consciousness. Late, but not so late...that it's too late. 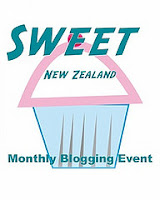