Email ThisBlogThis!Share to TwitterShare to FacebookShare to Pinterest
For the first time in a long time on this blog, I found myself writing paragraphs and deleting them, venturing forward with sentences and then frustratedly reeling them back in with the backspace button. I'm not sure what's more annoying - this whole process, or the fact that what I'm trying to write isn't even a revelatory thing or big news, it's just trying to knead it into the right shape that's annoying me. But because I don't have time, I'll just try, and hopefully people pick up on what I'm putting down. I'm pretty sure some version of this question was voiced in an Anastasia Krupnik book, but is there a point in your adult life where you suddenly become a proper grown up? Where things fall into place?

I'm not claiming I'm the only person in the world to be constantly forgetful, concerningly clumsy, bafflingly untidy, bad with important papers/remembering dates/doing tasks by a certain date, constantly turning up to appointments at least a week early and heart-thumpingly anxious (Not to undersell myself, book-deal people. You're different. I can deliver you a sparkling diamond of a manuscript by like, six weeks ago.) I also am not seeking perfection or anything, I suspect the answer to all of this is "you learn from your mistakes and you make lists and just be tidy already", and the fact that it doesn't seem fair that some people are just more developed and self-assured in these areas naturally confirms in my head that I'm just not grown-up yet. It doesn't help that people always think I look years younger than I am - I'm not quiiiite old enough for it to be a compliment - am I ever going to get it right? 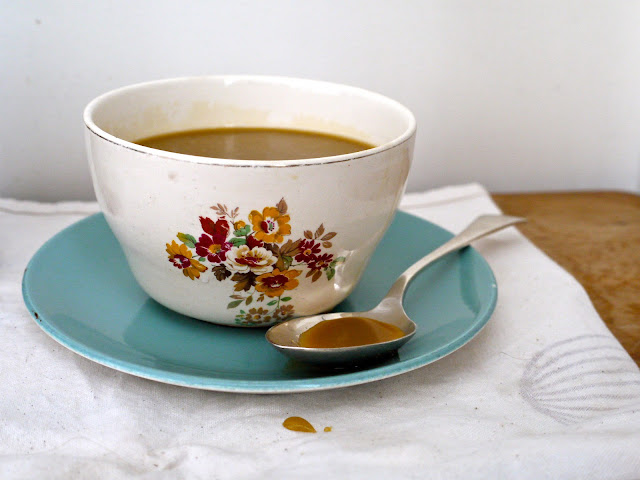 If I'm not personally up for it - and my three-ish hours of sleep on Saturday night (admittedly, I was going to have a pretty late night anyway but then I got woken up by a whole lot of noise out of my control at 4pm, so it wasn't all self-inflicted) at least this duplex of salted caramel sauces can deliver you some sweetness and light. And isn't angsty person + caramel sauce > annoyingly happy person + no caramel sauce? (Mathematics, finally relevant to me!)

Yes, duplex. One recipe for plain Salted Caramel Sauce and one recipe for Vegan Salted Caramel Sauce. The former is about as perfect as it can get, the latter was an experiment I'm not sure I've properly perfected, but it's still great enough that I'll share it with you confidently. Salted caramel seems to be quite the bandwagon these days but it's so uncomplicatedly delicious that I don't even care. Will it become the pesto of the 2010s? I hope so, because that means it'll be on everything, everywhere. 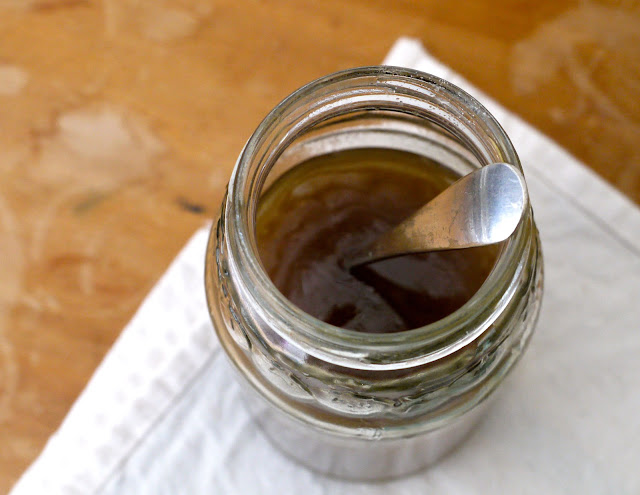 Above, vegan, below, not-vegan. Why both? Because I think the trinity of butter, brown sugar, and cream is easily the most unsurpassed in history, a salute to simplicity and the joyfulness of each ingredient. But if you don't eat dairy products then it's really not going to be as fun for you. And I want to spread the joy of caramel sauce, not hold it back. (Literally. Look at that sauce dripped on the teatowel. So symbolic.) 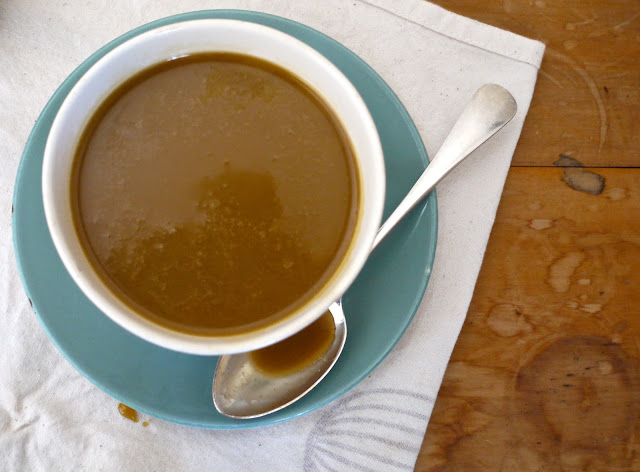 Caffeine shakes from downing great quantities of icy fretta coffee at Customs Brew Bar threatened to ruin all these photos but luckily I managed to salvage some non-blurry ones. If you look carefully in the caramel sauce above you can see my reflection looming! Self Portrait As Salted Caramel Sauce... 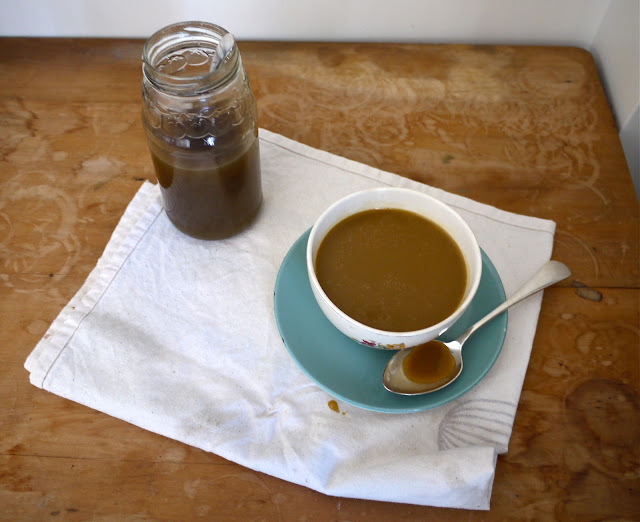 120g butter
120g brown sugar
500mls cream
Salt - the nice flaky sea salt is good here, but use what you have

Gently melt the butter and sugar together till it forms a cohesive and alluring paste. Raise the heat a little and allow it to bubble up and boil. Remove from the heat and stir in 1/2 the cream (1 cup). It will likely bubble enthusiastically at this point. Stir till smooth, then stir in the second 1/2 of the cream. Once it's cool enough to taste, try adding 1/2 a teaspoon of salt and then move up from there. It will thicken as it cools.

This uses the magical properties of cornflour to give smooth texture to the sauce, and a little coconut oil for body. You could use custard powder, but the fake vanilla flavour's a little intense. Coconut oil can be a bit expensive, but I figure if you're not buying butter or milk...

In a large pan, whisk together the sugar and cornflour so that any large lumps in the cornflour are dispersed. Then whisk in the coconut oil - just to mix it in roughly, be aware this is going to look a bit weird for a while. Set the pan over a low heat so that the sugar starts to soften and caramelise a little and the coconut oil melts into everything. It doesn't need to be anywhere near liquid, just good and hot, when you add the first 250ml (1 cup) of water and the golden syrup. It will hiss and bubble, so stir it well till it's smooth. Don't worry about any cornflour lumps, they should disperse eventually. Add the second 250mls water, bring it to the boil, and then let it bubble away until syrupy and somewhat reduced in volume. Remove from heat, and once it's cool enough to taste, add salt till you're happy. 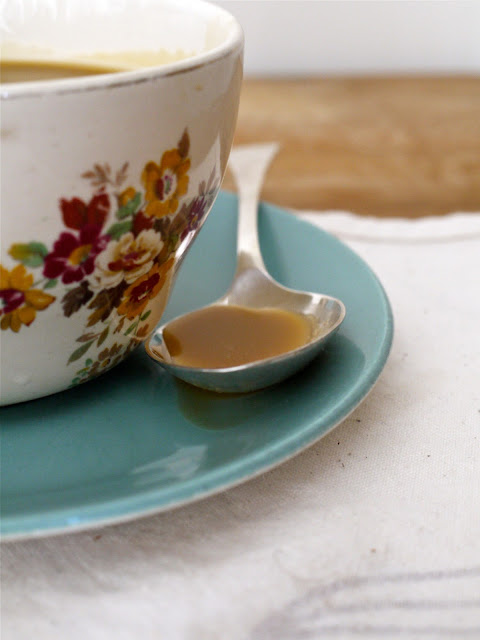 Sauce one: Look, butter is just the best thing in the world, okay? It's not a competition between the two, but while I'd happily pour the vegan one on my ice cream or other suitable catching nets, I could even more happily drink a pint of the other one. From a pint glass. Every day for a year. For all its simplicity, this sauce bears a deep, aggressive caramel flavour and luscious thickness, with hints of butter's nuttiness and the brown sugar's fudginess roughing up the cream's own clean richness. I didn't hold back on the salt - any more and it might be a little bit too soy-sauce marinade - but it's perfect, a slight shock to the tastebuds, stopping it from being too straight-up sweet but delivering the dizzying flavours to you even faster. 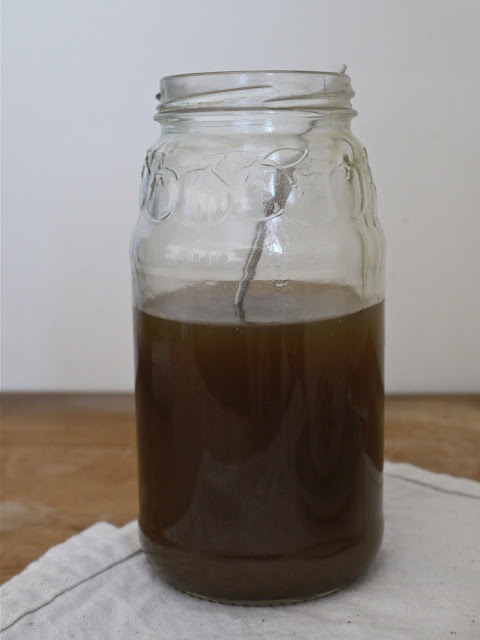 Sauce Two: Oh no, I've used up all my adjectives for the word caramel describing the last one! This clever sauce has a double life - if you use it hot, straight from the pan, it's a rich clear syrupy sauce, the kind that soaks well into spongy puddings. Once cooled it's opaque with more body and a slow-moving texture thanks to the custard-thickening effect of the cornflour. Without the dairy to dilute and enrich it, the sweetness is a little more upfront - but when you've got the sticky toffee flavours of brown sugar and golden syrup providing the sweetness, this is no bad thing. 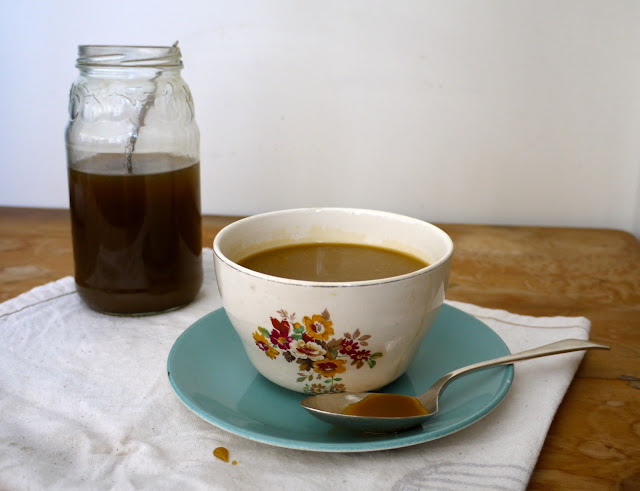 Despite the random acts of uselessness, my weekend was fantastic, and a bit of a reunion with everyone we went on holiday with over summer. The high point was Saturday night, which saw a group of us going to see Beirut, a band that sounds like a place, at the Opera House. They were just wonderful. The show was made even better by having said friends at our house both before and after for snacks and drinks. I had planned on feeding them all this caramel sauce but the chocolate sorbet I made for it to be poured over didn't turn out as planned...but it's a decent excuse to orchestrate other fun times. Or to drink the sauce by the pint!

Laurie Beechman. She died in 1998 so there'll never be anything new from her, but luckily her incredibly powerful voice was commited to some albums and cast recordings. There's precious little of her work on youtube but watch her sing On A Clear Day - I cried. If you don't think you can sit through a Streisand cover, try Seth Rudetsky's loving deconstruction of why her voice is amazing.