i got a new rose, i got her good

Email ThisBlogThis!Share to TwitterShare to FacebookShare to Pinterest
Me: I'll lock you in the Fever Hospital and run away.
Tim: I'll befriend the ghosts and they'll let me out and lock you in. And then be angry at you for locking me in. Ghost gang!
Me: I'll turn the ghosts against you. You will not win this ghost war, Tim. Because...I am a ghost.
Tim: I knew that.
Me: Oh. That wasn't the dramatic flourish I thought it would be.

(We were discussing potential photography for our far-off wedding, and how it would be cool to find a spooky old house in Wellington to get shots taken in, and then it escalated. Actually in fairness this wasn't an escalation, what you see here was more or less the whole conversation.) 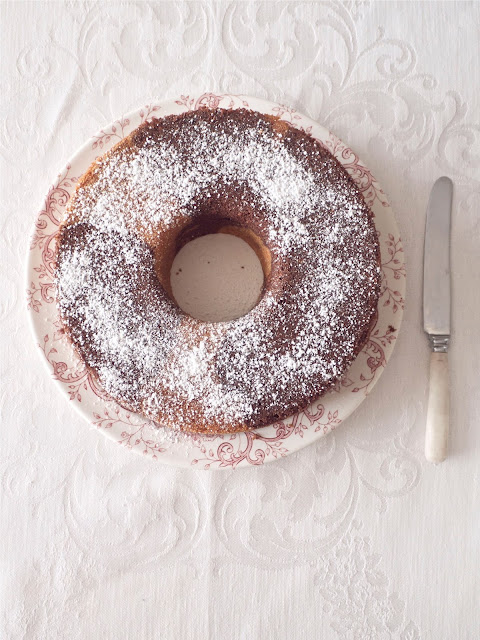 Speaking of photos. Oh yeah. Guess who cooked something in the middle of the day and took advantage of the natural light to photograph it in. 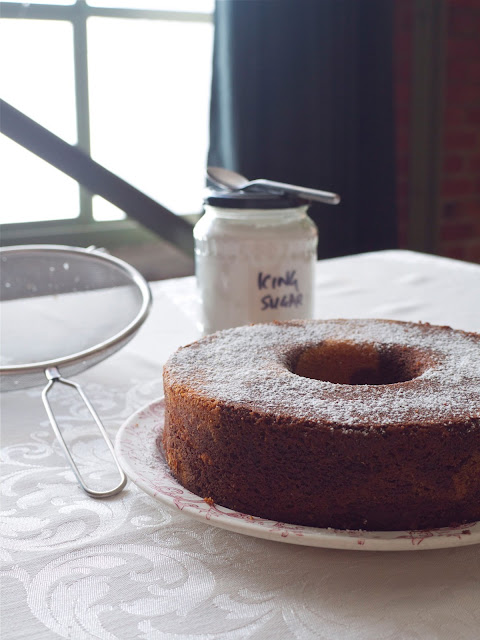 You'd think I'd never seen natural light before. Could not stop photographing this cake. I really could take or leave sunshine most of the time anyway (which is lucky, since I live in Wellington) but it does help a cake look swell. 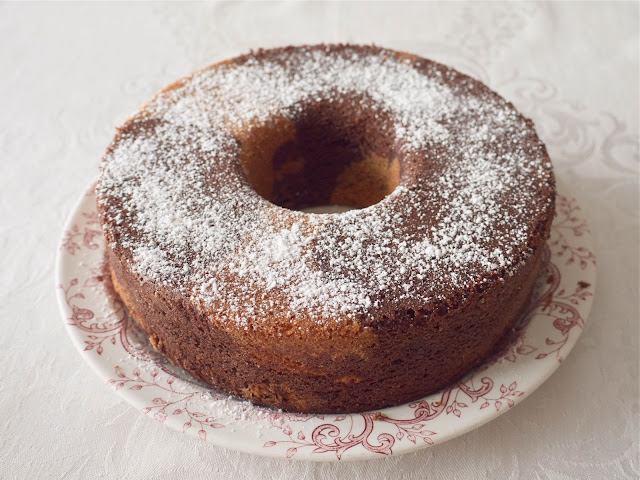 I am enamoured. I took so many photos that I could write this entire blog post in these stilted, sassy little sentences with images interspersed rather than my usual three-abreast enormous paragraphs. (I don't know, I notice these things.) But will I? Ha! Folly!

Am currently riding the wobbly bicycle of two consecutive nights of appalling sleep. I had to stop - I counted - twelve times while typing the small paragraph directly above to yawn. For a while there it felt like I was back on the sleep wagon, but for the last month or so I've been reliably having horrifying visions just as I shut my eyes. I won't even go into them here because I don't want to freak you out too much (although, hmmm, a tamer one was a skull with two flailing arms reaching through the eye sockets) but there's nothing like a chilling vision to make you suddenly very awake. I've also been waking up very early on weekends. Sigh. I'd happily be nocturnal if I didn't have to also be administratively functional in an office during the day. But here I am. On a less alarming note...or is it...when I have managed to sleep, I have been having so many dreams about instagramming things. A majestic whale, swimming near the crystalline shore; a dazzlingly pink cherry tree in full bloom; a sunset as richly orange as a roasted apricot. What an age we live in! What an age I live in, in my head! 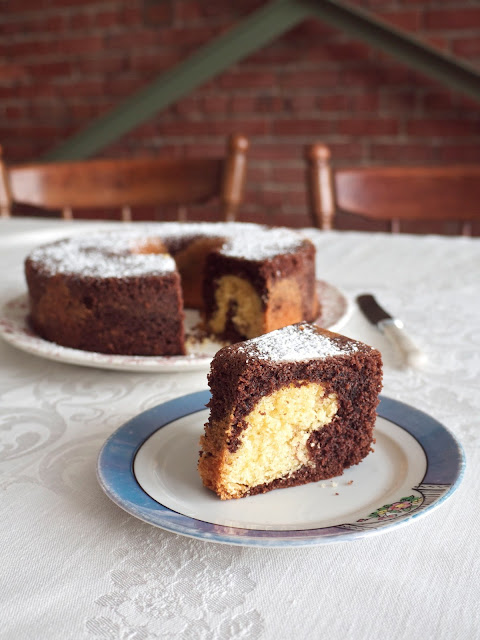 Back to the cake. On Sunday I wanted to bake something to be able to take along with me to augment my appalling work lunches (that's a whole other story, but the condensed version is: for someone who likes food I'm not very good at feeding myself sometimes!) and I had a feeling we'd be seeing some friends later on in the day. "I'm going to make a goddamn marble cake" I announced with steely purposefulness, like some hardened cop in a buddy-movie having a moment of clarity. About deciding to make a marble cake. It was reading through old cookbook that I found in a bookfair once that reminded me of this confection: basic buttery sponge cake, divided into as many bowls as you like, each flavoured with a different tincture of some kind, and then dolloped back together to make a thrillingly dappled baked good. Back in my day, before I'd ever heard of the word "ombre" (and for shame, I read the dictionary for fun as a kid) marble cake was pretty high impact. 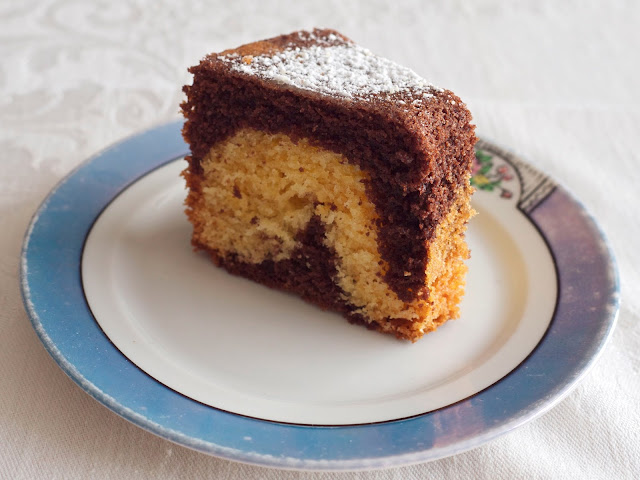 This one appealed to me particularly with its swirling of rosewater and dark chocolate-tinted cakes. Being fairly susceptible to romantic notions, eating something scented with roses feels gratifyingly sybaritic. Of course, rose isn't for everyone - it's a very particular flavour, delicate and sweet, but pour in too much and your cake will taste like shower gel. Here it subtly perfumes its half of the batter, contrasting the darker, plainer chocolate with a slightly floral, almost lemony burst of flavour. For a while I was a little sad I didn't have any red food colouring to make the rose half of the batter pink, but decided it could be representing white roses. I also expressed some disappointment at no longer having that bunch of dead roses from while ago, which could've been in a vase in the background behind my rose cake. But then Tim said "mmm, synergy" and I didn't feel so bad. In case you don't work at an office of some kind, sometimes particular words or phrases get ruined through their overuse in work-related documents and communications. Don't even get me started on "deliverables". No wait - that word ruins itself. Enough of that ugliness though: this cake is very easy to make, it tastes like a dream, and looks pretty jazzy, especially if you do the old dusting-of-icing-sugar trick. If you're really not sold on the concept of eating a cake that tastes like flowers, or indeed, if you just don't have access to rosewater right now - I'd use a generous splash of vanilla instead, or anything you want, really. Peppermint extract could be fun, or you could make one half chocolate and one half orange.

Adapted from The Chocolate Lovers Cookbook, one of a million bearing that title, but this one was published in 1985 and is by someone called Audrey Ellis. Thanks, Audrey! Ring tins are a little nervewracking because you can't really line them with baking paper, but this cake slid out easily. Also: what they lack in that department, they make up for in being stupidly easy to cut nice even slices out of. I don't know why, and I'm not sure I even care. It just happens.

1 tablespoon cocoa
2 tablespoons boiling water (this is a ridiculous quantity to boil, make yourself a cup of tea while you're at it.)
250g soft butter
1 cup sugar
4 eggs
250g flour
4 teaspoons baking powder (sounds like a lot, yes? But go with it.)
1 tablespoon rosewater or 2 teaspoons rose flavoured essence

Set your oven to 180 C/350 F. Grease a ring caketin with butter, then shake a little flour round in it, getting rid of any excess by tapping at the base over the sink. In a small bowl, mix together the cocoa and boiling water (this helps intensify the cocoa flavour). Beat the butter and sugar together till light and fluffy, then beat in the eggs, followed by the flour and baking powder.

Spoon roughly half the batter into another bowl. Into one bowl, mix the cocoa-water mix, and into the other bowl, the rosewater. Thoroughly mix each, then drop alternating spoonfuls around inside the ring tin, I mean, it's not going to be perfectly checkerboard-like by any means, this is just a guide. As you can see, I just went for...whatever. Quickly swirl a knife once around the ring through the cake batter-  you don't want to overswirl, or you'll lose the pattern as they merge together while baking - and smooth out the top a little with the back of a spoon. Bake for about 45 minutes, or until springy on top. Leave in the tin for five minutes, then carefully turn out onto a plate. Dust with icing sugar. 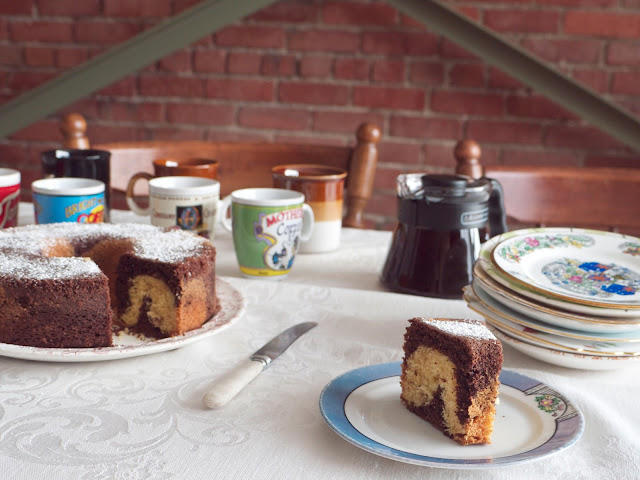 Friends did indeed come round for coffee that afternoon. In a bid to prove I hadn't just put the tablecloth out to make my photos look good on my blog, I left it there all day - in fact, it's still there now, but I think the reasoning has progressed from justification to laziness. It was an excellent afternoon: we listened to records, made idle plans, caught up on happenings, ate a lot of cake. Idyllic stuff. Just the kind of thing I want to be doing with my Sunday.

Speaking of idyllic: I'm going to learn to knit! Snuglife! I can't wait. That is, if I can bear to bust into this oddly adorable, leporine ball of yarn. Yeah, I really need a pet. Maybe I could knit myself one. Maybe I could knit myself a life and then dream about instagramming it. That's if I ever fall asleep again! This is far too bleak a note to be ending this post on, let's look at cake again. 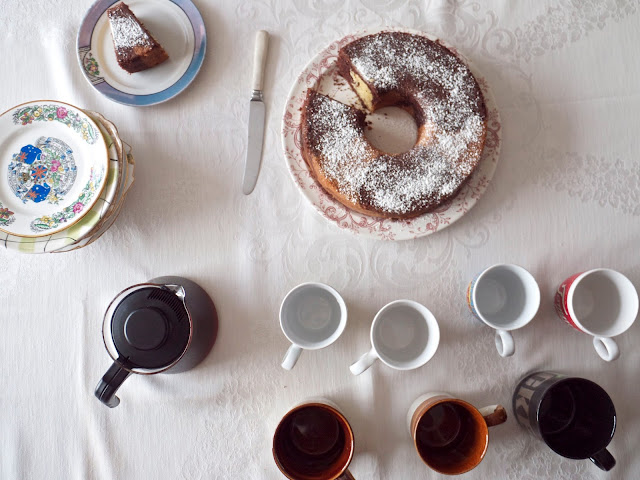 Phew. Going to try to knit a beret-ish hat, in case you're wondering. Winter still hasn't quite started officially yet - that's the first of June - but it's certainly cold enough to try and make my life as plushly cosy as possible. In hindsight, knitting myself a life and then dreaming about it does have a rakishly Michel Gondry air to it, so who knows? Maybe everything's working out the way it's supposed to.