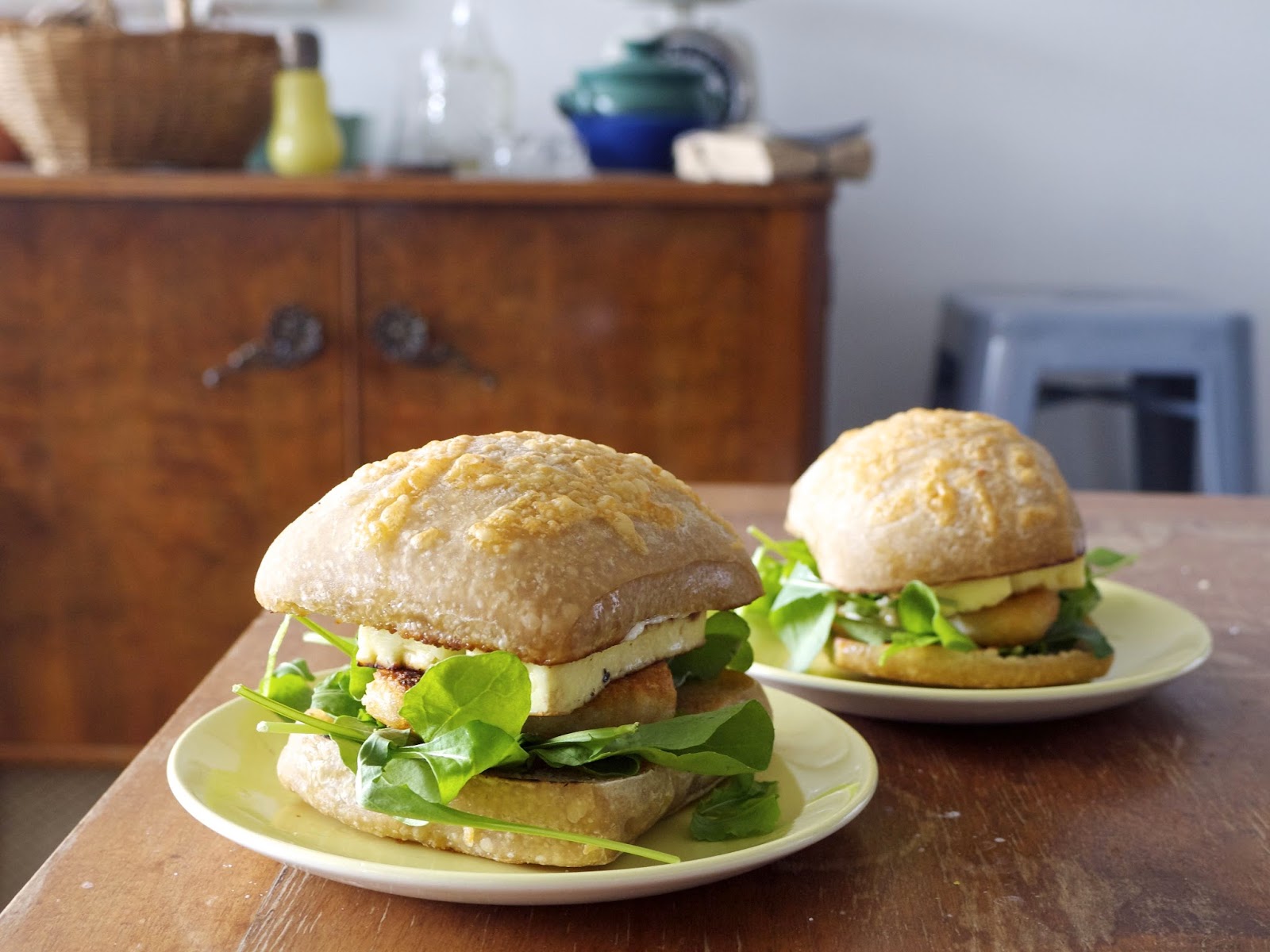 Halloumi and hashbrown burgers. Pictured: one serving. At best. Maybe more like quarter of a serving. Okay, this fed two of us, but now that I've said it I would probably eat four of them to stubbornly prove a point. A delicious point.

Post-confessional blog post confession: While I am glad I was open about being dropped by my publishers and having my cookbook slowly fade towards being out of print, I'm not necessarily doing any better now that this blog post has rolled around. But that's understandable, right? You can have all the facts and logic and numbers and tough love (ugh, tough love, give me indulgence any day!) and still just stare blankly at them and feel downtrodden and sullen nonetheless. I mean this applies to anything. Relationships, jobs, talents, plans...pants... 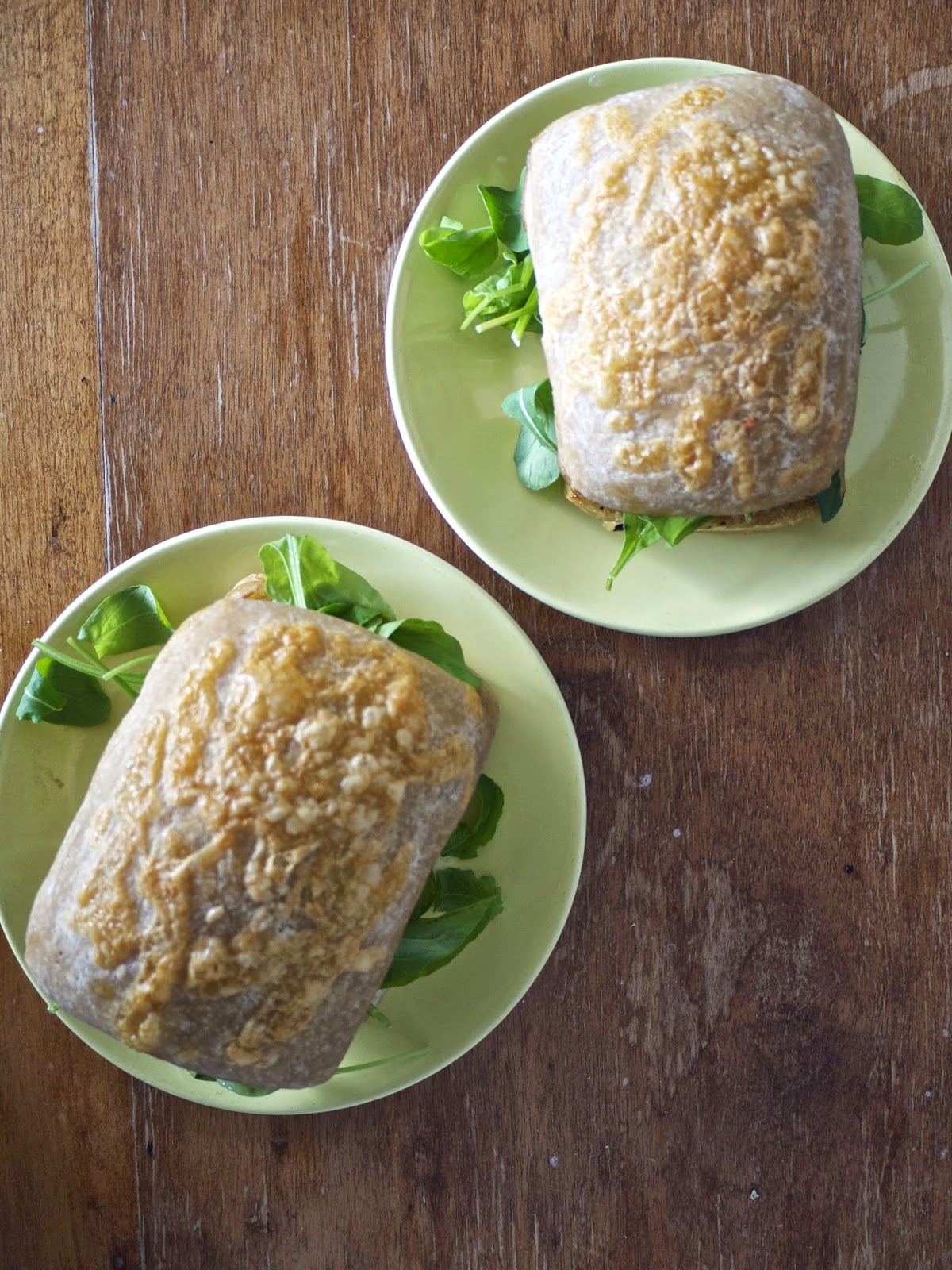 But, I made halloumi and hash brown burgers, and for that simple, selfless act I think I deserve an internationally recognised award for Persistent Services To Deliciousness, or another book deal, or something. (That's right: I can be aggressively hard on myself and aggressively self-believing at the same time. It's...charming.) On the other hand, I hardly needed to write a blog post about these - it's mostly just assembly, if I say the words "halloumi and hash brown burgers" that is kind of the whole recipe and information that you need right there. But while this may be simple, it's still something you might not have thought of making before, and those are my favourite kind of recipes - the sort that make you say "oh damn!" in a low, appreciative voice, and make you watch the clock till you can next rush into the kitchen to lovingly cook for yourself.

Halloumi is essentially the flavour of butter suspended in the form of a captivating cheese that you can fry goldenly without melting entirely. Hash browns combine soft potato insides with magically crunchy exteriors. These two things just make sense together. The bulging cheese with the crisp hash brown, the salty, oily bliss of it all against the peppery rocket leaves and soft, chewy ciabatta - it's burger brilliance, and it can be yours within minutes.

a recipe by myself, although inspired by meeting someone who works at a cafe describing what they like to make themselves on their breaks.

two ciabatta buns
one 200g or so block of halloumi
four triangular frozen hash browns or two rectangular ones
a handful of rocket leaves
mayonnaise, lots of mayonnaise (or aioli if you like)

Heat up a large frying pan. Cut four thick slices from the block of halloumi, and split the ciabatta buns in half. Fry the hash browns for about five minutes on each side, till golden and crisp and y'know, blatantly not frozen. Set them aside on a plate and fry the halloumi slices. If you have space in the pan, add the ciabatta bun slices cut side down to warm/toast them slightly, but it's not essential. Once the halloumi slices are deep golden on both sides, turn the heat off and, if you like, return the hash browns to the pan to let them stay warm in the residual heat.

Meanwhile, spoon mayonnaise generously onto both the top and bottom halves of the bun, then layer up your burger like so - bottom half bun, handful of rocket leaves, hash browns, two halloumi slices, top half bun. Eat immediately, pausing only to take instagrams because you suspect people will lose it over the sight of these on their dashboard. 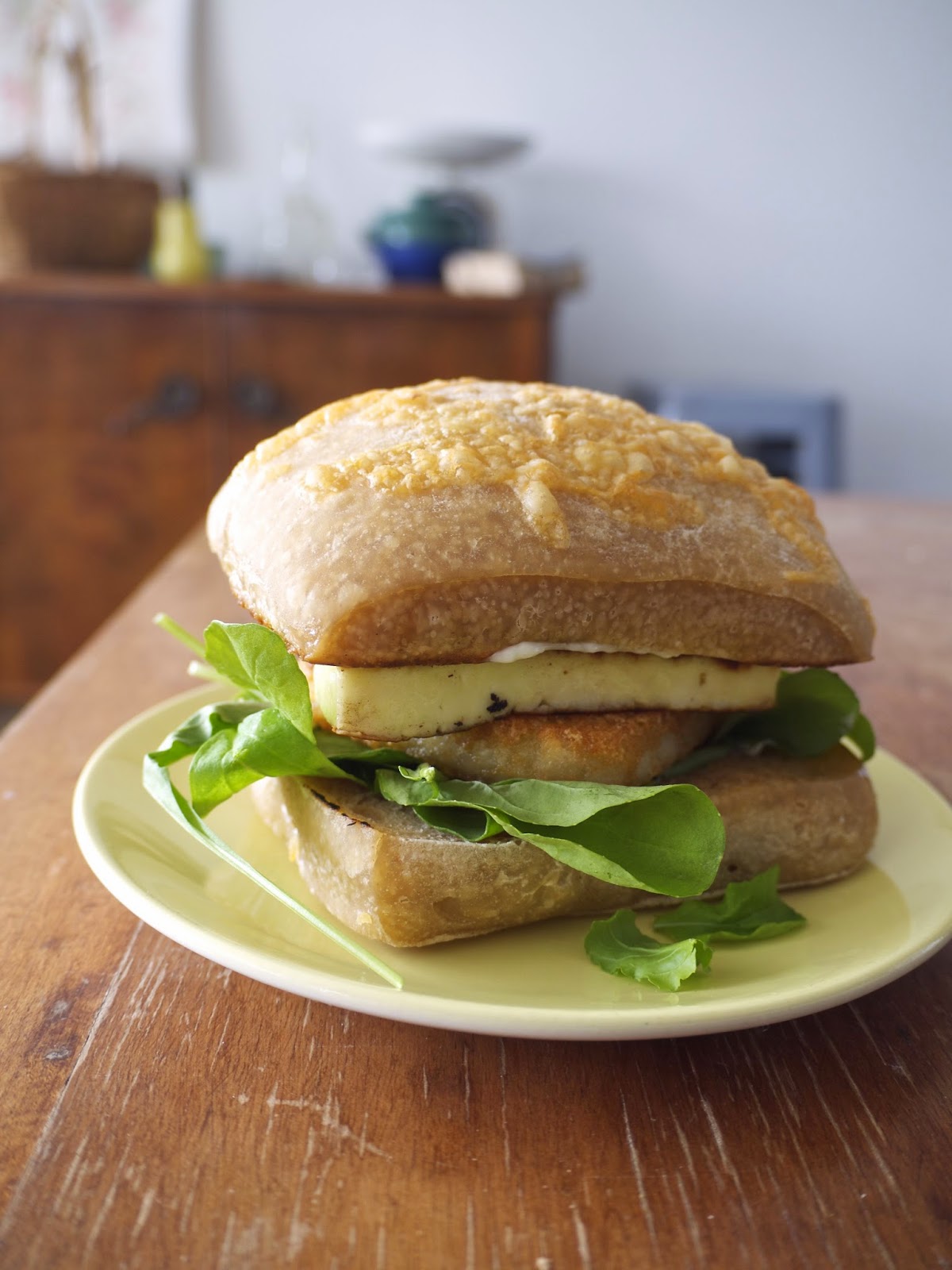 The cheese and potato together are almost...meaty? Cheeseburger-esque? I can't quite pinpoint it but the whole thing is breathtakingly good and you should make this for yourself and anyone else you care for. I guarantee it will make you unbelievably happy.

As I said at the start, I am not feeling terribly outstanding in the field of excellence lately - still deeply unemployed, although I have been applying for lots of things and pitching my writing to lots of great places and have had some flickers of interest, so there's that. I've come to realise that I am not necessarily looking for a steady office job. I'm a people person when I'm not being sullen and a night owl and am hoping to find something that uses that side of me. And as I said in my last blog post, I refuse to let it occur to me that I might not achieve massive success and fame from my writing and cooking. It's not so much that failure is not an option, it's more that triumph is the only option. Failure, well, it only gets you closer to winning, right? (And other things we tell ourselves.)

(Olive, where the brioche is caramelly and buttery and the coffee is excellent and swift and the wifi is in existence and exists)

Right Beside You by Sophie B Hawkins. Just because this song is from 1994 I don't know why it isn't constantly top of the charts, it's so, so good.

next time: raw chia seed berry jam. I think I like it better than usual jam?
Posted by hungryandfrozen