pile on many more layers, and i'll be joining you there 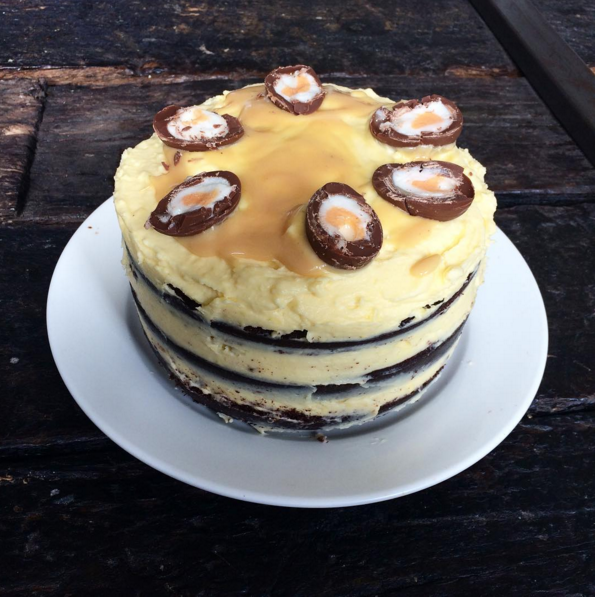 Well, Mars may be in retrograde and my April tarot card may be the tarot card equivalent of a heavy resigned sigh, but: ya girl is out here being thirty finally. (She says, quite thirty-ish-ly.) It seems only right that the first blog post I do after my birthday is for a birthday cake, yeah? Not my own, but instead one I made for my pal-and-colleague's girlfriend's 21st, because that's a thing I do sometimes. Such a momentous occasion and an honour of a task calls for something a little no-holds-barred, and with the simple brief of "Cadbury Creme Egg" I set to work on what turned out to be this three layer masterpiece. Being the dingus I am, I stupidly only took a few cursory snaps of it on my phone rather than sitting it down and lovingly photographing it with my proper camera, but I was so pleased with the results - like, look at that thing! It's beautiful! - that I decided to blog about it anyway, hasty photos and all. Who knows when you, yourself, might need to make a three layer creme egg cake! 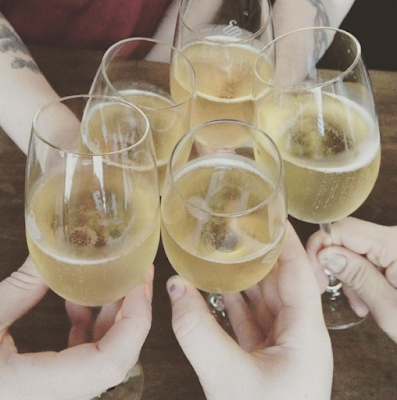 champagne for my real friends

As for my birthday, I won't sugar-coat it for you: it was wonderful! It started when the clock ticked over to midnight the night before because I was still working; however all the hugs and frolics made it fun and I liked that I got to catch my birthday in the act, right as it started, without wasting a drop of it. As someone who wastes a lot of time fretting about wasting time, that was nice. The day proper had a professional hair wash and straighten like I am a fancy rich woman who just does that, real champagne, delicious brunch, the receiving of exciting gifts like tequila and a gilded bowl and Lana del Rey vinyl and a rather gobsmackingly beautiful record player; rewatching Once More With Feeling; a phone call home where tales of my birth and incredulity at the passage of time since then were recounted, and then lashings of wine and platters and selfies with beauties at the place where everybody knows your name (yeah, that's right, I went back to work to hang out on my birthday, that's how much I like the place.) 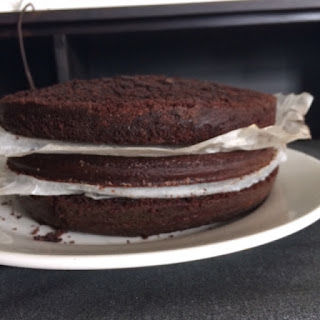 So, the cake! Oddly enough it was incredibly un-stressful to make - I made it in my mornings between doing wall-to-wall shifts at work and was still generally very serene the entire time. The mixture generously makes three moist, rich cakes with near-perfect tops for stacking and icing (I sliced a bit off one to make it super evenly flat, and this is how I know it tastes extremely good.) The icing of it is also very straightforward, and in fact the hardest thing about it is getting your hands on some creme eggs. I was going to ice the whole lot like a more traditional cake but decided to leave the sides nakedly exposed with the icing tightly spread into every gap a la momofuku - it's actually much easier, and that way you can see the cakes themselves in a "you're damn right this cake is three layers tall" kind of way and it's all rakishly messy yet neat at the same time. 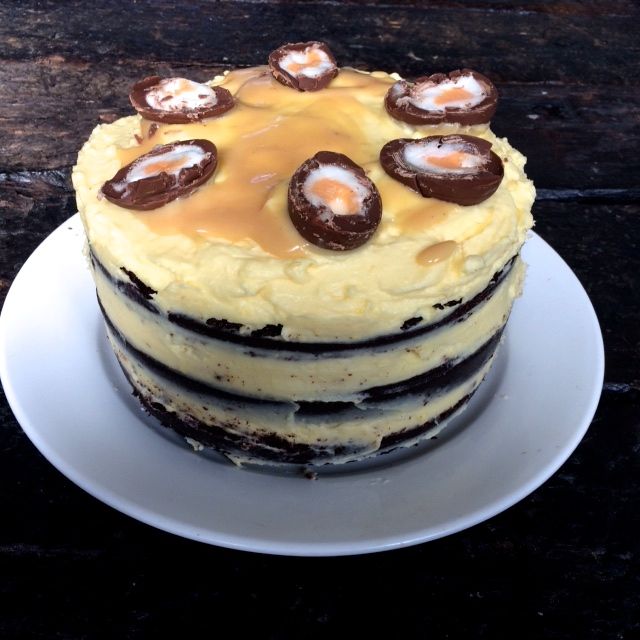 I could've gone for a more hardcore filling but decided that the tang of the cream cheese would gently counteract the bone-dissolving sweetness of the fondant inside the eggs while still showcasing them. Honestly, the more novelty involved the more serious and thoughtful you have to be. This cake is so majestic and tall and the creme eggs look so cute all halved and nestled in together that you really don't have to worry about any further decoration but there's also nothing stopping you - my one concession was to quickly melt a caramac bar and pour it onto the top layer to echo the look of the eggs' filling, but it's not that necessary.

These recipe instructions are long as hell, I grant you, but it's honestly more or less chill. I just like to reeeeally explain stuff. As I point out in the recipe, I only had two caketins so baked two layers at once followed by a third, and it all worked out. Also, this would be easier with a cake mixer probably but I used a mere wooden spoon and honestly didn't even do that great a job of creaming the butter and sugar and it STILL worked out fine so - let's all just breathe.

I made the actual cake itself by following the recipe from this site pretty well to the letter; all the random measurements are a bit of a faff but the cake same out perfect so I'm happily and trustingly passing it on to you. I deviated and made my own icing, if you wanted to take this cake in a whole other direction you could use whatever filling and icing you like. It's a very good starting point.

Take three 20cm springform caketins and line the bases with baking paper. Grease the sides with butter and sprinkle a little cocoa over them, shaking the tins about till they're fairly evenly covered with a cocoa dusting. Set your oven to 180 C/350 F.

In a medium-sized bowl, mix together the cocoa, coffee powder, water, and sour cream till smooth. In a large bowl, beat the butter and sugar together till creamy. Beat in the eggs one at a time till thoroughly incorporated, then add about a third of the flour and baking soda (you're gonna want to sift them if you're going to all this trouble, the last thing you need is baking soda lumps) along with the cocoa mixture in alternating quantities, mixing till it's a suddenly-enormous dark, smooth chocolatey batter.

Divide the batter evenly between the three cake tins, smoothing down the tops. Place them all in the oven and bake for thirty or so minutes, rotating their positions on the oven shelves halfway through to ensure even baking. If you only have two pans, then just bake two cakes using 2/3 of the cake mixture, then while they're cooling, put the remaining third of the batter in one of the used cake tins and bake that after. This is what I did and it was totally fine.

Allow the cakes to cool completely.

100g soft butter
500g cream cheese (this sounds like a lot but it's just two of those Philadelphia packets) at room temperature
two cups icing sugar, but have more just in case
five or so creme eggs (perhaps grab a few extra in case anything goes wrong.)

Make sure both the butter and the cream cheese are soft, and your icing sugar isn't lumpy, and then just mix the hell out of all three ingredients till you have a ton of icing.

Slice the peaked tops off any of the cakes if they've risen too much, so that they're all more or less flat. Place one cake on your chosen serving plate, and place a good dollop of icing in the centre. Spread it out fairly evenly using the side of a knife. Unwrap one creme egg, roughly chop it, and sprinkle/drop the whole lot evenly on top of the icing. Then place another cake layer carefully on top.

Don't worry if there are massive gaps between the layers, we'll take care of that later. Repeat this process with the next layer of cake and another egg.

Finally, put the top layer of cake on and spoon most of the remaining icing on top. You want a decently thick, even layer on here. Now, using the side of the knife, smear remaining icing into any gaps along the sides, running the knife's side around the sides of the cake to press it all in and to create a messy yet smooth look. Does that make sense? You kind of want the cake to look like it has just fallen out of a cylinder. Halve three creme eggs and arrange them, cut side up, on top of the cake. I melted a caramac bar and drizzled it into the centre just to add to the creme egg look, but it's not essential. You now have a damn creme egg cake. 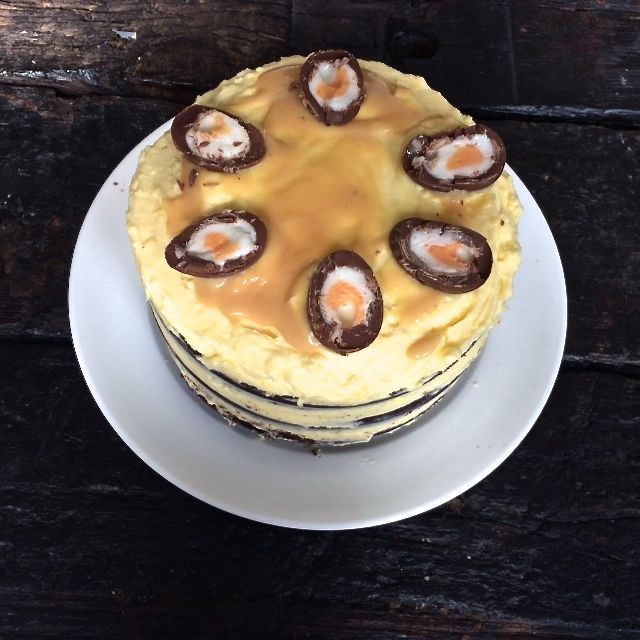 So I ate a bit of cake off-cuttage and a lot of icing and loved it all, but in order to strike real faith in your hearts about this recipe, let me quote the actual recipient of the cake, the birthday lady herself: "Argh it was amazing! With all of the layers and all of the creaminess and chocolate and just the fact that a cream egg could be transformed into a cake. Super awesome and delicious".

I had a lot of fun making this cake and it was such a nice opportunity; and should you ever be called upon to make a fancy big cake I definitely recommend this one. If creme eggs are emphatically not your jam, I think this would be amazing with roughly chopped caramel-filled chocolate covering it with the caramel dripping everywhere; or with smashed up oreos, or with milk chocolate melted and drizzled all over the top, you see what I mean? For an enormous time-consuming cake made to a very specific brief it's really quite versatile. 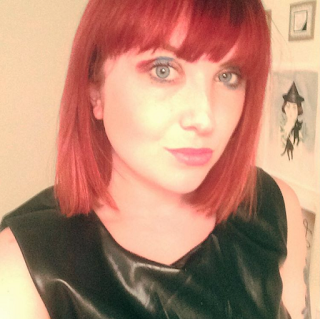 Something To Sing About, from Once More With Feeling. As I said, on my birthday I rewatched this, the musical episode of Buffy The Vampire Slayer. Joss Whedon can be ever so Joss Whedony but I'll never deny the incredible cleverness that went into writing this episode. All the songs are brilliant and Something To Sing About is 100% NOT the best place to start if you don't know the story because of the massive spoilers and lack of context but it's still my favourite and you should watch it anyway. Buffy's eyes! The discordant wobble when she sings "heaven!" Spike's half smile when he sings back at her! The time signature changes! I died.

By My Side, Godspell. I busted out my copy of the original broadway cast recording of the musical Godspell on vinyl and while it hilariously does not hold up, the music is still endearing and By My Side is still one of the most beautiful songs ever written.

Penguins and Polarbears, by Millencollen. Couldn't say why, but I truly adore pop-punk singers when they sound completely congested, which Millencollen delivers upon handsomely. If the lead singer makes you want to swallow an antihistamine for your own safety, then chances are I'm all over it. (There's a point during the Green Day Bullet in a Bible concert performance of Brain Stew where I'm pretty sure lead singer Billie Joe is literally just dribbling incomprehensively and I love it.)
_________________________________________________
next time: I think I mentioned last time that I made homemade matcha mayonaise but I also made this awesome granola stuff. Either way: deliciousness awaits you.
Posted by hungryandfrozen