Do You Hear The People Sing?

I know I've plugged the Otaua video incessantly, in fact you are perhaps thinking "Gee, I know already Laura, you might get a waste oil refinery right by your house, I've watched the video three times, what more do you want from me?!" Firstly, a massive thankyou to those who have watched the video and especially to those who have commented with words of support. The thing is, the Franklin District Council actually...doesn't care. They think that right in the middle of residential Otaua village is a fine home for this oily oil plant. I'm guessing that if it was their home and hometown poised to be ruined forever it would be a wee bit different. Basically, it's not looking terribly positive for us, but the more support we have the more likely it is that the council will wake up to the fact that it can't happen. If nothing else, knowing the eyes of the world are upon them will annoy the council and the WPC Ltd. If you're wondering what else you can do apart from watch the video, well...there's not a lot. But you can visit the brand, spanking new Otaua Village blog, read an article and look at the lyrics to the song on the video. Hopefully there will be more to read soon. I know I keep talking about it but it's all I can offer in the way of help for the cause. Frankly I'm scared about what's going to happen. And angry.


So, Tim bought a barbeque yesterday. A $40 barbeque. It's pretty flimsy, and has all the power of an electric toothbrush, but he and Paul were monumentally excited in a primal, alpha-male kind of way. What is it about barbeques? (Or is that barbequi?) I look at them and think "oooh, griddled eggplant and Japanese marinades and stone-fruit kebabs!" while Tim and Paul de-evolve back to Cro-Magnon Man. 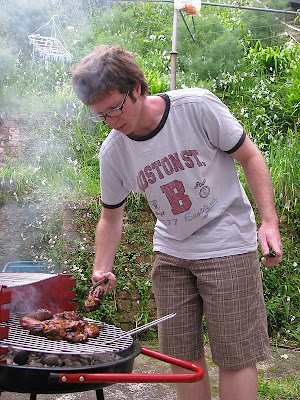 Above: Cro-Magnon Man is, however, modern enough to buy free-range organic chicken nibbles rather than woolly mammoth steaks. 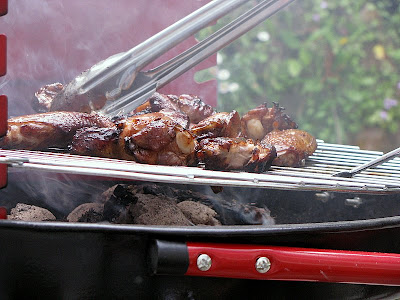 Above: Fell in love with a grill...

The chicken nibbles were pre-marinated (*clutches pearls*) but still delicious, because there's little better than that smoky, outdoorsy, slightly charred taste that comes from barbeque-ing. It wasn't even particularly sunny yesterday (and it's downright icy today) but sitting round "Big Red" as it has been dubbed, with a glass of wine and the smell of protein coagulating over a hot flame, well it felt as though we were in the middle of some endless summer. I can't wait to think of things to cook on it... 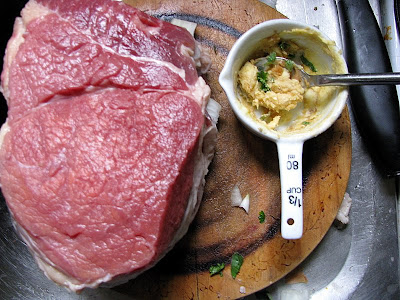 Above: Beef - (a) the meat from an adult bovine (b) inf. gripe, objection, grudge. We got both.

Last time I went up home, Mum bought a healthy slab of corned beef for Tim and I which flew back to Wellington with me (much to the chortles of the guy scanning my backpack at the airport). It was sufficiently chilly over the weekend for me to defrost it and shunning the normal slow-cook way of cooking it, submerged in liquid, I instead adapted a recipe from the Best of Cooking for New Zealanders by Lynn Bedford Hall. I made several incisions in the flesh and pushed in a mixture of butter, white miso paste, garlic and parsely. I know, miso and corned beef, sounds hideously fusion-y, but think of it as a slightly more mysterious version of worcester sauce or marmite. Its mild, complex saltiness makes it good for more than just straightforward soup. The beef was then braised slowly on the stovetop with onions, Stones Green Ginger Wine (also courtesy of Mum), a little stock, some tomato puree, a squeeze of golden syrup and a dried bay leaf. This created a marvelously flavoursome, surprisingly moist corned beef, which we ate with mashed potatoes on day one... 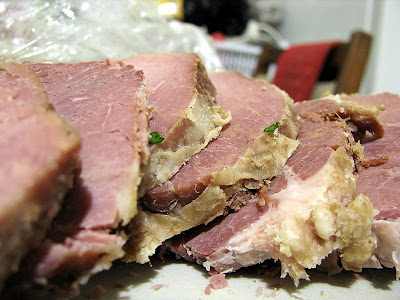 Above: And on day 2, cold and sliced with soup.

I made a version of Nigella's South Beach Black Bean Soup - by that I mean I was too lazy to actually find the book with the recipe in it for fear that I'd be mising half the necessary ingredients and just souped it on the fly. First of all you need to simmer your black beans, I think I did about a cupful but I don't actually remember, I don't think it really matters though. Bring them to the boil in a large pot then turn it down to a simmer for about half an hour or until you can bite into a bean without breaking a tooth. Drain them, and (in the same pot if you like) slowly fry an onion, a diced capsicum, a teaspoon of cumin seeds, a diced, seeded red chilli if desired, and a a teaspoon of ground coriander. Then I added a slosh of dry sherry, the black beans, and plenty of chicken stock, and let it simmer away. It's so simple but also something a little out of the ordinary to add interest to cold leftovers. 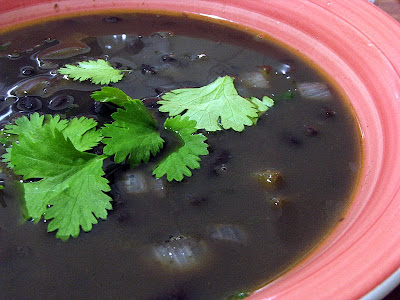 The flavours are perfectly complemented by the earthy-yet-perky taste of coriander. And...the feathery green leaves prevent your soup looking like a bowl of swamp water. I mean, let's not lie here.

A few months ago I installed Google Analytics on my blog, which allows me to find out how people are accessing my blog. For high-powered business websites it's an asset, for the casual blogger it's merely a source of occasional interest. It comes into its own, however, when it lets you see how people have found you through Google. I haven't checked it in a while, and there are some intriguing paths being trekked to my kitchen door.

Firstly, I must be a veritable guru, nay, a shaman of burghal wheat because there is a staggering number of searches for it that resulted in people viewing my blog.

To the people who googled "Otaua WPC" and found my blog, well now you know to visit the Otaua Village site. If it was anyone from the council or indeed, WPC Ltd, I hope you were intimidated by my special brand of intimidation. Many food bloggers across the world now have contempt for your policies! Be uneasy!


To the person who googled "Bit on the side roast pork Allison Gofton Watties", you won't find any of that Food-In-A-Minute, cover-it-all-in-Watties-Sauce-and-potato-pompoms business here. I said good day!


To the person who googled "oat fritters" - oh dear. Even I, patron of the oat, wouldn't go that far.


To the many, many people who googled "the brain, the brain, the centre of the chain" from the Baby Sitters Club movie and ended up here - you are not alone. Re-reading your old BSC books is kitschy nostalgia, not worrying behaviour.


To the person who googled "Idina Menzel" and ended up here, I salute your dedication. Out of curiosity, I went and googled "Idina Menzel" and, thirty pages in, still had no sign of my blog. Clearly, our paths were destined to cross. But to the person who googled "Ina Menzel" and found me - I hope I set you on the right track. It's Idina. And it's not pronounced "eye-dina" because you strike me as the type. Also googled was "how many units of Idina Menzel's 'I Stand' have sold". Because a food blog is the obvious place to find out. But it's a nice thought that such queries would lead a person here.


To those who googled quotes pertaining to Rent, Wicked, Spring Awakening, The White Stripes, Bob Dylan, Pink Floyd, Billy Bragg, Flight of The Conchords, and Neil Young and ended up reading my blog, it proves that quoting pop culture is nothing if not beneficial to your hit count.


And finally, to the person or people (please don't let there be more than one of you) who asked "why can't we eat polar bear liver" and inquired after the "polar bear liver iron count" - what you do in your own time is your business, but don't go dragging me into it. (also - Sarah Palin, is that you?)


To finish on a mildly amusing note, I found this carton of buttermilk in the fridge. I bought it a while ago, but haven't found the right use for it yet. Turns out I can take my sweet little time about deciding what to do with it. 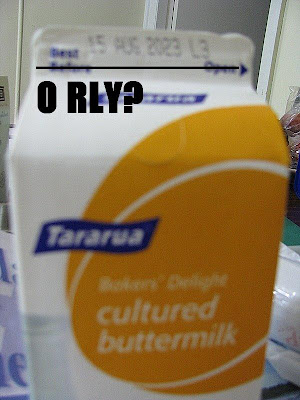 Above: hey, if we can have adorable lolcats, why not lolkitchns also? According to this audacious little carton of buttermilk, I have till the year 2023 to use it. Now, I'm no dairy maven, but that strikes me as a little...optimistic. You better believe though, that if in ten years time I go to make a batch of muffins and this very buttermilk has disintegrated into dangerous spores, I will be complaining. 'Disgruntled of Wellington' demands a year's supply of buttermilk...or at least a voucher.
Posted by hungryandfrozen