Momentous times: Next week will be my very last week ever of university classes. On the 13th, it shall be my one year blogoversary. On the 23rd, Tim and I have been 'going steady' (or whatever other mildly nauseating term you want to apply to it) for three years. Stick around, folks because where we're going, we don't need roads.


We do need comfort food though. Despite the fact that it has officially been Spring for a whole month now, the weather is still regularly chilly (punctuated by brief, teasing bursts of sunshine) and so my northern hemisphere readers may well get the same kick out of this food as I did down here in New Zealand. 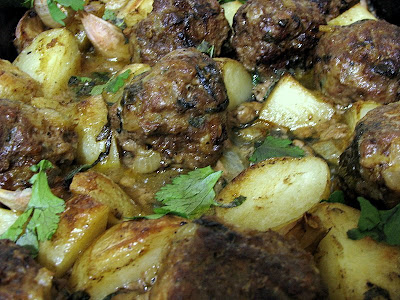 I have oft sung the praises of NZ food magazine Cuisine, which I believe is the classiest one on the market. Elegant yet functional, inspiring but attainable. Also kind of expensive for the average student, which I why I source out back copies at second hand book stores. I found this interesting sounding meatball recipe in the September 2004 edition, and I know, meatballs are meatballs are meatballs but this is utterly fabulous - warming, softly spicy, saucy and comforting. Here is my adapted version, although I'll cite the original proportions of ingredients. As I have a well-stocked spice collection and mince is always in my freezer, this was a very cheap meal. Not to mention that I got a sizeable bag of gorgeous wee new potatoes from the vege market for a cool dollar...

Don't be put off by the list of ingredients, this is so easy and mercifully doesn't use as many pots and pans as you might think. Also, the original recipe specified a jar of artichoke hearts as an ingredient, if you have some, be my guest.

Heat oven to 190 C. Heat a little olive oil in a frying pan, then add the onion and spices, stirring till the onions are soft and becoming fragrant. Add the spinach, cooking briefly till it wilts. Tip all this into a bowl with the mince, egg, and coriander. Squeeze it all together with your hands, roll the mixture into meatballs, and toss them in the flour. Using the same pan that you fried the onions in, brown the meatballs in batches, transferring them to a shallow oven dish as you go. In that same pan, cook the potatoes gently for about ten minutes, stirring occasionally. Add a spoonful of flour and let it absorb all the residual pan juices, then add the tomato puree and stock, bringing to a robust simmer. Carefully pour this over the meatballs, cover with foil (I admit I forgot to though) and cook for at least half an hour. 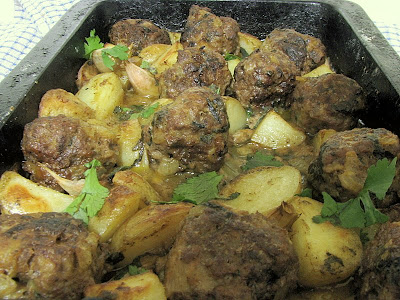 With spring comes asparagus, that wonderful vegetable that I've been waiting for since, well, since last October. A stroke of luck led me to find a generous bundle of it for a staggeringly cheap $1 at the vege market last week, and so we were able to have roast asparagus - one of my favourite things - twice with dinner this week. If you have not yet experienced the joys of this then amigo, read on and learn. 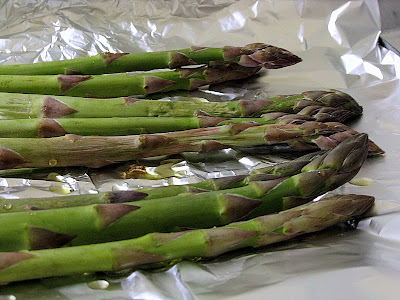 This is something I picked up from Nigella Lawson's marvellousmarvellousmarvellous How To Eat, but it's barely even a recipe. Heat your oven to 200 C, and place your asparagus spears on a foil-lined oven tray. Roll them in a little olive oil, then bake for 25 or so minutes till slightly crispened. If you have asparagus of the tough, stringier variety, you may need to trim an inch or so off the bottom. Serve sprinkled with a little good salt. This is near on perfect, but imagine rolling the spears in basil pesto before roasting would appeal also... 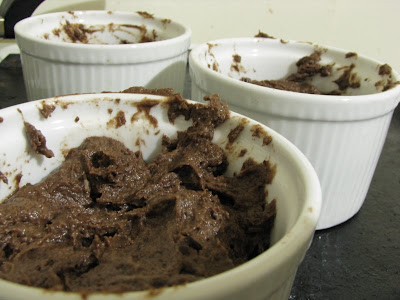 And of course, when the weather is cold I crave some kind of pudding. Also when the weather is fine. Either way, we haven't had a proper pudding in a while and after dinner on Thursday I didn't quiiiite feel ready to finish eating for the night. I played with the Chocolate Pear Pudding from Nigella Express, I've made it before but it's quite adaptable. Here it takes the form of Chocolate Banana Surprise Pudding, (the surprise being the unexpected square of chocolate that is nestled within the batter!) It is beyond simple to whip up. What I did was cream 150g soft butter with 125g brown sugar. I added an egg, 1 overripe banana, 125g flour, 25g cocoa and 1 t baking powder. You may need to add a little milk if the mixture is too stiff. This went into three 250ml ramekins - although I'm sure you could play with proportions - and I pushed a couple of squares of dark chocolate under the batter of each. These were baked for 25 minutes at 200 C. The tops are cakey and delicious while a spoon, plunged into the heart of the pudding reveals stickily saucy chocolately depths. Perfect with a spoonful of Banana, Pear and Dark Chocolate Sorbet melting into it... 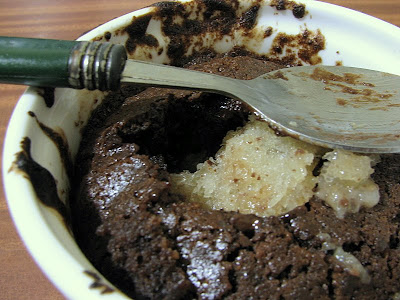 Last week I was fortunate enough to embark on my first business trip. I was taken up to Auckland because Smokefree, who I work with, were one of the sponsors of the Juice TV music awards, and there was a swag of signage that needed to be erected. I got to stay in a lovely hotel, meet some fantastic people, and attend the event. Here are some things I learned...

-Wellington is a nicer city than Auckland. Hands down.

-The people that work at Juice TV are awesome, friendly and welcoming.

-The NZ musicians present at the event seemed to think they were somehow above it all. I'm looking at you, Mr young blonde whippersnapper, late of Zed and now playing guitar with The Feelers. Hardly a career trajectory, so why are you so lacklustre on stage? Look alive! Furthermore, many of them chose to hang languidly outside the performance room hobnobbing with each other rather than actively support the bands on stage. I mean really. You're not Mick Jagger.

-Just because you are impossibly leggy and have doe-eyes does not mean you make a good TV presenter. It does still make you impossibly leggy though, to which I say *sigh*. Would I take good legs over a personality though? Well, perhaps not.

You may be pleased or disappointed to know that my night finished quite early, not with me snorting cocaine off a dolphin, but with a cup of tea and a good night's sleep. It was an interesting time though, and great fun, and I may be repeating the experience again come mid-November for the SouthernAmp festival...


Speaking of music, once more shall I plug dad's protest video on youtube because, well, it's still important to me. If you've watched it already, if you're curious, if you pretended that you watched it last time but didn't actually, help out our cause and please, see it by clicking here. If you have a youtube account, any comments of support would be wonderful! We are currently on 879 views which is flipping AMAZING for a video from the tiny tininess that is Otaua. While I'm plugging things I might as well give you the link again to this amazingly hilarious [title of show] video. Once again, if you are lucky enough to live in New York city, go see this sparklingly brilliant musical before it sadly closes. If you are like me and don't live in NYC, then watch the video because it's ridiculously funny. Even Tim laughed, which, given his weary suspicion of most of the Broadway shows I'm into, is quite the endorsement.


Next time: I make my own ravioli.