Email ThisBlogThis!Share to TwitterShare to FacebookShare to Pinterest
A very, very swift post from me - I know my exam is tomorrow, but Tim and I have studied ourselves into a brick wall and can nay do more. We've been watching some audio commentaries on The Mighty Boosh DVD (yes, we are earnest commentary-watching folk) and giving our brains a well-needed airing before everything we've crammed in there floats lightly out our ears.

Saturday's weather was beyond awful - gale force winds and pelting rain. Sunday, however, in typical Wellington fashion, was the complete opposite - an unutterably beautiful day. I purchased a pineapple at the vege market for a dollar and imagined I would sprinkle it with chopped mint and fresh ginger and serve it for a sparklingly healthy dinner. Then Tim said "or we could dip it in chocolate?" Brilliant. I was sold.

In fact I went one better, and used a recipe of the blessed Nigella Lawson's from her gorgeous book Forever Summer . 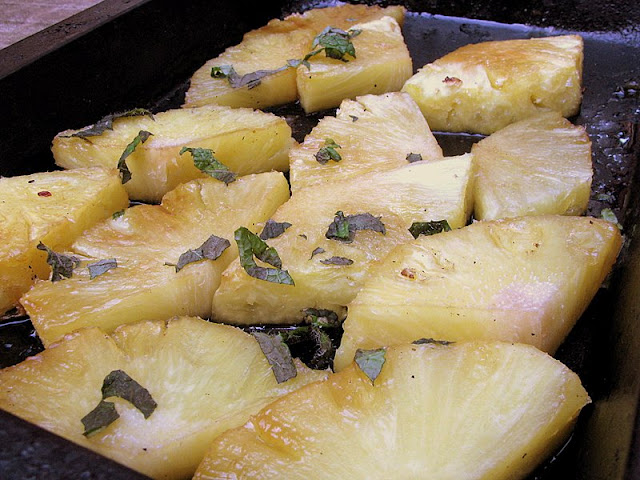 Preheat the grill to very hot (or the barbeque!) Slice the skin off the pineapple then chop it into wedges. If you like, thread them onto soaked wooden bamboo skewers or just leave them plain like I did. Lay the pineapple on a layer of tinfoil and sprinkle with the sugar. Pop under the grill till caramelised and deep golden in colour. For the sauce, simply melt the chocolate and stir in the Malibu and cream. Pour into a bowl for people to dip the pineapple in. I resolutely sprinkled the pineapple with mint though and it added its pleasant, reliably perky flavour to the whole thing.

You should probably know that we lowly (soon-to-be-ex) students don't carry anything as highfalutin' as actual Malibu. Instead I used a harsh splash of this Malibu doppelganger stuff of Katie's called - charmingly - "Wipeout." The look of Malibu in the same white bottle, minus the smooth rumminess. 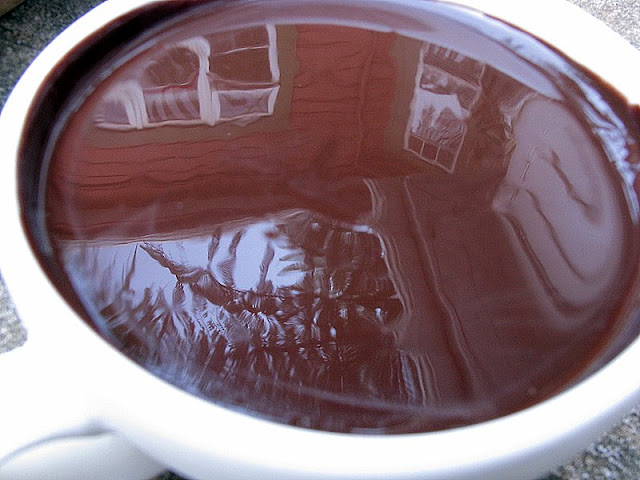 Above: Cool mirror effect on the shiny dipping sauce. It's probably the aluminium in the Wipeout liquor that makes the chocolate so reflecty. 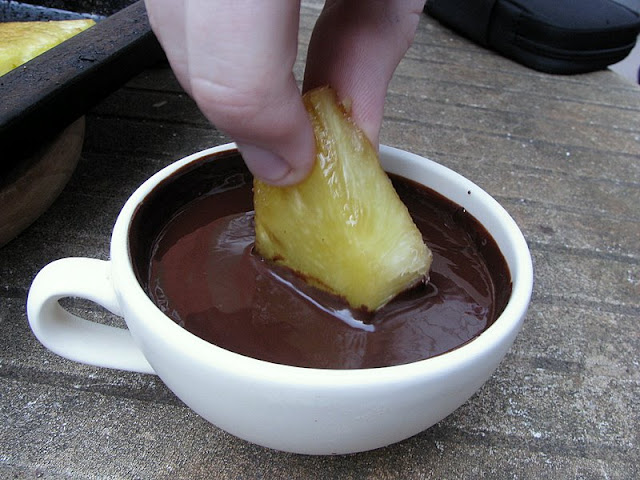 We ate dinner (a quick feast of steamed red potatoes, proper beef sausages, roasted capsicum and carrot sticks) outside because it was so glorious, and at 7.30pm we were still able to be comfortably al fresco with our pineapple. It is a wonderful pudding - the taste of scorched fructose and smooth, smooth chocolate mingling very pleasantly with each other, people leaning over each other sociably to access the fruit and sauce - heck, I'd go for two pineapples next time.

I haven't mentioned this so far because I've been so busy promoting the Otaua video (and in case you're wondering, the case is going on hiatus for three weeks so no proper conclusion yet) but if you like, clickety click HERE to witness a rather amazing thing. You may remember that I went on a plugging spree for the late Broadway musical [title of show]. Well it's over now, but some spry fans organised - and just let me try to explain this properly - a music video to '9 Peoples' Favourite Things', one of the songs from [title of show], using fans of the show holding up pictures of the lyrics. As in, one word per person. If all this makes no sense, watch the video anyway because Tim and I are both in it! Yayyy! Participation from miles afar! But actually, don't even try to look out for us because we zoom by in a flash and your retinae will chaff with the strain of it all. But there's still something for everyone. For Broadway fans, there's Jonathan Groff *swoons*, Patti LuPone, Shoshana Bean, Amy Spanger, Seth Rudetsky, Betty Buckley and Cheyenne Jackson *swoons again* amongst others. For the average punter, have fun trying to spot America Ferrera, Sarah Silverman, Jimmy Kimmel, TR Knight from Grey's Anatomy and for those who like to dip your toe on either side of the fence, check out the spunky Bebe "Lillith" Neuwirth. Follow the link in the grey box for stills and names, and you'll actually get to see me.

See, there was no need to flinch, I didn't even try and make you watch the Otaua video again. But if you're on youtube anyway with nothing else to do...As it is we are on a rollicking 1900 views, which is flipping amazing. Hopefully in three weeks we can make the change we want. In fantastic news, Otaua and the video itself were on the TV1 national news show here in New Zealand, they gave us a good two minutes and showed lots of clips of Otaua looking clean and lovely and untainted by oil plants. Hilariously though, they showed a clip of the mayor of Franklin, Mark Ball, and said that it was my dad. Not sure what the mayor thinks of this...

Speaking of change, in a day or two I'm guessing things are going to go absolutely nuts in America. I try to stay relatively nonpartisan - well, except when I don't - but even a bare plot summary of my beloved RENT which this blog is named for should indicate that I'm pretty left leaning. (Hint: transvestites and lesbians ahoy!) I couldn't be more hopeful that Barack Obama gets in as president, and that Sarah Palin fades quietly into obscurity (I know, I know, I'm not American, but let's put it this way, I've heard many, many women say that she in no way speaks for them by virtue of her gender). It's times like these that I get a particular song stuck in my head...'Louder Than Words',a stunning ditty from one of Jonathan Larson's earlier works, Tick, Tick...Boom! If the words look a little cheesy on paper, click here for a somewhat poor quality vid of the final Broadway cast singing it to get the full effect.


Why should we
Blaze a trail
When the well worn path
Seems safe and so inviting?

How, as we travel
Can we see the dismay
And keep from fighting?

Cages or wings
Which do you prefer? Ask the birds
Fear or love, baby
Don't say the answer
Actions speak louder than words!

What does it take
To wake up a generation?
How can you make someone
Take off and fly?

Why do we stay with lovers
Who we know, down deep
Just aren't right?
Why would we rather
Put ourselves through hell
Than sleep alone at night?

Why do we follow leaders who never lead?
Why does it take catastrophe to start a revolution
If we're so free? Tell me why - someone tell me why
So many people bleed

Cages or wings
Which do you prefer? Ask the birds
Fear or love, baby
Don't say the answer
Actions speak louder than words!
Posted by hungryandfrozen