Email ThisBlogThis!Share to TwitterShare to FacebookShare to Pinterest
A brief progress report on my last-minute preparations for the Christmas Dinner - which is tomorrow! - with no proper recipes yet because I don't have time to type them out. Why? Tim and I are on our way to a seventies party. He's dressing up as David Bowie, and after much pondering I'm going to be glam-rocking it up myself. I say pondering because it was surprisingly difficult to figure out what to dress up as (after Tim beat me to being Bowie that is). I mean, if I go as Charlie's Angels-era Farrah, I look like Laura in trousers. If I go as Debbie Harry, I look like Laura in a dress. It goes on. I'd probably make a convincing Stevie Nicks, but I'm not a Fleetwood Mac fan and I have this feeling that you should be somehow committed to what you're dressing up as. Stevie Nicks certainly seemed to be.

Anyway, that's not what you came here for - you came for the close-up photos of foodstuffs! But before I get into that, we've had some slightly unsettling news that Emma - the gluten-free flatmate - is stuck in Bankok due to the shootings at the airport that you have probably heard about in the news. She's on holiday there and was supposed to come back a few days ago - and then she was supposed to come back today - and now she's not going to be back till next Wednesday. We're all a bit nonplussed, and it's not going to be the same without her, but the point is that she is completely safe where she is and that the show goes on. 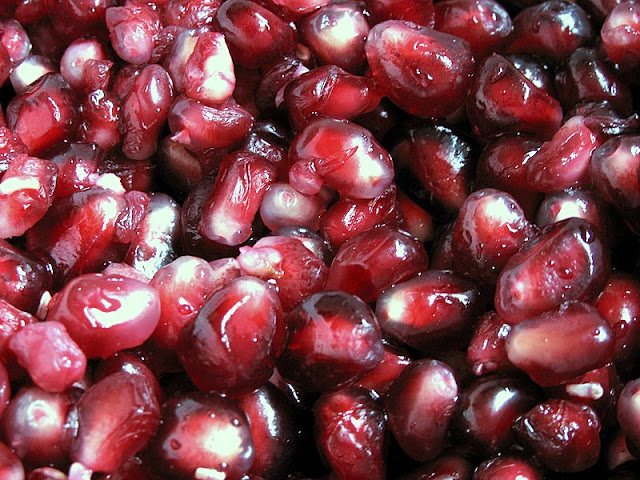 Have I mentioned this before? You could get rapidly and dangerously inebriated if you played a little game called "Have a drink every time Nigella mentions the word 'pomegranate' in her latest book." Pomegranate farmers the world over must fall on their knees and weep gratefully for Nigella because without her, the market would crumble. I know I myself, at her insistence, bought two of the oft-mentioned fruit from last week, and bashed out the seeds to freeze for later use. I couldn't resist taking a photo of the shiny, ruby-like seeds first because they really are every bit as pretty as Nigella says. Tomorrow they will be sprinkled, with capers, onto roasted capsicum following a recipe from the aforementioned Nigella Christmas. 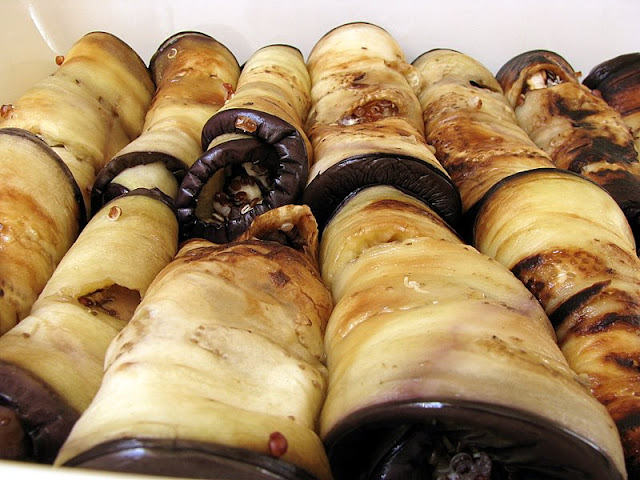 Today I made the involtini from Nigella Bites, and it is now stashed in the fridge ready for baking tomorrow afternoon. Although it's quite an involved recipe - frying the eggplant slices, making the filling, rolling them up, saucing everything - it's nothing too difficult. I adapted the recipe somewhat, only in the name of laziness - instead of making a simmered tomato sauce for these eggplant parcels, I just upended a couple of tins of chopped tomatoes over them. I'm sure Nigella would approve.

The filling, by the way, is a nubbly mix of bulghur wheat (although I substituted quinoa), feta cheese, pistachios, garlic, cinnamon and oregano. It's bound with an egg, but I daresay without that it would make a lovely salad. 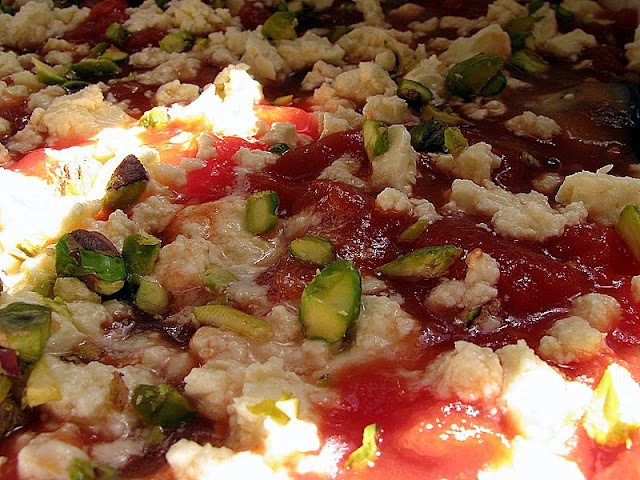 Above: Speaking of things Nigella would approve of, once it has the sauce poured over and is sprinkled with more feta and pistachios, the colours of this dish are entirely appropriate to Christmas. Doesn't it look pretty? 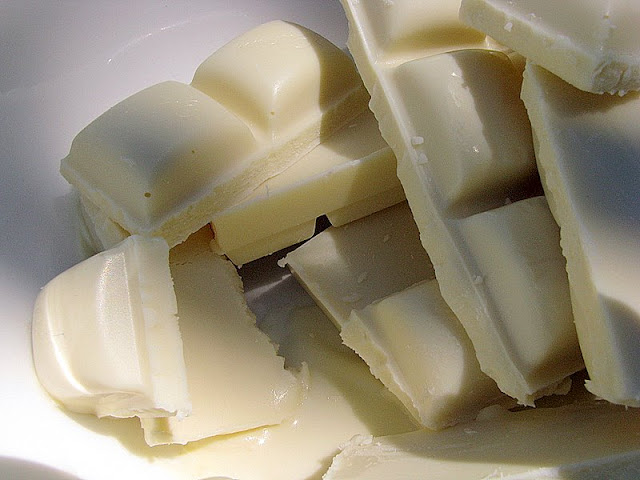 Above: And of course, there's pudding. I didn't end up taking many photos of the making process of these because both puddings involve stressful beating of egg whites (I know, I am my own worst enemy) and I didn't want to mess around taking photos and risk the whole lot going disastrously wrong. So all we have as proof of the White Chocolate Almond Torte - well, so far - is this picture of partially melted white chocolate. Due to my well-documented love of white chocolate it will come as no surprise that I had great difficulty refraining from burying my face in this bowl. 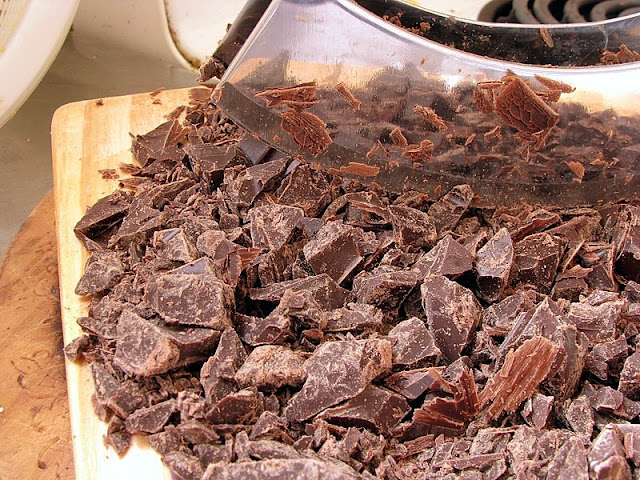 There's chocolate in the other pudding - the Other Torte infact - although someone did suggest "tortova" which I think is rather sweet. This is one that you need to prep in advance for, because there's a lot of chopped things involved - dark chocolate, walnuts, biscuits (luckily gluten-free biscuits crumble like, well, gluten-free biscuits) and dried apricots. All these are folded into a glossy meringue made from four egg whites, spread carefully into a lined 23cm caketin and baked at 180 C for about half an hour, then left to cool in the oven. I haven't actually tasted it yet obviously so I can't vouch for its deliciousness but it certainly smelled marvelous as it crisped up. 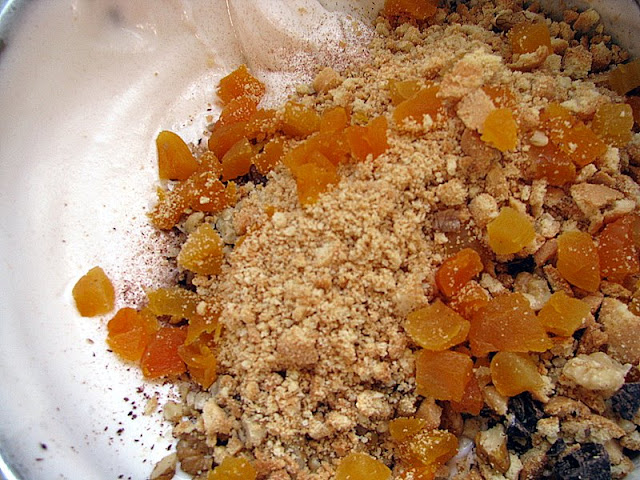 .
I did snag a quick photo of the mix though - the things I do for you! Meringue can be a fickle beast to deal with and I certainly didn't want to tempt fate by setting up several shots here. It waits for no one and needs to get into the oven without delay.

Next time you hear from me, the Christmas Dinner for 2008 will be over and - *faints* - it will be December already. With any luck there will also be amusing photos of Tim and I dressed up as glam rock scallywags "getting ziggy with it" (Tim's pun, not mine.) Actually, the nature of his multicoloured spandex jumpsuit ensures that all photos will be amusing.
Posted by hungryandfrozen