The month of June is a fast dame. August is lapping at my heels like a rising tide. July is more packed with commitments than a half-cup of brown sugar. Kindly excuse my ramblings, I found a nice notebook to write my thoughts in and am suddenly convinced I am an artiste, like almost all those people who carry notebooks to write thoughts in. I've been traipsing hither and yon across the country (well, I went to Dunedin for two days and a pub quiz last night) and haven't really had any meaningful eye-contact with the blog lately, but the month of June isn't really helping matters by going so darn swiftly.


I usually save my food-blog browsing for after I've finished a blog post of my own, because I'm in the right frame of mind and have the time to do it. I've occasionally wondered if it comes across as a little self-interested (oh hi, that looks delish, I haven't been here since the last time I updated my blog and wanted comments ohwhatacoincidence) but that's just how I roll. I roll without agenda or ulterior motive. Anyway while on such a blog-perusing journey after finishing my last post, I found on Thursday Night Smackdown a most enticing missive dedicated to chilaquiles. Mexican food here in New Zealand for the most part runs to bland, pre-packaged DIY enchilada kits, with dry, curling flatbreads and pre-spiced cans of watery beans. Not so bad, just I feel it's not a cuisine that has been thoroughly probed here. Which could be why I've never heard of chilaquiles before. They're sort of like huevos rancheros, only a bit more deconstructed and a lot less healthy. 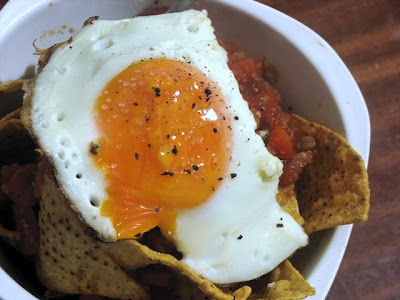 I gotta say, there was something about Michelle's post on Thursday Night Smackdown that really sold this idea to me. I was genuinely excited about making this recipe, which more or less comprises a spicy tomato sauce, tortilla chips, and a fried egg. By the time I got halfway through it making it all though I was starting to have my doubts. Why would anyone want to soak tortilla chips in tomato sauce? Would a fried egg on top of tortilla chips taste freaky at best? Why have I never realised how much fat is embedded into tortilla chips?


Despite the fact that my version was hugely low-rent - and despite the fact that my tastebuds were shuffling their feet dubiously - this is beautiful. Incredible stuff. There's something about the spicy sauce and the way it softens some of the crunch of the chips, and then the savoury fried taste of the egg kind of drips all over everything. Again, I hasten to add the disclaimer that my chilaquiles were seriously inauthentic, but they were fast and also used what I had in the cupboard. For those of you playing at home, I sauteed a finely chopped onion, several cloves of chopped garlic, a chopped capsicum and a diced carrot in a large pan. Once all that was soft, I poured over half a jar of spaghetti sauce and added a little minced chilli from a jar. After allowing that to bubble and thicken, I poured it over two substantial bowls of tortilla chips (chilli lime flavour, now with extra trans-fats!) and quickly fried two eggs in the pan, not really bothering to wipe it clean or anything. Once done to done-ness, the bowls had an egg each draped overtop and a generous bump'n'grind of salt and pepper. Obviously coriander would be ideal, but I just didn't have any and remain fairly unscarred by this omission.

The eggs really make it though. You have to buy good eggs. On a whim I purchased some GlenPark Woodland Free Range Eggs, thinking they were quite the bargain. Turns out my mathmatical prowess is exponentially deteriorating with each year because according to Tim I am wrong and they're actually bordering on heinously expensive. That said, they are, and I do not say this lightly, the single most delicious eggs I have ever eaten. I know, I know, I wax enthusiastic about everything but these eggs truly are exquisite. It's like the moment you first smell vanilla beans after a lifetime of using synthetic vanilla essence. It's heady stuff. Find them. Buy them. Eat. I will definitely be buying these again.

The flat we're living in is blooming ancient, and, as I've often whined, freezing cold. One of its particular idiosyncracies is having, at best, one powerpoint per room. This is 2009. We plug in a lot of stuff. Including a heater, without which one might as well go recline under a tree in the rain and read a book of an evening because inside really isn't much balmier than outside. What all this exposition is leading up to is that the other night - an hour shy of the premier of Outrageous Fortune - we blew a fuse. All four bedrooms and the lounge were unusable. And freezing. In a mad, generation-Y frenzy fuelled by lack of technology I dovetailed my two main interests at that point - staying warm/alive and blogging - by utilising the one room that still had power - the kitchen. I made banana muffins. And then got all up in the oven's personal space to try and defrost. If I could have, I would have curled up in the warming drawer. 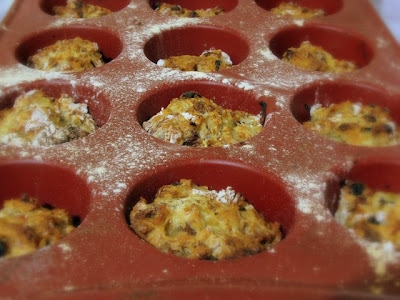 I've made these muffins before (recipe here and, after re-reading my old post I'm not sure if I could improve upon the description of them) and they're fantastic for when you feel as though there's nothing in the cupboard, because the batter is essentially tiny. Don't go eating any (I don't know if this is a warning necessary for sane people, but as you know I tend to eat a lot of mixture) because there's not a lot there. What is there though makes beautifully tender, cinnamon-warm muffins, the sort you'd never see in a cafe because those bulbous, dry, sandy $3.90 cakes (the sort that especially frequent airports and chain coffee shops) are de rigeur instead.

Tim got home at this point and with a mere manly flick of a switch on the powerboard restored the soothing hum of electricity to our flat. Just in time for Outrageous Fortune. Phew. Last night Scotty graced us with his presence to watch the second episode, and I didn't know which was more mesmerising - Kasey's magnificent bosom or the welcome presence of some character development in Judd. Scott and I also both agreed that an episode should be devoted to little more than the character of Van holding baby Jane. Clearly, Season 5 is going to be good.

Finally: The Tonys happened. Not here in New Zealand on TV of course, because basically no-one knows about them over here (that said, we have some bizarre programme placement choices made here, and why?) but importantly: Alice Ripley won best actress in a musical. Some say her speech is weird, some are getting strangely angry over it, I think she was truly magnificent. I wish I could speak in public like that. For what it's worth though, Brett from Poison's untimely collision with a piece of scenery could have been the best thing to happen to the already awesome show Rock of Ages - the clip of him getting smacked upside the head by a giant sign has been zooming round youtube and was actually on the news here. I admit to being wildly excited that the word "Tony's" was used on mainstream TV news.
______________________________________________

On Shuffle whilst I type:
Black Tambourine, Beck, from the album Guero (because Tim's currently obsessed with him)
Flume, Bon Iver, from For Emma, Forever Ago
Birdhouse In Your Soul, Kristin Chenoweth and Ellen Greene, from the Pushing Daisies soundtrack (this song is like crack and it uses the word "fillibuster".)

Next time: I realise the photography has been a bit up and down lately, that's because if I photograph stuff at night it looks awful, during the day, not so much. I'm not sure what I've got on the upcoming food agenda but I'm hoping for something a little more friendly on the eye.
Posted by hungryandfrozen