let the bun shine in

Email ThisBlogThis!Share to TwitterShare to FacebookShare to Pinterest
Tim whacked his knee on the bedframe yesterday (a common occurrence here, except I'm clumsier and shorter so my thighs are perpetually a fetching dappled shade of purple). I took advantage of his searing agony and got him to agree that we should go to dinner at La Bella Italia. An hour before we are due to leave the house, I remember that La Bella Italia is not open on the weekends. I don't know if this is karma or just standard issue stupidity on my part. I call stupidity, as I forgot that La Bella Italia is only a Monday-Friday joint and Tim did seem keen in spite of himself. Either way I feel there is some kind of proverb emerging... "Ask not the significant-other in deep pain to take you out to dinner, you don't need to pay $23 for a bowl of pasta to 'really communicate' with each other. The sharp teeth of karma bite ye once more!" But maybe not. I feel like it's a recurrent theme of my life that I get really, really excited about something and then it doesn't materialise. You'd think that now that I'm all grown and wise with 23 years under my belt I'd see these situations approaching and tamp myself down accordingly. Not so. I was really flipping disappointed last night that we couldn't go to La Bella Italia. We ended up having chilaquiles and watching DVDs of 30 Rock and Dexter like every other night which was fun, but still. La Bella Italia. The food just...slays me.

A similar situation has been happening recently. Bearing in mind that we're moving from up the hill in Kelburn down into the city centre, I said to Tim that we should have a coffee at Cafe Mode down the road and sample their seriously lush scones asap before we leave. Well we've been there seventeen thousand times in the last two weeks, and every single time they've been out of scones. Every single time. It's like wanting a baby or something. I'll start telling people that we're "trying really hard" for a scone. There's not a big window of opportunity - the clock is ticking! I need some kind of beeper to let me know when the cafe is scone-ulating!Sometimes random aspects of my existence can be kind of exhausting. But I will get my scones, damnit.

Okay, I'm pretty excited about this particular recipe so I'll launch straight into it rather than try and offer some kind of esoteric lead-in paragraph. Do you recall, back in April I made hot cross buns only to inadvertently turn them into burnt offerings instead. And if you don't recall, may this handy url jog your memory for you? Refusing to let this culinary snafu get me down, I sliced off the charred bits and froze the rest of the hot cross buns, relatively inedible as they were, to use down the line in a bread and butter pudding.

As we need to start using up any extraneous stuff lurking icily in our freezer, it occurred to me last week that it might be pertinent to make this bread and butter pudding already. I defrosted the hot cross buns (or cold cross buns if you will, hahahahaha) and while I was being practical, pulled out a massive slab of sheep that Tim's parents sent us back to Wellington with a while back. I know mutton isn't all that fashionable (which can only mean it's due for a wildly fashionable comeback in restaurants) but it really does taste good, especially when the sheep had been fortunate enough to live a happy life on Tim's parents' farm, baa-ing merrily with verdant grass nuzzling its hoofs. The idea of having an old-timey roast and bread and butter pudding for a Sunday dinner was hugely pleasing to me. 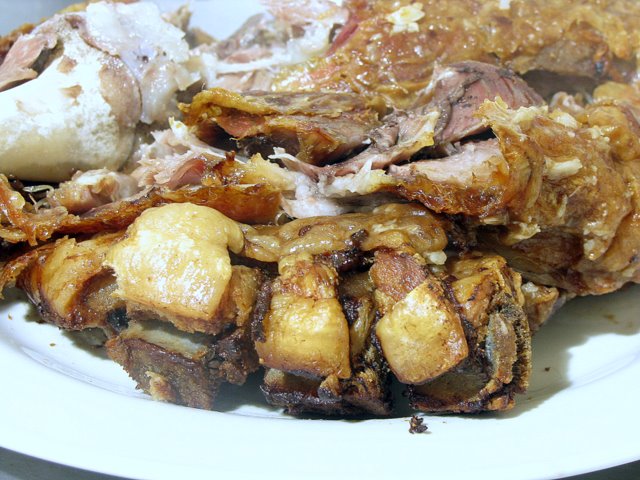 Carne con carne. All I did to the mutton was put it in the oven for about 5 hours on a very low heat (around 160 C). That's all. No spices, no oil, no tinfoil, no nothing. And it was beautifully tender, densely meaty and rich, and filled the whole house with the heavy perfume of roasted protein. I didn't serve it with a gravy, since rendered sheep fat just isn't that sexy. I did, however, bake some potatoes and other vegetables and it was an absolutely wonderful meal. A roast is so delightfully low-maintenance, you just bung it in the oven and that's it. The next night I made us shepherd's pie out of the leftovers, surprisingly quick when you don't have to actually cook the meat. And really, really good. 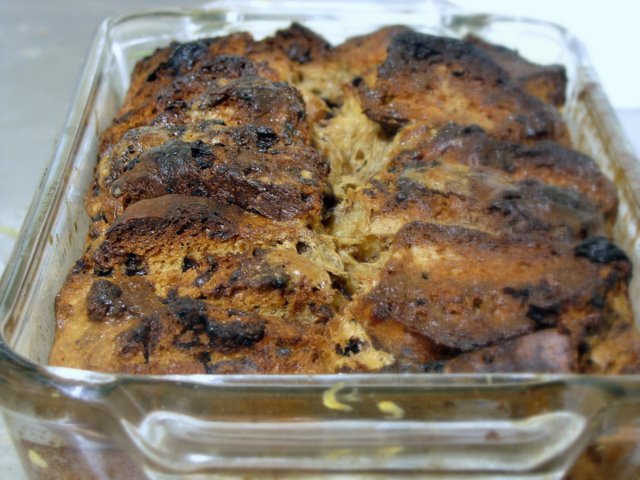 But the bread and butter pudding. I swear I could hear angels chorusing when I took a bite. It was exquisite. Considering it started its life as tough, dry buns, it was a makeover of Hollywood film proportions. Actually there isn't really a Hollywood movie that uses the makeover theme that I can compare this to, as in all those movies - Pretty Woman, The Princess Diaries, She's All That, My Fair Lady, Miss Congeniality - the "ugly duckling" is always blatantly stunning. What is Hollywood trying to impart to us? That brunettes can never truly be happy unless their eyebrows are brutally waxed to pop music in a montage scene?

Um, anyway, what I'm trying to say is that to look at, these hot cross buns were seriously nothing special, no glimmer of Anne Hathaway or Sandra Bullock beauty within their overcooked exteriors. Because I made the recipe up totally on the fly, I wasn't even sure if it would work or if I would end up just chalking it up on my list of things-I-got-disproportionately-excited-about-which-then-turned-to-FAIL. But it was an absolute minx of a pudding, the eggy custard giving the buns a soft, burnished, gloriously puffy texture. The spices - cinnamon, cardamom, ginger - were heavenly nestled against the warm, rich Marsala wine that I generously sloshed into the mix. The whole thing was just flipping marvelous. Gather round, my children. And listen:

Obviously, you don't need to go to the trouble of making your own buns and then overcooking them. Because we live in such a flagrantly heathenish age, I'm sure you can go down to your local supermarket and purchase hot cross buns at any time of year. So, buy some, allow them to go stale, and you're good to go.

Heat up the milk and about 1/3 cup Marsala in a pan. I don't want you to boil it, but it needs to be hot enough that you really wouldn't enjoy the whole lot being thrown in your face. Slice up the buns and layer across a loaf tin. Beat the butter and sugar together, add the eggs and whip as though you were making a cake. Slowly whisk in the hot alcoholic milk, then pour this crazy mess over the buns. Let this sit for about 10 minutes to absorb the liquid somewhat, then bake at 170 C (roughly 330 F) for about 40 minutes. Eat. Ice cream would make an ideal partner, as would cream or just plain, cold milk. 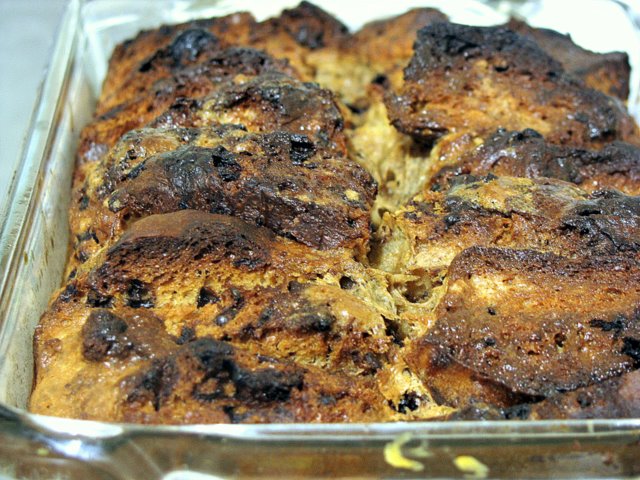 Next time: July is set to be pretty manic. So as yet, the next post is a mystery to us all. And yes, my title barely makes sense but I don't care, I'm on a Hair kick right now. Never mind that it doesn't make sense, the revival cast living it up on Broadway right now are absolutely stunning, listen to it enough and EVERYTHING will make sense.
Posted by hungryandfrozen