and my eyes more red than the devil is 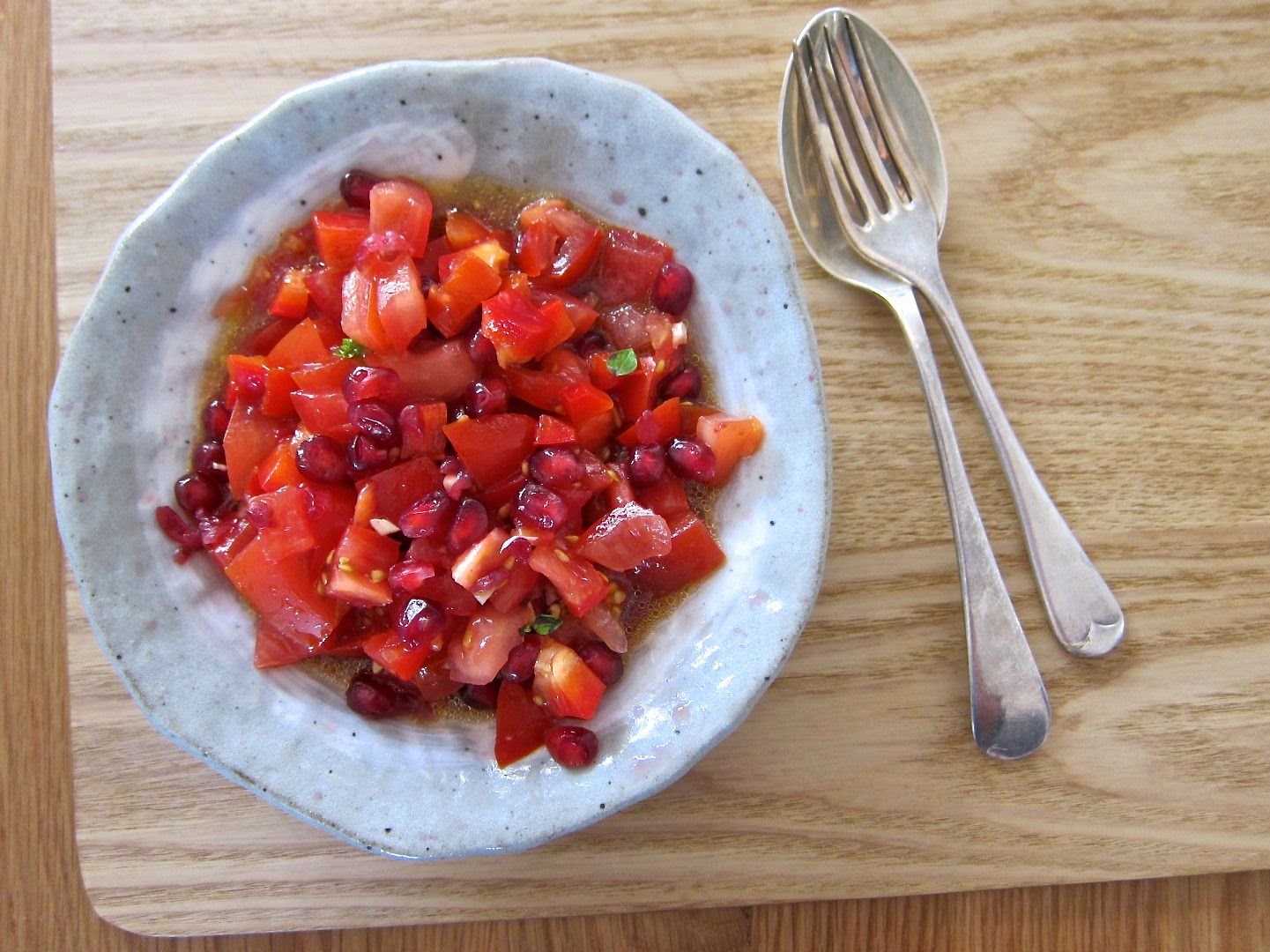 oh, just casually eating a bowl of rubies for lunch to absorb their power, you?


Ya girl is moving house again! 2014 was a year of four different addresses, so I'm tentatively hoping this time things are even marginally more settled, but if not, at least I'm used to it? I'm really looking forward to properly unpacking all my stuff when I slide into my new address in early February, and and am going to try sooo embarrassingly hard to make my room all dreamy and tumblr-ish (meaning fairy lights and sheer, draping fabrics. It will very likely be a tacky mess. But it'll be my tacky mess.) I am less looking forward to trying to spatula together a bond payment from behind the couch pillows of my bank account, but hopefully it all comes together. And in what is a coup for my co-dependency (I guess I also have coup-dependency, now that I think about it) the new digs will be just around the corner from where I'm currently lodging with one of my best friends, so I can still visit all the time. And continue my mission to become best friends with their cat Ariel. We're currently on a first name basis kind of thing, although over Christmas we did have a nap together and it was without exception the most amazing thing that has ever happened to me. 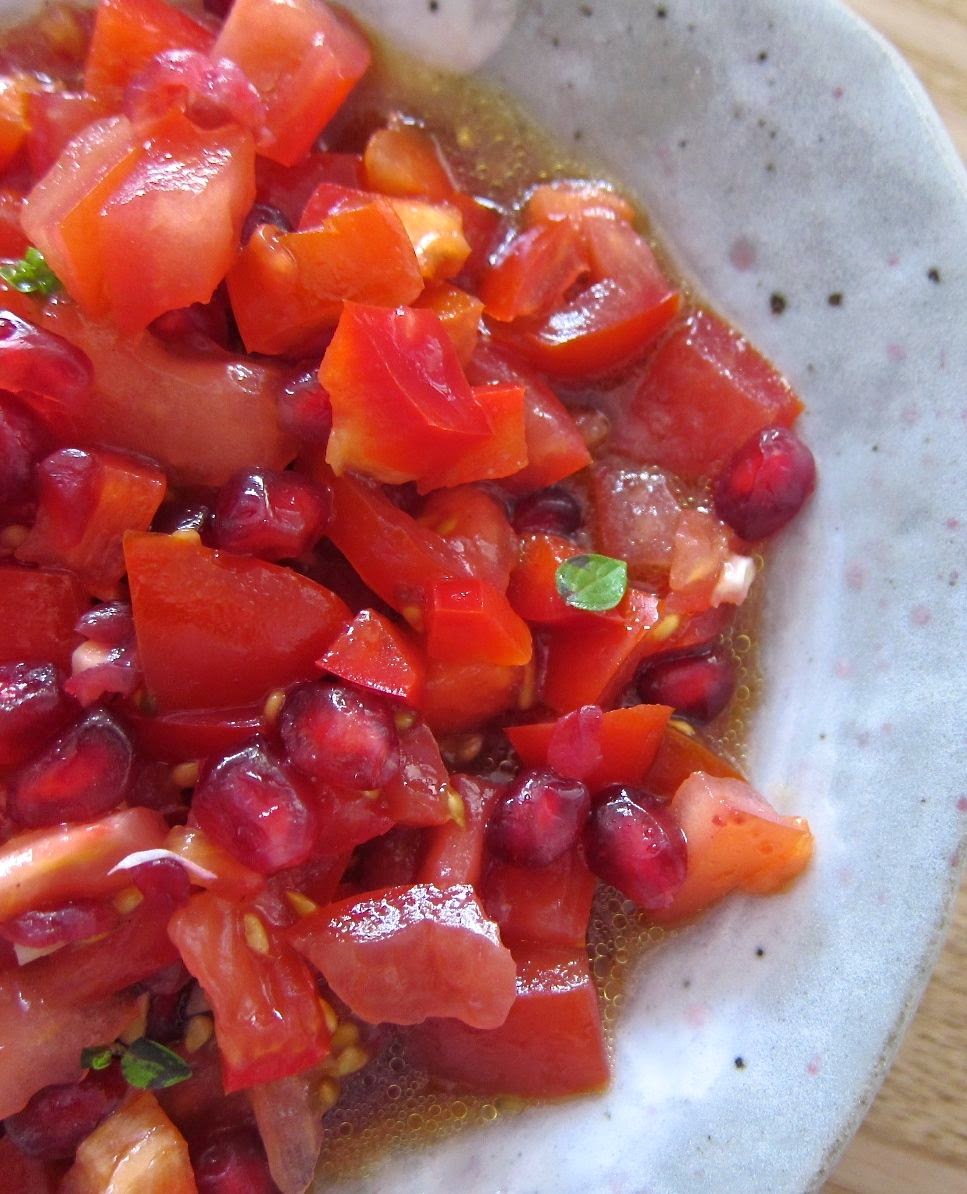 So, I am trying very hard to not spend any money that doesn't urgently need to be spent in anticipation of all the costs involved in moving house. I immediately bought a pomegranate after deciding this, but at least I put it to good use in this amazing salad, rather than how I usually treat spontaneous luxurious food purchases: gaze at it reverently for days, not daring to actually eat it, until it is completely withered and decayed and implodes at the slightest touch. (I also bought myself a coffee today but I admitted it so you can't scold me now.) Anyway, my dear flatmates had made this gorgeous tomato and pomegranate salad from Ottolenghi's newish cookbook Plenty More, and generously shared it with me. It was the kind of perfect deliciousness where you know you're going to try recreate it at the nearest possible opportunity, and so here we are.

This combination is glorious, so juicy and sweet and surprising and sunny, with the blissful crunch of pomegranate and the soft, juicy tomato and a tiny pinprick of smoky oregano and a dressing made with lip-smackingly sour pomegranate molasses and olive oil. And it looks like you're eating a bowl of damn rubies, I swear - so glossy and red and glowing. It's just the prettiest. While it causes me deep sighs to have to dice up all those tomatoes, keeping everything small means you can't tell where one ingredient starts and another ends and makes the pomegranate just as much of a star as anything else, instead of a garnish. It's just spectacular, okay. I love being surprised by food in the same way that I love being surprised by music - you know when you hear a new song and suddenly think yes, how did this song not exist in my life and I can't believe someone brought it to life out of thin air just when I thought all the songs that could possibly exist had already been written. Food can be like that too. 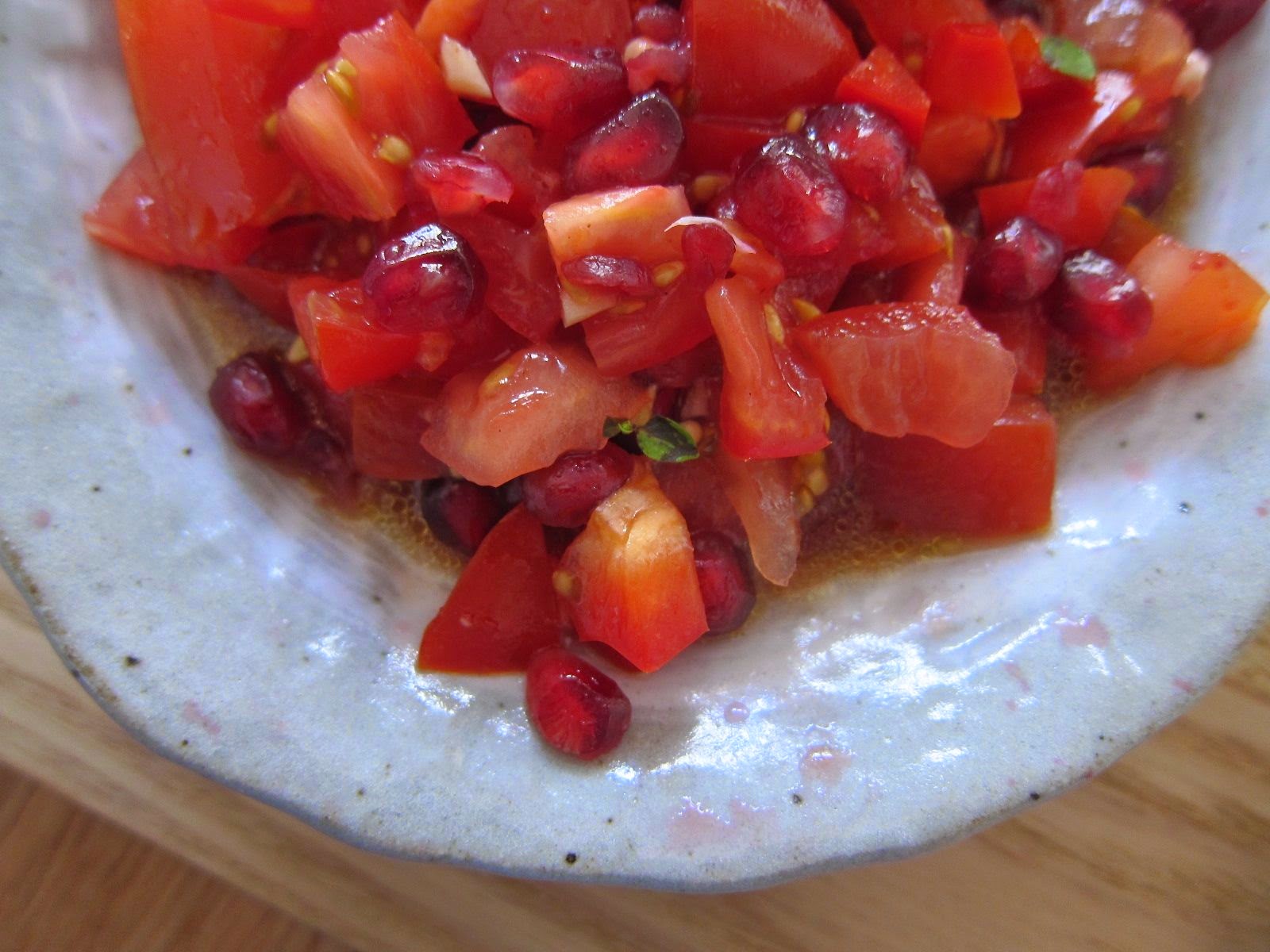 a recipe by Yotam Ottolenghi, from his book Plenty More

I've left his recipe pretty much as is here, but like, the tomato selection at the supermarket was no fun, so I made do with some cherry tomatoes, vine tomatoes, and regular tomatoes. The dressing is so full of life that it'll embiggen some fairly pale produce, but try to make sure at least some of the tomatoes that you're using taste like tomatoes. Oh also I left out the red onion but whatever.

Mix the diced tomatoes, capsicum, and onion together in a bowl. In another bowl mix the garlic, vinegar, pomegranate molasses, allspice and olive oil and stir this into everything. Either transfer everything to a big flat plate, which is Ottolenghi's recommendation, or leave it in the bowl, which is what I did, and then sprinkle over the pomegranate seeds and oregano. Drizzle over some more olive oil. This benefits from plenty of salt, so do some stirring and sprinkling and tasting till you're satisfied. That's it! 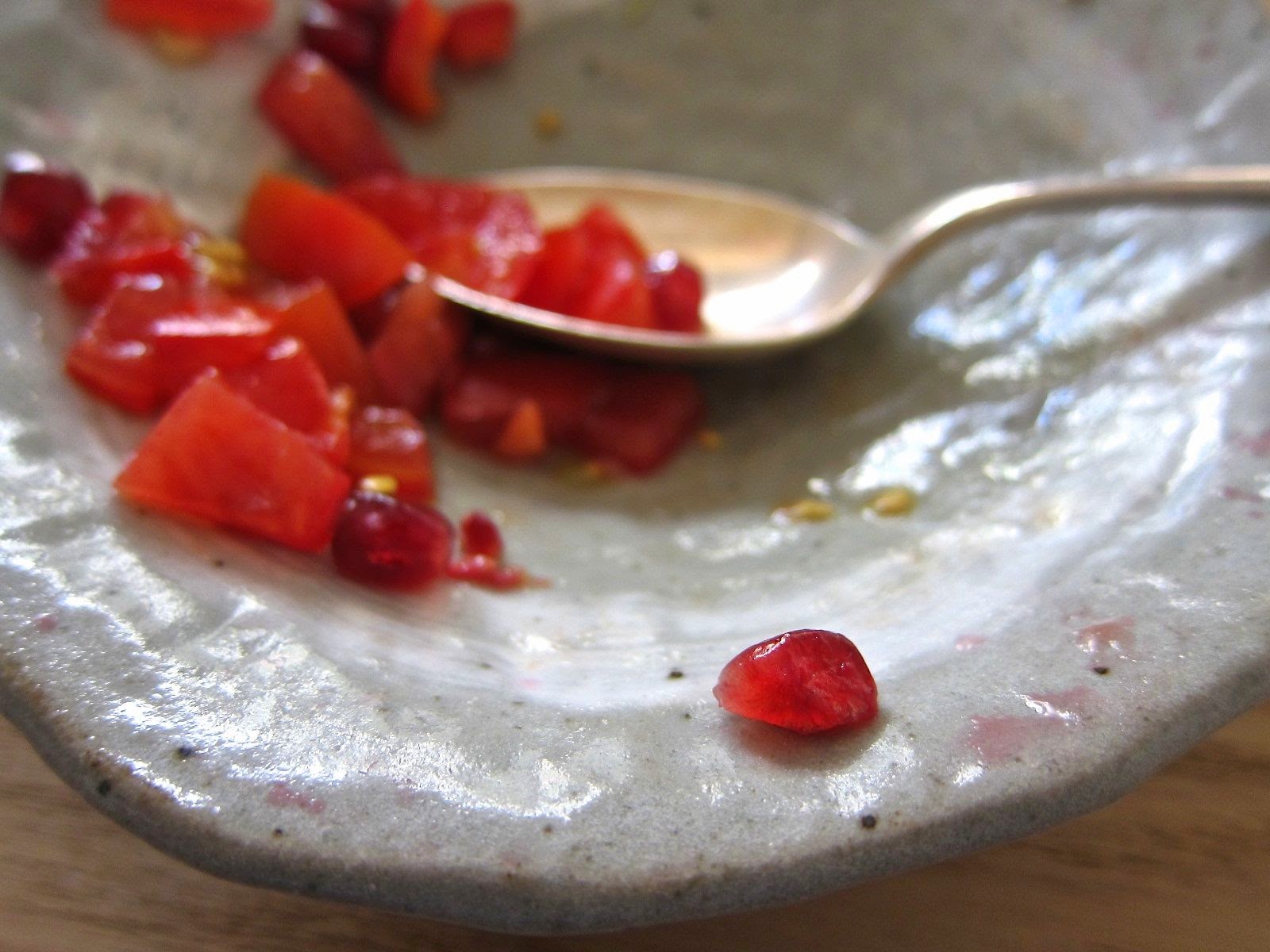 red, the blood of angry men, tea, a drink with jam and bread (oh wait.)

This is almost ludicrously nourishing and vitamin-rich, which is a pretty cool side-effect of eating something so massively delicious and beautiful. It's the full package. I ended up eating 90% of it just as is by the bowlful, but it's obviously going to make anything else amazing if you serve them up together - halloumi springs to mind, but then, halloumi always does.

As well as being frugal, planning to move house, and smugly eating vegetables, ya girl is also dying her hair. This is of course something that people do all the time, since the beginning of time, but I've made it 28 years without a single drop of dye touching my hair and so it was kind of a big deal for me. While there were slight "what have I dooooone" vibes to start off with I've had a ton of fun bleaching and toning and tinting and generally wreaking havoc upon my poor mop of hair, and have ended up reaching more or less what I was aiming for, what I call Sunset Hair. (It also might look like a sunrise of the tequila kind, according to Kate, but I'm cool with that. Tequila is delicious. I do hate the Eagles song of that same name though.)

The colour is a little mellower than this in person. Oh, and I love it! It's funny how as soon as you modify your appearance in some way it's suddenly no big deal and just the appearance you have and it doesn't seem like things have ever been any different, you know? And it's just hair. It grows back. Mine grows at a suspiciously fast rate, so a total do-over is not implausible.

sometimes there is nothing you can do except curl up on your bed and listen to Lana Del Rey's Born To Die and Taylor Swift's All You Had To Do Was Stay a few hundred times over. (It's really really hard to find a link to Swift's song online, soz, however if this means you seek out the entire album then: you're welcome)

The Ting Tings, That's Not My Name. This song came on In The Club recently and it is just such a great song to jump up and down with friends and total strangers to.