rise up wise up say it loud 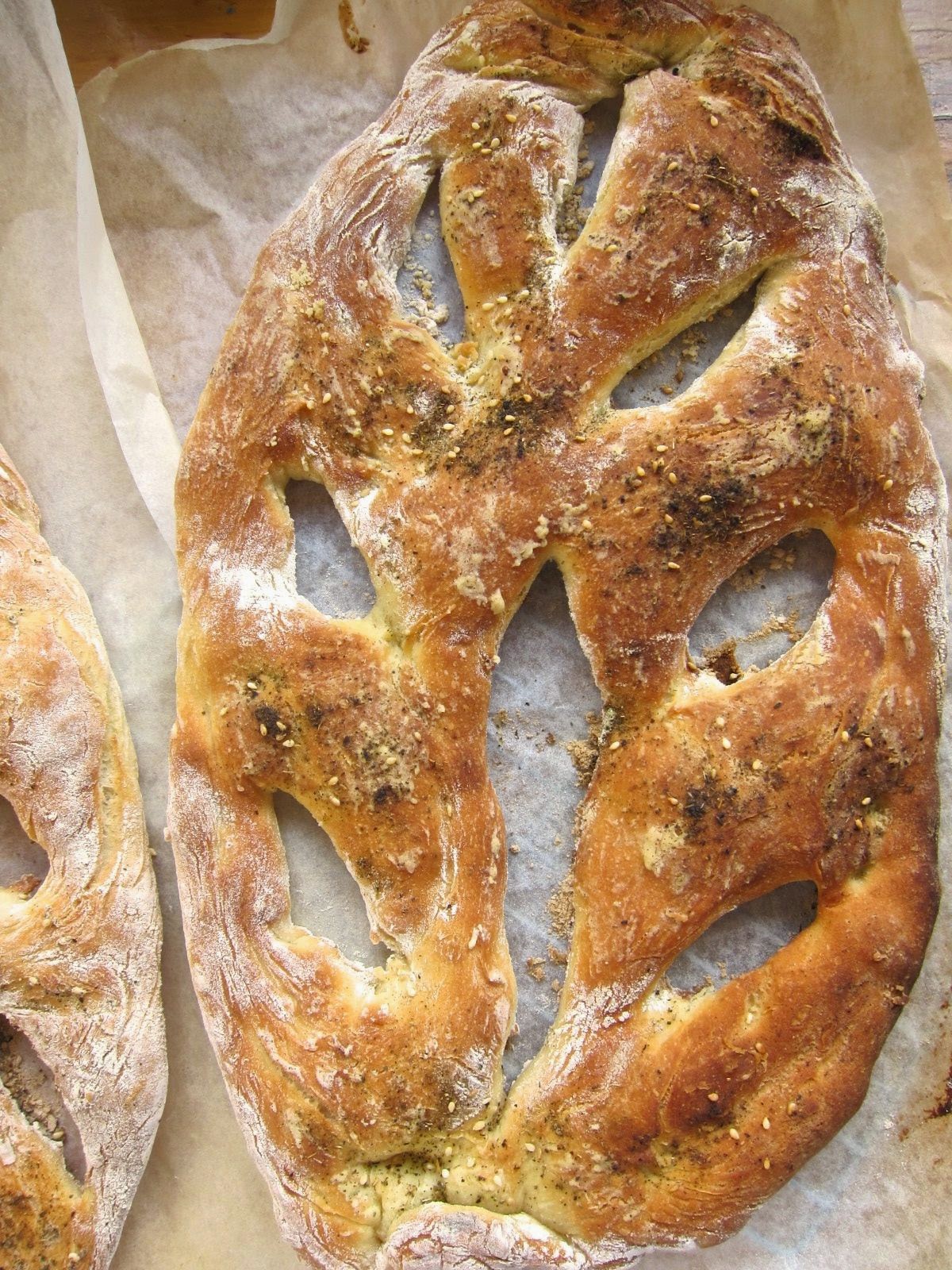 greet the new year with arms and bread wide open

On New Year's Day, my best girls Kim and Kate and I crawled into a small tent, away from the angry heat of the sun, and did tarot card readings for the year ahead. The tent was already up and we were at a barbeque/picnic thing, we didn't just go into a field and purposefully erect a Tent of Mystery, although that would've been pretty neat. Next year? The cards were from The Wild Unknown and each design was so utterly beautiful that I want the whole lot of them tattooed all over my body. The card that I ended up picking as my overall theme for 2015 was not the funnest but when I found out the meaning, I was like UGH you accurate damn tarot cards. It is all about not deceiving myself or being deceived, seeing reality instead of what I want to see, and not being sucked in by wishful thinking or being stuck inside my own head (two things that like, define me currently.) So it's not quite "a thousand riches shall befall you instantly and you can chill out indefinitely" but it's very wise and for someone who needs to take such advice on board, I'm sorta impressed with myself for instinctively being drawn to this particular card when I was choosing from the pack, instead of gravitating towards something nicer but less direct. 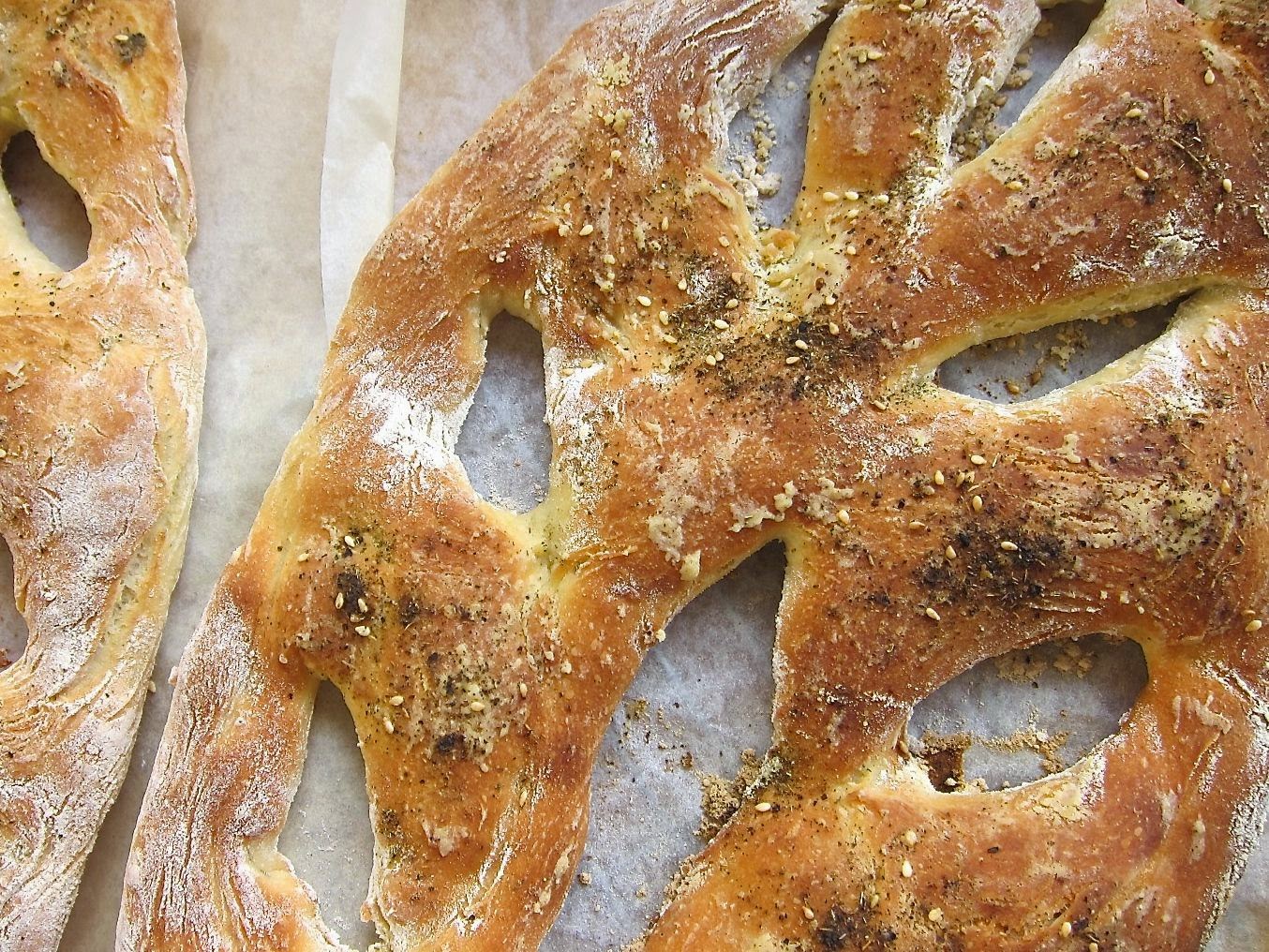 Another thing I did on New Year's Day was get up early and bake bread with my own two hands, despite being out verrrry late the night before dancing wildly to Beyonce (the only way to end the year since she was my soundtrack for the entirety of it.) Am I a hero? Yes. Although, as far as they go this is a nice, unthreateningly simple bread recipe, which requires no difficult ingredients, very little kneading, and the deep characteristic slashes in the dough make it eye-catchingly gorgeous. Which means that you can loudly and obnoxiously announce "Oh, just some simple rustic artisinal exquisite Italianate bread" when you place it at the table in front of people.

This particular bread, with its leafy, sliced-open facade, is known as Fougasse. When I was a youth I used to claim that fougasse bread was my favourite food - if I was ever asked - because I tried it once from a bakery in Titirangi with my family, and was deeply impressed with it, and I guess, also with myself. I think my train of thought was that it made me sound loftily sophisticated, which when you grow up in tiny rural farmland with big city dreams and a hearty respect for Stacey McGill, is apparently very important. No-one actually cared about fougasse being my favourite food and the only impression it gave off was (an accurate) one of insufferableness. But at least my tastes weren't misguided! I wasn't wrong! Because fougasse bread is highly delicious. 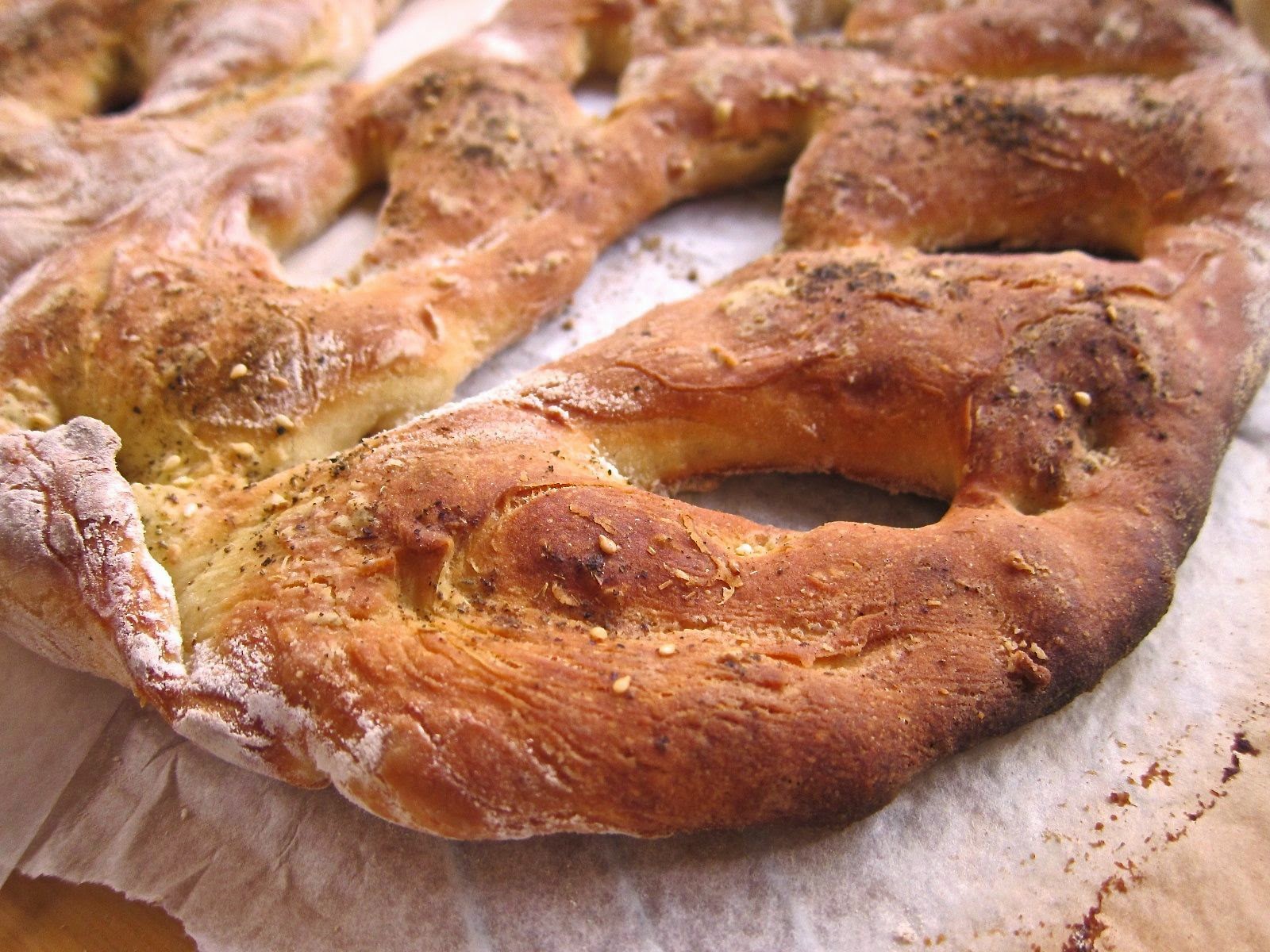 This recipe produces two loaves (one of mine was much larger than the other because when I divided the ball of dough in half I didn't really get the 'half' bit right) of chewy, airy, crisp, wonderful bread. While it would be a fine accompaniment to literally anything (including another loaf of bread) probably my ideal way of eating it would be like this: just myself, sitting at a table with an entire loaf of fougasse, a bowl of very good olive oil, and maybe some balsamic vinegar and sea salt. And some wine. 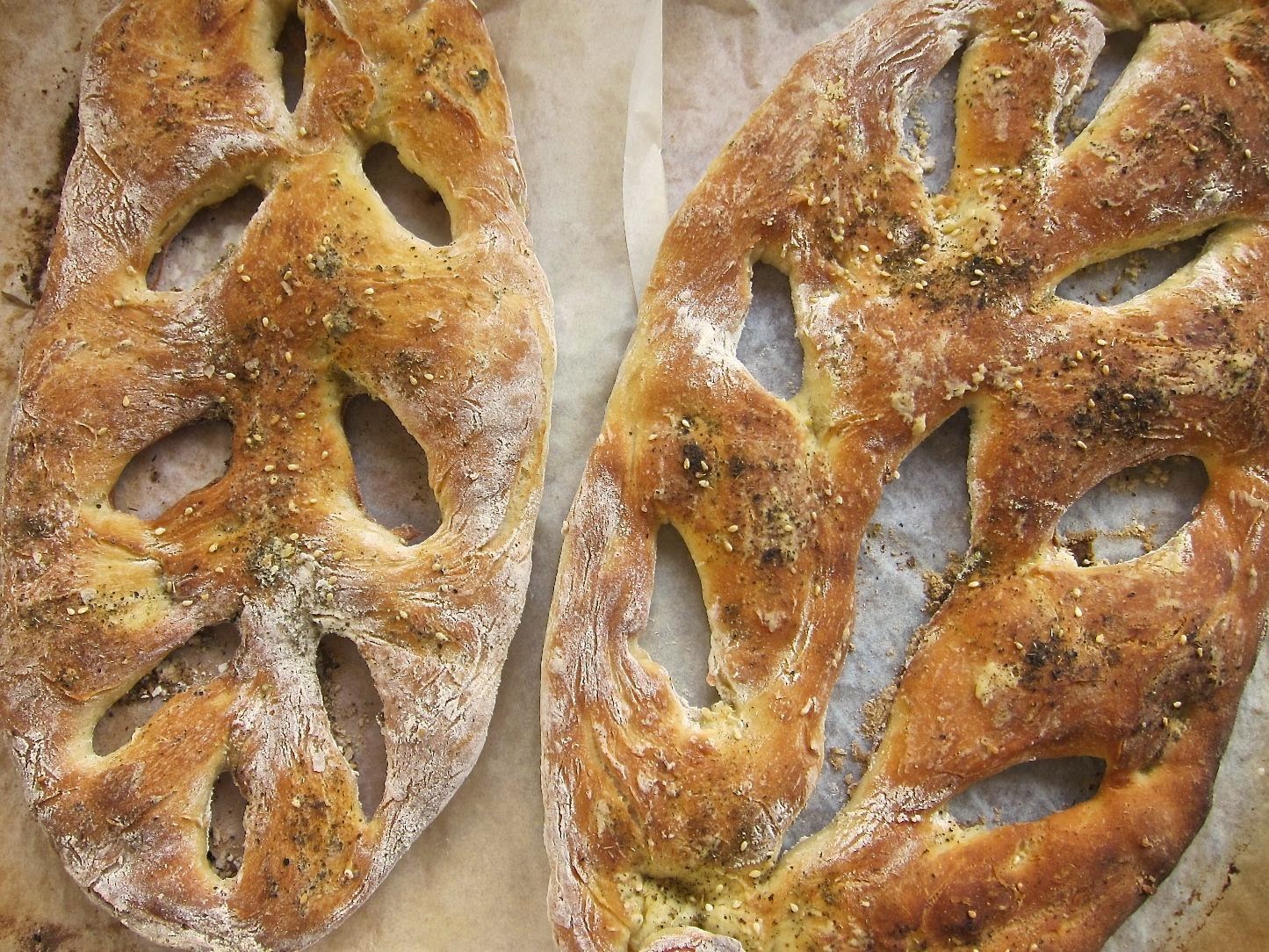 recipe by myself, mashed together from a bunch of different recipes I read online. The instructions look scarily lengthy but I just like to hand-hold you through anything that might be slightly unfamiliar or confusing.

500g bread/hi-grade flour
one sachet dried yeast
two teaspoons sea salt or some similarly fancy sodium product (or one teaspoon regular salt)
one teaspoon sugar
one and a half cups water
one tablespoon olive oil, plus more for brushing
dried herbs of your choice for sprinkling over - I used za'atar, a mix of dried thyme, sumac, and sesame seeds. Some grated parmesan would be rad here.

In a large bowl, stir together the flour, yeast, salt and sugar. Slowly pour in the water - just cold tap water is fine - and the oil, and stir together to make a sticky mass. Knead the dough either in the bowl or on a floured surface, pushing it away with your knuckles and folding it over and repeating, decisively, adding a little more flour or water if it seems to require it. However, it should come together on its own. When it's ready, the dough should be a smoothish, slightly springy ball. Put the dough back into the bowl (you might want to wash and dry it first) and cover with gladwrap/clingfilm.

Allow the dough to rise in a warmish spot - a sunny windowsill, a hot water cupboard, something like that, but don't stress too much about temperature, just on the bench is fine - and in an hour's time it should be puffy and doubled in size.

At this point, set your oven to 250 C/480 F and put an oven tray in there to heat up with it. Place a large sheet of baking paper on the bench, cut the dough in half, and carefully transfer half of this dough onto the baking paper. Use your fingers to gently push it out into a large, rough oval shape - the idea is to retain lots of air, which is why you aren't using a rolling pin - and when you're satisfied, use a sharp knife to make cuts in it to form a kind of leafy pattern like I have done in the pictures here. Spread the slices apart with your fingers (otherwise they'll merge back together when you bake them) and then brush the loaf with a little olive oil and sprinkle over your sprinklings of choice - as I said in the ingredients, I went with za'atar. Cover loosely with gladwrap/clingfilm and allow to sit for fifteen minutes, which will help it puff up a little. Finally, open the oven, being careful not to blast yourself with the heat of it like I did, and carefully pick up the piece of baking paper with the dough on it (it's not that hard to transfer it, but like, don't wave it around or anything.) Place the baking paper and dough straight onto the oven tray and bake the loaf for ten to fifteen minutes, until deep golden and bready-looking. While it's baking, get another sheet of baking paper and shape the second half of the dough as per the instructions above, and once it has rested for fifteen minutes, bake that one. Yayyy, two loaves of bread! 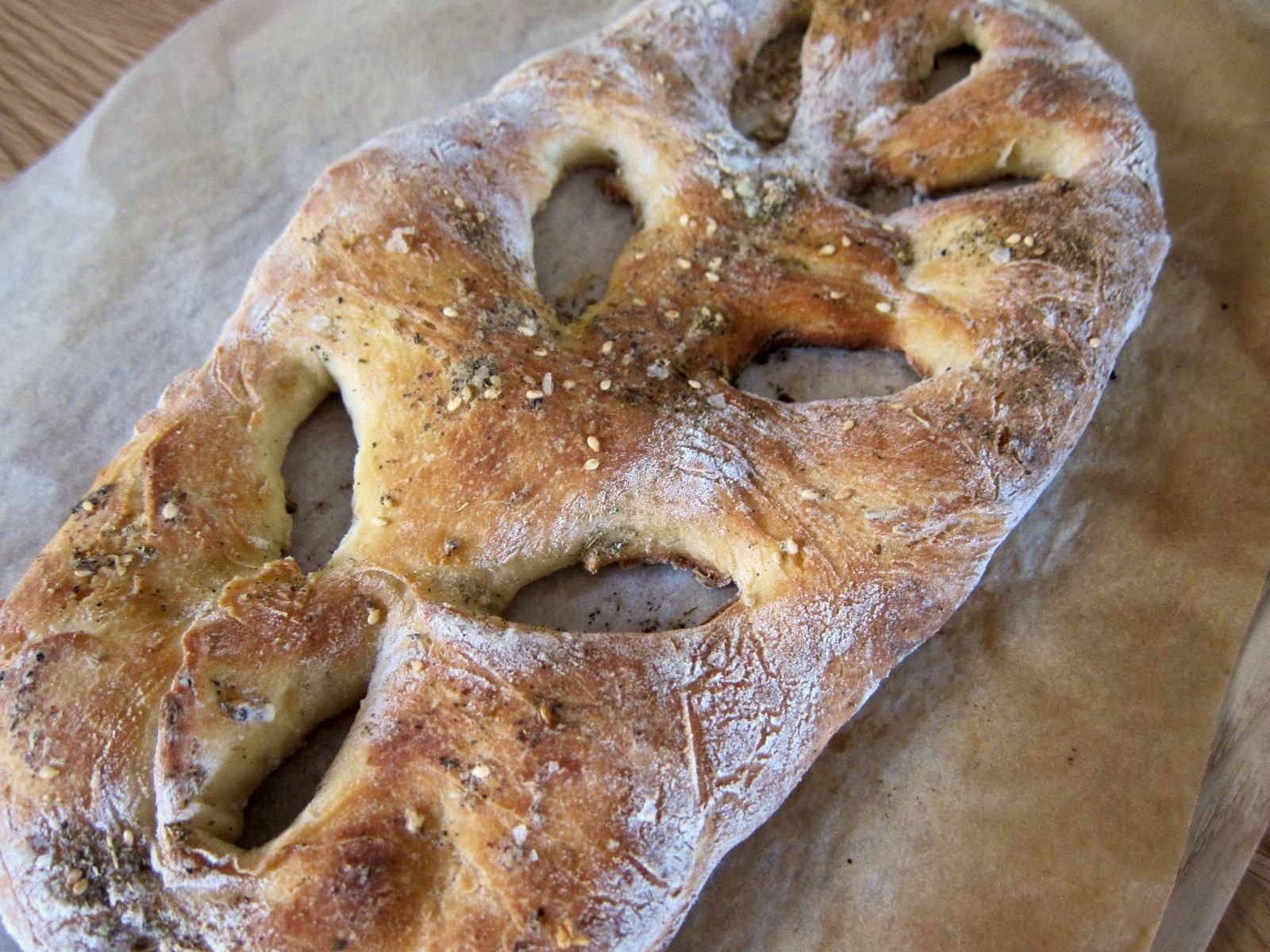 Nicki Minaj, Pills'n'Potions and Azealia Banks, Soda. I feel like these two sad, sweet, dreamy songs go together well. Also, both these women have new albums out and they are killer, go listen, go listen.