let's go dip it low then you bring it up slow 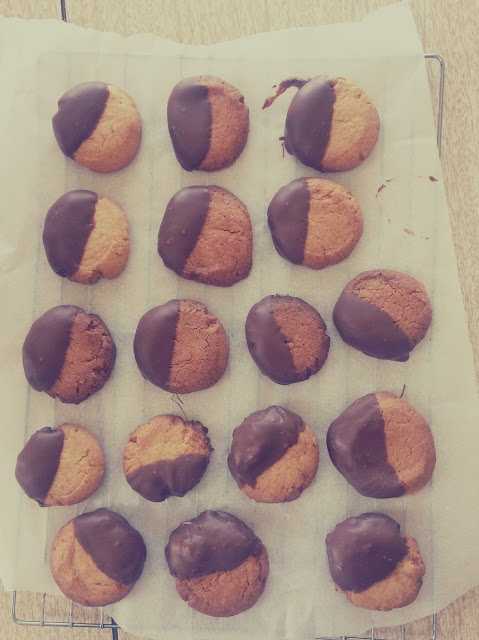 Oh man, I started writing this blog post the other day and concluded that one of the good things about the past week or so is that I haven't been sick for once, and then I woke up this morning feeling all woolly-headed and tender-eyeballed and sniffly and grubby and generally like a pile of dirt with a sad face drawn on it. This has been the sickliest winter, and I'm so unimpressed - can someone with a better sense of authority than I please tell my immune system that it's grounded for the next month with no TV? Am crossing all fingers that it's a shortlived burst of grime-lung as opposed to the return of the flu.

Other than my frustratingly delicate health, things have been thoroughly quite good of late: some working, some cooking, some hanging with friends and their beautiful dog while watching Buffy, a ludicrously late night out dancing, a day spent dozing in bed without - miraculously - getting angry at myself for not achieving anything with my time, and some whisky and movies and pizza and the batty latest season of America's Next Top Model with my girlfriend. The only real thing making me frown (prior to feeling sick again) has been processing my feelings about the mid-season finale of Pretty Little Liars, (if you have feelings about that then friend: I am your girl to discuss it with), plus some unfairly painful cramps. Which were probably brought on by Pretty Little Liars, to be honest.

Importantly, there were also cookies! I made these about a week ago, simply because I felt this wiggly need to bake something. Overwhelmed by the internet when I went looking for inspiration (y'know, it's all either triple backflip oreo stuffed red velvet bla bla bla cookies or raw high-protein dust cookies) I attempted to narrow down what it was I had in mind, which was: just something nice, okay? After some ineffectual writhing I eventually came up with this non-threateningly simple yet wonderful recipe, where they're fairly plain but made with lots of brown sugar and dipped in milk chocolate. The where the end result is a little chewy, a little crunchy, and a little meltingly shortbread-like. And a lot smug-inducing. 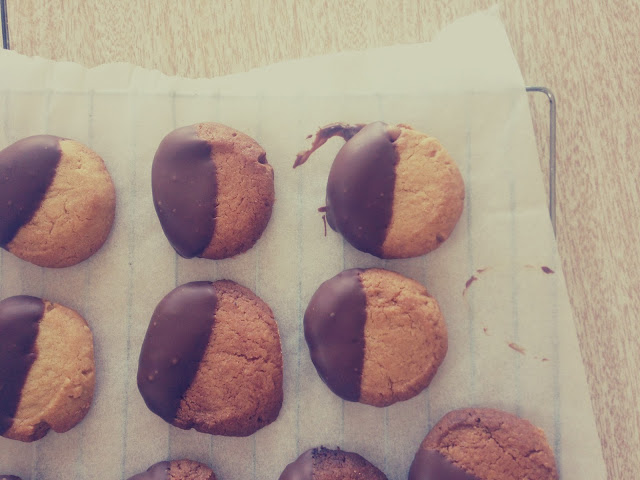 I took some to work to share because I am a literal earth-angel, and gave some to my girlfriend to say "yay it's our six month anniversary but here is a low-key token of my affection or whatever it's no biggie jk jk it's really amazing I am the sincerest"; and ate the rest in bed by myself, and by all accounts, especially my own, they were utterly delicious. It's always promising when the uncooked dough tastes so good that you consider retiring to your boudoir to eat the lot and pretend you can't hear when people ask you where the cookies are that you said you'd make.

a recipe by myself

Okay so all you need to do is: mix stuff together, roll into balls, bake it until it's cookies, but I am a talky lass and like to hold your hand through the process. What I'm saying is, the long recipe below might make it look like this is hellaciously complicated but it's not, promise.

Beat the butter and sugar together with a wooden spoon (or whatever! a rudimentary stick you found in the garden! A 30cm ruler! Don't let me put you in a box) until it's all light and creamy and fluffy and tastes incredibly delicious. Crack in the egg and continue to beat the mixture till it's even lighter, then carefully fold in the flour and baking powder - at this point it's very easy to fling stuff everywhere if you stir too vigorously. My dough looked a little dry and crumbly and like there was far too much flour but if you keep working it and clump it together with your hands it should form a pliant, stiff dough.

Refrigerate for half an hour- which is boring, yes, but this step helps the cookies to not spread too far when they bake.

Roll the cookies into small balls, maybe around the size of an unshelled walnut, and flatten them slightly using the back of a teaspoon. Bake them for around 12-16 minutes until they're lightly browned. I got a little distracted on the internet while they were baking and so some of mine are more browned than they oughta be, but they still tasted good. However, they will firm up and continue to cook a bit as they cool, so trust your instincts and remove them to a rack to cool when you feel they're ready. Repeat this with the remaining dough.

Melt 250g milk chocolate in the microwave, or however you do it, and dip half of each cooled cookie into it. Sit them on a sheet of baking paper till they're set, then they're finally ready to be eaten. 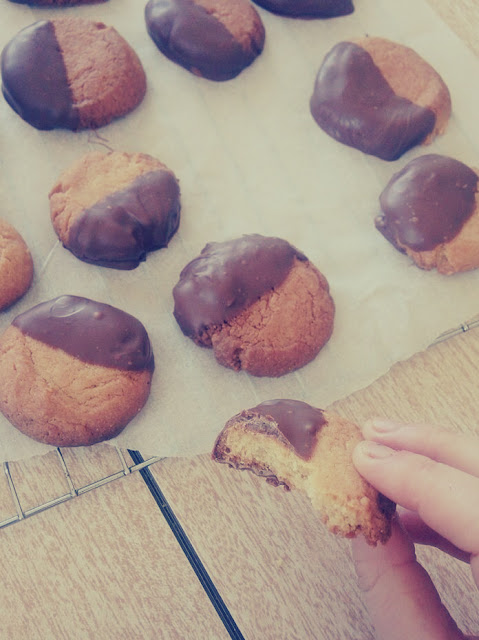 These would be just lovely on their own but dipping them in chocolate makes them spectacular spectacular - milk chocolate is gently sweet with a creamy, slightly caramel vibe which works so well with these cookies. I know dark chocolate is considered to be the best kind but it's honestly just not that fun to hoof into, all bitter and miserable and throat-coatingly cocoa-dark, and that kind of distraction is not what I want for these beauties. The way your teeth sink through the thin yet lightly crisp layer of chocolate into the crumbling, buttery cookie below generates a feeling that I can only explain by pointing you towards the hearts-for-eyes emoji. 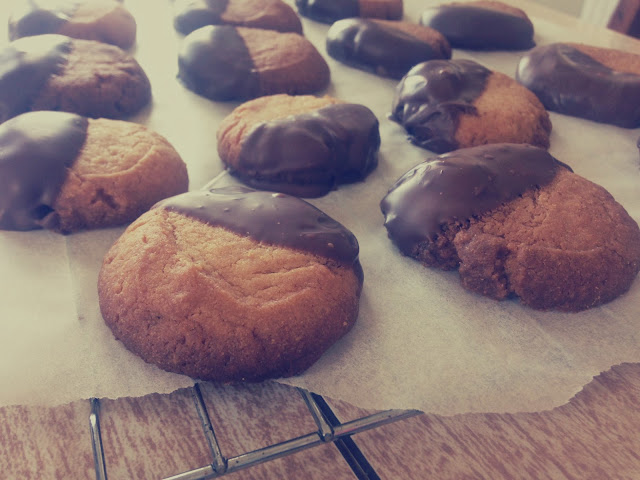 Lana Del Rey, High By The Beach. I love this woman so much and am loving the unimpressed vibe her lyrics have taken in this dreamy new song of hers.

Men Without Hats, The Safety Dance. What care I that this song is literally the most dorky thing on earth? I love it so much, it's so earnestly jaunty and happy and also strongly echoes my own feelings about dancing. It's on the work playlist and it's honestly quite dangerous: the first time I heard it I was so excited that I hurled a hot chocolate to the ground, making the title of the song a dark omen brought to fruition, really.
_______________________________________________________________
Next time: Another I Should Tell You interview, wheeeeeeeee!
Posted by hungryandfrozen