looking through a glass onion

Email ThisBlogThis!Share to TwitterShare to FacebookShare to Pinterest
It is so, so freezing in Wellington lately, that straight-through-your-clothes harsh chill which makes getting out of bed in the morning that much more aggrieving. I was in Christchurch and Dunedin over the weekend for work which was also an intensely cold experience, not to mention pretty exhausting (can't say I've been sleeping well recently, and sitting in clenched frustration for an hour and a half on a plastic chair in the Dunedin airport where there is nothing to do while waiting for your flight, followed by a further hour and a half's wait at the Christchurch airport will take it out of you. This is New Zealand, not the mighty plains of Canada, I don't see why we need flights with stop-overs.) Hence why it has been a while since I've blogged.

There's not much I love doing more in winter than sitting by a roaring heater with a pile of my cookbooks, going through and imagining what shenanigans I could get up to. Cooking in winter is fun - all those long-simmered warming dishes that make the house smell amazing and warm you as you stand over them - unlike the summer heat when all you really want to do for dinner is sit quietly inside the freezer and lick its icy walls. One book that I had a flick through recently was the Supercooks Supersavers Cookbook, which I picked up at the local opshop back home for about a dollar a few years back. I love its season-based chapters, its 1980 style, and its seriously enthusiastic title. 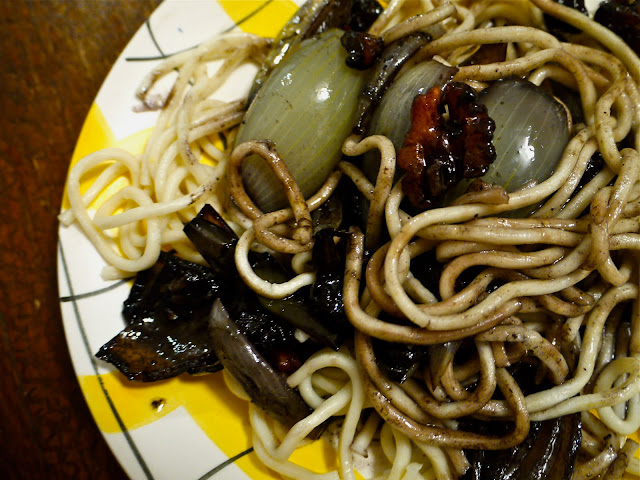 I found this awesome sounding recipe for Onions Smothered with Walnuts. It's basically onions roasted in a sticky, spicy sauce, and though they're more "vaguely scattered" than "smothered" with the walnuts it's a gorgeous combination of flavours. 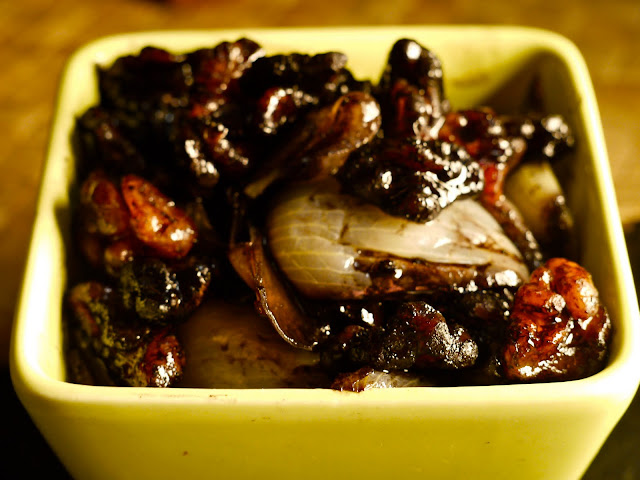 From the Supercook's Supersavers Cookbook

Heat oven to 170 C. In a bowl, mix everything together and pour into an oven-proof dish. Cover with tinfoil, and bake for around an hour, stirring once or twice. *Use olive oil and balsamic vinegar instead of the butter and worcestershire sauce to easily make this vegan. Yay! 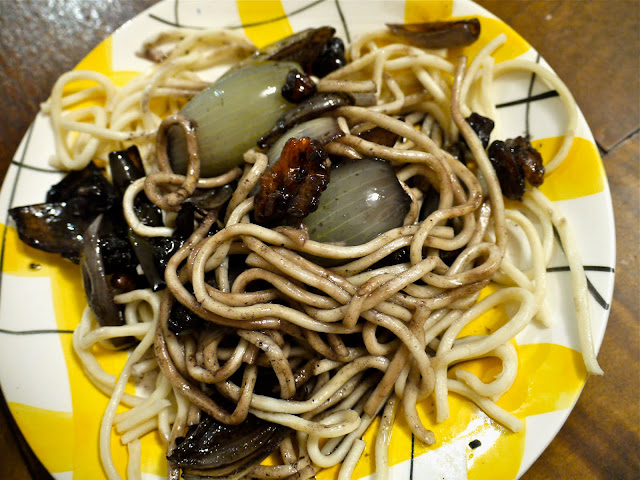 It's so good that I actually made it two nights in a row. In a weird twist of events, the first night I made it in a silicon dish and the second night I made it in a metal dish, and the second night the onions and sauce turned all black. Made me a little nervous, but not so nervous that I didn't carry on eating the lot. This recipe has a lot going for it - it has punchy, warm flavours, it's very cheap to make, it's versatile, and it just cooks away by itself, not really requiring any attention. The honey, chilli and cinnamon are a brilliant combination and it's perfect over pasta, which is how I had it, but would also work on couscous, mashed potatoes, rice, or stirred into a stew or roasted vegetables. Thanks, Supercook's Supersavers Cookbook!

As I said, I'm pretty weary from the weekend, I haven't been sleeping so well and on top of that I actually wasn't feeling that great over the weekend. There were some diverting moments - seeing Graeme Downes of The Verlaines, The Dead C's Bruce Russell and Flying Nun's Roger Shepherd weighing in on a discussion panel about NZ Music, subsequently sitting behind the Verlaines on the flight to Dunedin, meeting with former flatmate Emma for a jolly catch-up, having an enthusiastic person "help" me by picking up my phone that I'd put on the ground right by my feet so I could take down a poster at an event, only to watch them accidentally drop it down three flights of stairs...
_____________________________________________________

A Kiss at the End of the Rainbow, sung by Catherine O'Hara and Eugene Levy, from the film A Mighty Wind. This is absolutely my favourite film, and having it on my iPod made the four plane trips over the weekend much more bearable. This song is gorgeous even though it's sending up the folk music genre, and Catherine O'Hara is just...perfect. Makes me want to learn the autoharp. Sincerely.

Bloodbuzz Ohio from The National's new album High Violet. The album itself didn't set me on fire but this song is a stunner and really showcases everything that's good about The National. And you can check out a lengthier review I did of High Violet here at The Corner if you like.

Next time: I'll hopefully be a touch more awake. It's Queen's Birthday weekend in a day or two, nothing like a Monday off to make you feel unbendingly fond of the monarchy. I found this really cool recipe for pumpkin bread that I'm keen to try, I also am thinking of getting the crock pot out from its hiding place, it's now definitely cold enough out there...
Posted by hungryandfrozen