we sell our souls for bread


Nothing like a persistently rainy long weekend to really push me back into the grippy arms of the kitchen. I seriously love making bread, but haven’t had a chance in ages so tip of the hat to the Queen for her birthday creating a Monday off this week. If New Zealand ever becomes a republic there’d better be some particularly concrete replacements for any long weekend we’d lose as a result. With extra time on my hands I've been making all kinds of things including this Nigella Lawson bread recipe from her flawless book of baking, How To Be A Domestic Goddess. 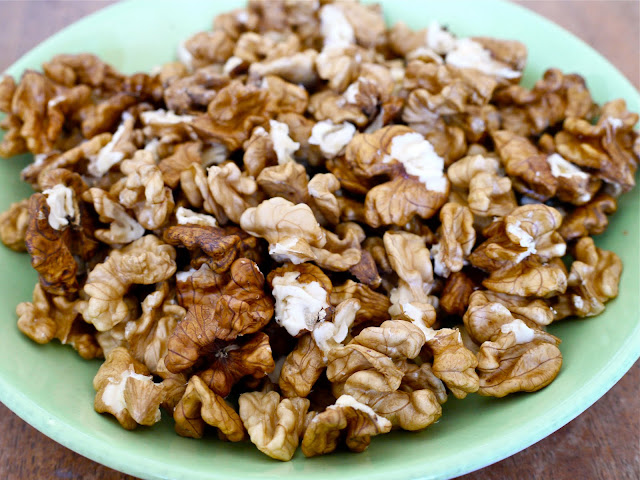 I was able to use these beautiful walnuts that Mum posted down to me from a family friend's tree. They're easy enough to get into, just a light tap from a hammer on the shell and a bit of digging quickly produces a pile of bamboo coloured, wrinkled heart shapes. They were soft and fragrant and tasted amazing - none of that tooth-coating bitterness that you sometimes get with those from a packet which have been sitting round too long.

This bread is fiddly-ish but no real mission to make. I didn’t have any of the wholemeal bread flour that Nigella specified but I did have plenty of half-empty packets of dusty offerings from the health food shop down the road (I don’t know, they’re just so compulsively purchasable) so if you’re in the same boat just do what I did and use 550g white bread flour and make up the rest of the weight with bran, rolled oats, that sort of thing. If you don't have real maple syrup, use honey or golden syrup instead. 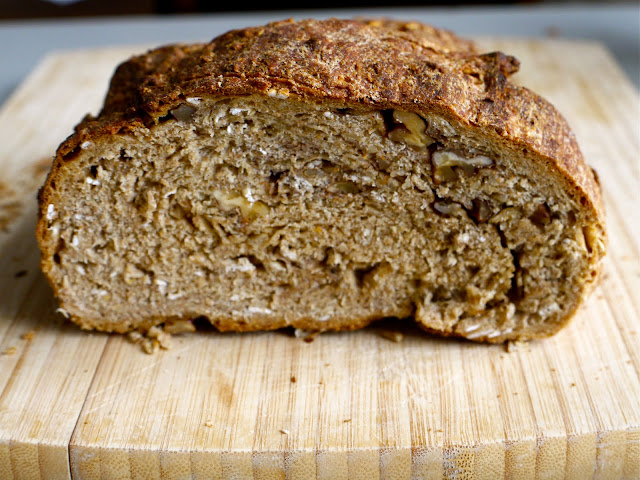 Adapted from Maple-Pecan Bread in Nigella Lawson's How To Be A Domestic Goddess (ie you can use pecans if you have them)
Mix the flours and yeast together in a large bowl. Pour in the water and syrup and mix to make a sticky dough. Knead for a couple of minutes, then let it sit for 20 minutes. Knead again, sprinkling over the walnuts as you go. It will take a little while to incorporate them, simply because this type of dough is a little tougher than usual. Keep pushing and kneading until the walnuts are more or less dispersed throughout the dough and until it forms a smooth, elastic ball. Pour over a good tablespoon of walnut or other oil, and turn so all surfaces are covered. Cover in clingfilm, and leave for a couple of hours to rise.

At this stage, punch it down to deflate it, then knead it into a loaf shape. Cover with a teatowel and leave it for half an hour, meanwhile setting the oven to 220 C. Bake for 1/4 of an hour before turning down the temperature to 180C and baking for a further 20 or so minutes, covering with a sheet of tinfoil if it starts to get too brown. 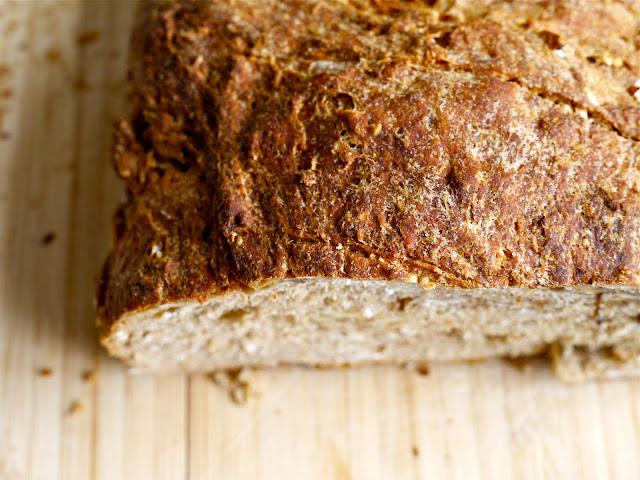 The maple syrup isn’t aggressively present in the finished, baked bread, but gives a subtle, layered fragrance and sweet, chewy crust which goes brilliantly with the deliciously toasted walnuts. Last night for dinner, inspired by a Ray McVinnie Quick Smart column in one of my Cuisine magazines, I cooked chunks of butternut pumpkin in boiling water till soft, drained and mashed them with coriander and cumin seeds, fried squares of diced streaky bacon and wafers of haloumi till sizzling, and served all that on top of slices of the freshly baked bread. The sweetness of the pumpkin was echoed in the sweetness of the bread, incredibly good with the contrastingly salty bacon and cheese. Unfortunately that’s the last of the cut-price haloumi I got from The Food Show so it’s unlikely I’ll be able to recreate such a smashing dinner for a while. If however you yourself are in the regular-haloumi-buying demographic then by all means try it.

Other things that happened this mighty fine long weekend include forsaking a long-time-coming sleepin to stagger to the pub to watch the All Whites' friendly pre-FIFA World Cup game against Slovenia on Saturday morning. Unfortunately we lost, but full marks to Slovenia considering their population is only 2.2 million or so. The upshot of it was that we had a great excuse to go to Customs and order great quantities of beautiful, beautiful filter coffee served by the lovely people there. We don't get to go very often but they even recognised that Tim had got his hair cut. As well as making me want to cook things, the rain also meant we had a fine excuse to watch The IT Crowd last night. Britain seems to positively fling out these small, side-poppingly funny yet under-the-radar comedies, and while I'd known about The IT Crowd for a while I've never pinned it down for a good watch. I really enjoyed Richard Ayoade's work withThe Mighty Boosh so it's nice to see him in a leading role in this. Find it if you can - we finished the lot in very quick succession.

Speaking of coffee, and in exciting news for future employers, Tim has left Starbucks after three years. No hard feelings towards the green siren - it helped pay our rent through university and is highly educative coffee-wise. If anyone out there requires a ridiculously great guy with an Honours degree in media studies to do cool stuff like using skills learned in both university and life, then truly look no further than the now-available Tim. You think I deal recommendations lightly? Think again.
_____________________________________________________
Title via: Electric Blues from the Broadway musical Hair. My preoccupation with its amazing score rides again. This song is so exciting and dynamic, and I presume they use the word 'bread' to mean 'money' in this context, but then...maybe they'd tried this recipe too. And while lyrics like "we're all encased in sonic armour, belting out through chrome grenades" make me smile, the next stanza's "they chain ya and they brainwash ya, when you least expect it, they feed ya mass media" could definitely find relevance at any stage.
_____________________________________________________

Music lately:
Beth, by localers Voom from their debut album Now I Am Me. I first heard this song years ago on Channel Z and while I can't say I cried or anything, I certainly felt that good, self-indulgent kind of desolation that you get from wallowing in excellent sad music about situations that you're not sure if you can relate to but you allow them to reflect whatever it is you're feeling anyway. Some bright spark put the video onto Youtube so I can now enjoy and wallow all over again as and when necessary.
Janelle Monae's Tightrope from The Archandroid. There's already so much being said about her on - dun dun - the internet, but at face value it's a stonkeringly good tune.
___________________________________________________
Next time: Maybe even more exciting than baking bread and watching DVDs on a Friday night, I made my own ricotta cheese yesterday! The recipe is so easy I could almost put it right here as an afterthought. But no. You'll have to wait for next time, well either that or call my bluff and google "homemade ricotta" and render me completely unnecessary.
Posted by hungryandfrozen