"To Days Of Inspiration..."

In one week Tim and I will, bar a couple of exams a-looming, have finished our penultimate semester at university. Scary stuff. Almost as scary as watching how much oil felafels absorb. Good grief. There I was thinking they were practically health food. 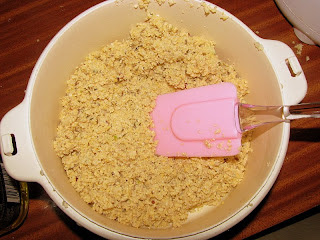 Above: I mean, what with the chickpeas and all. I even threw in a handful of organic sprouts (freebie from the Wellington Food Show!) I loosely followed a recipe from gorgeous blog The Puku, but had a bit of trouble making the chickpeas (whizzed into crumbs by the food processor) to form a manageable "paste" - refrigerating your felafel before frying helps though.
. 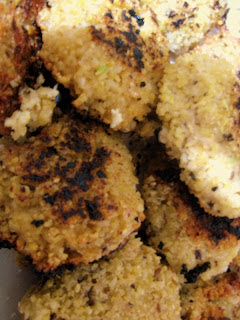 Above: Kindly ignore the carcinogenic bits. I'm truly terrible at shallow and deep frying, and it seemed that the small cakes blackened as soon as they hit the pan, sponging up an awful lot of oil without really cooking. They tasted fabulous despite all this, and don't take that long to warm through. Delightfully crunchy and nutty, warmly fragrant with cumin seeds...it's worth having the kitchen (inevitably) reek of oil and the house filled with smoke. And there's something about felafel that always reminds me of The Adventures of Hercules (used to be on Friday nights, before Xena), it used to be family viewing in my house and I'm sure there was some kind of humourous interlude regarding felafel. I realise I'm rambling here...
Speaking of those sprouts, I've had ZERO response from the people I handed out my business card to at the food show on Sunday. Still, nothing ventured...
. 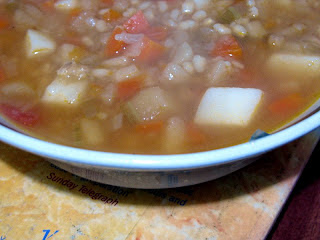 Above: This soup was intensely annoying to photograph. I'd point the lens towards the bowl, the lens would steam up...repeatedly. So; sorry that it's not a great photo. The unfortunate thing about photographing one's dinner prior to consumption is that I'm usually very hungry and impatient.
Despite all my complainings about what a horrible time of year it is academically, it is a marvelous time to be in Wellington. One reason. The Wellington Library Book Sale. Ohhhhhh it's awesome. The library itself is amazing enough (They have the Wicked soundtrack and Cat Power and the John Peel compilations, and that's just their CD section) but their sale is, as Marjorie Dawes might say, "summin else!" I haven't had time this year for an extensive perusal but have managed to get my sticky paws on a couple of back issues of Cuisine, Gourmet Traveller, and Taste, and a most brilliant discovery - Claudia Roden's Food of Italy book. It's not a new book by any means (my copy was reprinted in 1999) and it's as fat as a chick-lit novel with no pictures. But I read the whole thing in two nights, and long to make everything from it. Nigella (of course) is the reason that Claudia Roden caught my eye in the first place, and I heartily suggest you look her up. Anyway, minestrone is one of the recipes in the book, and is what inspired last night's dinner.
Which ended up not resembling minestrone at all. But hey. It started off that way, with onion, carrots, celery and potato sweating it out in a pot. I added parsnips, which gave it an incredibly delicious sweetness, and a porcini stock cube from a parcel Mum sent me a while ago. A spoonful of tomato paste, and a handful or two of barley...and that was it. Very simple, but very, very good. I love being inspired in the kitchen. 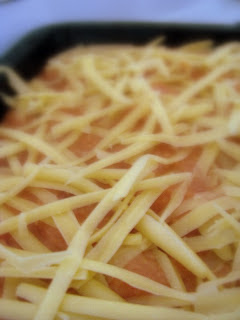 Above: To go with, because I was so fired up with Italian-nicity by Roden's book, I decided to tinker with her baked polenta recipe to create something...not exactly original, (though I've certainly never seen it done before) but magically delicious at least. And face it, which is more important here?
I'm not quite sure if this recipe technically worked as such so I'm a little reluctant to hand out the recipe. It's kind of like eating a liquidised margherita pizza. And if you're wondering, the answer is yes. That is indeed my breakfast smoothie of choice. 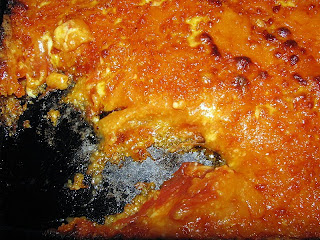 Above: Tim and I ate ALL of this, even though it probably could serve four. And, uh, we could have ate more, had there been some to hand.
Baked Tomato Polenta
150g polenta
600mls water
400g can chopped tomatoes
Cheese and butter at your own discretion...
I'm not sure that it matters whether or not you use the coarse, gritty polenta or the finer, flourier stuff. I used a mix of both because I had a tail-end bag of each. Oh and if you can't find it at the shop, try looking for "cornmeal" (same diff...)
Put the polenta and water in a good sized pot, and stir vigorously to break down any lumps. Bring to the boil slowly, stirring in one direction only. This is very important. I couldn't even begin to imagine why. Now it's worth pointing out here that when I made this last night, it didn't really boil but thickened hugely, with the occasional slow-moving bubble breaking the surface. I can only presume I was doing the right thing as the end result tasted fab. As it gets very thick keep stirring, keep this up for a couple of minutes over a low heat. Add butter if you like (and I do!) and a handful of grated cheese too. Remove from heat, stir in the can of tomatoes, which will turn it a glorious orange colour. Spread this mixture into a small roasting dish - the sort you might bake brownies or slice in - sprinkle over grated cheese and cover with foil. Now, bake it for about 45 minutes, removing the foil and grilling it at the end if you like. Now, this won't quite be sliceable - unless yours turns out as Roden intended - but there is nothing wrong with a sludgy scoop of it in a bowl. It is ridiculously good; it belongs in the upper echelons of "ultimate comfort food."
Tim got up at 5am today to go to a pub with Paul to watch Man U (about whom Paul is fanatical) play Chealsea. For everyone's sakes, I'm so glad they won. I prefer a more leisurely start to my Thursday, (first sleep-in of the week!) so I rose at 8am, and, thinking I had the flat to myself, began singing VERY LOUDLY and expressively along to Rent. It was with a red face that I greeted Emma as she came out of her room some time later. My singing voice could charitably be described as "thin, but lustily enthusiastic"... I decided to do a repeat performance of Nigella's muesli muffins that I first made earlier this year (click *here* for the link to the recipe, which I can't be bothered posting twice) and loved. With their oaty interior and potential for fiddling with (and fiddle I did) they seemed like the ideal thing to make this morning for when Tim returned home, bleary eyed. 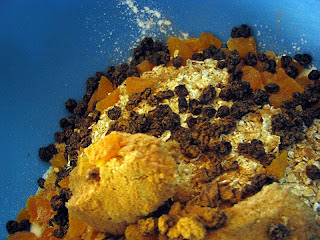 Above: As with last time, I didn't have any actual muesli to hand, so improvised with rolled oats, linseeds, currants, and chopped, dried apricots. Instead of buttermilk I used half milk and half Greek yoghurt (that I had incubated a few days previously). I reduced the sugar and squirted in a rippling spoonful of golden syrup, just for kicks. 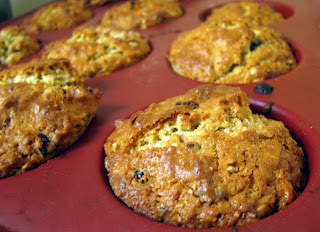 Above: I love this recipe. Tim and I had one each and I put the rest in a Tupperware container, to try and shove into our crowded freezer. I've taken to making a batch of muffins and freezing them, either for Tim when he gets low blood sugar, or just for a snack to stop myself buying forty-five chocolate bars from the 4-Square down the road in a moment of desperation. Surprisingly useful on both counts.
This time tomorrow I will be in Palmerston North, for Rent, before zooming back to Wellington again on Saturday morning. I'm pretty excited although it has come around so fast that I haven't had much time to think about it (which is probably a good thing, as it squashes such deep-seated issues as Their Collins is white! and Will people moo? and such and such) I have my final photography assignment due on Tuesday, and it's going to mean a lot of time spent, mole-like and dry-eyedly blinking behind the computers at uni. I can't even be sarcastic about how "fun" that's going to be.
It's probably worth mentioning that we have something resembling a flat cat (emphatically not a pet, as they are forbidden on the lease, and anyhow I'm 99% positive that a cat this sleek must belong to someone.) It is a gorgeous little tabby - the sort that hasn't quite grown out of "large kitten" stature and never will - and he comes and visits us regularly. We have dubbed him Oscar (as in Wilde - well, we are a flat of BA students) and he is really flipping adorable. I'm sure many of you won't need me to prompt you, (and I apologise if this errs too far on the side of geeky for some of you) but if you feel like a dose of kitteh hilarity then you really should visit I Can Has Cheezburger? Lolcats galore!
Posted by hungryandfrozen 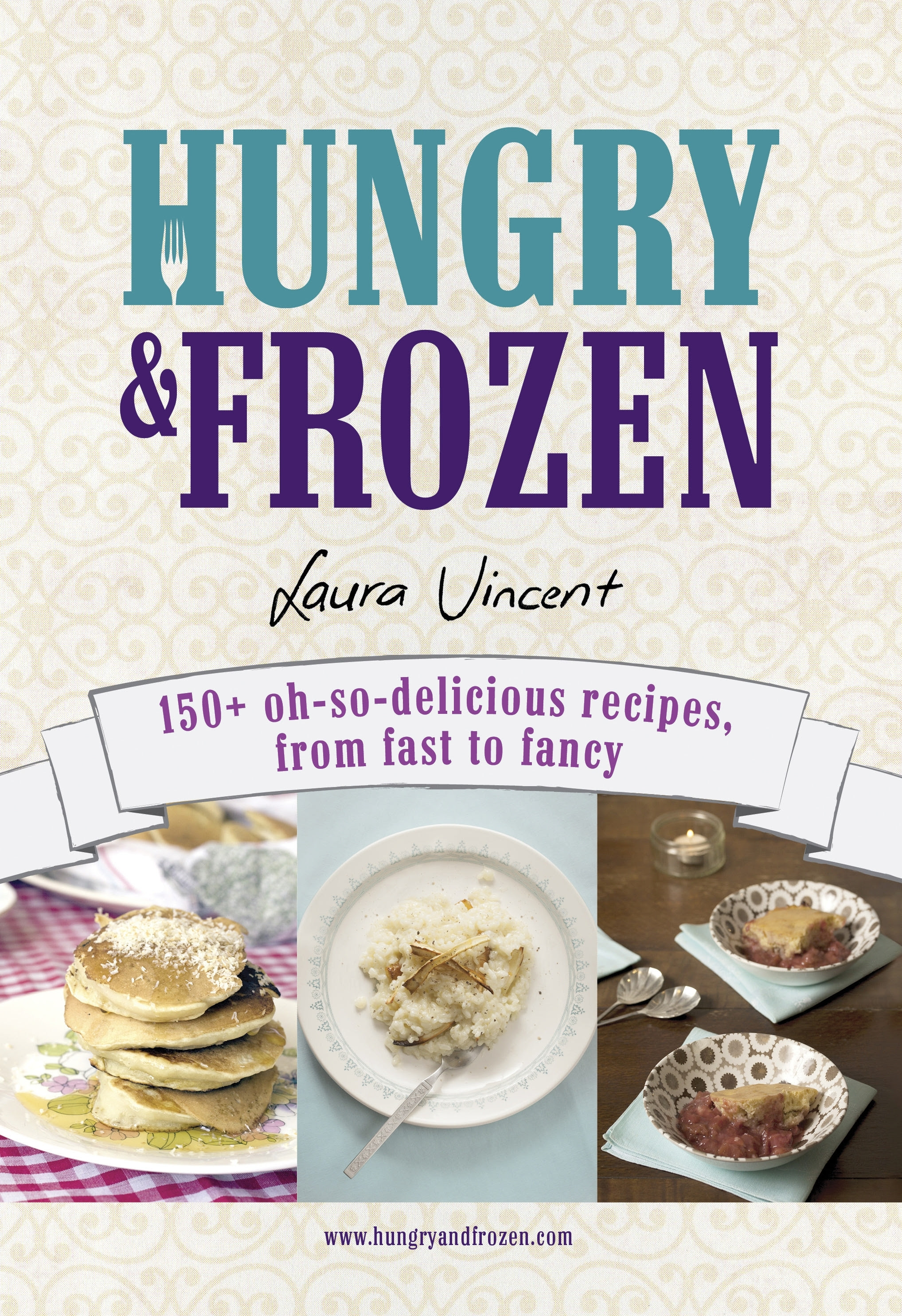