(Yes, that is The Smiths I'm quoting in the title. ) Finally! A new post. It has been a long time coming. Uni is keeping me good and stressed, and I have a presentation and a 2500 word essay to pull out of the air this week... 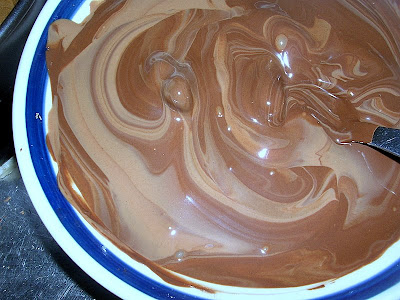 Above: Bla, bla, chocolate shmocolate. Yes, I made another chocolate cake, this time the Chocolate Meringue Truffle Cake from Nigella's marvelous Feast for Emma's 22nd birthday; the cake was amazing, the photos weren't, but I rather liked this swirly shot.


I'm sick of seeing sweet things on this blog, and I'm sure you must be too, but bear with me - I'd hate to lose a reader for want of a sausage. (heh!) Because I'm temporarily relying on our old digital camera which is really...not very good (I know, artist - tools - do not blame) and our actual camera is still unavoidably detained, the only way I can take blog-worthy photos is if there is natural light. Considering our flat gets about 14 minutes of natural light per day in winter, and that it has been raining non-stop for the last month or two...well. It doesn't make for snap-happiness. Plus, it's always dark by the time I start cooking dinner. During the day is when I bake. So that's what you get to see. It's a pity, because if I say so myself, I've been making some pretty nifty dinners lately - pumpkin and black bean curry, corn chowder, bobotie, raw salad with hot and sour dressing and sesame noodles, mushroom risotto...but for you: more sweet things. 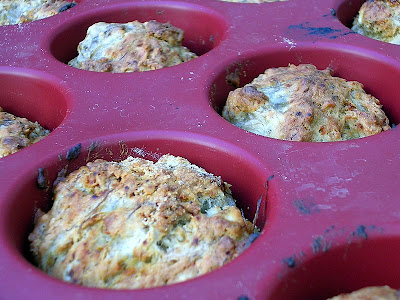 There were some blackened, rock-hard bananas that had been in the freezer forever. Because our freezer space is limited at best, and because they were just sitting there balefully, annoying me, I decided to turn said bananas into some muffins. Sounds dull, sounds obvious, but once you bite into one - fresh from the oven, with the warm tickle of cinnamon present in your throat and the flavour of honey flooding your tastebuds - it makes me wonder why I don't encase this fruit in lumps of quickly-stirred batter more often. They're squishy, they're sweet, they take five minutes to make, and they freeze well. This particular recipe of Nigella's is quite apt for the current economic downturn - minimal butter and sugar, no eggs...


Banana Muffins (from Nigella's equally warm and cinnamon scented How To Be A Domestic Goddess, my love for this book is intense!)

Heat oven to 190 C. Mash the bananas, add the butter, honey and cinnamon. Carefully fold in the dry ingredients. If it looks tooooo dry add a couple of tablespoons of milk. The main point is not to overmix them. Spoon evenly into a 12-bun muffin tin lined with paper cases (or use a nifty silicone one like I did) and bake for 20-25 minutes. Leave in the tin for five minutes before removing. Eat. 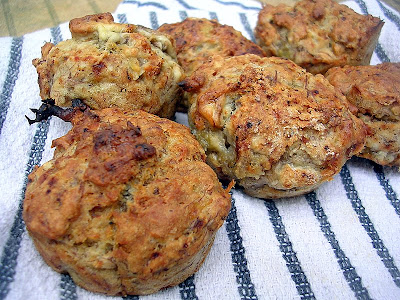 Because it seemed as though on this particular day we were going to get more than our 14 minutes of natural light, I decided to really go nuts (yes, this is my version of living it up) and make cupcakes. Wait, it gets better - Pina Colada Cupcakes. 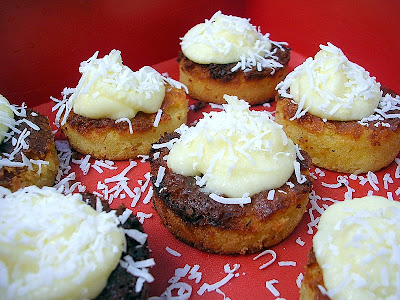 Nigella's cupcake recipe has served me well. In each of her 6 cookbooks (all of which I own - ker-ching!) she includes one or other form of cupcake, and between the simplicity of the recipe itself and the amount of times I've reproduced it I hardly ever actually consult the text. Not everyone is as vigilant as I though. This variation on Nigella's ur-recipe runs thusly - take 125g each of butter and sugar, cream thoroughly, add either a drained can of crushed pineapple in juice or about 200g chopped real pineapple, then two eggs, 125g flour, 2 t baking powder...a teaspoon of Malibu if you like, and a splash of milk if the batter needs it...divide between 12 cupcake cases, bake at 180 for 15 minutes. I iced with a slapdash buttercream (you know, butter, icing sugar, bit of water) to which I added a pinprick of Boyajian orange oil...finally I strewed some coconut over the fragrant cupcakes to complete the Pina Colada effect.


Even though I didn't soften the butter enough and so it sort of affected the baking process, the finished cakelets tasted fabulous. There's something about coconut and pineapple, they're such a classic combination. Which is why I've appropriated it here and then tried to take all the credit for something really quite unimaginative...

I realise it's bordering on churlish to complain about my rapidly diminishing time and then talk about a film that I watched, but I couldn't spend the whole weekend doing schoolwork. Anyway, Enchanted - you know, that self-reflexive Disney film - has come out on DVD and I rented it from the video hut down the road. I ended up watching it alone because Tim's a hater, but it was actually really very good. I laughed out loud more than I expected. And it has Idina Menzel in it! She doesn't even sing, she just acts, which is pretty cool. It's a small but relatively pivotal role, and they could have gotten, oh I don't know, Demi Moore or Rachel Griffiths or...I don't know, even Hillary Swank to play the role, it's not like they didn't have the budget for it. Anyway, Idina is very cool in the role, she looks gorgeous and it's nice that she didn't get the "bad stepmother" story arc. James Marsden, as the uber-prince Edward, is hilarious. He manages to wring every drop of physical humour out of his role, and I love how he exaggerates the trad Disney prince. Susan Sarandon, for someone so awesome, is surprisingly...meh...Patrick Dempsey does a decent straight man, and Amy Adams is really likeable. I'd seen pictures of her and she didn't look like she had a lot of spark, but she lights up on screen. Timothy Spall is as nifty as ever.

Speaking of movies, okay, so I often catch the cable car into Lambton Quay for work. On the swipe-card turnstiles there are these signs saying "No Entry for Small Children." Every time I see those signs, I think to myself, "Gee, I should buy No Country for Old Men for Tim. It's violent, Oscar winning and Coen-penned - he'll love it!" And then I think happily about Javier Bardem for a spell. And then I soberly nay-say myself, refusing to be jettisoned into capitalism by a suggestive sign. Don't fall into their trap, I think with caution. This can go back and forth. And it happens every time I go to work. I've tried to catch myself in the act, but those signs get me every time. You know what I'm talking about, right? (*small voice* just me?)