Email ThisBlogThis!Share to TwitterShare to FacebookShare to Pinterest
I was highly excited anticipating the one-year-anniversary of my blog. I invisaged all manner of things - maybe some kicky new features, or a photo essay dedicated to the cat, or some kind of conceptual baking, or maybe a video, something new and fun to try and make our relationship last beyond the honeymoon, "hey this blog is mildly diverting" stage and into full-on commitment. But then I had to hand in a 3000 word essay, and if that were not enough we exceeded our 20gb internet limitation...by a lot. We lack the technology to make a cooking video happen and I was not feeling telegenic in the slightest. So, a few days late, I apologetically offer you this post, like a bunch of wilted flowers and slightly melted chocolates purchased at the last minute from a petrol station.

But really - it is exciting to me that this blog has existed for a whole year. I remember having the epiphany to make one, I don't remember when, it was just an idea that made so much sense to me. I'd read blogs and thought "I'd like to do that," and I read other blogs and thought, hubristically, "well I can definitely do better than that." Little did I realise that my badly lit photos taken on auto were not going to cut it with fickle blog readers. I rather naively assumed that my terrible photography would be seen as charming and positively daring, but actually it was just...terrible. And as I learned new skills (helloooo macro function) I gained more readers. But I'd like to think it's the content and recipes as well as the photography that makes people stick around, especially because my photos still have a long way to go. Indeed if you have a little time on your hands and you're up for a laugh, why not peruse my very early archives? I truly thought that all I had to do was put my opinion out there and the adulation would pour in. I love my blog wholeheartedly and with complete bias though, it has been a haven, a diary, a self-indulgent soapbox, a recipe file, and a record of my life for the past, swift-moving year. I look forward to seeing how long it lasts. 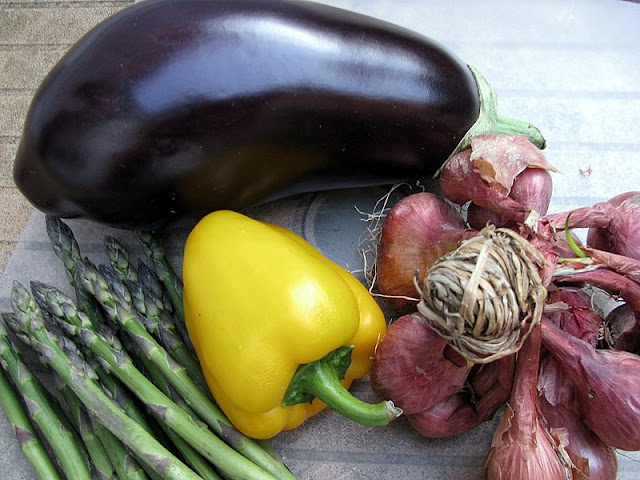 I went to the vegetable market on Sunday and gamely trudged back up the hill with my spoils, (sweating like a donkey all the while, as is the nature of Wellington hills) but it wasn't till I got my breath back and stopped perspiring that I realised how utterly gorgeous the vegetables were. They made me want to don a voluminous cape and floppy beret and paint them in a still life. Fellow food-bloggers, tell me I'm not the only one who thinks food is really preeettyyy. 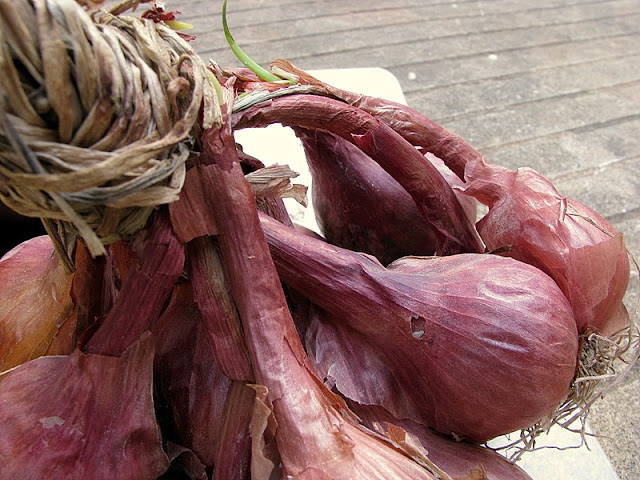 I mean these would not look out of place in some medieval, suckling pig feast. I've honestly never purchased shallots before (don't faint, but I've always used onions instead when a recipe asked for it, well I am a student) which is probably why I'm so embarrassingly enthusiastic, but they were cheap and rather beautiful so I grabbed a bunch. 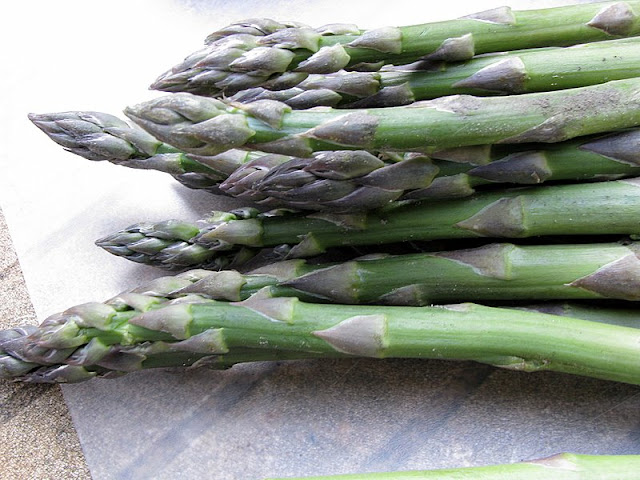 Oh asparagus how I love you. Especially when it's two fat, healthy bunches for $3, that can last for four separate dinners. I used the shallots and asparagus in an intriguingly delicious recipe from Simon Rimmer's excellent, inspiring cookbook The Accidental Vegetarian. It was so monumentally good that I considered making the whole thing again the next night, or perhaps eating the whole lot on my own and pretending it never existed. I've altered the recipe a bit as Rimmer's version was more coconut-happy than I go in for. It's a little fiddly but not difficult, and makes the kitchen smell completely fabulous.

Melt the butter in a pan, add the sugar and when it starts to dissolve throw in the shallots, peeled but left whole. Turn down the heat and cook slowly for at least 20 minutes, (he recommends 45 but they were more than fine with less). Blanch the asparagus and refresh in cold water. I sliced them into two-inch lengths.

1 onion, roughly chopped
2 garlic cloves
1 inch piece of fresh ginger, peeled
3 red chillies, or however much you desire
1 tsp ground coriander
1 T tamarind paste (or substitute lemon juice)
1 t tumeric
1 t curry powder
1 stalk of lemon grass (which I left out because I didn't have any)
pinch of salt

Whizz the lot together in a food processor, or chop and mix everything well like I did using my mezzaluna. This results in a chunkier but no less flavoursome paste. Heat a little oil in a pan and gently fry the paste, carefully, and stir in the coconut milk, letting it bubble away and thicken slightly. Add the now magically caramelly shallots and the blanched asparagus, letting it simmer for about ten minutes. Finish by stirring through the toasted coconut and chopped coriander. If you like, add a handful of frozen peas to beef it up (as it were) quite easily. This should serve four-six. 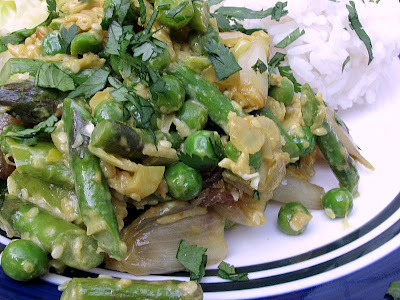 The combination of flavours were so perfect - zingy, spicy, earthy, fresh, sweet. I truly could have eaten this whole thing surruptitiously by myself. And shallots - oh my! Rich, mild, gently oniony, what have I been missing out on all this time!

My blog's one year of existence coincided rather bittersweetly with the closing of [title of show], one of the most exciting new shows on Broadway...I, of course, make this statement without having seen it at all, such is the nature of being a theatre fan from New Zealand. Rice Krispie treats are referred to in one of the songs, and I've had a distinct hankering for them ever since hearing it for the first time. Nigella has a version made with melted marshmallows which indeed sounds delightful, but I opted for an old Edmonds recipe for what we in New Zealand call Rice Bubble Cake, using honey and butter to bind the cereal together in sugary squares. 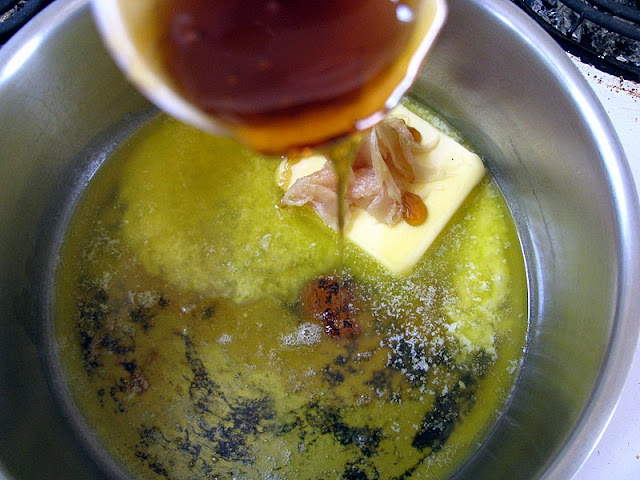 125g butter (incidentally, one year ago a block of butter was $2.70 from the corner shop, now it's $5)
1/2 cup sugar
1 tablespoon each of honey and golden syrup

Melt the butter and sugars together till gently bubbly. Once it has bubbled away for a little while, remove from the heat and carefully stir in 4-5 cups rice bubbles. Spread this into a waiting square tin, and allow to cool. The butter-sugar mix will be very hot, so don't go sticking your face into it or anything. 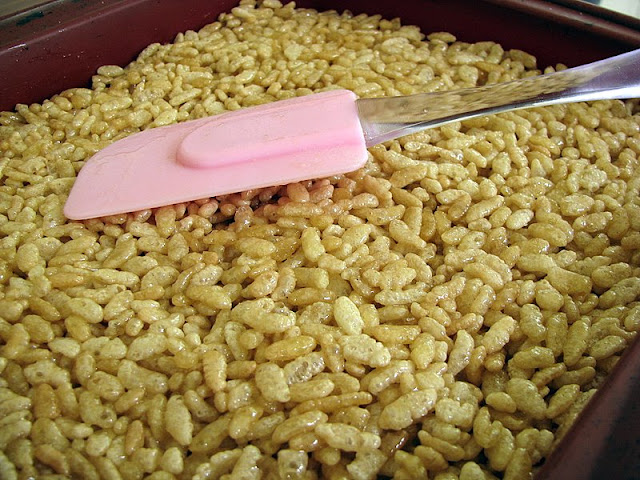 Rice bubble cake makes me reminisce twofold; I remember making this with mum as a child, wanting to eat the buttery sugary mixture so bad and not thinking it would be enough to cover all those rice bubbles. It also reminds me of my gap year in a boarding school in England, where the kitchen would serve up cakes of some sort for afternoon tea with soothing regularity. One of the mainstays of afternoon tea was rice bubble cake, sometimes it was sublime and sometimes it was crumbly and oily and weird. We never knew what happened behind the scenes to make it so, and frankly I don't want to know. But for those of you who've never tried this before, I know it looks a little odd, but just try and stop at one piece. Or three. Crunchy, texturally delightful, caramelly, buttery - it's great stuff. 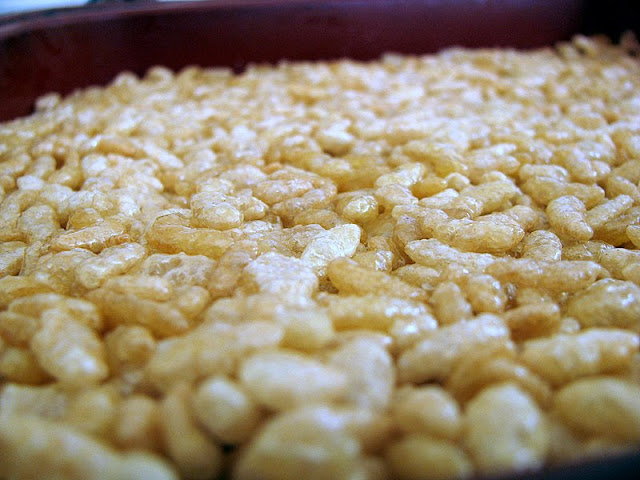 Overheard in our kitchen: (in the throes of discussing what we'd do if we won the $30 million lotto this weekend)

Well, I do have plenty of hilarious food-related anecdotes (particularly involving grapefruit and Jersey Caramels as friends and family will know from the many times they have been told). But that's the thing about imagining what you'd do if you won the lottery, especially if you have a particularly vivid imagination like me - your mind bounces from concept to concept and then you get overexcited and your heart starts to thump wildly with the very fullness of your own potential excellence and then you remember that you haven't won $30 million at all.

As I said earlier in this post, I handed in a 3000 word essay - well it was my final essay for uni. I have an exam on the 4th but my lectures, assignments, etc, are over for good. Luckily I've finished on a relative high, getting A's on two essays (on the social influence of Idina Menzel and the subordination of female Beat poets respectively) and loving all my papers. I started this blog while still in the middle of uni, now that I've come to the end of that time it's a little sad, but also exciting to think what might be in store for me next. Hopefully you, the reader will stick around with me - I'd flatter myself that this is kind of a fun read - and not just come here if Tastespotting tells you to.

In the words of Rent: "How do you measure a year in the life...how about love?"

In the words of the always inspiring Nigella Lawson: "I have made the most of being a food obsessive. For good or bad, it's my life, it's me and I don't see anything changing."

And appropriately, in the words of [title of show]: "I'd rather be nine peoples' favourite thing than a hundred peoples' ninth favourite thing."
.
So true. Quality over quantity any day. And ah, maybe next year I'll do something more exciting to mark the occasion.
Posted by hungryandfrozen