last of the summer whine

I can't buy cherries. They don't exist. They are neither on the shelf at the corner shop or on the stands at the vege market. Their season has passed. And it's probably just as well, because had my addiction to them been allowed to continue, my future children would never enjoy things like shoes, or a university savings fund. All financially debilitating fruit-eating habits aside, it was my lack of cherries that really made it clear that summer is fast melting into autumn, like an icecream inadvertantly dropped on a hot, concrete footpath. The mornings are darker, the evenings cooler, the cardigans emerging from the bottom drawer. Waah!


Having thrown all that bleak imagery at you, I should point out that this weekend has been absolutely gloriously sunny. Yesterday Tim and I, along with my godsister Hannah who has started university down here, took advantage of said weather and bussed out to Lyall Bay to the Maranui Surf Cafe. They hardly needs my endorsement - it was absolutely packed and there was a constant stream of people through the door. We had to wait for a table, which made me feel a little nervous - after all, it was my idea to shlep all the way out there in the first place - but it really wasn't that long before we were seated. Somehow, even with my chronic uselessness riding against us, we ended up with the best table in the house - in the centre of a huge picture window, gazing out over the sea.


There's a reason why it's always packed - the food was fantastic. I had the big vegetarian breakfast and Tim had the regular big breakfast (I gave him some of my avocado and he gave me some of his kransky), and I kid you not, it was the best of its type that I've had in Wellington. Every cafe under the sun has some form of "Big Breakfast" and they can be anything from boring to meanly portioned and soggy. But this was incredible - generous amounts of avocado and pesto, large, glossy mushrooms, softly poached eggs, wonderful grainy bread and tomatoes that were so delicious I could have eaten a kilo of them on their own. I mean, I'm actually considering ringing and asking where they got them from. I wish I'd thought to bring my camera. Personable service and not-entirely-terrifying prices means I'll definitely be back but with my 9-5 job the weekend is my only option, so maybe try to go on a weekday if you can when it's likely to be more chilled out.


One more thing - the big breakfasts are really, really filling. I mean, I'm quite the horse when it comes to appetite size but was forced to concede bitterly that I didn't have any space for one of the many enticing cakes on the counter. In fact, several hours later Tim and I still didn't really feel like much for dinner. Unusual. So while Tim did his readings for Honours, I flung together something fairly light that wouldn't be burdensome on our constitutions. 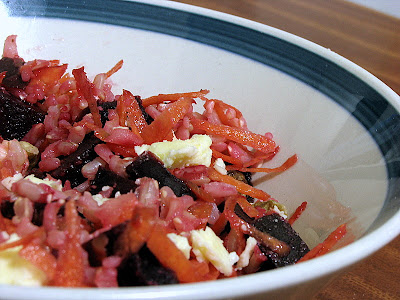 While brown rice was on the boil, and a foil-wrapped beetroot was roasting away in the oven, I assembled feta cheese, capers, sliced preserved lemon (made by my godmother), walnuts, and grated carrot. The beetroot was chopped into chunks and along with everything else, spatula-d into the drained rice and piled into two bowls. Delicious, and the sort of thing you can basically eat a vat of without feelings of self-loathing and regret arising after. While the making and eating of dinner was going on, we listened to a greatest hits CD of Joe Cocker. I'd just like to point out that on the whole I hate greatest hits compilations, and I wasn't entirely committed to listening to J-Cock all evening, but as it turns out I'd somehow forgotten how much I love the old so-and-so. Every song was pure gold. The man's a genius! Who else on earth can cover the Beatles so lavishly and not only get away with it, but sound brilliant? I also like how the album ended with killer song She Came In Through The Bathroom Window, and not, like many other artists' greatest hits albums, with an ill-advised late nineties hip-hop disco remix collaboration track.


I found this recipe on Scrumptious blog for Eggplant and Tomato Curry. It's easy to make and tastes fantastic - I can see it becoming a regular fixture so long as the ingredients stay cheapish at the market. 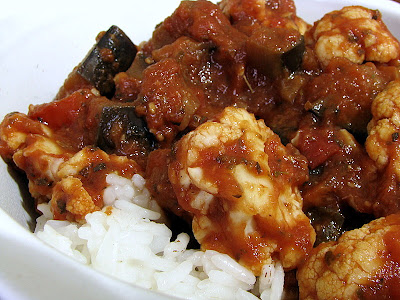 Above: I added cauliflower because I had some kicking round and thought it might bring a bit more substance. I guess if you wanted you could add some coconut milk or use different vegetables, even adding meat of some kind - it's quite a nice starting point recipe for tinkering round with. Speaking of tinkering round, I received a bottle of passionfruit vinaigrette for Christmas from my brother and apart from drinking the stuff straight from the bottle because it's so delicious, I've been trying it in all sorts of things, including as a marinade for chicken breasts. If you don't actually have the Wild Appetite vinagrette like I do, I'd use a mix of pineapple juice, olive oil, a pinch of tumeric and a splash of cider vinegar. I cooked the chicken on our George Foreman Grill, which caramelised the sugar in the marinade, imparting a smoky deliciousness. 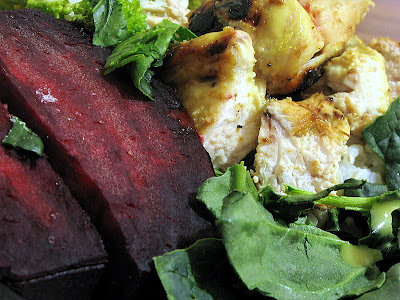 I sliced the chicken into chunks and served it with roasted beetroot, spinach, and brown rice. I'm not sure what I was really going for but it seemed to work, and I can highly recommend the vinaigrette-as-marinade route...I'm sure Paul Newman's dressing would be incredible!

Overheard in our kitchen:


Next time: I get old-school with Girl Guide biscuits, and bake a cake with only four ingredients, none of which are butter or eggs. Yeah, I'm suspicious too, and I haven't actually tasted it yet so if it has all the flavour of a well-boiled sponge I'll probably just conveniently forget that I said I'd blog about it...if it turns out well then you'll just have to wait for the next post to see what these four mysterious ingredients are!
Posted by hungryandfrozen