Do you ever get to that stage in a recipe, when perhaps the walls of your kitchen are schmeered with sugary paste and there's butter in your hair and a light dusting of flour coats all surfaces and you kind of think to yourself "Why did I attempt something this ambitious?" You've decided to make a braised dish involving seven wine-based reductions that weren't immediately apparent the first time you scanned the recipe, or maybe it occured to you that a poached meringue topped with toffee sculptures would be the perfect follow up to a meal, when suddenly it's 10.30pm and you've used every pan in the house and have internal bruising from trying to whisk egg whites to stiff peaks.


Maybe I paint a slightly dramatic picture, but the pie I made on Wednesday night more or less fell into this category. Luckily, this high-maintenance girlfriend of a recipe was worth it eventually because it tasted incredibly good, despite my ham-fisted tendencies threatening to ruin it at every step of the way... 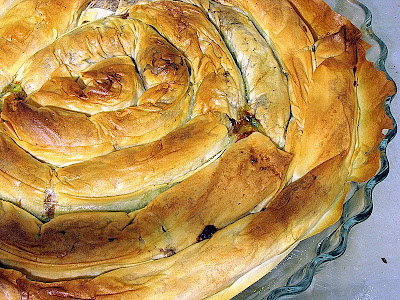 Based on a recipe I found in Cuisine magazine (and you can find the original recipe here) the idea is to roll a mixture of grated eggplant, crumbled feta, eggs, mint and dill up into sausages with buttered filo pastry then coil them round in a pie plate, to create a pie with a difference. I'll be the first to admit that my own wobbly, bulging pie didn't quite match the neat-edged vortex of filo of the picture in Cuisine. This could be due to filo pastry being incredibly fiddly - I seemed to tear it every time I set my pastry brush down. Also, I replaced the eggplant with grated zucchini but didn't bother to let them drain in a colander and - getting what was coming to me - the mixture was quite liquid and difficult to wrangle.
.

I very nearly considered biffing it all and ordering in a curry, especially when the filled rolls of filo kept breaking as I laid them in the pie dish. I also didn't factor in how long it would actually take to bake (my advice to you all: factor in the time something will actually take to bake) so we had a relatively late dinner by the time it was done. Finally, it was a nightmare to slice up neatly. But luckily it tasted amazing, and how could it not, with all the good things in life like butter and pastry and feta appearing in such proportions. Would I try it again? Yes, and next time I'd be more careful in reading the instructions. And maybe renovate my kitchen so I have enough benchspace to deal with all the filo pastry. At present our benchspace falls into the "laughable to non-existant" end of the scale.

I took a slice to work the next day for lunch and waited hopefully for people to say "my stars that looks like a complicated, deliciously gourmet pie...what - you made it? What an asset you are to this company" But no-one did. Tasted good second time round though.


I had a day off in lieu from work on Friday. Tim and I went back to the Maranui Cafe thinking that at 2pm on a weekday it might be quiet. We thought wrong. It was packed, we had the choice of only two tables, and there was a steady stream of customers entering. I must say, my nerves were feeling a little jangled by the time we got there. You see - and I should perhaps warn you about the x-rated content here - on our way to the bus stop, I noticed a cicada resting casually - leisurely even - on my chest. I sort of froze up and flapped my arms ineffectually at Tim, who gallantly came to my rescue and flicked it away. Somehow it went down my top and decided to it quite apparent that my cleavage was not where it wanted to make a permanent home. At this stage I had no other option but to more or less remove my top. I'm quite thankful that ours is a quiet road. Because of this hair-raising incident we missed our bus - luckily they are fairly frequent - and between that, and the fact that the bus we did catch managed to break down twice on the way, I had a dark feeling that the whole thing just wasn't meant to be.

But it was. We finally arrived in Lyall Bay, climbed the stairs up to the cafe, and were seated immediately near (but not right in front of) the picture window. I ordered the vegetarian big breakfast and the very act of doing so made me feel a little more calm. By the time it was ferried to me by the charming, friendly waiter, I'd graciously made my peace with the world (but not that wretched cicada.) 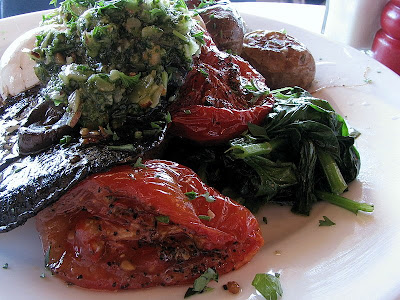 Above: The vegetarian big breakfast, called the "Victory Breakfast" on the menu. It's dangerously good. I'd walk barefoot to Lyall Bay to taste those tomatoes again. Notice the generous dollop of pesto, and the size of the dark, glossy 'shrooms. The 5-grain bread (from Pandoro) was so delicious I nearly fainted with every bite. 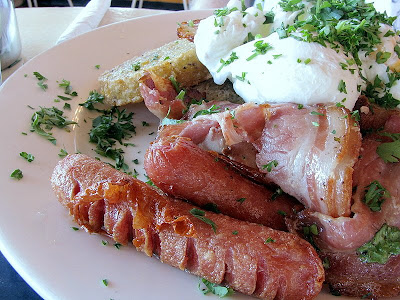 Above: As you can probably surmise from the vast quantities of meat, Tim ordered the non-vegetarian "Big Bay Breakfast". He said the bacon was delicious and I can vouch for the quality of the kransky, as I audaciously stole a piece. The waiter who brought us our dish said there had been some kind of stuff-up out back with the poached eggs and said we were more than welcome to order fresh ones, but neither Tim nor I - fairly discerning when it comes to our eggs - had a problem with them.

Obviously this alone just won't do. We were going to buy cake to share afterwards but we were both so visibly unenthusiastic about how it would reduce the actual cake-per-person ratio that we quickly decided to do the logical thing, which was to get two cakes to share. 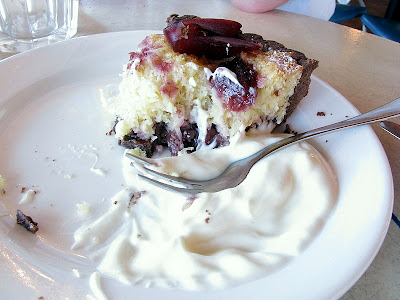 Above: A plum and coconut tart with a chocolate pastry base and yoghurt. It was lovely - the coconut gave the tart a delightfully dense, moist texture which contrasted with the smooth, ascerbic slices of plum dotted throughout. The pastry gave a further contrast in flavours without being too sweet. The yoghurt was nice as an accompaniment but we mostly chose it because it was offered for free and we like to squeeze out every last drop of value-juice. 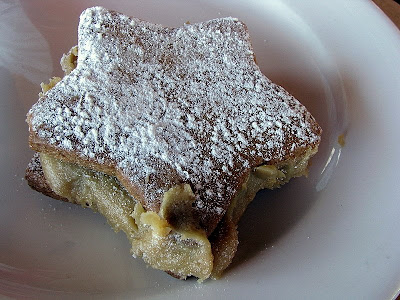 Above: The caramel star cookie had the most wonderful filling. I may be a little biased since I have an intense love of caramel flavours, but nevertheless it was a nice cookie. The biscuits themselves sandwiching the filling were pleasant enough and not overly sweet which I think was a good choice.

As with last time, the Maranui Cafe has earned my whole-hearted recommendations. It's very easy to find as well - just jump on a number 3 bus to Lyall Bay. Although I have no idea what day of the week is best in terms of being relaxed about finding a table. I'll be honest, I was more impressed by the savoury options than the sweet, although I will stress that they didn't taste bought in and probably weren't. I do find it rare that a cake or pudding in cafes will knock me off my feet with its deliciousness. This could be that I'm not eating at places that are super-expensive, but I don't think it's that big an ask.
.
Now, I don't run a cafe or restaurant, but is it that hard to make your own cakes and desserts? Surely you are running such an establishment because you actually like making food? I hate it when I go out to dinner and the meal itself has been amazing but then the blah, blatantly bought in pudding disappoints. Don't even get me started on the state of the abysmal muffins you get served everywhere these days (especially at airport cafes - it's a kind of fatalistic instinct I have that whenever I'm stuck in an airport I get the urge to spend money on overpriced cakes...) What companies out there are purposefully making these challengingly dry, unloveable muffins?Isn't that appallingly wasteful, when their time and resources could be spent making quality cakes instead? I realise I'm talking about several things at once here but...any thoughts? Am I expecting way too much? I think not.

.
In other news, Mum is still in Argentina and I'm loving reading about her escapades on her blog. Daylight savings has started here and while it means that it will be darker earlier in the day, I'm adoring this transition stage where you wake up in the morning and realise it's earlier than your body thinks it is and you can go back to sleep - bliss! Finally, Tim and I are currently very, very into 30 Rock. I don't tend to get into TV shows when they're actually on TV as we have no reception and I prefer to just buy seasons on DVD where there are no ads, which is why we're so late to this particular party. But it's brilliant and densely so, with about 7 one-liners per humorous minute and Tina Fey has created a highly endearing main character in Liz Lemon.
.
Next time: Not sure...although I suppose since Easter is a-coming I'll probably try my hand at hot cross buns again.
Posted by hungryandfrozen