lava you should have come over

We've all been there. Quietly eating your wet polenta, but secretly thinking "Alas! If only this polenta was glutinous and significantly higher in fat and lower in nutritional value. Then I'd know real happiness." Or maybe not. I have this yearly dalliance with gnocchi where just enough time has passed since I was last traumatised by it that I delude myself into thinking I can make it successfully. But every year, I fail.


For 2009's attempt my head was turned by a recipe in a magazine for gnocchi which sounded delicious - a basic choux pastry mixture with cottage cheese added. It seemed pretty non-terrifying and so I gave it a go. The gnocchi was pillowy and light and slowly rose to the top of the pan of water. I pinched one out of the pan and tasted it - argh, so good. Smooth and creamy and yet gratifyingly unstodgy.


Then came disaster. I tipped the pan into a large colander and...the gnocchi broke. All completely flattened. Nary a solid pasta nugget to be found. After putting all this effort into it I was determined that the show would go on but seriously... 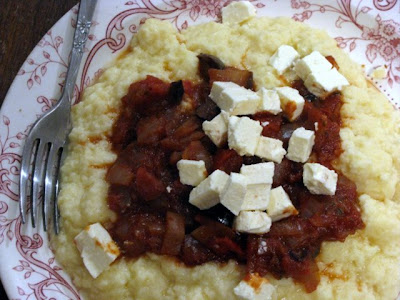 ...that's not gnocchi. The squashed gnocchi was kind of delicious, with the exact soft, grainy texture of polenta, just, you know, now with a higher GI rating and all the goodness of no cornmeal! After many years of failure, I've decided that gnocchi is like haircuts and half-marathons: best done for you by other people.


Let us distract ourselves from this ugliness with a ridiculously flamboyant cake - Nigella Lawson's Chocolate Coffee Volcano.


To mark the occasion of Tim's birthday we threw a small shindig at our place on Sunday afternoon, inviting all of our closest friends (a very small, but mighty bunch, minus a few exceptions not based in Wellington naturally). I'd only been back in Wellington for an hour, since I spent the weekend up in Auckland for business meetings and the Smokefreerockquest finals (all of which went smooth as failed gnocchi). Instead of my usual post-travel mode, which is to put on my $6 grey trackpants and stare at the TV, I got stuck into making homemade custard and stuffing softened rice paper sheets like some pearl-wearing housewife from Bonfire of the Vanities.


The whole evening was very relaxed once this was out of the way. Let's face it, no matter how many times you make custard there is still always the nagging fear that you'll end up with sugary scrambled eggs. Luckily no disasters this time, particularly fortunate considering I'd substituted coconut milk for the stipulated cream, in a bid to make the pudding dairy-free for one of our friends who swings that way. (By the way, the cake uses oil, not butter. Do not consider for a SECOND that I'd stoop to margarine.)


So yeah, marvelous evening all round, good company, good nibbles, and particularly excellent cheese provided by Dr Scotty. Having it on a Sunday evening gave it a chilled out vibe wonderfully conducive to sitting round eating enormous quantities of food and light quantities of alcohol. Tim took over in the kitchen when the sausage rolls needed baking and the pork buns needed steaming (yeah, there was no real unifying theme to our nibbles) and they were pretty exciting, but the cake was the real star. Probably because I would not shut up about it and about how awesome it was that it was dairy free. 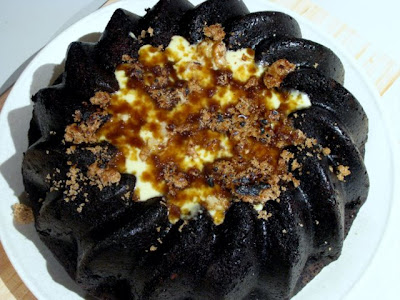 Let me describe it for you: a large, deep, undulating chocolate bundt cake (which, thank all that is good in the world, turned out of the tin neatly this time). The hole in the middle is filled with walnuts. Into said hole, over the walnuts, you pour rich custard, caramel brown with espresso (I actually forgot to add the coffee in the heat of the moment but no harm done as there was still plenty going on). Finally you sprinkle over brown sugar and using some kind of fire-producing implement, torch the sugar till it forms a caramelised, speckly creme-brulee surface on top of all the madness, all of which flows like magma once you slice into the cake to share it round.


It should probably be mentioned here that Nigella uses the words "infant-school easy" and "pa-dah!" to describe this cake. She uses these words...slightly carelessly. I wouldn't be the first to volunteer a two-year old's services in making a bundt cake which requires separated egg whites beaten to a meringue. Just sayin' is all. But, if you have a few years' experience behind you this cake is not impossible, as demonstrated by the fact that I could actually get it happening at all. It just requires a little focus and forward thinking. A kitchen blowtorch helps, I was given one for my birthday this year and was really excited about using it on something so worthy expending a little butane. 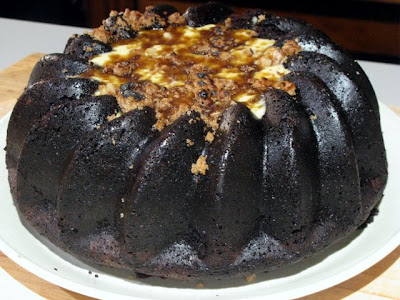 It does resemble a volcano, right? Eating it was an intense experience, and the reason the photos look so hastily snapped is because...they were. The cake is light in texture but very dark with cocoa. The caramelised sugar and hidden walnuts provide a crunchy respite against the rich, flowing custard. It's just...marvelous. It's the sort of thing that you have one bite of and decide that you want on a weekly basis. I realise it looks and sounds like there's far too much going on. But it works.

Adapted from Nigella Lawson's How To Be A Domestic Goddess


In a large bowl mix together 200g of the sugar, all the flour, cocoa, baking powder, and baking soda. In another bowl, beat together the water, oil and 6 egg yolks. Pour over the dry ingredients gradually, whisking to combine.


Take yet another bowl and whisk the 4 egg whites till stiff. Keep whisking and slowly add the sugar spoonful by spoonful. Gently fold this into the chocolate mixture a third at a time. Pour mixture into the oiled Bundt tin and bake for 40 minutes, although it may need a little longer and covering with tinfoil.


Note: I used four egg yolks and 1 tin coconut milk, using the same method. Whisk egg yolks, sugar and espresso powder together lightly. Heat up the cream in a pan but don't let it boil. Slowly whisk it into the egg yolks. Wipe out the pan and transfer the mixture back into it, cooking over a low heat till it thickens significantly into custard.


Finally, sprinkle Tia Maria over the cake if you'd like to (another thing I forgot), fill the hole with walnuts, pour in the custard, allowing it to overflow and run down the creases of the cake. Sprinkle over about three tablespoons of brown sugar and torch it till it resembles the top of a creme brulee.


To go with I made another coconut milk custard into which I stirred melted dark chocolate and cocoa and froze into ice cream. As guests peeled off we were left with a few hangers on. There was a joyfully primal moment when we all stood round a kitchen countertop digging spoons greedily into the container of ice cream. Things got a little strange after that and, (poor Tim, was it ever even about him?) as some kind of signifier of this, Defying Gravity was played at great volume for Dr Scotty who had hitherto been living half a life and had never heard it before...


On Shuffle whilst I type:


1: Like a Pen by excellent Swedes The Knife from their album Silent Shout. This song was regularly thrashed chez nous circa 2006/2007 but I heard it again yesterday while streaming George FM and was immediately taken back to those damper times. Had a nostalgic flashback to Alicia the Canadian teasing us for calling it was called "like a pin" with our New Zealand accents.
2: Cars by Gary Numan from The Pleasure Principle. Spurred on by marathon sessions of watching and listening to The Mighty Boosh I really had an urge to listen to this again. It's blindingly glorious and swirly.
3: Cornerstone from the Arctic Monkeys' latest, Humbug. It's really good. Who would have thought back in 2005 that they'd be here now?


Next time: Well, hopefully the next post will (a) arrive sooner and (2) have better photos. Like I said I've been travelling round the place, hence the yawning chasm between the last post and this one, but I got to touch base at home and catch up with all sorts of lovely and important relatives and get lots of important meetings done in the city AND act as sponsor representative at the fantastic finals for Smokefreerockquest. Plus make dairy-free custard after being back in Wellington for nary an hour. You try blogging after all that. Also, hopefully I make something that really succeeds. Either that or it's time to get a 'fail' tag to add to my list.
Posted by hungryandfrozen