america is not the world...


...but they do know a thing or two about peanut butter. 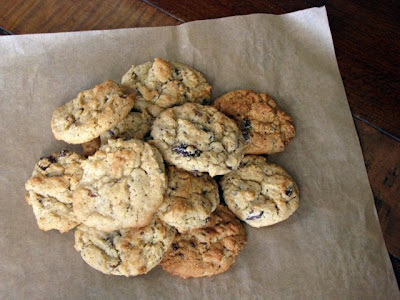 Though we'll enthusiastically spread it on our toast, I'm pretty sure I can confidently say, without sweepingly rewriting our heritage, that here in New Zealand we've never had a history of using peanut butter like America does. In fact, we're probably more likely to spread Marmite or Vegemite on our toast (The former owned by Seventh Day Adventists, the latter by Philip Morris and Australians, so choose whichever you find easier to swallow.)

Which is possibly why, when faced with an emptying jar of peanut butter approaching its use-by date, none of my New Zealand cookbooks offered any solutions for what to do with it. All I wanted was a simple peanut butter cookie, and even Nigella Lawson with her love of Americana didn't have a specific example. I've only got one American cookbook and it's all about Italian cooking so I finally turned to the internet. Had a flick through the search functions of Tastespotting and Foodgawker and found a recipe at Erin's Food Files, which highlighted a product gratifyingly American - maple flavoured peanut butter (oh the rich tapestry of life!) I thank Erin for the recipe, which I fiddled with only slightly. However you may like to refer to her website if you are already more comfortable with measuring butter in cups and baking with Fahrenheit. 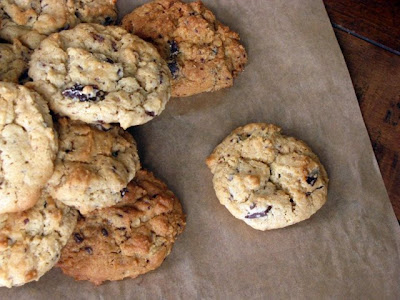 
Adapted from a recipe on Erin's Food Files.

Using a wooden spoon (because it's better that way), cream together the butter and two sugars until the mixture is lightened and fluffy. Then beat in the peanut butter, followed by the egg and syrup. Stir in the flour, oats, baking powder and baking soda and finally the chocolate. It will be a relatively soft mixture.

Drop heaping tablespoons of the mixture onto a lined tray - no need to flatten - and bake for about 15 minutes, no more. They may still be soft when you take them out of the oven but will continue to cook as they cool. Transfer them carefully by spatula to a rack or just another tray while you bake the second batch. 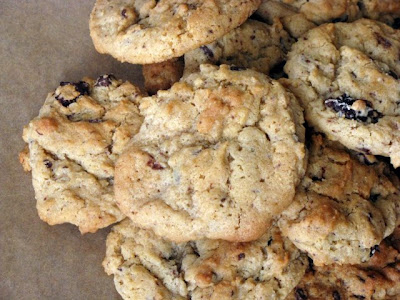 Delicious from this angle... 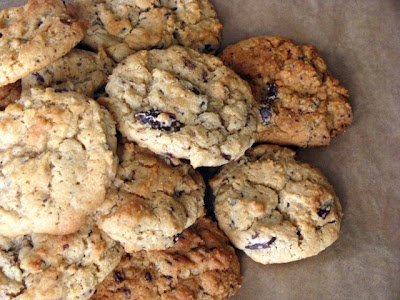 These cookies are really, really good. I can't say that the maple flavour is terribly strong, so don't fret if you haven't got any. The oats don't make themselves stridently felt either, almost melting into the mixture as it bakes to provide an overall satisfying chewiness. You want to make sure your butter is really good and soft, and it's a bit of a faff to get the peanut butter out of the bottom of the jar without covering yourself head to toe in the stuff, but apart from that these cookies are very little hassle to make and surprisingly quickly done.


Elaine Paige is coming to Wellington to do a show which is really rather cool. If you don't know who she is, here's a good way to find out. Take a dart, and throw it at any West End production cast recording since 1970-something and it's likely she played a starring role in it. Seriously, I'm surprised she wasn't cast as Elphaba when Wicked opened in London. You may not have her in your memory, but trust me, you know her so well. (Okay, sorry for the tenuous puns.) She's been all over theatre in Britain (and Broadway) since forever and it's really exciting to have the opportunity to see her. Tickets are a little on the jaw-droppingly expensive side, but I think I'll file it under "Merry Christmas to me" and deal with it.


On Shuffle whilst I type:

Not specifically on my computer, but on the shuffle of my mind if you will, is the Newtown Rocksteady, a band of many people, copious facial hair, several hats, and much skill. Caught them at the Southern Cross last night as one of the members is a friend of our flatmates. Their joyful sound whipped the audience into a frenzy of dancing (and may well have been what inspired the couple directly in front of me to kiss passionately and at great length.)

To be honest I've been to busy at work this week to listen to an awful lot of music (apart from the usual Broadway-on-my-way-to-and-from-the-office) but I have been streaming a lot of George FM and 95bFM. Both great channels, and although bFM can be ludicrously Auckland-centric, as they are primarily an Auckland-based channel it would be remiss to shake my fist at them for that. Especially when there is such great music and dialogue abounding.


Next time: I was gifted a healthy bunch of asparagus today from my flatmate's friend (the one in the band...such a kind act would I suppose now make him my friend now too). Plus I bought, on a whim, some whole wheat - also known rather charmingly as wheat berries. Am looking forward to using both tonight and documenting it...
Posted by hungryandfrozen