Email ThisBlogThis!Share to TwitterShare to FacebookShare to Pinterest
On the whole I don't really go in for reviews that compare one thing to another, because it feels as though the author is too bored to find words to describe something on its own terms. Don't even get me started on those slightly hysterical NME magazine reviews, you know, "This band sounds like the Yeah Yeah Yeahs and Sonic Youth solemnly making daisy chains and chewing vitamin pills together while Van Halen stand by, clapping slowly." (That said I haven't read NME since 2006, maybe things have changed?)


My point is, Tim and I went to a fantastic Latin restaurant/bar called Amigos for dinner the other night, and while I was there I couldn't help but think it could quite easily be the new Sweet Mother's Kitchen (another eaterie in Wellington, and enormously popular) if only more people knew about it. And then I felt bad, because Amigos was amazing in its own right and was created completely independently of anything else. But it has a similar vibe going on - funky surroundings, food that's authentic, inexpensive, and fun, plus delightful staff. Tim and I both wanted this dish that involved french fries covered in four different kinds of meat with egg and cheese (I know, and it was amazingly good, and yes, they do lighter/vegetarian food too) and the waitress said that we could share one dish between the two of us as they're huge servings. Nice, right? I'm sure most places would try and make you pay the extra money for two dishes without warning you on the size. The food was incredibly good - I'd love to go back and try some of their other dishes. Also on Fridays (and other nights) they apparently have parties and clear the tables and play music and have lots of drink specials. So, lazy writing and all, if you like Sweet Mother's Kitchen, you'll probably love Amigos too. It's right near Moore Wilsons and above Happy at 118 Tory Street (phone 04 385 1222), and open for lunch and dinner all week long. And now you know!


If I ever end up getting offered some kind of mega-million-dollar cookbook deal for this blogging lark, I think I'll definitely have to have a chapter devoted to ice cream. I love it and I love coming up with new recipes for it. Clicking on the "Ice Cream" tag for this blog will back up that statement with cold, sugary fact. With this in mind, remember that time I made Ginger Crunch Slice? Me too! I can't stop thinking about it! In fact I've made about five more batches since that first one I blogged about. Then I thought how the fudge-like ginger icing would make fantastic...ice cream. Yes. The more brain-space I devoted to it, the more utterly genius it sounded. With a little time up my sleeve today I made a small test batch to see if it would actually work. And it really did.

You know what didn't work though? Okay, so I made the ice cream, photo-ing as I went, put it in the freezer to freeze, took it out to take a photo, dropped the container on the floor, and it broke. And all of a sudden we're out of appropriately sized Tupperwear or old takeaway containers. Argh! Fortunately the plantain ice cream from last week had just got finished and so I was able to rinse out its container and transfer the Ginger Crunch Ice Cream into it. By which stage it had softened considerably and I was also considerably covered in it and thus I couldn't really be bothered trying to get a cute finished product photo - but at least there's last week's post with its cute spoonful of plantain ice cream to keep you happy should this gaping hole in my photo essay offend. 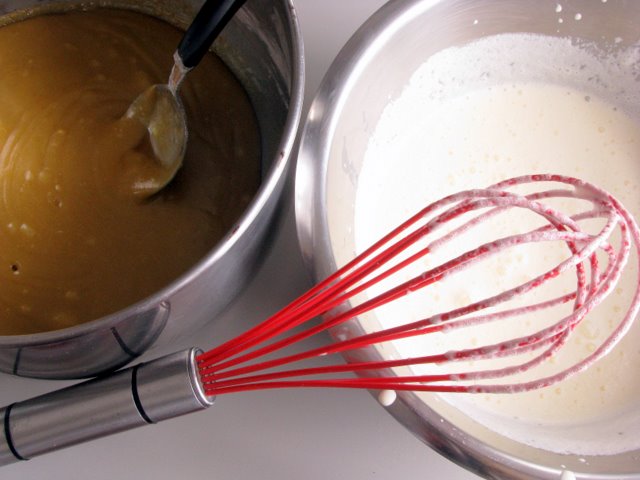 It's not a scary recipe at all, despite having the word "ice cream" in its title. Ice cream, like bread and pastry and chicken stock is one of those things that sound so much harder to make at home than they really are. But this particular ice cream took barely 10 minutes. It's the easiest of the hard-sounding stuff. 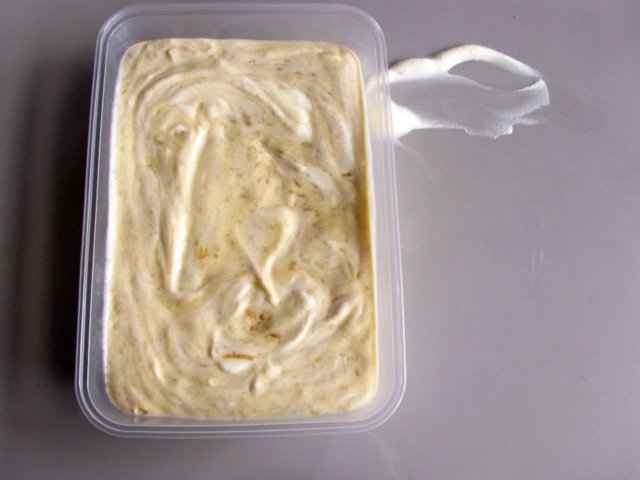 Makes about a pint. I think. Wikipedia's stance on the pint is a little confusing.

In a heavy based pan, melt the butter and golden syrup together gently. Once you have a deliciously buttery, caramelly liquid pool, take it off the heat and stir in the icing sugar and ground ginger. Then whisk the cream till it's significantly thickened but not actually whipped into peaks - it should still have a bit of movement and formlessness to it. Using a spoon, scrape the gingery mixture into the cream and mix it in relatively forcefully, to break up any larger pieces of ginger icing. Pour into a container and freeze. You don't need to churn this - just let it soften slightly before serving. And don't drop the container. If you want more of this, as well you might, just use more cream. If you're getting to the stage where you're whipping up say, a litre of cream, you might look at doubling the ginger mix ingredients.

This stuff is extremely good. The gingery mixture seeps into the softly whipped cream, countering its richness with a zingy warmth. Larger pieces of the ginger mixture become all chewy and incredibly delicious once frozen. It just works so well. I can imagine this being a really good accompaniment to fruitcake or Christmas pudding, especially in places (like New Zealand!) where Christmas falls in the middle of summer. 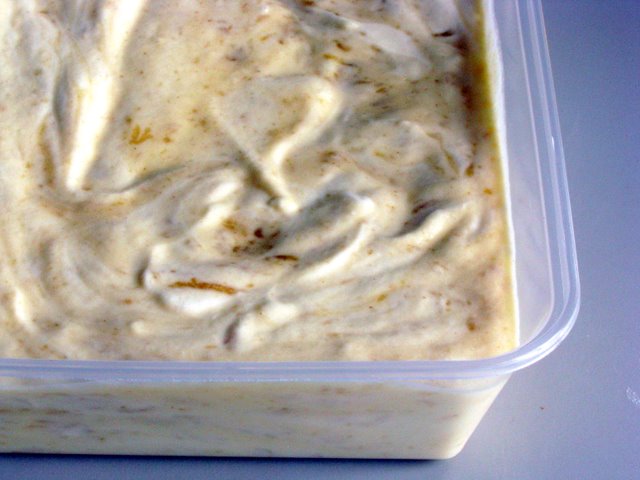 This container no longer exists, and to be honest the ice cream isn't going to stick round for long either.

That said, if I ever do get offered a squillion-dollar cookbook deal, all my ice cream recipes are here for free on this blog, thus rendering the ice cream chapter kind of pointless. Although I guess there's no point stressing over something that hasn't even been in any danger of occurring yet.

Last night Tim and I were fortunate enough to witness the All Whites qualify for the FIFA world cup by winning their game against Bahrain. What's this? I hear you say. Laura, I thought you hated all sports with a fiery passion that shall smoulder eternally! Well, I kind of do. I appreciate that it makes a lot of people happy, that on the whole it keeps you healthy and that it provides a safe environment for young people to connect with each other and learn skills. I think specifically I dislike how sports are forced upon young people throughout their schooling. Sure, some youngsters can appreciate the joy of chasing a ball with a hockey stick or running from one side of a field to the other, but let them come to it naturally in their own good time. Don't force them into PE classes when it clearly makes them sick with misery, and what kind of sick minded teachers still get students to pick people for their teams? If my children - should I ever have them - ever want to get out of doing sports at school, you bet I'll write them notes. ("Yes, young Sebastian does have cramps.")

All that darkness aside, I don't mind soccer, and indeed it can be quite exciting, if a little long at 45 minutes a side. I think it was the romance of the situation that I got caught up in - the last time we've qualified to have a punt at the World Cup was 1982. Ricki Herbert (I love that deliciously flamboyant "i" on the end of his name) was a member of that soccer team and now he's come back to coach the Wellington Phoenix, several of whom also play for the All Whites. We were total underdogs, having been not wildly outstanding in the first qualifier in Bahrain, and not exactly being world leaders in this particular sport. Suddenly every single ticket had sold out - there was barely a visible seat in the stadium, which never ever happens - not even when David Beckham came to town. All things that made for a ridiculously exciting game.

It was an amazing night of intense happiness and togetherness from the crowd and there were a lot of people I knew in the audience - like my cousin Paul who flatted with us last year - who had been following this forever and who were deeply invested in the outcome. Like I said, I'm not into sports but blind passion does make sense to me. I'm not actually a very good sports viewer, partially because I get incredibly bored, but also because no matter which side I'm supporting, I always feel bad for the team that loses. The audience occasionally booed Bahrain which I thought was a shame, given that they were trying to achieve exactly what we were but on the other side of the world and with only a handful of supporters in the audience. It's never fun watching people lose, but all that was quickly forgotten at the sight of the normally deadly calm Ricki Herbert jumping round hugging his team jubilantly. Look him up on Google images - don't you think Will Ferrell should play him in the movie of his life? Apart from the booing and the sadness of seeing the losing team lose, the only other thing that really annoyed me was the presence of streakers at the end. Firstly, it wasn't their moment, and secondly, they weren't even properly nude. At least be committed.
_________________________________________________________________

On Shuffle while I'm typing away:

Tim and I were watching Dazed and Confused the other night (oh hi, young Anthony Rapp, Parker Posey, Adam Goldberg and half of Hollywood) and found myself listening to Peter Frampton's Do You Feel Like We Do from Frampton Comes Alive! the next day. I'm not even a fan or anything, but there's something about this song...it's so slinky and groovy.

The entire cast recording of the 2008 revival of Gypsy, which is one of the most sharp, polished performances I've ever heard commited to a compact disc. I hope a good production of this comes to New Zealand sometime soon. Seriously, isn't Patti thrilling?

Finally - Charlotte Gainsbourg's new song IRM from her album of the same name is as super-listenable as anything else she's ever done. I like how it takes its time commiting to a particular direction, and you can really hear Beck's sound on the production which is no bad thing. Plus she's gorgeous.

Next time: I found more plantains at Moore Wilsons! Rejoice! Not sure how I'm planning to act on this but I think...more ice cream.
Posted by hungryandfrozen