I am currently waist-deep in Christmas Dinner preparation, and the cranberry levels are rising... 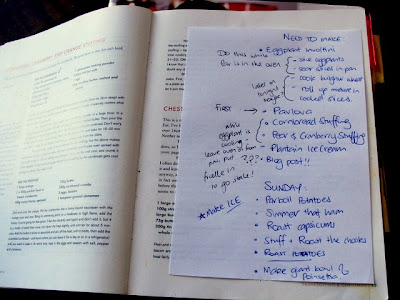 Let's not analyze my handwriting too closely...does the fact that I can't seem to commit to one particular way of writing the letter 'f' mean that I'm really, really deep and creative?


So, every year I host a Christmas dinner for our flatmates, (plus any significant others, hangers-on and plus ones) partly to celebrate my ability to insist upon cooking for large numbers of people but also to have some quality togetherness during this busy time. The day before is always a little full-on, but enjoyable, with the anticipation of feeding people and cooking vast quantities of stuff mixed in with the confusion of trying to follow my hopelessly non-linear list.


This is what the menu is shaping up like this time:

Pudding:
Chocolate Pavlova with Raspberries (or maybe strawberries...whatever's cheaper at the markets tomorrow morning really)
Ginger Crunch Ice Cream
Chocolate Coconut Ice Cream
Maybe some sugar-free jelly if we can find any packets kicking round the place. I had plantain ice cream planned but the plantains I had must have been a little old and tired, because it doesn't quite taste right. I may panic at the last minute and make another pudding...it happens.

If you're a long-time reader, you'll see that I've repeated a couple of recipes from last year - for example, both the stuffings and the involtini. The involtini, a recipe from Nigella Bites of seared eggplant slices wrapped around nutty, herbed bulghur wheat and baked in a tomato sauce, is also a repeat from last year, minus the feta this time as a friend of ours is a dairy-free vegetarian. Nigella's Ham in Coca Cola is already a proven winner but I've never done it at Christmas before. But the Coca Cola that the ham is simmered in is cheap as and if nothing else will provide a talking point should conversation run awkwardly dry. 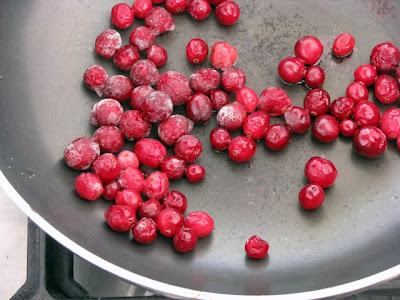 Even though my list specified otherwise, I got started today with the cornbread stuffing. I had to hustle to get this shot - you can see that some of the cranberries have already released their juices in the heat of the pan while others are still clinging to their dusting of ice particles.

Sometimes I wonder if I have heritage arching back to the American south. Or at least, some storybook version of it. I've never actually been there but the cuisine considered generally to be from that region seriously appeals to me. I can eat cornbread till the cows come home. Despite having to actually make the cornbread and then humbly crumble it, this stuffing really doesn't take long to make at all. While it's mighty fine roasted in the cavity of a chicken, the excess is more than wonderful baked separately in a loaf tin. 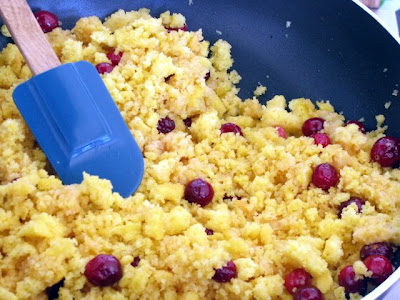 You're taking already golden, buttery cornbread, and then stirring it into cranberries and another 125g of melted butter. This is a concept that either makes sense to you or it doesn't. Me, everything makes sense with more butter added. If it appeals to you also, please find the recipe HERE. It comes from Nigella Lawson's book Feast. Like the Spice Girls, all five of whom I was fiercely loyal to as a youngster, I cannot and would not want to choose a favourite Nigella book. But if you fancy an introduction to La Lawson you could do worse than start here with this magnificent, all-encompassing cookbook.

Not quite as visually appealing but still excellent is the Pear and Cranberry stuffing from Nigella Christmas, a book that naturally comes into its own at this time of year. Its combination of fudgey, gritty dried pears, sharp cranberries, and rich pecans (I substituted almonds because that's what I had) is particularly fantastic, with salt and chopped onion stopping the whole thing from becoming like another pudding. 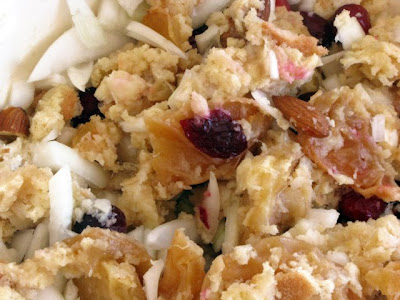 Either soak the pears overnight or cover them with boiling water and leave for a couple of hours. Drain once the water is cool. Place all the ingredients together in a bowl and mix thoroughly - even though it may feel a little spooky, just wading in with your hands is probably the easiest way. Either stuff your bird and bake accordingly or place in a loaf tin and bake at 200 C for about 25 minutes or until golden. Note - dried pears are pretty expensive. I tend to half the pears and up the breadcrumbs, but you could also make up half the weight of the pears in dried apricots.

The chocolate pavlova comes via Forever Summer (with whipped cream on the side, instead of smothered over it this time). I've made it before about 2 years ago, and loved it. However something was working against me today because while it rose up promisingly in the oven, it deflated completely once cooled. But what it lacks in height it makes up for in enormity - it spread out heaps. So I'm staying chilled out on that front.

Speaking of chilled, you know I love my ice cream. I'm particularly proud of this one because it's completely dairy free but also staggeringly good. I'm not implying the two are mutually exclusive, but it's not always the most straightforward path to deliciousness when you're restricting particular ingredients.

Gently heat the coconut milk in a wide pan, while mixing the egg yolks and sugar together. Once the coconut milk is good and hot, but not in any danger of boiling, pour it over the bowl of egg yolks and sugar, stirring all the while. Wipe out the pan with a paper towel, then pour the egg-coconut milk mixture back into it and keep it on a gentle heat, stirring constantly. It takes a while - at least 10 to 20 minutes - and you need to keep stirring - but it will thicken up into a custard of sorts. Once it is sufficiently thickened, remove from the heat and stir in the cocoa and chocolate, allowing it to melt into the mixture. Let this cool then freeze. Makes around a litre, maybe a little more. 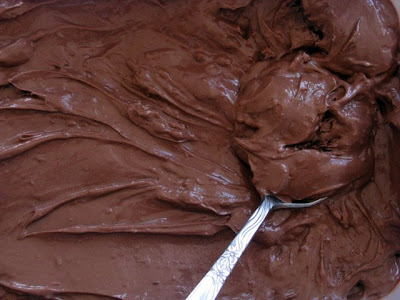 The unfrozen mixture is amazing - the thickest, lightest, softest chocolatey custard ever. Once frozen, it's even more sublime. The coconut flavour isn't actually overly noticeable to if you want to amp it up a bit, stir in some toasted dessicated coconut before freezing. This is magical stuff - don't let the fact that you have to make a custard put you off. I've made custard-based ice creams a billion times before without them turning into scrambled eggs, and if laughably clumsy I can do it, trust me, so can you.


I was actually really dithery over this particular post as I am going to be in an article about this blog in the Sunday Star-Times on Sunday, and I had this feeling that whatever I write today might be kind of important. This is the first time this blog has got any proper media attention, and I'm pretty nervous about seeing myself in a national newspaper. What if I look awful? (I had to maintain this half-smile thing, I'm really more of a big-toothed grin person, probably from my years of having to smile convincingly at ballet examiners while trying not to cry at that failed pas de chat.) What if I come across as horribly self-absorbed? (I mean, I am a bit, but still). What if someone, fuelled by Tall Poppy Syndrome, punches me in the street? Although I should mention (did someone say self-absorbed?) that the lovely lovely food blogger Linda is also being featured in this article tomorrow. I've never actually met Linda properly but you don't always need to be face to face with someone to know they're a fantastic person - I look forward to sharing a page with her. I also must say, massive kudos to the Sunday Star-Times for picking up on the idea of food blogging as a viable story option. I'm not saying that my blog is the most important issue happening to the nation right now, but seriously. I've been waiting for this.

If you are new to this blog, led here by your own curiousity after reading the article - cheers! Hopefully this is something you want to read more of - if not, I'm afraid I'm basically like this all the time. Maybe check out this post where I made my own butter which should quickly give you a good idea of whether or not you're going to want to come back here.

On Shuffle while I'm cooking:

- The Deal (No Deal) from the concert recording of Chess, featuring such luminous talent as Idina Menzel, Josh Groban, Adam Pascal, Kerry Ellis, and the marvelous Clarke Peters of The Wire. Maybe something about the mathmatical precision of the game they're singing about helped me keep focussed today.
- Speaking of Idina and Adam...while I may have allowed one or two Christmas songs to infiltrate my listening, Christmas Bells from RENT is the seasonal song that works all year long, but is obviously particularly nice at this time of year. The million different storylines being moved forward in this song makes for a listening experience that's little short of astonishing. You can hear it here but if it all makes no sense then this visual might help unpack that somewhat. I care about this stuff.
- Mis-shapes from Pulp's obviously amazing Different Class. Tim and I were lucky enough to see ex-Pulper Jarvis Cocker live at the Town Hall on Thursday night, he was utterly utterly wonderful, running through the cream of his solo material before blasting out an unexpectedly perfect cover of Black Sabbath's Paranoid in honour of Ozzy's birthday. But after all that I felt a bit of a need to hear some Pulp tunes, like this particularly urgent track.
_________________________________________________

Next time: Well, if I haven't made it onto the Listener's list of the most influential and powerful New Zealanders for 2009, then it has been a failure of a week. Oh my gosh, I'm just kidding...and that list has already been published. Next time there may well be a recap of the Christmas Dinner and everything that happened. Look out for it - there's nothing like an exhausted person who has eaten too much trying to make a sparkling, witty blog post.
Posted by hungryandfrozen