Email ThisBlogThis!Share to TwitterShare to FacebookShare to Pinterest
So every year I do a Christmas dinner thing with my flatmates (which we've started having at lunchtime but I still call it Christmas dinner, I don't know) where we get together for some good eating before going our separate ways. That's all it was in 2006, the first year, but with my intense love for making feasts, it's expanded into a bit of a mystique-surrounded juggernaut...I'd like to think. There's usually some point - in this case, Thursday night - where a bit of frantic cooking happens. Which, by the way, is my idea of a Good Time. In case you were thinking "well she brought this on herself". That's right I did. Nigella Lawson's Redder Than Red Cranberry Sauce was the last thing I made before going to bed.

Nigella seems convinced of how awesome and red her cranberry sauce is, so this year I took her at her word and tried making it for the first time. I feel a couple of decent sauces at Christmas - or any time - can act like a distracting poncho or statement hat to aggressively carved meat or disappointingly ungolden roast potatoes. It's an easy recipe, to call it child's play would insult the child. A fairly motivated bunny rabbit could probably manage this. (Of course, no offense to rabbits either. But their massive population indicates they are...fairly motivated by nature.) 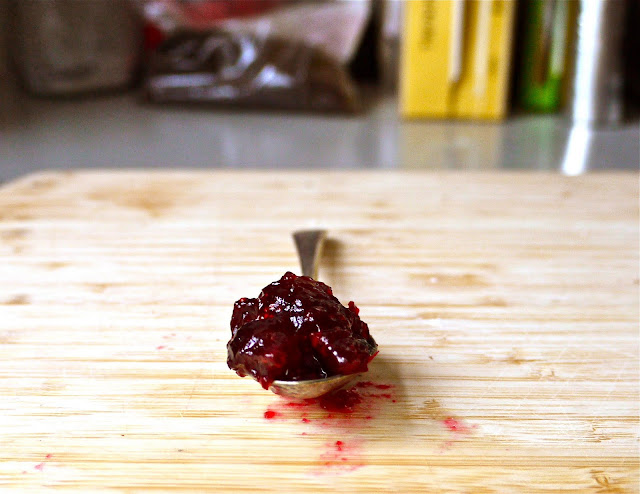 While this sauce was made very late at night, the photos were taken very early in the morning. I ended up eating way too many teaspoonfuls of the sauce while taking these photos to try and get it looking right, probably a sign that the 'soft focus sauce in a teaspoon' look wasn't the best choice. Seemed like a decent idea at the time...

Redder Than Red Cranberry Sauce
(her words, not mine. Although I like flourish so will leave it as is)
From Nigella Christmas

350g cranberries (not dried ones, although frozen is perfect, the freezer's usually the only place you can find them anyway)
200g sugar
45mls cherry brandy, OR Grand Marnier/Cointreau, OR the juice of an orange
1/4 cup water

Throw everything into a pan, bring to the boil and then simmer away for about ten minutes till the berries start to soften or disintegrate and release a lot of juice. Stir occasionally. After about ten minutes, give a final aggressive, berry-breaking stir, then allow to cool slightly before pouring into a jug and refrigerating. 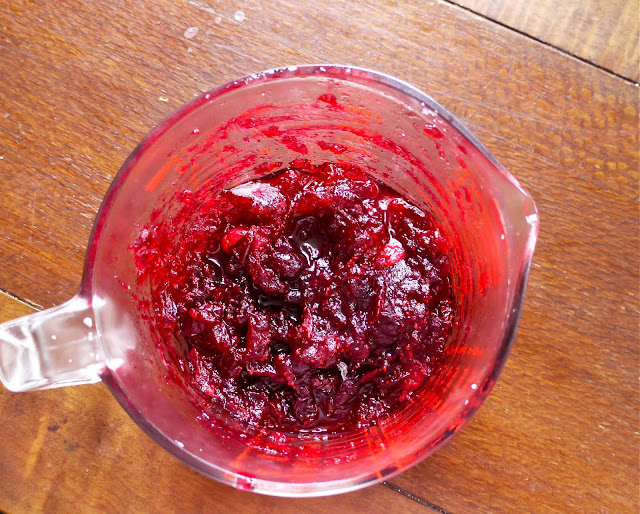 When you get up the next morning (if you made it at 11.30pm like I did) it will have become as solid as jelly - that's all the pectin in the cranberries' round red bodies. Give it a good stir before you use it and maybe thin it down with a tablespoon of hot water if you like, but spoonable cranberry sauce is just fine. 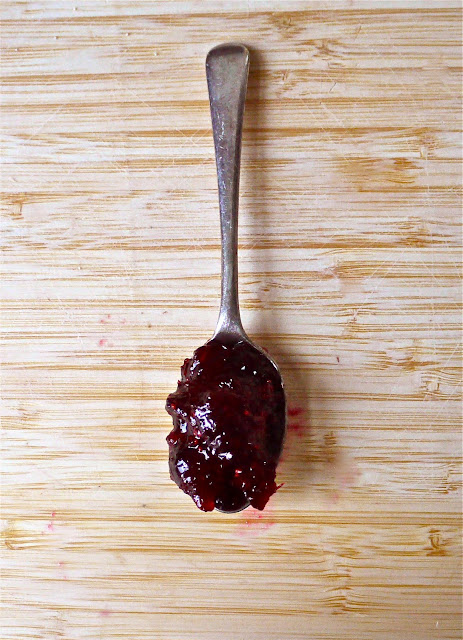 Apart from the complete easiness of the recipe, it's gorgeous, and tastes fantastic - the lack of ingredients allows the sharp lemony taste of the cranberries to shine, without being too overtly sour. It did occur to me as it was bubbling away on the stove, that a jar of this would make a pretty nice Christmas gift. If you're going down this road, some other things you could consider making and giving to people this year:

Superfast blog post today - there'll be a full rundown of the Christmas Dinner food on Sunday (or whenever I scrape together the time) though.

Brian D'arcy James (aka Burrs in The Wild Party...aka you've probably seen him in womens' magazines posing with celebrities during his stint as Shrek on Broadway) A Michigan Christmas from his album From Christmas Eve to Christmas Morn. I was SO happy when I found out he had a Christmas album. This is the only track from it I can find on youtube, but I totally recommend the whole thing. His voice (and eyebrows) astounds.

Next time: As I said, this is just a quick post...full rundown of the Christmas party, plus those vegetables I promised last time.
Posted by hungryandfrozen