when tomatoes are flying, duck, but smile

Email ThisBlogThis!Share to TwitterShare to FacebookShare to Pinterest
First: Happy Waitangi Day, everyone. As I said on this day last year, it is important to me for many reasons. Firstly, the reason it exists at all: in 1840 the Treaty of Waitangi was signed at Waitangi, near Paihia in the Bay of Islands, a place where my ancestors on both sides have strong links to. Read up on the treaty if you like, it's one of the more interesting and game-changing events in New Zealand history. Secondly: It marks the date that I had my first ballet lesson, 21 years ago. Evidently ballet waits for no public holiday. A tough business, had I lingered till the next day I could've been considered "past my prime" (FYI: this probably isn't true, and also, I was three years old)

Anyway, yikes, February already, so there's only one month left of summer. And in Wellington it feels like winter's cutting ahead of autumn in the tuckshop line. One month ago it was all sand and sunscreen and deliciously dizzying heat, now it's all sporadic sun, pushy gale-force wind, greying clouds and woolly jumpers. Either that or knuckle-dragging humidity. What gives? 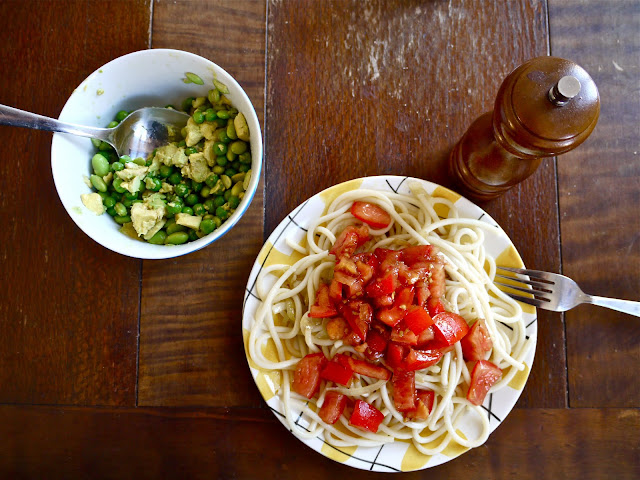 One way to remind myself that it is still in fact summer is to immerse myself culinarily in seasonal food, which - bonus - is generally cheaper, easier to get hold of, and tasting its best. Like the tomato, currently at its richest red of colour, fullest of cheek and glut-est of availability.

I read a recipe of the much-googled and widely lauded Martin Bosley's in his food column for The Listener magazine recently which completely took my fancy: a sauce of raw, chopped tomatoes, steeped in good things and tumbled over pasta. I stupidly didn't actually copy it down anywhere, and unfortunately The Listener doesn't seem to have an up-to-date online recipe database in the same way that, say, Cuisine magazine does. (Not that they're obliged to provide me recipes for free. But gee, if the internet hasn't half conditioned my brain to expect it!)

I knew there was something particularly impact-y about this recipe which made me want to recreate it, but I just couldn't remember what. So, with a bowl of rapidly deflating, perfectly ripe tomatoes bought on the cheap, I decided to just be inspired, and improvise. 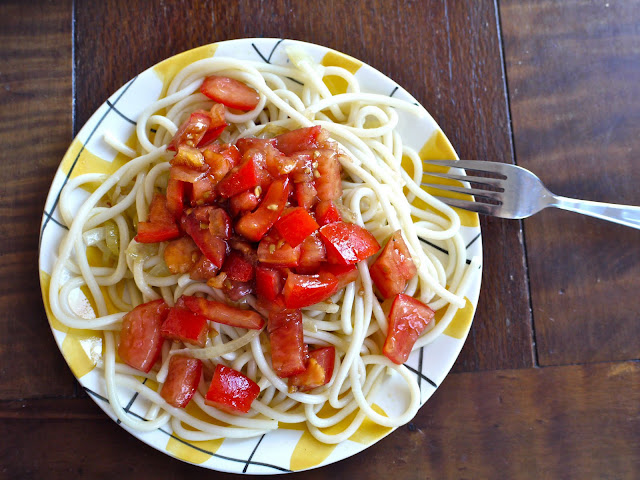 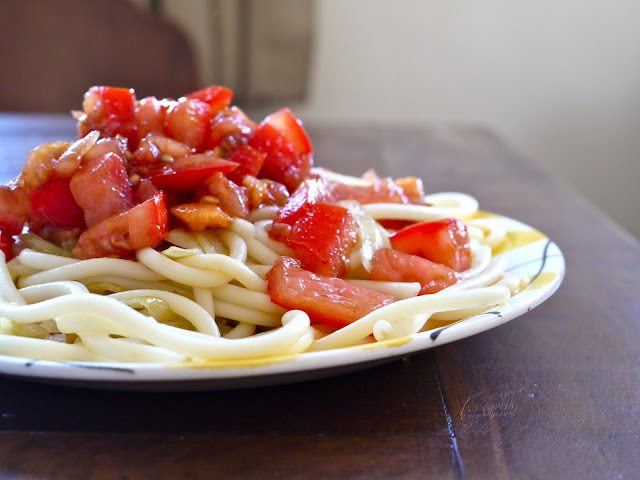 Inspired by a recipe of Martin Bosley's

3 ripe tomatoes
Avocado oil (but of course, olive oil is so welcome here instead)
1 teaspoon cinnamon
1 teaspoon sugar
Salt, flaky sea salt if possible - tastes nicer, and you need less.
1 T Balsamic Vinegar and/or the juice of a lemon
1 clove garlic, crushed
Around 180g to 200g spaghetti or other long pasta, to serve

Roughly chop the tomatoes, fairly small, and pile them into a non-metallic bowl (apparently metal does very bad things when it reacts to the acidic tomatoes.) Pour over as much avocado or olive oil as you like, but around 2 tablespoons is what I used.

Sprinkle over the salt and sugar, the vinegar, and the garlic, and mix thoroughly. Leave for as long as you like at room temperature, but at least do it before you get started on the pasta, so it gets a decent sit.

Bring a large pan of water to the boil, salt it, and cook the pasta in it, till it's done to your liking. Drain and divide between two plates. Spoon over the chopped tomato 'sauce', pouring over any juices that have collected, and drizzle over more avocado or olive oil if you like.

Great as this is, I had a massive head-desk when I eventually located the original recipe of Bosley's - it had almonds and chilli in it. How could I not have remembered something that deliciously significant? My invention was cool, but almonds and chilli. I want that in a sauce.

Still, mine had its own cinnamony charm, with the tomatoes soft and cool and luscious on the hot pasta, the avocado oil's mellow nuttiness against the sweetly sharp balsamic vinegar and almost lemony-fragrant tomato juices dripping into the depths of the tangle of pasta. Because of how I chopped my tomatoes it was less a sauce and more of a...pile of stuff. But I liked it. 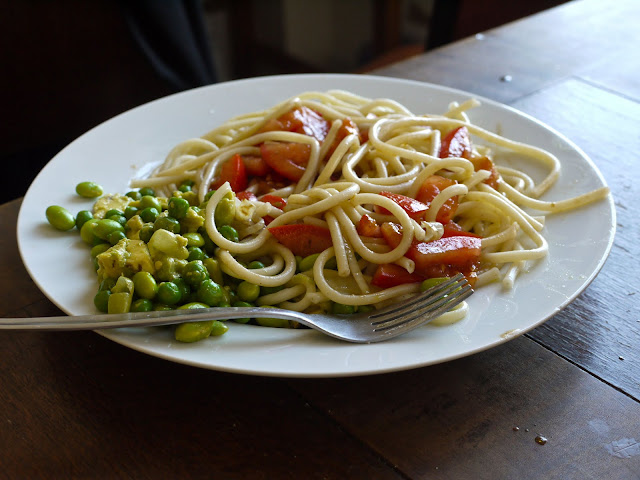 To go with I boiled some peas and edamame and once they were cool sprinkled over a little sesame oil, and chopped in what I could salvage from a disappointing avocado. It was delicious, and pleasingly reflective of the avocado oil with the tomatoes. The reason I used avocado oil is because I got some for Christmas (cheers Dad!) and it's really delicious, furthermore I've run out of olive oil and every time I go to buy some more it just feels too expensive. However if you're the other way round, as I said in the recipe, of course olive oil is great to use here too. 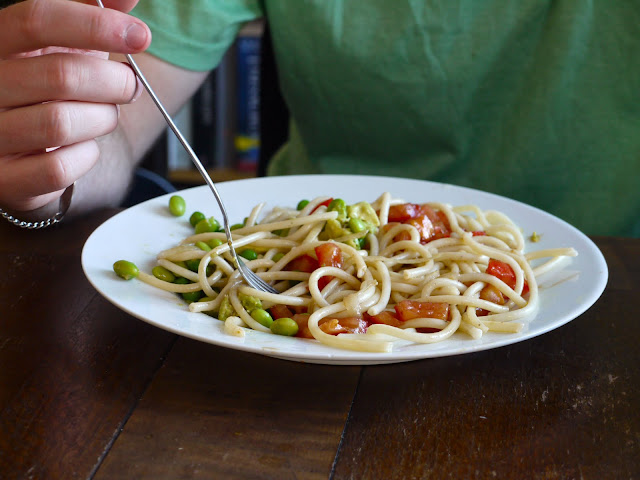 Poor Tim had to pause here for a minute because I looked across the table and suddenly felt like what I saw (alas, minus his pleasant above-shoulder region) needed to be photographed. It wasn't posed, he was about to feed himself and I wailed "don't move!" and grabbed the camera. But still, nice to shake up the usual one-aerial one-closeup-fuzzy shot routine.

So: as long as you can handle, or at least sell to the people you're feeding, the idea of pasta and a chopped up vegetable being your dinner, then this is one truly summery and seriously unpricey recipe which not only requires hardly any effort, it's also extremely delicious and not so heavy and stodgy that you need to lie down immediately with a cold compress after eating it. Cheers, Martin Bosley for the inspiration. As I said, he's heralded wide and far but I've never actually tried a recipe of his, and I guess...this doesn't really count. While some of his recipes, though delicious, seem a bit inaccessible to my time, skills, and cupboard contents, I can't fault the blueprint which inspired this blog post - a simple, sexy and delicious-sounding tomato sauce. And he also gets a free pass for life because when I approached him to say hi at the City Markets one time, he said "Oh, you're Hungry and Frozen" which, let's face it, is a fast way into my heart.
___________________________________________

Beach House, Walk In The Park from Teen Dream - gosh this is a pretty song, like the catchiest bits of Where Is My Mind and, um, Eyes Without A Face combined...at last. We were lucky enough to see Beach House at Laneway Presents: Wellington on Tuesday night, and this song was an early and beautifully delivered highlight of the evening, distracting Tim and I entirely from the fact that our camera frustratingly wasn't allowed in, and there was no coatcheck so Tim had to run it home. I whinged about it at length, more quizzical than aggrieved by that point, on 100s and 1000s. That, and perhaps-uninformed comparisons aside, I do like this song a lot and it was lovely to see it performed live.

Mum sent my iPod back along with a whole bunch of other goodies (lentils, pasta, Whittaker's Chocolate and so on) and having been without it for three weeks, it's quite the sensory overload to have music and so much of it again while I walk around. I've been reconnecting seriously with the cast recording of Hair (Original Broadway and 2009 Revival Broadway cast recording, thank you).

Next time: It was going to be ginger cut-out cookies, and lovely as they are, I made this morning a batch of Nigella's Norwegian cinnamon buns and they were so astoundingly good that they're overtaking the cookies...

*speaking of disappointing avocados, feel free to read the guest post I did for the blog about Diamond Dogs, a play that's going to occur in Wellington on the 15th, 16th and 17th of February.
Posted by hungryandfrozen