Email ThisBlogThis!Share to TwitterShare to FacebookShare to Pinterest
Firstly - got unexpectedly mentioned in the Sunday Star-Times newspaper today in the Focus section, very exciting. With the title of Comfort Food even, something I feel strongly about (well, that food comforts, at least). So if you're here because of that, you clearly overcame the hurdle of some funny printing on the photo, making me resemble a hyperactive 12-year old who's just eaten a pineapple Fruju. I guess I look like that in real life plenty to be fair. The generous comparison to Nigella Lawson made me smile and do a self high-five although I did wonder about the mention of "skinnier" - is that positive/negative/true/necessary? Anyway, I hope sincerely (and unsurprisingly) that you like what you read and stick around. 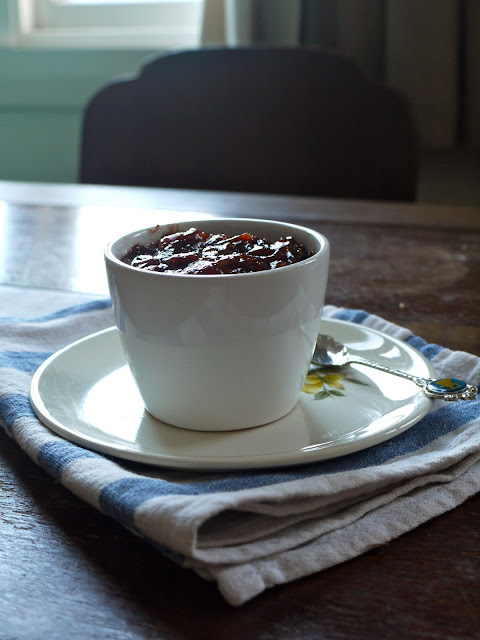 Given the events of the past few days making jam might sound misguidedly whimsical, but my intentions were practical. I had a whole lot of rhubarb in my fridge from a lady at work who has an enthusiastic plant, and it needed using. This jam recipe keeps for ages in the fridge and involves not much more than a little time, a bit of stirring, and a few thousand granules of sugar.

But first: a non-jam related preamble. I flew back to Wellington from Auckland today. I'd been working at Pasifika festival at Western Springs. Ate some awesome chop suey and a massive steamed pork bun from the Samoa village for lunch. Then immediately regretted it because my already indecent sweatiness from the fiery sun was compounded by the heat of the food. Cooled my insides with this juice from the Niue village called Tropical Crush - banana, apple, pineapple and coconut blended together.

Had a run-in that I thought was pretty funny.

I was talking to this kid who mentioned she was going back to Wairoa after the festival.
"My boyfriend's from Wairoa" I said.
She asked what his name was.
He doesn't live there anymore, I said, but I mention his mum's family's name.
She knew someone with that name in Wairoa, turns out it's Tim's cousin.
"Is [Tim's cousin] your boyfriend?" the girl asked, suddenly confused.
"Nooo" says I jokingly, "he's a bit young for me!"
The girl still looks thoughtfully at me, squints and says "nah...he's in Year 12 isn't he?"

Year 12 is 6th Form, FYI, or just under a decade younger than myself. Refrained from asking "so just how old do I look to you?" because I remember having a skewed idea of what age was and what constituted being a legitimate grownup and that sort of thing. So instead I smiled and said "small world huh".

I also caught up briefly with Mum and my godmum Vivienne who were at a Spanish course in town (received a txt saying "Talofa y Hola") which was very, very lovely. But it was hard to maintain that relentlessly upbeat work-mode in the face of the incomprehensible disastrousness continuing to unfold in Japan. The footage was both numbing and terrifying. I really hope you all quickly get in touch with anyone you know over there. 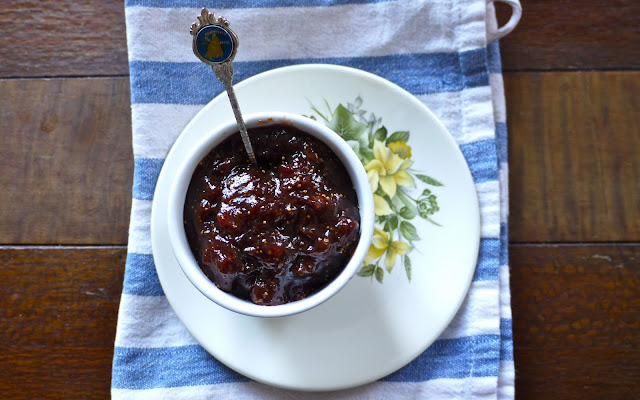 So again I turn to Aunt Daisy, whose quantity of recipes, old-timey resourcefulness (there's a lot of things that weren't great 'back then' but hot damn they knew how to be resourceful) and her resolutely authoritative tone brings me comfort always, but especially now. I'm not sure if Aunt Daisy was super kindly, or more of the snapping-turtle variety of older lady, but when she drops lines like "Cut bread into 1 inch cubes. Roll in condensed milk (sweetened). Fry in hot deep fat" I feel like I'm posthumously sinking into her blouse-clad bosom for a big hug.

This jam recipe is very simple, even though it's not instant. Nevertheless I managed to burn it while - haha! - tweeting about how great my jam was. I acted fast - removed the pan from the heat, chucked it in the sink which I started filling with cold water, and then grabbed a spatula and transferred the jam to a bowl. I slid a cautious spoon into the bowl of jam half an hour later, tasted it and...all was forgiven. It tasted amazing. The sugars of the rhubarb had become toffee-intense during their brief scorching, and apart from the general texture being a little sticky instead of jammy (nothing that adding a bit of water while reheating couldn't fix) the jam was completely salvageable. Still, it's probably better if you manage not to burn it at all. So save the self-congratulatory tweeting till after it's off the heat. 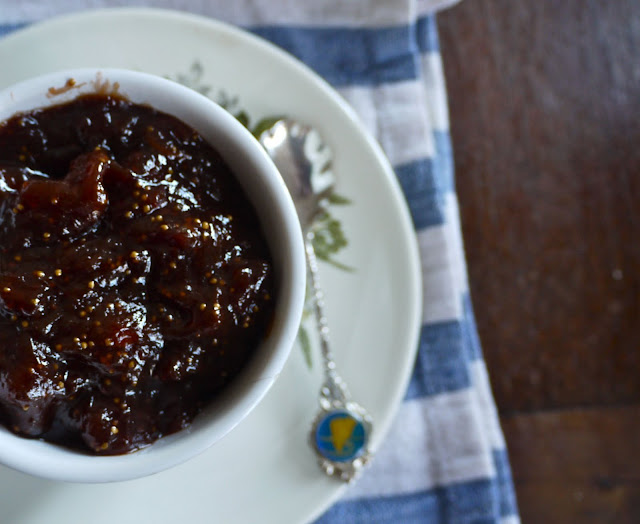 Aunt Daisy asks for 6 pounds of rhubarb and 6 pounds of sugar and 1 1/2 pounds dried figs. This means you need roughly 2.5 kilos of rhubarb. Different times back then. I've adapted it a bit to suit my needs, the good thing is the method works for however much rhubarb you have.

1: Weigh your rhubarb and then measure out the same weight in sugar. Trim and chop up your rhubarb, place in a non-ceramic bowl, layering with sugar from your measured amount. Reserve any excess sugar. Cover the rhubarb and leave overnight, or some similar length of time (like, if you do this in the morning you could come back to it late afternoon or in the evening).

2: An incredibly awesome pink syrup should have formed in the bowl of rhubarb, and everything should be all soft and shiny from the sugar. Drain off the syrup (reserve for adding to soda water or vodka or whatever you like, really) and tip the rhubarb slices into a pan with the remaining, reserved sugar from your initial measurement.

3: Bring to a simmer and don't go tweeting about how cool you are, because the sugar heats up fast. Instead, keep stirring. The fruit should collapse fairly quickly and start to smell amazing. Time will vary depending on your quantities, but if you're feeling like it's going to turn into a blackened mess, just tip in a little water or better yet, some of the syrup. Aim for ten minutes or so stirring over a low heat.

4: Chop up as many dried figs as you like, I'd go about a cupful or a decent handful per 500g. Add them to the rhubarb mix and simmer till the fruit softens and disappears. 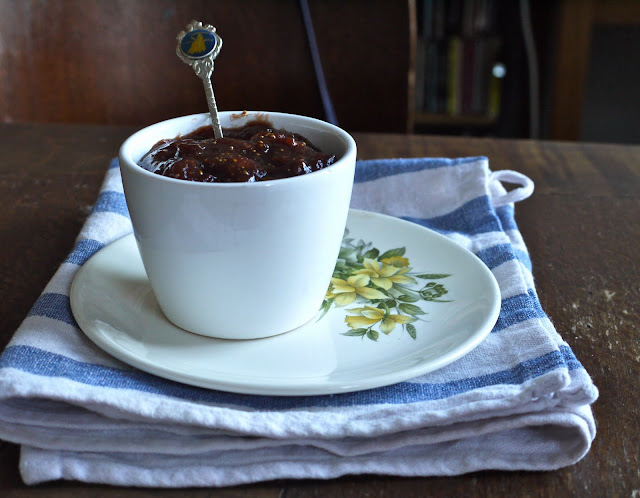 Rhubarb and figs aren't as sexy as raspberries or peaches or anything. Rhubarb's sweetness is austerely astringent and dried figs have a kind of medicinal, camphor-chest sugariness to them. Simmered slowly together though, they bring out the best of each other, giving you jam of rich, honeyed, fructose-deep flavour, interspersed with the unmistakable grit of fig seeds. It sets good and thick and can handle a little overheating. Cheers, Aunt Daisy.

In case you're thinking "great, now I have a sodding great pile of jam to use up", you could consider making it into these steamily delicious Germknodel, using it in this loaf cake, spreading it on top of hot homemade bread...or on buttered toast using whatever you've got.

Been so busy but...we were flicking through radio frequencies on the way to the airport this morning, and Sinead O' Conner's Nothing Compares 2 U came on. Something about the upward direction of her "Nuuuuthing" on the the chorus always gives me shivers.

Next time: Your guess as good as mine - I'm heading back up to Auckland again for work on Thursday, and so my dream of making that mango pickle is now fading a bit with my distinct lack of time...
Posted by hungryandfrozen