like collard greens and whole eggs I got soul

Email ThisBlogThis!Share to TwitterShare to FacebookShare to Pinterest
Last time I said I was going to be posting a recipe for Snickerdoodles next. Oh, how I lied. Because instead I became distracted by this inconceivably good recipe from Yotam Ottolenghi. 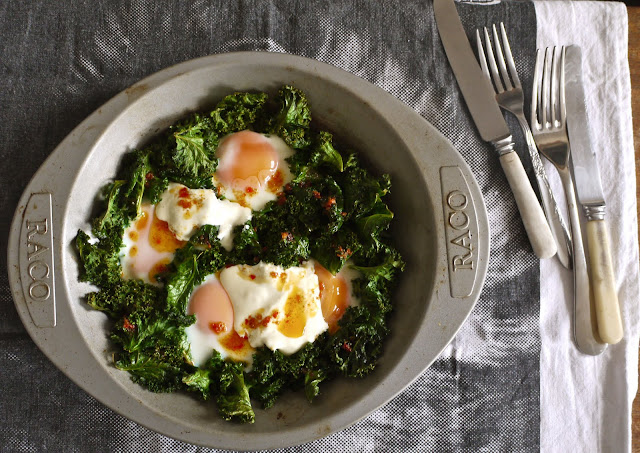 I'm sure I've told this story a squillion times already and, depending on your mood, it may go some way to illustrate how nauseatingly/adorably (take your pick!) zany/useless (also take your pick here!) Tim and I are, but here goes anyway. In the summer of 2007/2008 we went grocery shopping. At first we looked at the cartons of a dozen eggs. Not enough for us! So we looked at the trays of 20. And there, on a clearance trolley beside the trays, was a plastic wrapped, many layered stack of egg trays. Tim, being handier with mathematics than I am, worked out that even though 80 eggs was kind of a lot to get through, the saving on cost per egg compared to the single tray or dozen carton was so tremendously significant - especially considering they were free range eggs - that we'd be completely unintelligent not to buy the huge tray. Of 80 eggs. Congratulating ourselves on such a bargain, we left the supermarket.

When we got home, a cursory glance at the label revealed the reason this multitude of eggs was so reasonably priced. According to the use by date, we had just under 10 days to eat all 80. Somehow we made it happen and with protein coursing through our veins came out the other side with not one egg wasted. The reason I bring this up is that, on a free weekend, to use up some of said eggs I made Nigella's Strawberry Ice Cream and Chocolate Mousse Cake from Forever Summer and How To Be A Domestic Goddess respectively. These two recipes saw me successfully separate 18 eggs in a single day.

But while I can coolly part yolk from white eighteen times over and turn them into such delicate treats as mousse and ice cream, I have always been terrible at poaching eggs. It kinda sucks.

Luckily, thanks to this immensely delicious recipe I found in Ottolenghi's book Plenty, poached eggs can sit down, because these baked eggs eclipse any ambition I have to be a decent poacher. 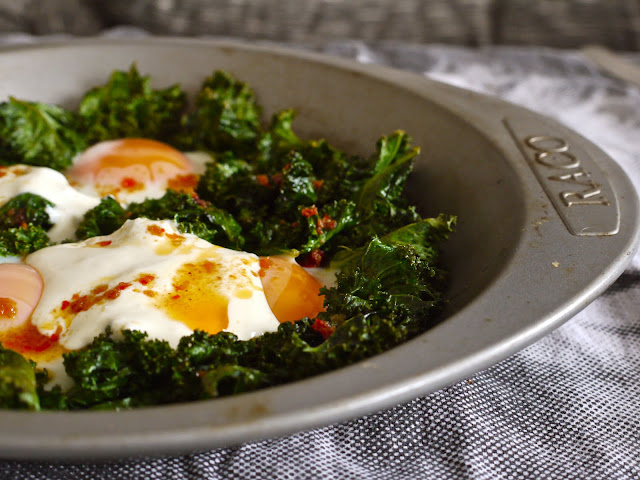 It's so gorgeous. The first shamefully conservative thought that crossed my mind was "eggs and yoghurt? AND green stuff?" but I'm glad I squashed that thought down. Here is the recipe to recreate it yourself, even if - maybe especially if - you think you're not the sort of person who could veer away from plain eggs on toast.

Baked Eggs with Yoghurt and Chilli

Set your oven to 150 C. Heat the oil in a large pan, and gently cook your greens till they wilt a little.

Tip this into a small oven dish - I used an old pie plate - and make four indentations in your greens so that the eggs have a place to go. Carefully crack an egg into each space - being careful not to break the yolk - and bake for about 10 - 15 minutes. Don't overcook, but make sure the egg whites are no longer translucent. The very low heat means you don't have to stress about this too much.

While they're cooking, mix the yoghurt and garlic together and set aside. Melt the butter in a pan (the same one you cooked the greens in if you like) and add the chilli, paprika, and let it cook away till the butter foams a little.

Spoon the yoghurt and the butter over the eggs. Serve on toast or just as is.

The thick, luscious garlicky yoghurt and the almost chewy greens, gorgeously verdant against the golden eggs, which yield to the fork's prod, the salty-hot butter merging with the rich, slowly spilling yolks and coating the astringent leaves...it's really something. 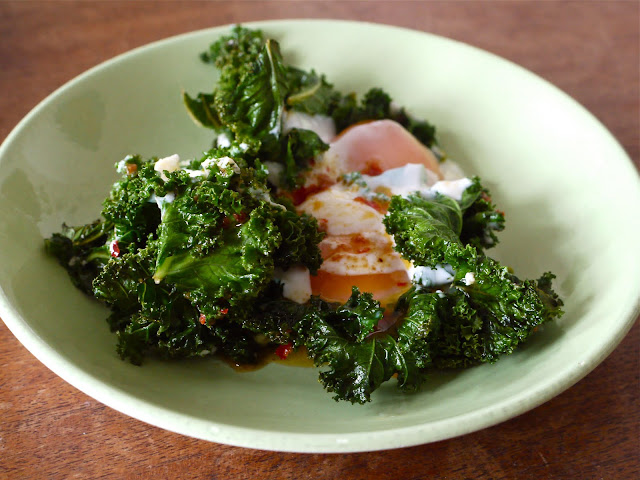 Ottolenghi says to use rocket as the green stuff but I definitely recommend curly kale, if you can get hold of it - its crisp leaves stand up to the heat, without getting all limp and watery and gross. While it might be a bit harder to find, it's no more expensive than spinach, and it's not one of those stupid leafy green vegetables that perishes floppily in the fridge the day after you buy it. Kale is built to last. If you wanted to make this dairy-free, you could just use olive oil instead of the butter and I bet tahini would be so, so good instead of yoghurt. Assuming you're more likely to have tahini than yoghurt, that is. 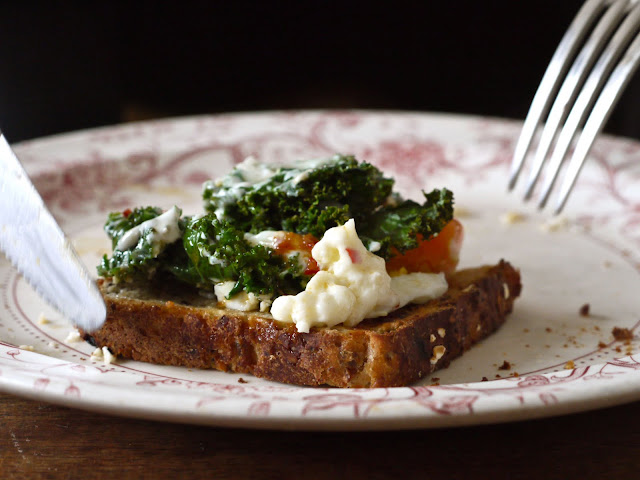 On that note, does anyone have any particularly reliable tips for poaching eggs? Mine is to pay someone in a cafe to do it for you.

It was so, so dark when I got out of bed this morning, and the sky had barely lightened its shade to something daylight-resembling when I left for work. I'm surprised at how glum it made me feel. I will have to keep that in check, I mean if I'm feeling this way in early June, the bleak midwinter July mornings will probably be greeted with a howl. Unless I can get up early enough and make myself this for breakfast every morning. Might be time to look for another clearance tray of eggs...
______________________________________________________

Probably definitely the snickerdoodles...and I will endeavour to listen to something other than Godspell. Victor Garber was just so dreamy back then.
Posted by hungryandfrozen