I did this training session thing at work on Monday afternoon, where you fill in a questionaire online and from that they ascertain what kind of patterns you follow and which personality aspects affect the way you work. It basically told me that I am a creative, beliefs-driven, spirited hippy who is quite au fait with a lack of structure and can be very relaxed with deadlines. It was rather like a horoscope reading session - and a lot of it rang true with me.


For everything on this earth except graduating. I graduated on Tuesday (with a Bachelor of Arts in Media and English Lit) and was a nervous wreck the whole time. For this one event, I want structure and rules and advance, pertinent information. Which I feel we didn't receive. Had the "So, You've Decided To Graduate" pamphlet told us specifically how the evening was going to be run, I would have been a lot more chillaxed. But all it really conveyed was something to the effect of "you will instinctively, like a spider making its web, know where to walk to and where to be seated." A little mystery and coyness is fine, but in the proper context, please. Had I known that the whole thing would be quietly run by wonderful attendants stationed every two metres to tell you exactly where you were supposed to be going, in soothing, hushed tones, I wouldn't have stressed quite so much.


That aside, it was a wonderful day, and I was lucky enough to share it with lots of other people I knew who were graduating, including Tim, a colleague, an old schoolmate, former flatmates, and one of my cousins. Parading through the town was exciting, if a little fraught - the (miraculously rain-free) wind threatening at any point to separate trenchers from heads, and parents constantly yelling out "stop! look over here!" and attempting to take photos while the orderlies barked at us to keep walking and stay within the lines. An old family friend joined us for lunch at the Black Harp (where I had a wonderful mushroom ragout) and after the ceremony itself Tim's and my families shared a raucous meal at the reliably fantastic BYO Istanbul on Cuba Street. The ceremony itself was something of a blur, my surname being Vincent I was right at the end and so couldn't properly relax until it was all over. We were priveleged to have speak at the event (after getting an honorary doctorate), author and Victoria University alumni Lloyd Jones, whose book Mr Pip won the Booker Prize. All in all a very exciting, momentous time - swelling string quartet music would not have been out of place at several points - and I miss wearing the robe and swooping through town allowing the excessive fabric to subtly draw attention to my higher education and no doubt superior intellect. I am Laura Vincent, BA. It's funny how fast those three years went - I remember reading the book of Anne of Green Gables where she's doing her schooling and thinking "well, LM Montgomery rather skimmed over those three years a little flagrantly", but no, it really does go pretty briskly.


My parents arrived on Monday night took and Tim and I out to dinner, well actuallywe took them out to dinner as neither really know Wellington well. Wanting to find somewhere near their hotel that wouldn't require a traumatically lengthy walk, somewhere non-franchisey and something a little "Wellington", I chose La Bella Italia on The Terrace. I had never been there before but have heard good things about it. It wasn't full and the atmosphere a little bright and cold for an Italian place but this makes sense as it is a deli as well as a cafe (with significantly more reasonable prices than another visible Italian cafe in Wellington). Our service was prompt, friendly and matter of fact, the waitress being able to talk to us at length (when questioned), about the puffin-eating habits of the people of the Faroe Islands and also able to make a fabulous long black coffee.

The food was fantastic - well thought out combinations simply served and made with beautiful ingredients. 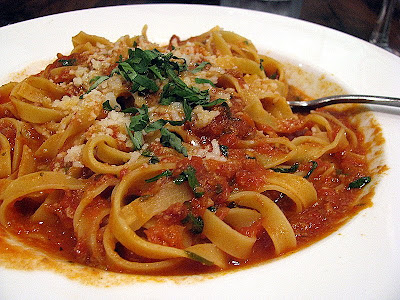 I had the egg tagliatele with tomato bolognaise sauce and parmesan. The pasta was delicious although had just a touch more bite to it than I like. The sauce was excellent - rich, tomatoey and nourishing. 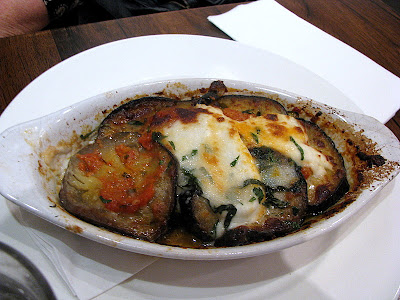 Mum had the most wonderful vegetarian eggplant dish - actually I think we all ended up eating vegetarian that night for some reason - the eggplant was cooked perfectly and the sauce was divine. 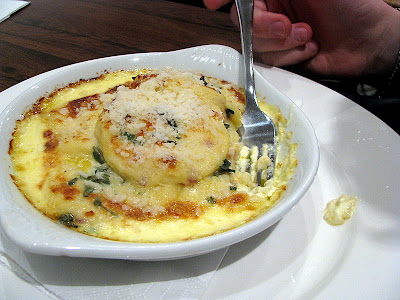 As you can tell I basically tasted everyone's dinners including my own. Tim had the gnocchi which was incredible - smooth and surprisingly light and tasting of the finest, milkiest ricotta cheese. Dad had a different kind of gnocchi, with a tomato sauce, unfortunately the photo didn't turn out so well but he seemed to enjoy it. Despite being comfortably full we decided to get two desserts and four spoons to share them with. 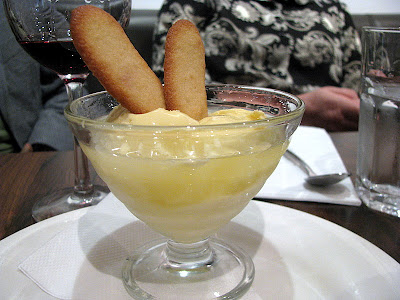 First up was vanilla gelato with our choice of liqueur. We went for limoncello, which was silky and tangy with a not unpleasant alcoholic kick. The liquid against the smooth, cool gelato was quite wonderful. It came punctuated with two thin, crisp biscuits which were perfect for dipping into the last of the gelato and limoncello as they melted together. 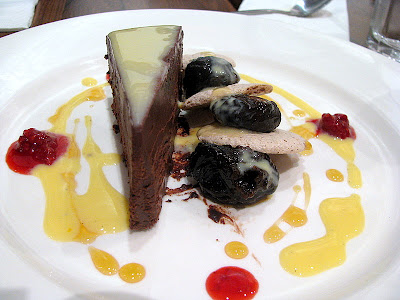 This chocolate and prune terrine with hazelnut meringues was incredible. So often - too often - when we go out for dinner the dessert has blatantly been assembled or unwrapped rather than created. So it's nice to find a place where it's quite clearly the opposite. This terrine was incredible - the dark chocolate bitter and smooth against the sweet crunch of the meringues and the soft dark juicy prunes.

Verdict: I will definitely come back here, if not right away for a meal then definitely to check out the deli side of things. I need some of that pasta.

On Shuffle while typing: