the hardest butter to butter

Email ThisBlogThis!Share to TwitterShare to FacebookShare to Pinterest
Maybe in years to come, when my blog has changed lives, and gets turned into a beautiful book, and then the movie of the book of the blog changes peoples' lives (oh wait, that's Julie and Julia that I'm thinking of, and somewhat more feasibly, I'll probably slide quietly into further obscurity), and a naive child asks their grandparents what the ultimate blog post that would describe Hungry and Frozen would be, what the very distilled essence of this whole strange business is, the ur-text, the definitive piece of writing, their grandparents might lean down and utter with a wise, earthy croak: The one where she made her own butter.

I call this one: Self Portrait. 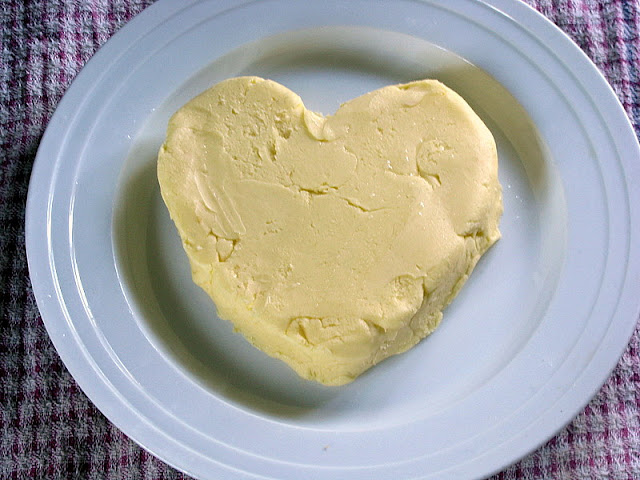 Okay, whoa, things got self absorbed there for a bit, but such is the nature of blogging. I'll be straight with you: I love butter. I don't know what it is, there's definitely the soft, creamy, golden, slightly saline flavour which plays a part. But then there's also the texture, something that can't be imitated. It's a texture echoed in other good things - dark chocolate, pistachios, avocados... I just love it. Somewhat aggressively. I love what it does for cakes, I love butter icing on top of cakes, I love butter smeared thickly across freshly made scones which also have butter in them...I'm not the only person like this, right? Not to mention my strident rejection of margarine. I don't mind cakes with oil in them, some are just supposed to be that way, but don't get me started on margarine - I'll go all twitchy. Anyway, some other lovely bloggers (like Culinary Travels and Tea and Wheaten Bread) have made their own butter recently, which inspired me to do it myself - it seemed so right somehow. Making butter. By hand. Being at one with it. Well, more so than I normally am...

It's simple enough, but there are some rules to be observed. Rather like the movie Fight Club, which, by the way, I'm secure with never having seen because I know it will be light years too violent for me to deal with. Thanks to its Wikipedia page though, I'm still able to discuss it critically with people who actually have watched it.

The first rule of making butter is: You need far more cream than your ability to gauge will let you think you will need, and then some. 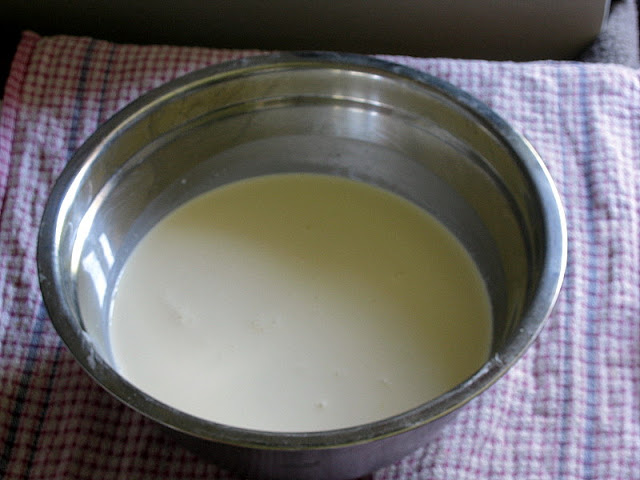 I used a litre, which in America you could also see as four measuring cups full, of cream. To add further confusion, you'd want to make this double, or heavy cream, if you were in Britain or America respectively, since our cream in NZ is just called 'cream' and we don't tend to have divergence into 'single' or 'double'.

Why can't we all just get along?

Appalling lack of culinary unity aside, 1 litre/four cups cream will yield around 400-500 grams of butter. You'll also get about 250mls/1 cup of gorgeous buttermilk. Where the rest goes, I don't know. I can't pretend I know much about science, which I suspect could go some way to explaining this conundrum.

The second rule of making butter is: Keep going. Don't stop when it looks like this picture below. 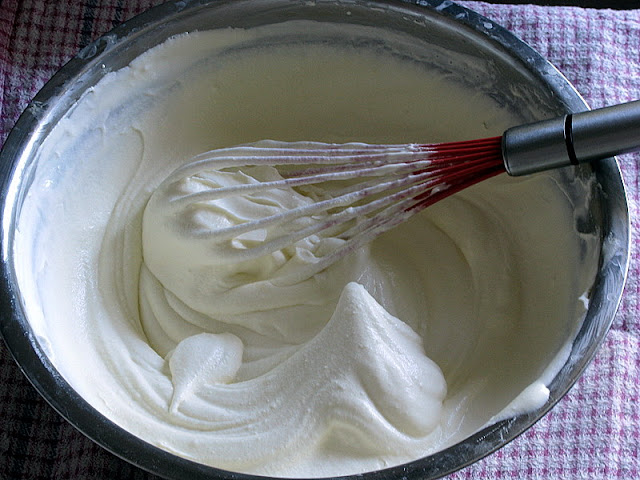 Why yes, when I make stuff by hand I mean by hand. A somewhat deranged venture, I grant you, whisking a litre of cream into stiff peaks. But my justification was, if I was going to make butter I might as well really do it, not remove myself from any of the process. Just as I love kneading bread by hand, not in a machine, so it follows that whisking cream doesn't really bother me.

I do use the electric beaters, it's just when all's said and done, and you've finally found the machine in the bottom draw with the potatoes and onions, located the beater that fell behind the oven and the other one which was behind the pots and pans, sitting quietly in a plastic chinese take-out container, it's probably quicker and easier just to grab a whisk.

The third rule of making butter is: It involves a degree of messiness. 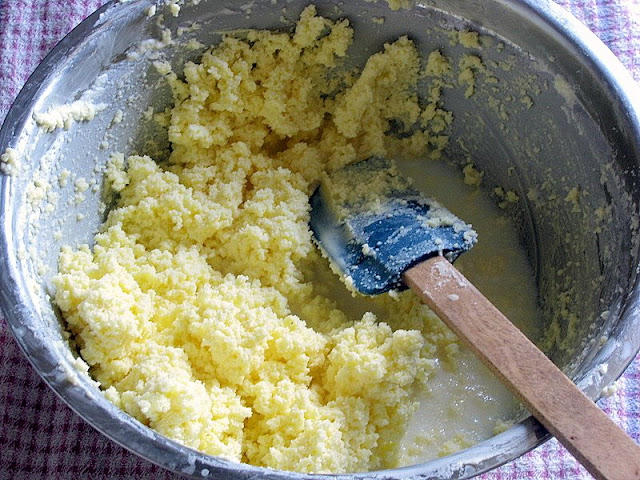 At some point it will separate - often quite suddenly - into tight, nubbly little curds, and thin, whitish buttermilk. At this stage you want to drain off the liquid - don't throw it away though, it can be used in baking, or soup, or you could actually drink it - and I found it pays to squeeze out the curds themselves into the receptacle for the buttermilk as they hold a lot of liquid.

At this stage, you cover the butter-to-be in water and knead it - that's right - then discard the water, repeating this until the water stays clear while you're kneading it. I understand this step helps to make it last longer.

From here you can keep the butter as is, or knead in some salt. In New Zealand 99% of our butter comes salted, it doesn't taste salty in the slightest, just a little...fuller. Nevertheless it's what I'm used to so it's what I did. Like all the hip young things these days, I too have some pink Himalayan salt (gifted to me by one discerning Santa Claus) which I carefully kneaded into the primrose yellow lump of dairy - about 1 1/2 teaspoons. Go easy at this stage because you can always add more salt later. 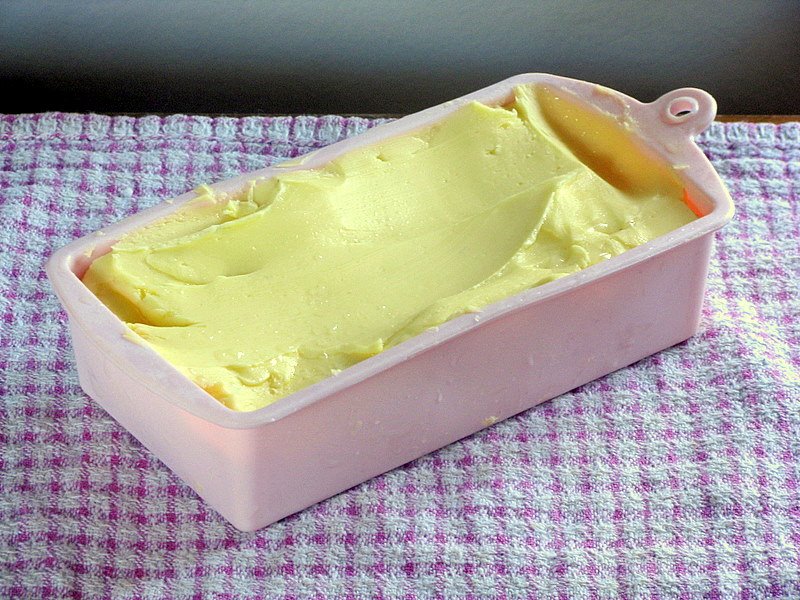 Cue the Halleluja chorus. Using only two ingredients - fresh New Zealand cream and Himalayan salt, I made actual butter. It's really that colour too - I don't know where all the yellow hides when it's in cream form, but you whip it up and suddenly it changes colour. That night I made scones using the buttermilk, and the taste of the butter melting slowly onto the tender scones was spectacular. Please note the adorable pink silicone container, which is actually a mini loaf dish, a birthday present from my aunty Lynn, as was the pink silicone mini heart which I used to make my couer-a-la-beurre at the start of this post.

So as you can see making your own butter is easy, so easy that you can make some and suddenly get an inflated ego and entertain fanciful notions of your blog being turned into a movie starring Hollywood heavyweights and indie flick darlings.

Speaking of things that are wildly important to me: If you happen to be in the vicinity of the good village of Otaua tomorrow, please visit the Mighty Otaua Village Garage Sale at the Otaua Village Hall (established in 1985!). This is by no means limited to people of Otaua, if you are from Waiuku, Tuakau, Pukekohe, any nook or cranny in the wider Franklin region, heck, if you're anywhere in the Waikato why not make a scenic trip down to Otaua. You can (a) scout out some ridiculously cool bargains in a recession-tastic manner, and (b) support a tiny village who are trying their best to fight against the ugliness of WPC Ltd who want, of all ill-conceived ideas, to relocate their waste oil treatment plant to Otaua Village.

If you can't make it to Otaua then why not shake your fist at WPC Ltd and the potentially devastating effects of their aims in a virtual way by watching the song on youtube that my father wrote (and videoed!) to protest their actions. For those of you that have been reading this blog for a while, this venomous typing will probably come as no surprise, but for those of you who are newcomers to this strange land, check out the Otaua Blog for the full rundown on the ignorance of WPC Ltd. Ugh, it's totally ruined my butter high just thinking about them - I'm typing all angrily, hitting the keys hard - I feel like I've just seen some margarine or something - so let's try to keep it positive: get yourselves down to Otaua Village for the sure-to-be-awesome Garage Sale.

It has been a busy week - on Monday Tim and I saw Dylan Moran (of Black Books fame) who was, despite being visibly weary as so many stars are by the time they get to New Zealand on their tours, deliriously funny. We were fortunate enough to meet him at the stage door afterwards, he said no photos but signed our ticket happily enough. On Wednesday we were at Bodega for Okkervil River, who were delightful, friendly, generous of encore. The venue, however, was troublingly warm. So warm that I could barely concentrate, let alone applaud. On top of that, work has been pretty manic and suddenly it's Friday already. Which is why I was glad to get home early and bunker down with some chicken noodle soup away from the cold tonight.
_______________________________________________

On Shuffle while I wrote this:

Next time: Well, Tim and I are both graduating on Tuesday, which is very exciting, so I may be relatively quiet until then. What happens after that is anyone's guess. Peace.
Posted by hungryandfrozen