Email ThisBlogThis!Share to TwitterShare to FacebookShare to Pinterest
Without wanting to sound like Kristy Thomas pitching for the Kid-Kit - do you remember when you were a child, and you went to a friend's house, and it was so much more of a heightened experience than your own existence at home? Their toys seemed cooler, they had a haybarn, they were allowed to stay up later, they called their parents by their first names... Sometimes there was the disquieting reverse of that where leaving home for someone else's affirms how comparitively safe you feel in your own space and how you just have to hold on and let the minutes pass until you can return - ah, childhood. I realise of course that I'm looking at this through the fairly priveleged gaze of someone who grew up with loving parents and so on.

But anyway, I have this distinct memory of being down the road at my then best friend's place, and her mum made us pancakes in the middle of the day for lunch. We ate them with sugar, lemon juice, whipped cream and - and this which I remember well over a decade on - leftover chocolate icing. For lunch. Have you seen Scarface? (I've been in the same room while it was on, which was plenty.) You know that scene where he's surrounded by mountains of cocaine? These pancakes-for-lunch with chocolate icing were like the equivalent of that for 9 year old me. But you know, somewhat less alarming. 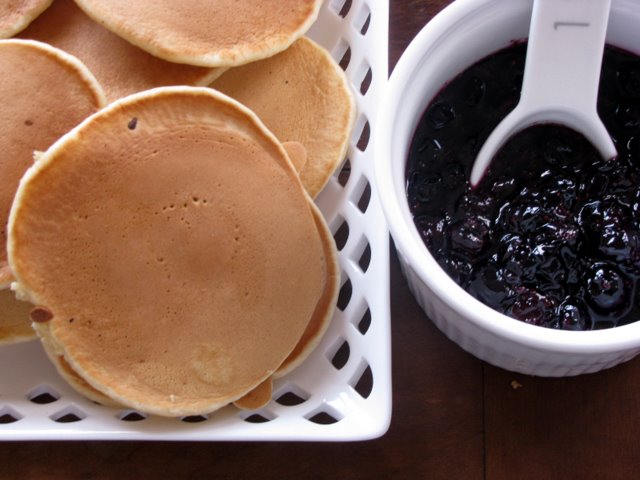 Living away from home means these childhood thrills can be recreated at your leisure and while it's obviously not the same, a decision to have pancakes for dinner still comes with a certain satisfaction, a feeling that you're Pippi Longstocking or something. Whimsy aside, pancakes do make a fantastic unconventional dinner - filling, cheap, easy to eat with the fingers, sociable, not too fussy. Tim and I decided it had been too long, too, too long since we'd seen Thoroughly Modern Millie (possibly I was the stronger force on this decision being made) and we invited our friend and fellow Thoroughly Modern Millie fan Ange over to watch it. For some reason the idea of pancakes for supper seemed amazingly delightful too - so that's what we had.


I used a recipe of Nigella Lawson's from Nigella Bites. I replaced the milk in the pancakes with soymilk to make them dairy-free and truly, these were the best pancakes I've ever made. I've made some sad, rubbery pancakes in my time and these reaffirmed my faith in the practice. They were fluffy, light, well behaved, quick to bubble, and a pleasing even nut-brown. I'd like to think it was the magic of soy that made this happen.

Beat all the ingredients together, or just blitz them in a food processor. Heat a good non-stick frying pan, add a little butter or oil, then get pancaking. You can make these as large or small as you wish - I kept them relatively small but do as you please. When you see bubbles emerging on the surface, flip them over and cook for a minute or so on the other side. I find a silicon spatula useful for this.

I piled them onto a plate covered in tinfoil and they kept perfectly happy until the mixture was used up, so don't feel you have to feed everyone but remain slavishly chained to the stovetop. Makes enough to thoroughly satiate three hungry people, could probably feed four really. Nigella reckons "25 pancakes the size of jam jar lids". 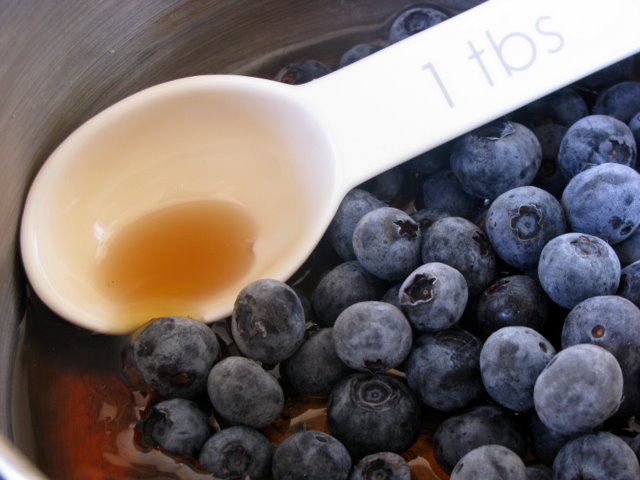 To go with I made the blueberry syrup from Nigella Express. Had some bloobs (as I've been calling them, not annoying at all!) that I found on special at Moore Wilson's and it seemed like as good a use of them as any, as well as making the pancake dinner seem like a bit more of an occasion. It took all of five minutes to make but tasted relatively complicated - what more can you ask from a recipe? 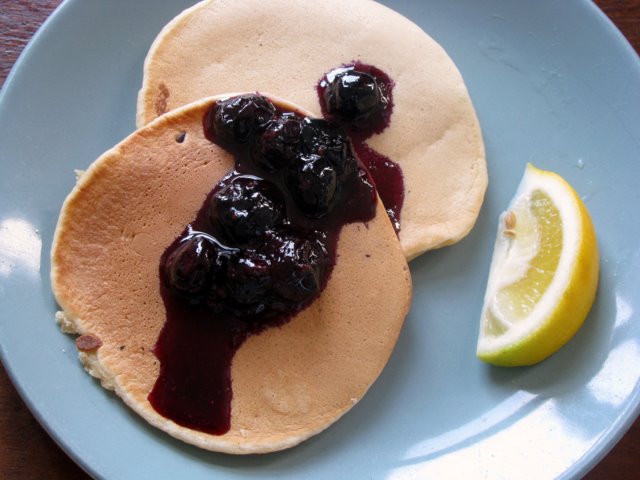 Not just for pancakes - this would be brilliant on vanilla ice cream and as Nigella says, it does become rather jammy the next day and is perfect spread on buttery toast.

Put both ingredients into a pan and bring to the boil. Let it bubble gently for 2-3 minutes then pour into a jug. Like so!

I can't afford maple syrup - not even with my shoes from The Warehouse and op shop sweaters - and I have a feeling that even if I had some I'd be too scared to use it. I'm okay with this, and used honey instead. I wouldn't recommend using fake maple syrup, as there's only two ingredients and blueberries are so beautiful that you don't want to be gumming them up with synthetic flavourings. 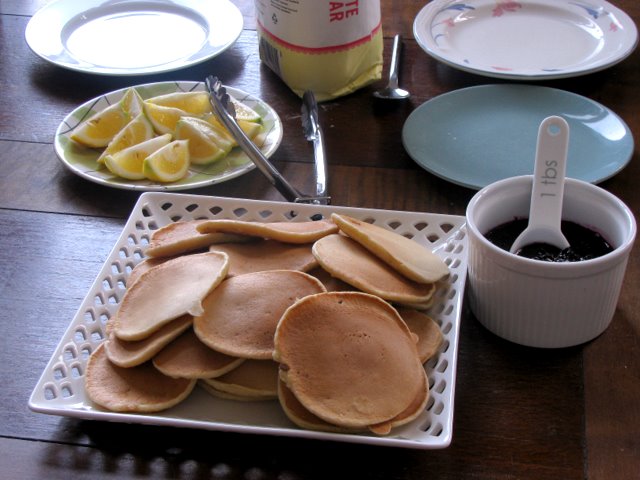 Ange provided the lemons from her bountiful tree. The pancakes were, as I said, pretty fabulous. The satiny blueberry syrup was gorgeous - thick and sweet and studded with juice-bursting berries. Thoroughly Modern Millie was reliably incredible. (Seriously. One of the best movies of all time, second only to A Mighty Wind.) It was a good night.

On Shuffle while I type:

Cornet Man by the superlative-worthy Barbra Streisand, from the Original Broadway Cast recording of Funny Girl. Bought this from Slow Boat the other day, had been meaning to for a long while and did not regret it. Her voice is just gorgeous, all rich and sinuous.

Tender by Blur from their album 13. I love this song so much and have since the moment I saw it for the first time on Video Hits back in 1998...actually I wonder if I saw it on MTV Europe? Maybe it was too late for that. Anyway, I don't really care if the lyrics are a bit appalling or whatever, it's such a lovely tune - it almost seems broken up into hooky compartments which come at you one after the other - and every time I hear it I feel all comforted, like I'm wrapped up in a woolly blanket.

Next time: I made these fantastic raw cookies the other day - it's not often I get enthused about the concept of raw baking but these were not only easy and practical, they were seriously good tasting. Once I get back to Wellington...you'll be hearing about them.
Posted by hungryandfrozen