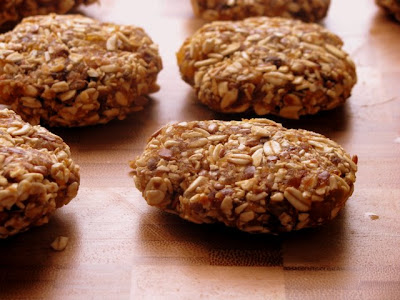 So, when I'm not making butter-and-golden-syrup sandwiches or having pancakes for dinner I enjoy the occasional dog-paddle through the chilled, unsalted waters of raw cooking. This isn't something I'd want to make a lifestyle of but it's fun to try new recipes. It can hardly be a secret that the less you do to vegetables, the better they are for you and I'm all for including more of them on my plate. I'm not so convinced by recipes that require half a bottle of agave nectar and a kilo of cashews sitting in a dehydrating machine for nine hours till it turns into some kind of cheesecake-esque creation - that doesn't seem quite right to me.


These raw 'cookies' are a particularly lovely example of this sort of carry-on - the ingredients are likely to be in your cupboard already and they're cheap if you don't have them. It's quick but involved enough to make you feel like you're doing something, and you can eat them as soon as you've made them. They're practical - energy dense and hardy - and also really, really delicious which is, I guess, a requirement rather than an eye-brow raising bonus with healthier recipes these days. I found this fantastic recipe on Gourmeted, but changed it up a tiny bit. The original was composed of dates and raisins but I swapped the altogether sexier dried apricots for the sad pinched little raisins. I added a tiny bit of liquid and included linseeds. You do as you wish.


Combine oats, linseeds and cinnamon in food processor and pulse until you get small pieces. Add dates and pulse well. You should have a thick/dense paste, but don't fear if it is still crumbly. Add a tablespoon of water if it's really not coming together at all, but the apricots will help. Add apricots and whizz to blend them through. I then just wet my hands, rolled small tablespoonfuls of 'dough' and pressed/squeezed them flat into 'cookies'. I say squeezed for a reason - the texture of this is a little different but they will work, trust me. 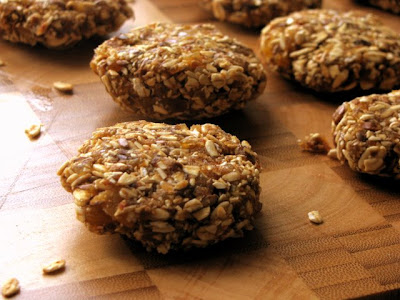 As I said, these 'cookies' are delicious - in their own right, not just in a "not bad for something without butter in it" kind of way. In fact they really deserve to just be called cookies, rather than being encased in patronising apostrophes. Be free from my sneering punctuation, cookies! They are figgily dense in texture, fragrant with apricot, and fantastically chewy. They make a perfect hurried breakfast, and probably would be brilliant with some roughly chopped dark chocolate included in the mixture. On top of all that they're a really cheap way of filling the biscuit tin.


Had been feeling a bit grumpy while writing this - waited for a phone call today that never arrived which meant I put off other things, wrangling with all manner of other things in the meantime, and finally ruining dinner - I somehow managed to oversalt the cooking water for the pasta despite every cookbook seeming to imply that no amount of salt can be too much. I persisted in eating it all the same so there wasn't any waste but feel a bit like a preserved lemon now. Coupled with the inevitable post-Laneways-blahs, it'd be easy to feel sorry for myself and snap at people for the sake of it. Let us instead relive the happiness of Monday's shenanigans...


Monday was Auckland Anniversary Day, which unfortunately isn't recognised as an official holiday in Wellington. So it was with a day's annual leave clutched tightly in my hands that Tim and I attended the inaugural Laneways music Festival at Britomart. The day was exceptionally relaxed, with the intentionally small audience moving like schools of fish between and around the two stages. The brilliance of the lineup became more and more apparent as the day went on. Highlights included...

- the mellow, be-caped stompiness of the Phoenix Foundation.
- seeing Chris Knox emerge from behind a fence to watch the Black Lips with the rest of the audience.
- Daniel Johnston's entire set, punctuated by a rather joyfully sung-along rendition of You've Got To Hide Your Love Away. Nearly had wobbly tears in my eyes till I recognised someone with a similar look on their face and checked myself for being an unnecessarily sentimental git.
- Realising I knew more Echo and the Bunnymen songs than I initially thought.
- Florence Welch. She was almost a lowlight - so gorgeous and long-legged, must she have this gloriously swirling voice tucked in her throat as well? I've never, ever been into acrobatic female vocalists (Well, I did and still do have a soft spot for Mariah Carey but she's different) - have always been resolutely unmoved by Beyonce or Christina Aguilira, and any of those dime-a-dozen introspective bores that appear on Grey's Anatomy - but listening to Florence live made me realise how thrilling seeing someone belt their face off could be. To any of you out there who have seen Idina Menzel or Julia Murney singing live - my envy grew tenfold after Florence. 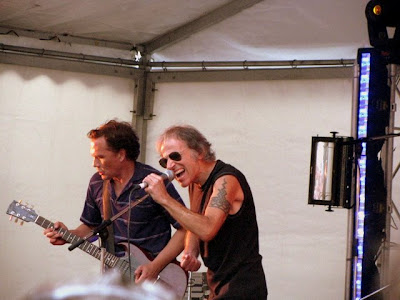 Above: Chris Knox flanked by the always elegant Shayne Carter. They performed a swift but crunchily powerful set which was, not forgetting the fact that Knox suffered a stroke last year, pretty marvelous.


The day was made easier by the fact that the "Friends and Family" area had much nicer toilets, chairs and shade, plus no queues to get a bottle of water or beer. The only real frown-inducing thing about the day was my uncanny but unfortunate ability to get stuck behind the person in the audience who insists on smoking. I can't even understand why someone would think everyone directly around them wants to breathe in poisonous smoke as well. All I could think the whole time was "there's no safe level of exposure to cigarette smoke." But on the whole the day was utterly smashing and not much apart from that troubled me. Oh wait. There was the crowd of girls behind me who insisted on shriekily singing along with Florence at great volume. Sounds simple enough, even curmudgeonly on my part, but it's the sort of thing that after a long day makes you want to push someone into a swimming pool. A bit like the smoking thing - what made them think I paid to hear them sing? That aside, am already anticipating what untold joys next year's lineup could bring. Laneways - I think you really need a round of applause.


The night before Tim and I went relatively spontaneously to "Dig Deep" at Fubar, the proceeds of which went to aid Haiti. It was a very good night, in particular Tourettes' set; but between that and Laneways I'm now feeling like the pasta we struggled at dinner - limp and overly saline.

Title brought to you by: Bob Dylan's Masters of War from The Freewheeling Bob Dylan. The lyrics really bear little resemblence to quietly making cookies, or maybe they do - he's pretty deep, that Bob Dylan.

Dance My Pain Away by Rod Lee from The Wire:...And All The Pieces Matter. There are few soundtracks I'll seek out (cast recordings, different story) but this is such a perfectly structured gem. We are inordinately excited about the approaching release of Season 5 on DVD. The tourism guide books will tell you that New Zealand is a fabulous place to live and raise a family and it may well be; it's a terrible place to wait for a DVD to be released. We are always woefully behind.

You Got The Love by Florence and The Machine from her aptly titled album Lungs. When you first hear this cover you might think "hmmm, prosaic enough" but then it gets all swirly and wonderful. Less swirly but no less special is the XX remix which was put over the loudspeakers once the XX finished their set - was great fun watching everyone who'd diligently waited for Daniel Johnston on the other stage getting panicky that Florence was making an unexpected early cameo.

Next time: I bought some wonton wrappers! They're much easier to get your hands on than they sound, and made some potstickers which miraculously turned out perfectly and were ridiculously good. It's Waitangi Day this Saturday, and because it's a Saturday PLUS a public holiday it's like, quadruple guaranteed that Tim will be making coffees for people but I'll probably traipse out to One Love anyway, sounds like it's going to be an excellent day...
Posted by hungryandfrozen