My nana is seriously fantastic. She's the only person in my life who will txt me to say that RENT is on TV and that she's going to tape it, while also being able to identify buttonholing and stitching on a opshop dress of mine as dating it back to the 1950s. She was one of the very first readers and supporters of this blog back in 2007 and has always been a positive presence in my life. As if all that weren't enough, a while back she commented on a tofu-centric post on this blog with Tofu "Balls", a recipe she "used heaps over 20 years ago." 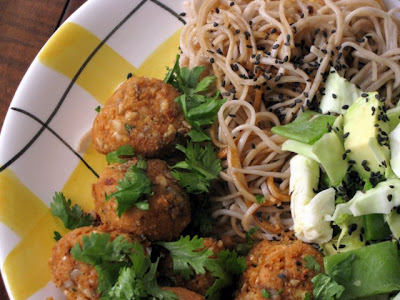 I guess the title isn't overly inviting - anything with inverted commas seems a little hesitant. That said, these literally are balls of tofu - just because there's not any meat doesn't make these any less, erm, ballsy, so there's no need for them to cower behind quotation marks. Amusing thought they may be. 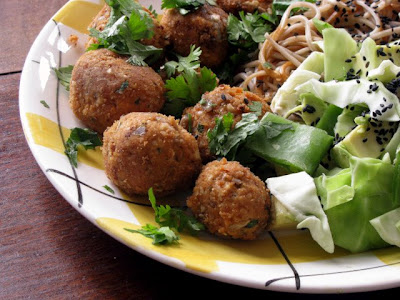 All hesitancy aside, they're really, really delicious. I did kind of tweak the recipe - I love tofu, I love rolled oats, but I don't think I can face them together. The combination belongs back in the shadows of "over 20 years ago"...for everyone's sake. That said, if you're game, then certainly go ahead and use them instead of the breadcrumbs/ground almonds.

With thanks to Nana for the heads-up.

In a food processor, mix the following till a crumbly mixture forms.

1/2 cup chopped peanuts or cashews
1 finely chopped onion
2/3 cup soft breadcrumbs, or 1/2 cup ground almonds
1 egg (optional - leaving it out makes these vegan)
2 tablespoons chopped fresh basil
2 Tablespoons Shoyu or soy sauce
1 block firm tofu (I used half, or two squares, from those four-packs of firm tofu you get from the vege market)

Roll into balls, not too large - about the size of the old 50c pieces, or a walnut. The second time I made these I rolled them in ground almonds which was rather nice, but the world won't fall apart if you don't do it. Heat a little rice bran oil in a wide pan, and cook till the balls are crisp and browned on all sides.

Nana also recommended a sauce made by bringing peanut butter, lemon juice and water to the boil in a pan while stirring with a spatula, although I imagine any kind of dipping sauce you have to hand would work with these - chilli sauce, for example... 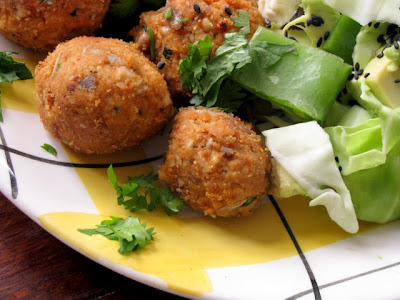 Forget your fear of tofu and maybe your further fear of well-meaning vintage recipes involving tofu. These are so good! A crunchy without, nutty and mouthfilling like peanut butter within. The tofu has a really lovely fresh flavour which balances out the richness of the nuts, but the softness of the texture means that they really slow you down - which is why you don't want to roll them too large. They went brilliantly with a crunchy green salad of sliced cabbage, sugar snap peas and avocado, plus soba noodles, slippery and cool with sesame oil and soy sauce. Because tofu is so awesome and kind of holds everything together you can afford to toy with these as you wish. If you wanted to you could also add into the food processor a number of ingredients...sesame seeds, tahini, sunflower seeds, lemon rind, chopped ginger, garlic...As well as being a very filling main meal, you could make them even smaller - like bonker marble sized - and serve with toothpicks and a variety of dipping sauces at your next soiree.
Busy times lately - Tim and I spent both Thursday and Friday night at the cocoon of body heat that is the San Francisco Bath House firstly to see Brooklyn - as in New York - band Dirty Projectors, then local sensations Mint Chicks last night. Dirty Projectors have this unusual, intriguing sound - kind of minimalistic, with wonky time signatures, chunky drumbeats and flutey harmonies that take the role of instruments in places. Occasionally the sound got a bit repetitive, (and all those "ehhh-ohhhs" make me think of the Tellytubbies) although if I could sing like the gorgeous ladies in the band I'd probably do the same thing over and over too. They all looked really happy though which tends to endear me to performers, and damnit if I haven't been humming the stunning No Intentions constantly. I'm glad we went and saw them - there's some extraordinary talent within the band, I just wonder where they're going to go from here with their sound. Two of the Dirty Projectors. They looked so young, and for some reason the more the girl on the left - the main female voice - belted, the younger she looked...
The Mint Chicks' set last night was fantastic although so loud that I occasionally felt nauseous. A compliment? More than any other local band I can think of they always feel like A Big Deal whenever they roll into town. That said, the audience - largely composed of new-in-town or returning students - seemed a little disengaged. Like the couple who spent 90% of the time pashing extensively next to me. Why even leave the house! Hopefully it was a good experience for the Mint Chicks themselves, they all looked completely impassioned while onstage but who could know? The sound quality seemed decent, so the scrawlyness of their music translated really nicely into a live setting and didn't turn into a incomprehensible blur of noise. Their older songs sounded as brilliant as ever and their newest track Bad Buzz was maybe my favourite moment - it's such a ridiculously fantastic song as I clumsily tried to explain here. I hadn't seen them live since 2006 so it was wonderful to catch them again, hopefully they stick around and keep on creating...
________________________________________________________

Music to blog by:

The Dirty Projectors' No Intentions, as above, from their album Bitte Orca. See? Intriguing! Hummable!

I Cut Like A Buffalo from the Dead Weather's debut album Horehound. The music video for this is compelling stuff. I hope sincerely that Jack White recreates that dance on stage when we see them live on the 17th. I don't think I'll be that functional on the 16th. 2005 seems a long time ago.

Next time: we're having a combined Wellington Phoenix pre-game get-together/Rod Stewart Appreciation Day thing tomorrow (long story...actually no, that explains it all really) which I'm catering (self-imposedly) and the menu is growing more and more dizzying in proportions...no doubt I'll have plenty to blog about. Like Nigella's Girdlebuster Pie. Do you not want to know more with a name like that?
Posted by hungryandfrozen