i've bean waiting so long, to be where i'm going

Email ThisBlogThis!Share to TwitterShare to FacebookShare to Pinterest
Have I got a relatively exciting bean salad for you. Bean salad in and of itself isn't all that thrilling, but compared to other bean salads this one is pretty special. Aaand I think I've used up my quota of saying "bean salad" just there. It was never something I sought out as a kid, although it's not like my tastebuds were all that sophisticated - mind you neither is bean salad. I do remember eying it up at the deli counter of the supermarket. It looked dubious, a pile of small brown and green pebbles bathed generously in a tub of watery vinegar. This recipe is neither dubious nor watery. It's verging on sexy. Again...relatively. 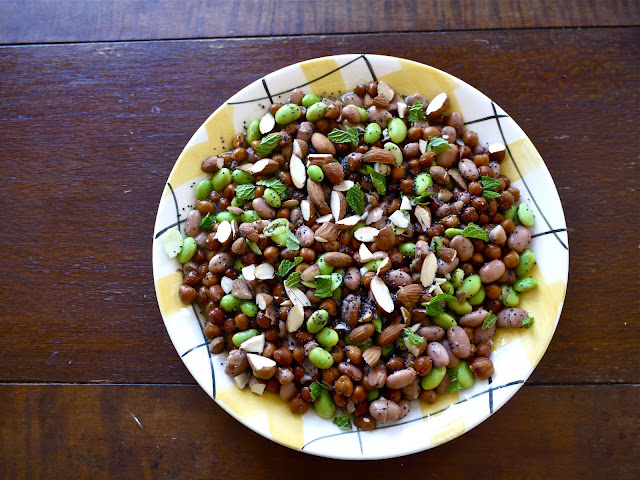 I found it while searching for something else entirely on Cuisine's website and was tangentially inspired, thinking it would be an awesome summer dinner - filling, fast, cheap, oven barely required. As I've veered well away from the original, you too can muck round with the following recipe. If you want to use cannellini beans or whatever, no worries. If you want to use more than three kinds, be my guest. If you want to use lemon juice instead of cider vinegar because that's what you've got, then you're more than welcome to. I included the avocado oil and nigella seeds because I got them for Christmas (thanks, Mum and Dad!) but also because I wanted their respective mellow richness and subtle oniony kick. However you use what you like. As long as there's some form of bean involved, otherwise...you're not even really making this recipe at all. 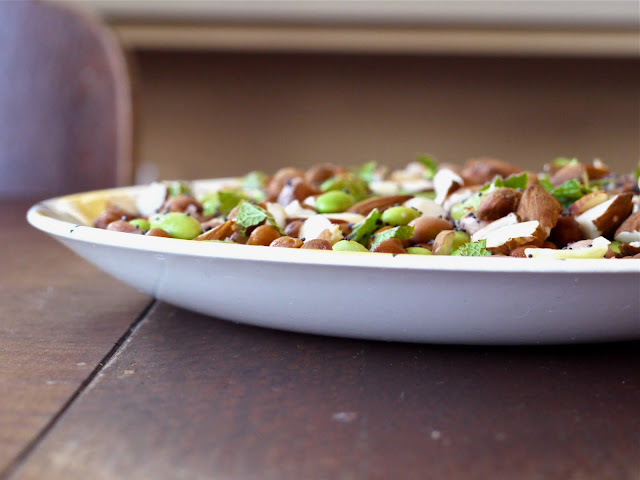 Inspired by this recipe by Fiona Smith from Cuisine magazine.

1 can borlotti beans
1 can chickpeas (I found some super intriguing red chickpeas on special, but regular is obviously fine.)
Roughly 1 cup frozen edamame/soybeans (I say frozen because I presume that's how you got 'em) You could use frozen peas or broad beans instead.
Handful of almonds
Mint, to serve

Cook your soybeans in boiling water - I tend to throw the beans and the water in the pan at the same time so they all heat up together, as I imagine it'll shave a couple of minutes off the cooking time. Drain and refresh under cold water. In a hot pan - you can use the same one once the beans are drained - briefly toast the almonds, and then slice up roughly.

In a large bowl, whisk together the oil, the vinegar, and the honey. Tip in the poppyseeds, the garlic, the nigella seeds if using and a pinch of seasalt (or a small pinch of regular salt) plus some pepper if you like. Whisk again. Drain the two cans of beans from their creepy can-liquid, and tip into the bowl of dressing along with the cooked soybeans. Using a spatula or large spoon, carefully fold the lot together so that everything becomes properly covered with the dressing, but none of the canned beans get too crushed.

Transfer into the bowl you're going to serve it from, and top with the almonds and the mint. Or just add both to the bowl you've mixed it in if you want to save on dishes. 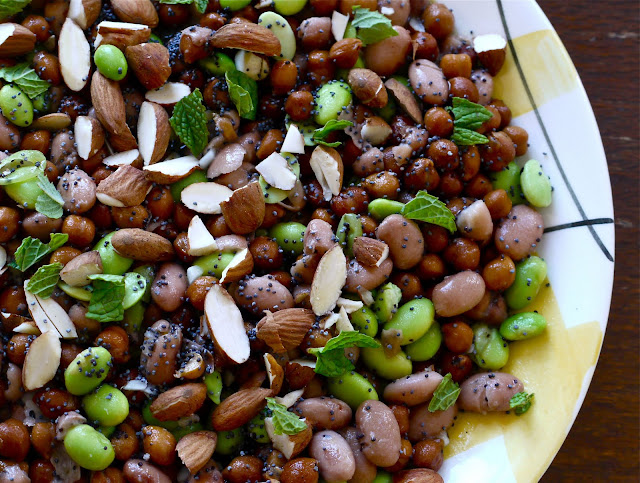 This salad is brilliant - light, filling, flavoursome, and kinda pretty as far as bean salads go. There's something texturally satisfying about the combination of soft canned beans and the bite-ier, nutty green soybeans. The dressing also pleases, with its balance of sweet, sharp, salty, rich, and crunchy, and soaks flavoursomely into the otherwise mild beans. The almonds and mint are really just there to make it seem more exciting (something about a plate of beans doesn't seem like anyone's first choice) but contribute in a way that you'd want them there every time.

This made enough for dinner alongside some brown rice and sliced, fried zucchini, with the leftover rice stirred into the beans to take for dinner at the Botanic Gardens. It was night one of the ASB Gardens Magic and we saw the wonderful Nudge (standing in for the Thomas Oliver Band). It started to rain about ten minutes into their show but we stuck around and had a fantastic night, first watching people dance round in the rain and then joining in ourselves.

Speaking of rain, but in more horrifying quantities, the dreadful flooding in Australia has been on my mind a lot. The number of deaths seems to rise like the water itself, and it must be awful to have everything you know just...underwater. For what it's worth, my heart goes out to everyone affected by it (including all the animals), and I hope this land of extreme weather settles down soon.

Having finished my first week back at work (hitting the ground at a brisk canter, this is a busy time for us) I can only conclude that my heart and brain are both at the beach. Feels like a squillion years ago that the most taxing decision I had was which book to read (answer: Donna Tartt's The Little Friend, Witi Ihimaera's Tangi, a tribute to Jennifer Paterson, and half of Graham Greene's Brighton Rock.)
__________________________________________
Title via: Gotta say, when I started typing this up I thought "ha! There must be sooooo many songs that use the word 'been' which I can twist for my purposes." But with my aforementioned brain at the beach, Sunshine of Your Love by Cream was all I could think of. It's a mighty fine song, but I know there's something better out there. Hopefully for all of us my brain returns to its rightful location soonish.
__________________________________________
Music lately:

The aforementioned Nudge. They crop up here and there in Wellington and are fantastic live, all three members being fearsomely talented and easily watchable.