Twitter briefly: a website where you log in with a username and deliver thoughts, or news commentary, or links to other content in 140 characters or less, as well as following people who do the same, and potentially re-share - with acknowledgement - those people's content of the aforementioned nature, people who may include verified celebrities, celebrity parodies, companies/brands, and people from other cities that you don't know but whose blog you really like. If you suspect it's not for you then you may well be right, and that's fine. Me, I love it. 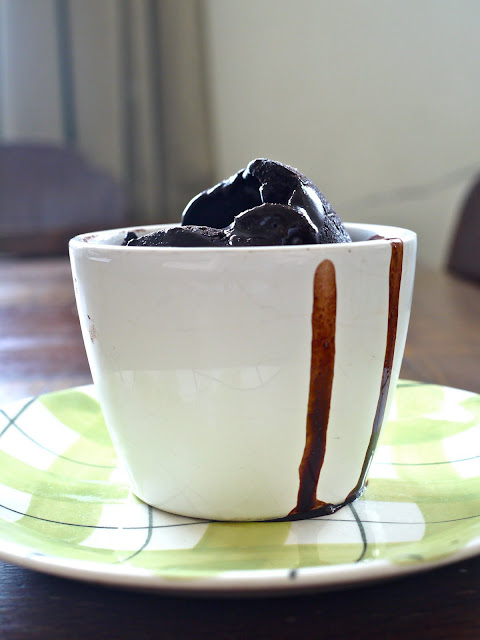 My already cement-thick adoration for Twitter was further set into steadfast concrete last week. I'd been wanting to make Chocolate Sorbet for a long time now and not having a recipe, I asked my followers whether or not anyone had made it before and if they had any stories to share. Through one person replying and including someone else's Twitter name (yeah, talking about Twitter outside of Twitter can sound cringey), and that someone else happening to be Giapo, the extremely busy-with-good-reason gelato shop on Queen Street in Auckland. I ended up procuring a stunning recipe for Cocoa Sorbet because Giapo - whoever does their tweeting - delivered it to me via Twitter. Told me I only needed cocoa, and asked for the fat content of said cocoa in as caring a manner as 140 character tweets can convey. Kindly told me to go ahead and share the recipe here, that there's no intellectual property on what they do.

Well, it would've been churlish not to after all that effort. Luckily it tastes incredibly stunning, as it should - this recipe uses 200g of expensive cocoa. I trusted Giapo since they make their living from ice cream-related things, but I was still pretty wary, because it felt almost terrifyingly reckless to tip that much cocoa into one bowl. The point is, this recipe only has three ingredients, cocoa, sugar and water. The cocoa flavour will shine, so...it needs to be good stuff with around 20% fat content. I use Equagold, which comes in 300g jars and has 21% fat content. This does make it an expensive recipe, however the other two ingredients are cheap and free, respectively, and it's not like you're paying for eggs, cream, or chocolate. But still. Been warned. 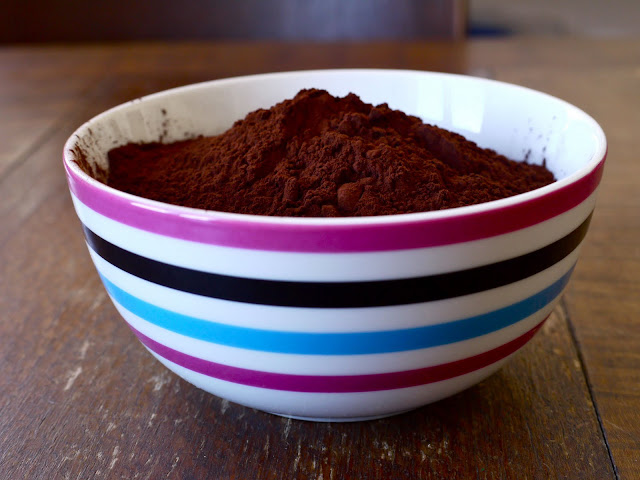 Recipe provided with thanks and acknowledgement to Giapo.

Bring your water to the boil in a pan. In the meantime, in a large bowl, measure out the cocoa, fan yourself at the amount needed, move on, and measure out the sugar into the same bowl. Important: stir this (I used a small whisk) untill the cocoa and sugar "are one and the same" in Giapo's words.

Turn off the stove when the water has boiled and pour it carefully into the cocoa and sugar. "Stir, stir, stir" said Giapo - you want this to become a thickish, dark syrupy liquid with no errant cocoa lumps. This is called a cold hot infusion. Allow to cool, then pour into a container and freeze. Every couple of hours go back and whisk it or stir it to break up any ice crystals. Allow to defrost a little before you try and eat it. 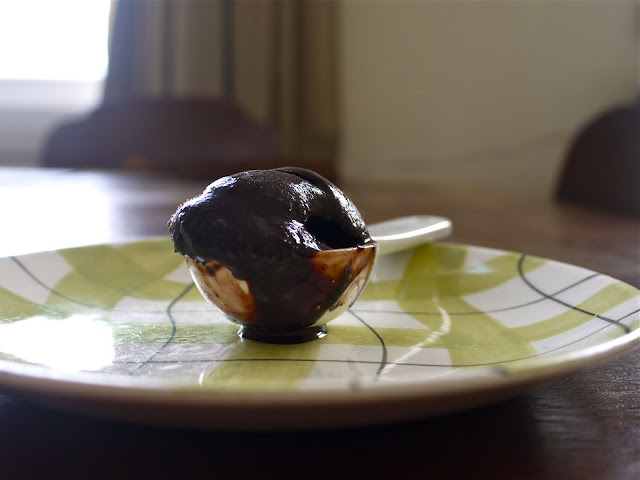 With that much cocoa in it, so light-absorbing and chocolate-ful, this recipe had to taste decent. However I was still nervous when I first rolled my spoon across the surface of the sorbet. But: it was actually amazing. The cocoa flavour is unsurprisingly strident, and while there's the necessary sugar to stop this being a throat-clogging, inedible paste, the cleanness of the water allowed the pure, heady, earthy cocoa flavour to be the star. 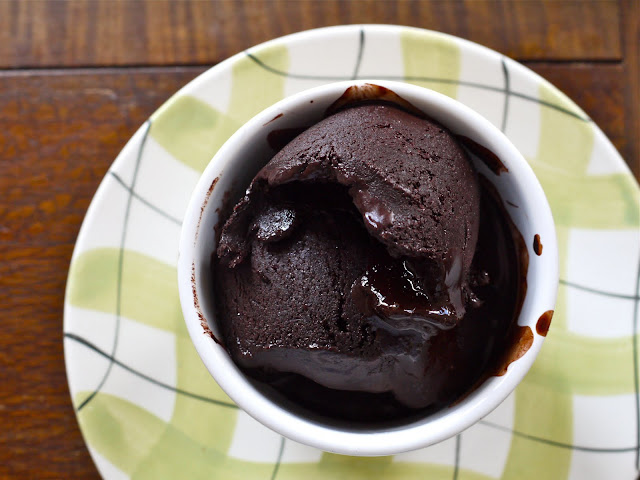 Without the (admittedly delicious) mellowing of any cream or custard this made for a fairly intense eating experience. A smallish portion satisfies with its aggressive cocoa-ness, but it's easy to keep going. Truly, truly delicious stuff, I absolutely recommend it. The only thing I would change - with all due respect - is to maybe up the amount of water to 750g. While the cocoa itself provides quite a lot of bulk, I feel that the mixture can handle being extended a bit, which also makes it go further and therefore helps justify the use of that much cocoa. I also figure that, if you've only got regular cocoa, you could maybe use just 100g of it, and roughly chop up 200g very dark chocolate and stir it in with the cocoa and sugar.

Hey! Exciting news! As if cocoa sorbet wasn't enough: Tim and I are going on holiday in April. Our first holiday together...ever. To London. And Berlin. And somewhere in Poland, once I remember if I preferred Krakow or Warsaw better first time round. And on our way back to New Zealand we're spending two nights in LA. That's LA, AMERICA! As soon as Tim told me that he jacked that stopover up at the travel agency, I can half ashamedly/half defiantly tell you that the Baby-Sitters Club Super Special "California Girls" was the first thing that sprang to mind. By the way, the reason I'm disproportionately excited about going to America is that I've never been there, whereas London/Berlin/Poland is a re-visit. This is pretty massive for Tim and I - while we met over in England (him from Wairoa and me from Otaua, haha) the last time we stepped foot in an international airport was when we got back to New Zealand in December 2005. We're now, in 2011, finally scraping ourselves into a position financially to be able to travel. We are SO EXCITED. And we're going to book tickets for Wicked in London! I'll finally see it - admittedly not with an Idina Menzel or a Julia Murney in the cast - but still. It has been interesting to love a musical to the point where my feelings have evolved into a kind of "how very 2007, and isn't it a flawed story" fondness without ever having seen it live...but it will be even more interesting to just see it for real. So we're trying something that I've called "nil by purse" where we basically don't spend any extraneous dollars. It'll be like back when we first moved in together, except now we've got an exciting endpoint other than just surviving.

So, since it's nearly six years since I've been to London, Berlin and Poland, and since all I know about LA comes from things like the Baby Sitters Club and music videos, if anyone knows any cheap-but-awesome places to eat, or if anyone would like to (but not in any way be obliged to, because that's just awkward) provide a couch or a floor for two extremely nice New Zealanders to crash on, or know of any amazing things to do and sights to see, then please share your knowledge! (and feel free to email me at hungryandfrozen@hotmail.com.)

Emily 2.0 by Wellington's Mammal Airlines from their EP Life of Mammals which you can seriously download for free. I love their music, they deserve to be huge with fuzzy catchy goodness like this.

Next time: It has been a while since I've been on here, mostly because I was up in Auckland working at Big Day Out, which takes some recovering from. I'm working on more frequency though. Next time there'll probably more skiting about our upcoming holiday. Also, more relevantly, a recipe for blackberry fool.
Posted by hungryandfrozen