it's all so sugarless

Email ThisBlogThis!Share to TwitterShare to FacebookShare to Pinterest
I once read that Brian Wilson of the Beach Boys went through a troubled stage where he ate half a birthday cake every day. With all due respect to Wilson, I'd happily eat a whole birthday cake every day and I'm fortunate enough to not even be feeling particularly troubled at the moment. If only cake had any nutritional value. I know - want, want, want. A solution of sorts - there's this recipe for vegan banana bread on the gorgeous Savvy Soybean blog which turned my head. Last week, with bananas rapidly browning in my fruitbowl, I got round to making it. Oh yes. It's another post where I semi-patronisingly assure you that a vegan recipe tastes pretty good, even though it contains no butter.

But really. This banana bread is delicious stuff and you expend hardly any energy while making it. The finished product is really quite good for you especially if you can get your hands on the agave nectar, which somehow manages to be sweeter than sugar but with a much lower glycemic index. What an overachiever. Most important: it tastes so good. 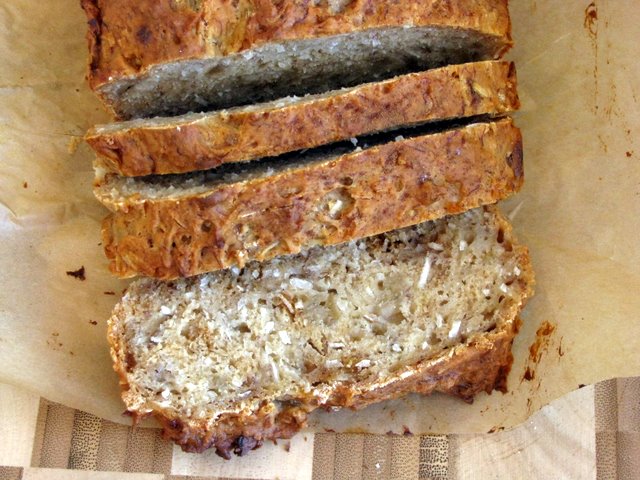 Recipe adapted from The Savvy Soybean


Set the oven to 180 C and line a loaf tin with baking paper. Then, very simply, mix together the bananas, applesauce and honey, then fold in the dry ingredients. Don't overmix. Turn the batter into the tin and bake for one hour. Pa-dah! Applesauce can easily be made by simmering one large, diced apple in 1/2 - 1 cup water for about fifteen minutes (keep an eye on it, it may need more water added) before roughly mashing with a fork. The original recipe included 1 cup chocolate chips which I didn't have, I'm sure they'd be an amazing addition but it was delicious without all the same. 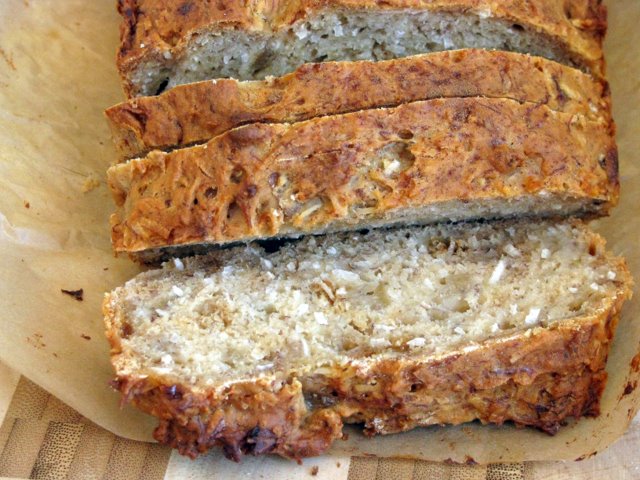 The bananas, applesauce and agave nectar or honey keep this moist and light. Combined with the cinnamon, this will fill your kitchen with a proper, comforting, wish-I-could-bottle-it baking fragrance. It keeps for ages and is very easy to slice. While it's lovely as is - okay, a little chewy as opposed to straightforwardly cakey - it really comes into its own when toasted in a sandwich press. These warm, crisp slices of banana bread are brilliant with sliced plums and maple syrup any time of day, or with any other fruit really, plums is just what I got right now. It is, in fact, so very good toasted that next time I make this I might just slice it, bag it up and freeze it for whenever I require a slightly puddingy snack (which is often...really often).

I've been feeling a bit lethargic and brain-heavy lately - like I need to take a whole day out and just sleep before I can get on with everything properly. At any rate, I'm definitely going to need my energy this month - I'm seeing the wonderful Amanda Palmer at Bodega on the 12th (tickets here!) and then on the 17th Tim and I will be getting up close and personal with Jack White at the Dead Weather concert at Powerstation in Auckland. It's been five years since we saw the White Stripes at Alexander Palace in London and while both of us are all "make new music together already, Jack and Meg" the Dead Weather is still a very, very anticipation-worthy engagement. Maybe eating more vegan banana bread will help perk me up?
____________________________________________________

Title comes to you via: Hole's Celebrity Skin ("it's all so sugarless, hooker-waitress-model-actress, oh just go nameless," I mean really.) Although the Spice Girls had my heart, I wanted to be Courtney Love so badly after MTV Europe came to New Zealand TV for a few brief but heady months. If I'd had a disposable income in 1998, there was not much I'd have wanted more (apart from a Spice Girls polaroid) than to lunge around the place wearing floaty dresses, with flowers in my hair and sparkles stuck on my face, holding a guitar. Actually I still do, let's be honest.
____________________________________________________

Music to cook to:

I found Miss World while trawling through Hole music videos. Forgot how much I love this song. I think I'm going to be buying some Hole albums.

Going to DC from Gavin Creel's album Goodtimenation. I love love love Gavin Creel but to be honest this album doesn't get played an awful lot, I just haven't really connected with it. This song is the exception...I love how it's all bouncy and adorable and ska-ish. And involves Gavin Creel.

Next time: I made this 'tofu balls' recipe of Nana's which was wackily delicious, and even though it sounds dubious I'm pretty sure I'm going to share it with all of you too. It will either be that or the coffee ice cream that I made this weekend with rapturously good results. Or I'll be too busy eating cake to post again...
Posted by hungryandfrozen